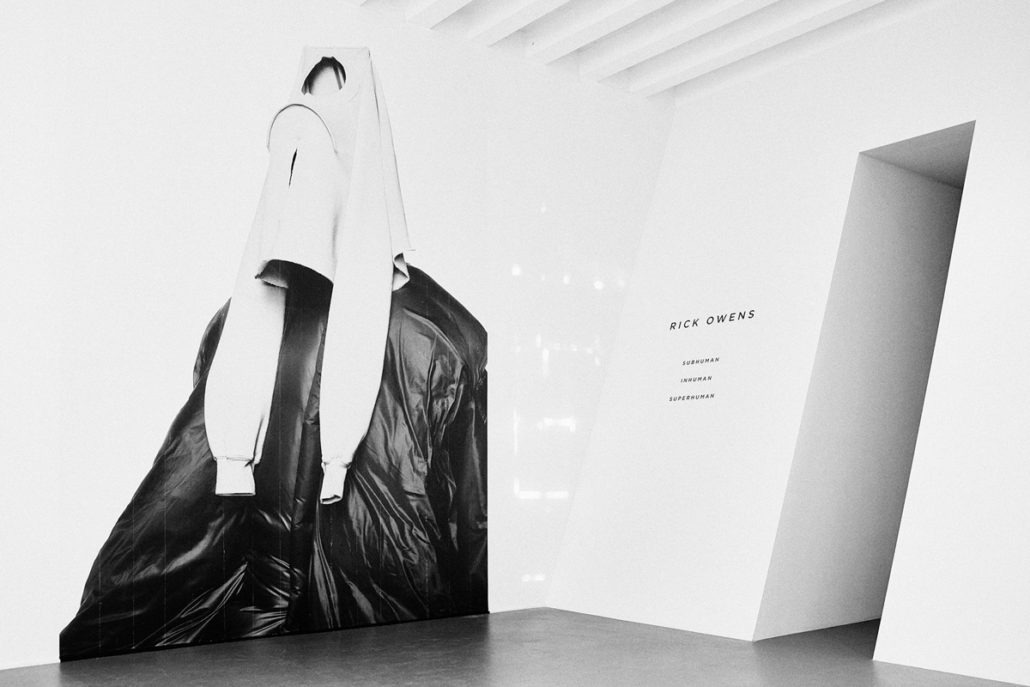 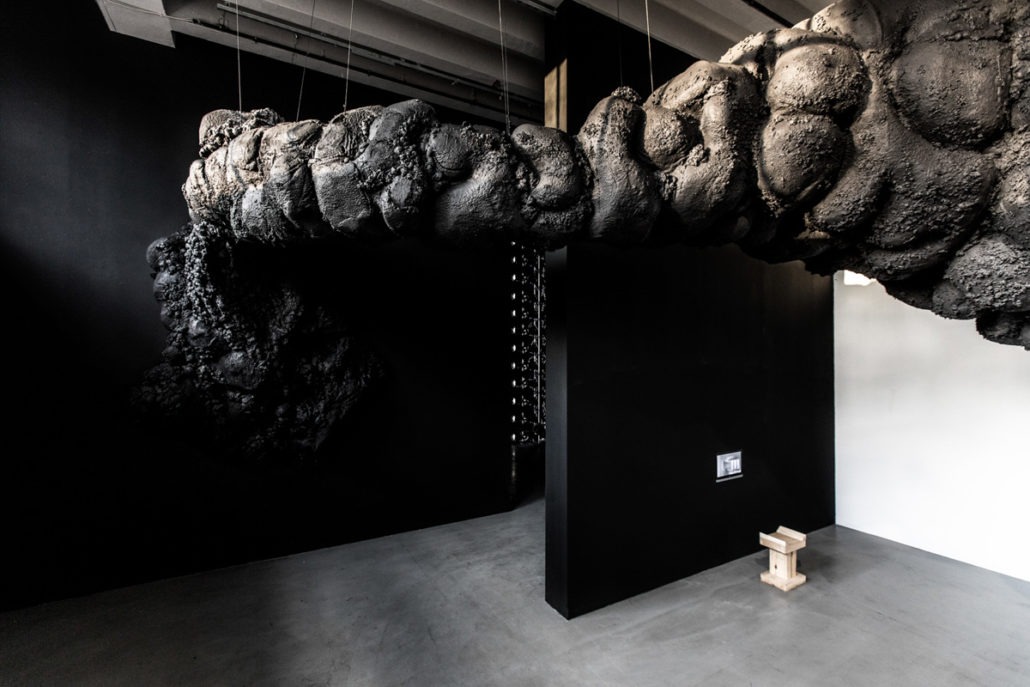 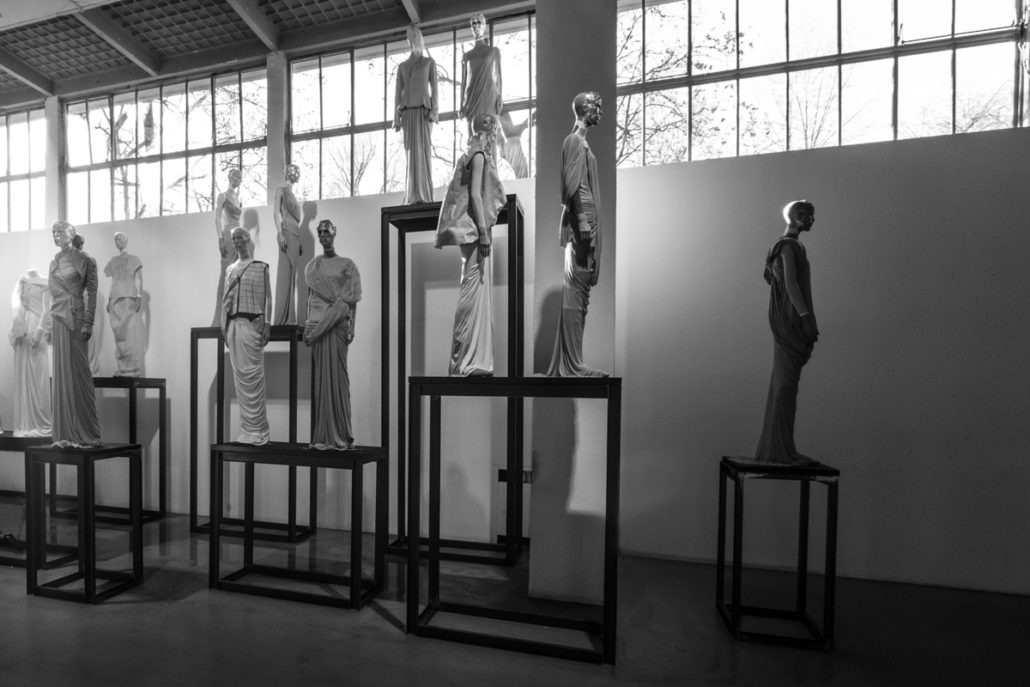 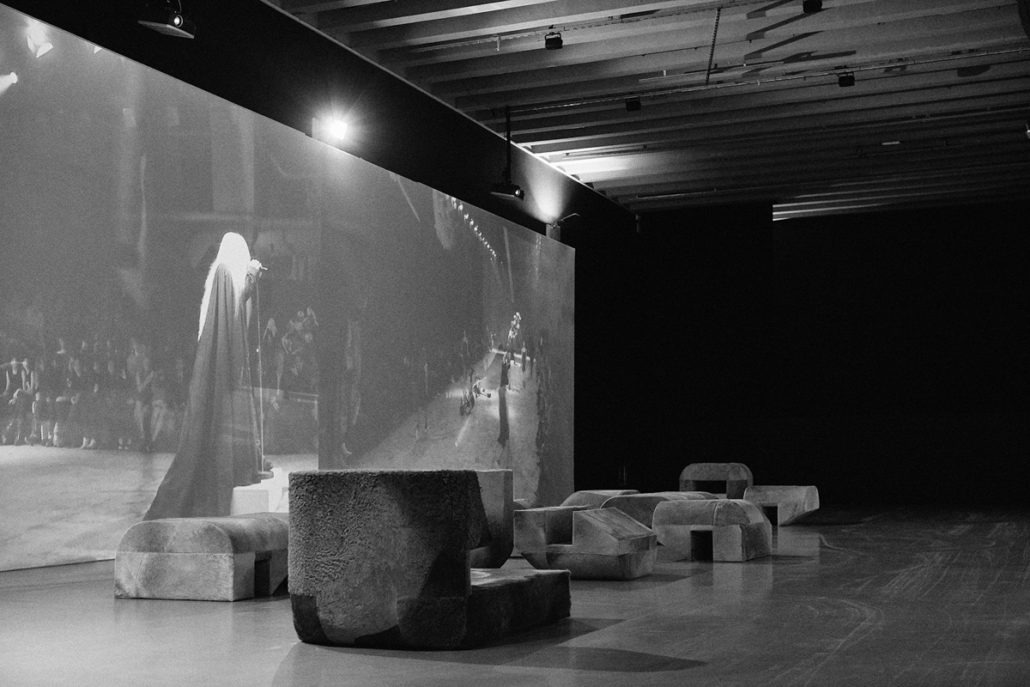 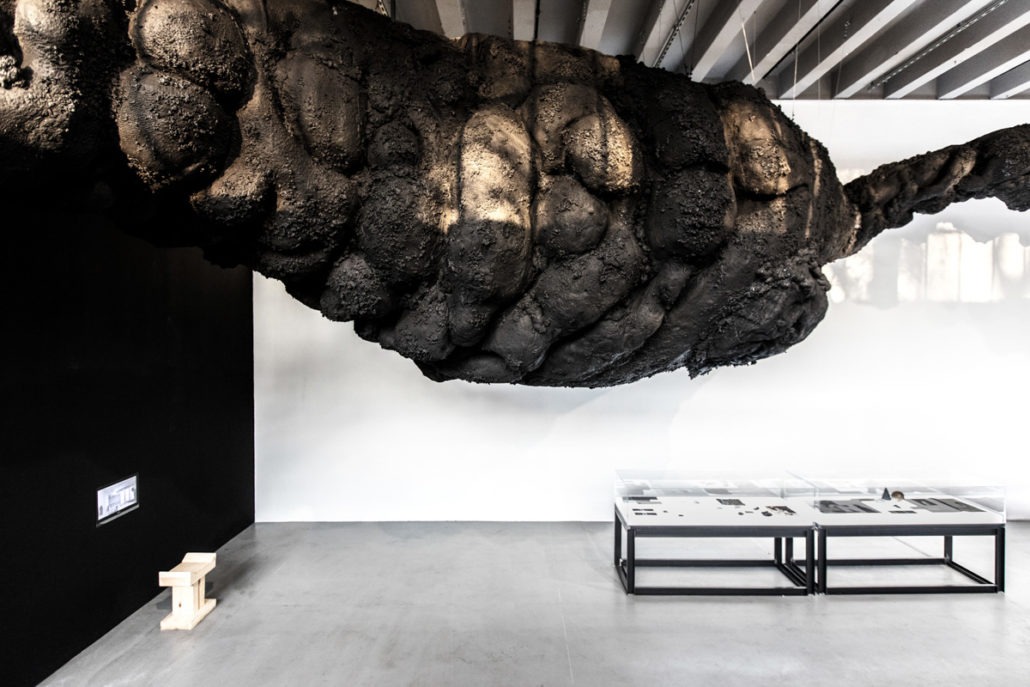 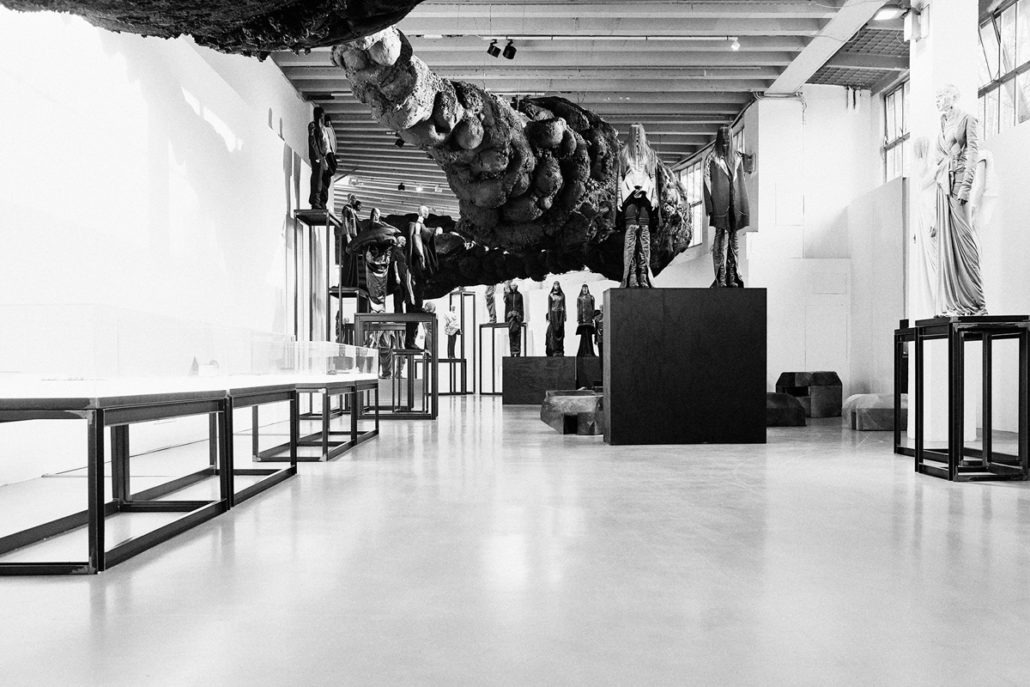 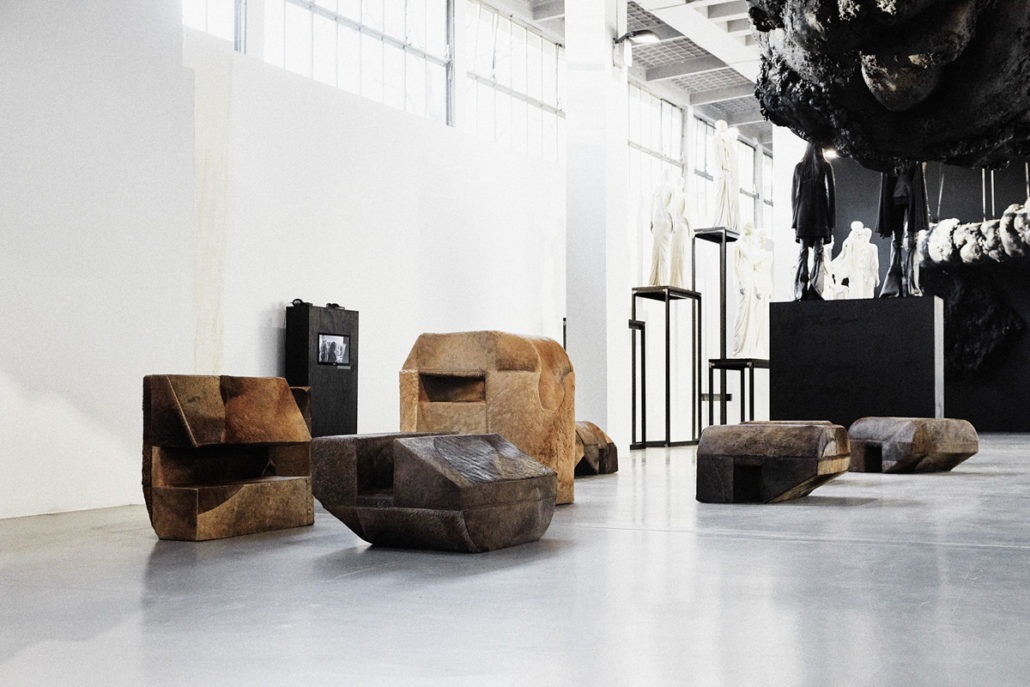 The press conference and exhibition tour for Rick Owens: Subhuman Inhuman Superhuman, a retrospective of the designer’s oeuvre in Milan’s Triennale museum, was held in Italian: a language that I, sadly, understand only vaguely. At some point, I heard the director of Triennale say something that I deciphered as “the exhibition celebrates the beauty of the human form.”

Hmmm, this can’t be right, I thought. This is certainly not what Rick Owens is about.

My Italian must indeed have let me down; the exhibition is anything but an ode to being human. Quite the contrary: as the title suggests, it is about transcending humanity and imagining a world evolved well beyond it. From the cyborg-like mannequins with signs of sutures (invoking Frankenstein’s monster) to the frankly unlistenable soundtracks to some of Owens’s shows that are played back in the last part of the exhibition, featuring sounds and frequencies clearly not designed for a homo sapiens’ audio spectrum; from the deformed silhouettes of the outfits on display to the primal – or, on the contrary, impenetrably emotionless – expressions of the models in the videos, everything in the exhibit screams “posthuman” rather than “human.” This is a word that Owens did not use in the title of his show, possibly for a reason: it would too readily place his work within a particular, somewhat controversial, theoretical tradition fixated on things such as technological singularity and inter-species relationships, and he most probably wouldn’t want to associate himself with anything easily readable.

The show is meant to be “a universe, rather than a retrospective,” as Triennale’s fashion curator Eleonora Fiorani put it, or a Gesamtkunstwerk – a total artwork where multiple items, techniques and mediums coalesce into a single conceptual and aesthetic entity. Every squared meter is recognisably Owens-esque: the sleek pyramidal structure with a provocative (or is it just me?) slit in the middle; the light installation visitors have to walk through in order to access the show, reminiscent of the projectors at The World of Rick Owens party held in London’s Selfridges 3 years ago; the angular furniture made in collaboration with his partner, Michelle Lamy; the unusually high black geometric plinths that mannequins are arranged on, making the audience literally look up to them.

This architecturally orchestrated idolatry, the pyramidal entrance, the stark, monochromatic color scheme, exacerbated by the cold winter light streaming through the windows, and the priestess hats on several dummies suggest an atmosphere of a temple. Yet, unlike many other museum settings, it does not require quiet reverence: the collectible furniture is there for visitors to sit on, and the mannequins – even those high up – are not separated from the public by glass or ropes; I saw people touch and feel the garments, breaking fashion exhibitions’ biggest taboo.

The largest object on display that ties the show together is a black abstract sculpture that “erupts” from one of the walls and follows the horseshoe-shaped gallery wing that hosts the exhibition. It looks like some sort of petrified alien matter (though my friend Hettie Judah, writing for New York Times, compared it to a giant turd) and further Owens-ifies the space. The materials used in it include Owens’s own hair, as well as “concrete, lilies, and the earth from the seaside in Venice where I will someday be buried,” as he puts it.

A couple of years ago, in a review of Alexander McQueen: Savage Beauty at London’s V&A, I lamented the fact that the show was too palatable. Fascinating as it was, it didn’t make one cringe or quiver in shock and revulsion, unlike some of the designer’s catwalk shows. It was so beautiful and viewer-friendly that it invited the visitor to linger on.

This is certainly not the case with this retrospective. Assaulted by the screeching, howling and hardly digestible soundtrack to his S/S 2014 mensear collection, Vicious, performed by the Estonian metal band Winny Puhh, even the hardened art press vacated the video screenings space moments after entering it. While some of the items on display may be beautiful in a conventional sense (Fiorani drew our attention to how some of the outfits from Tungsten and Naska collections, with their monumental draperies and serene silhouettes, invoked classical sculptures), many have a decidedly disturbing quality, with hunch-like volumes, reminiscent of otherworldly and potentially menacing growths, not dissimilar to the black sculpture.

The disturbance also comes from an uncannily inhuman quality the silhouettes project: the surreal Strutter boots from the eponymous S/S 2009 collection make the figures look like half-humans, half-seabirds; the extra-long, slinky dresses give Owens’s females a snake likeness. In some of the looks, the layering of tight outfits further suggests a snake shedding an old skin. If I understood Fiorani correctly, one of Owens’s inspirations is the Japanese “imu:.” When I did a search for this term in anthropology books, it returned stories of a folk-illness (a state that is not recognised by traditional medicine and is only found in certain cultures), recorded in remote villages of Hokkaido and Sakhalin and involving symptoms similar to those of trance and hysteria: contortions, convulsions, speaking in tongues, and so on. The locals link the “imu:” state to shamanism and tend to explain as “being possessed by a snake.” Even if I completely misunderstood Fiorani, this seems entirely plausible as a reference.

Indeed, the world of Rick Owens as pictured in the exhibition is a world of which human is no longer the centre. This is the world of animalistic characters, of dehumanised bodies and humanised garments (one of the fabrics is called “Bleach Vomit Denim”), of animate objects and thinking, agentic matters.

Close-up takes of models in Owens’s shows captured in the videos reveal awkward, uncomfortable movements of bodies entangled in and weighed down by the garments. Here, the hierarchical relationship between the human body and dress is not the way we are used to having it – the clothes are subservient to the body – but constantly renegotiated. The primacy of the human is further challenged, throughout the exhibition, by veils, spheres made of hair and other head pieces that obscure the faces and distort the silhouettes, suggesting a fusion of bodies and garments, resulting in new, monstrous entities.

All this may sound rather dystopian, but there are also other, more life-affirming fusions and dissolutions of boundaries going on. Another strong theme running through the show – incidentally, one that is also associated with posthuman thought – is intercorporeality: a connection between individual bodies and selves and other bodies and selves. This is perhaps especially evident in two videos, of Vicious (S/S 2014 womenswear) and Cyclops (S/S 2016 womenswear) collections. The former ends with the models forming something of a human snake on the podium, moving in unison, each individual becoming an organ of a bigger body. In the latter, models carry other models strapped on like rucksacks either on the back or on the front; the resulting silhouette is that of a phantasmagorical double-headed creature.

Some of the readers will have seen both shows in real life, but here they are almost more poignant: the videos, shot in black-and-white, projected on the walls at a very large scale and slowing the movements down, reveal some qualities that are less obvious when you are watching from afar, faster and in color, and are in awe because you are unprepared for what is about to happen. The projections throw into sharp relief certain qualities that are easy to miss at the actual show: a sense of oneness with others, of cooperation, of willingly giving up one’s individuality and obliterating one’s bodily boundaries in order to meld into a collective body and self. These videos achieved something fashion hasn’t done to me in many years: they made me cry.

“I guess that’s what I’ve been putting out there: inclusivity, the commitment to an aesthetic ideal and sticking to it… and an appreciation of the community,” reads one of Rick’s quotes in a mini-catalogue accompanying the exhibition. Subhuman Inhuman Superhuman might be an image of transcending humanity, but the powerful visceral emotions it evokes are undeniably human.

All photos courtesy of OWENSCORP