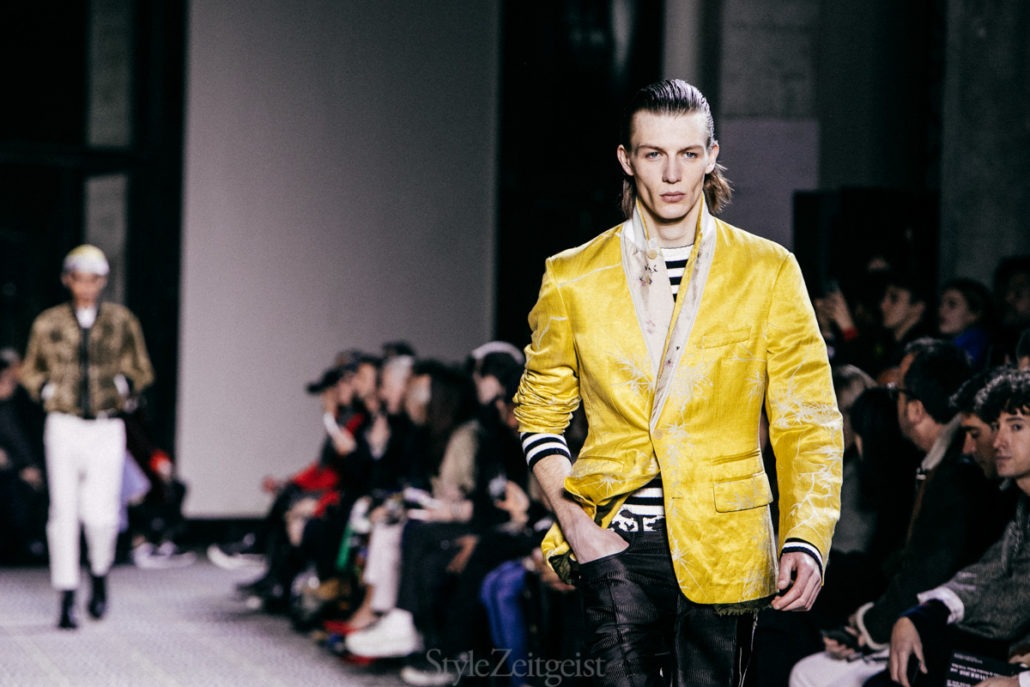 Paris was its usual gray and cold, a kind of weather for which “discomforting” is the best word. They are still short on comfort in Paris, 21st Century be damned, and maybe there is a kind of purpose in that, lest we humans get too self-satisfied. “When Verlaine wrote that rain fell into his heart as it did upon the city, he wasn’t exaggerating a bit. Parisian gloom is not simply climatic; it is a spiritual force that acts not only on building materials, on walls and rooftops, but also on character, opinion, and judgement,” said the writer Saul Bellow, who has spent some very uncomfortable months in postwar Paris seventy years ago. But the Haider Ackermann show, my first of the season as per usual, was so uplifting that it erased all negative thoughts. It was a carefully curated exercise in precision and focus – the lushness of fabrics and complexity of cuts gratified the eye. Ackermann toned down the boudoir vibe in favor of more structured pieces. The stunning gold and white vine embroidery on black pieces that Ackermann developed together with his Italian fabric manufacturer took center stage, with canary yellow added to his signature olive, further enriching the overall outing. Backstage, Ackermann said that he wanted to dispense with the notion that the man wears the clothes and not the other way around. Why not the other way around, indeed? When comfort is king and everyone seems to want only the latest hoodie, Ackermann’s vision was a welcome way to celebrate fashion.

Next day I was back at Palais de Tokyo for the Rick Owens show. His collection was called Sisyphus, and perhaps the harsh lighting and the massage-giving hardcore techno was meant to give this mythological creature newfound energy in his eternal struggle. Or a seizure. The voluminous outerwear and pants had a touch of softness though, in materials, colors, and cuts, some coats toughened up a bit with metal studs. It was a touching contrast, and the buyers moaned a sigh of collective relief at the more approachable display by Owens compared to the several previous seasons. Indeed, their struggle with Owens’s work has been Sisyphian, while we critics continually admire his creative push.

Who was the Sisyphus in this particular story I will never find out, because I did not get any press notes, and I was refused an interview request backstage by the KCD Cerberuses (or is it Cerberi?). Just as well – the job of the critic is first and foremost to comment on the work itself. My vote goes to the buyers, though it could have been the journalists, Owens himself, or the fashion designers at large who continue to push that stylish boulder up the mountain every six months. But, as Alber Camus said, we must imagine Sisyphus happy.

A few hours later Boris Bidjan Saberi proved again that he is the last man standing in the hard-hitting, unapologetically masculine corner of fashion. Saberi takes no prisoners when it comes to construction – and here was further proof. His idea was paganism, going back to the most basic roots of humanity. This needed new garments, and these were tubelike and padded, meant to be layered with more familiar things like jackets and pants. The result was fresh and it certainly held my attention as I was trying to mentally take apart the complexly styled outfits.

In contrast, Yamamoto’s show seemed tired as the old grandmaster himself. While the clothes were undoubtedly brilliant and will satisfy the designer’s fans, the setting, the theme, the music, the expression was exhausting. There was the slow walk of the models, the menacing looks they gave each other, the melancholic music, the banal hippie Lennon anthem. The listless show had people nodding off even in the front row. Mr. Yamamoto, we get it – you are dissatisfied with the state of fashion, you have put your heart and soul into your brand and it hasn’t been all a smooth journey. You are bruised by life. So are we. We love you and we are with you, but sometimes we need something to root for.

And then there was Dries, that magician who makes you love his clothes even if you don’t wear them. Van Noten had a marquee year in 2017, with a book publication celebrating his 100th show, accompanied by a globe-trotting book-signing tour, a touching documentary, and a series of talks. Everywhere I went last year – Paris, New York, Antwerp – there he was, on top of his game, one of the few truly independent designers who have survived the upheavals of the early ‘00s, beaten off the corporate raiders, and came out as the darling of the fashion world. You can’t help but root for this fairy tale. It was palpable most in Van Noten’s very persona, as he spring-stepped for his bow. And the collection seemed to underscore his success, as Van Noten went for mixing menswear archetypes – suiting, sportswear, military. There was a sense of history of menswear, and a sense of history for Van Noten, who has been taking stock of his work. The gorgeous, psychedelic prints came courtesy of a fascinating hand painted marble technique (you can check out the video on the DVN Facebook page). During the finale, a slew of models came out wearing these printed anoraks, a Dries Van Noten Peace Corps.

On Friday at Ann Demeulemeester there was everything one could ask for from Sebastian Meuneir – elegy, romance, sweep and grandeur. He went back to Demeulemeester’s heart, in which poetry occupies prime real estate. The music was by Syd Barrett, the tortured original member of Pink Floyd, and the mood was by William Blake. There were those Edwardian cuts I have come to love from Ann. There was jagged, wild shearling, straight out of Demeulemesteer’s archive, the multi-button pants, and the wonderful layering of it wall. The designer (or his stylist) mercifully toned down overstyling that has heavily relied on ornament in the past several seasons (too many feathers, ribbons, and overall fuss). It was coherent and moving, as a Demeulemeester collection must be.

From Demeulemeester to Comme des Garçons, from young men to young boys, from William Blake to Peter Pan. Kawakubo continued her infantilization of men with silly dinosaur masks, comic strip prints, and the predominance of white, the color of innocence and diapers. For men, there was nothing to be found. My interpretation goes two ways – either Kawakubo does not think much of men, or this is her sly comment on our increasingly juvenile male culture. After all 40s are the new 30s, 30s are the new 20s, and 20s are the new teens. Men are the new children, indeed.

Next morning at Sacai, Chitose Abe revved up her everything-and-the-sink approach with unabashed gusto, and boy was it all phenomenal. Bandana prints by Reyn Spooner were given new life on jackets and pants. Military khahki, her signature navy, fur, zippers, buttons, were all thrown in to make a wonderful melange. Abe is an unrivaled mixer of elements who has managed to create a new aesthetic well into this decade when so much has been done in fashion – that’s a feat worth celebrating. Backstage Abe was wearing a sweatshirt, with the age-of-Trump motto of the New York Times – “Truth. It’s more important than ever.” – also featured in the show. But you know what’s also more important than ever in fashion today? Real design. And the show was chockfull of it.

My last show was Thom Browne, and he was as sly and whimsical as ever. The set design was a snowy forest, in which dwelled the seven dwarfs – these were turned from male to female by putting braids on the male models. The clothes were, as per show notes – “old school Thom Browne” – padded, abbreviated, cozy, fabulously constructed and undoubtedly a joy to the touch. Browne continues to be a rare auteur who marches to his own beat, and it was a worthy finale to the overall pretty excellent fashion week.

Of course, shows aren’t everything – clothes need to be felt and worn. I’ll tell you what I saw at the showrooms in part deux.