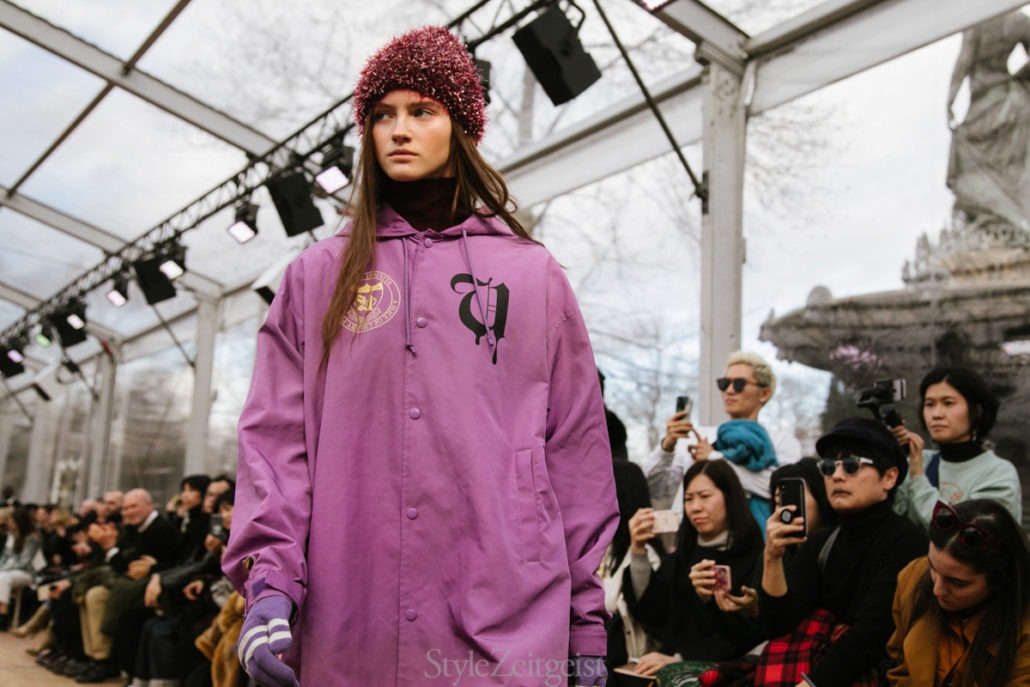 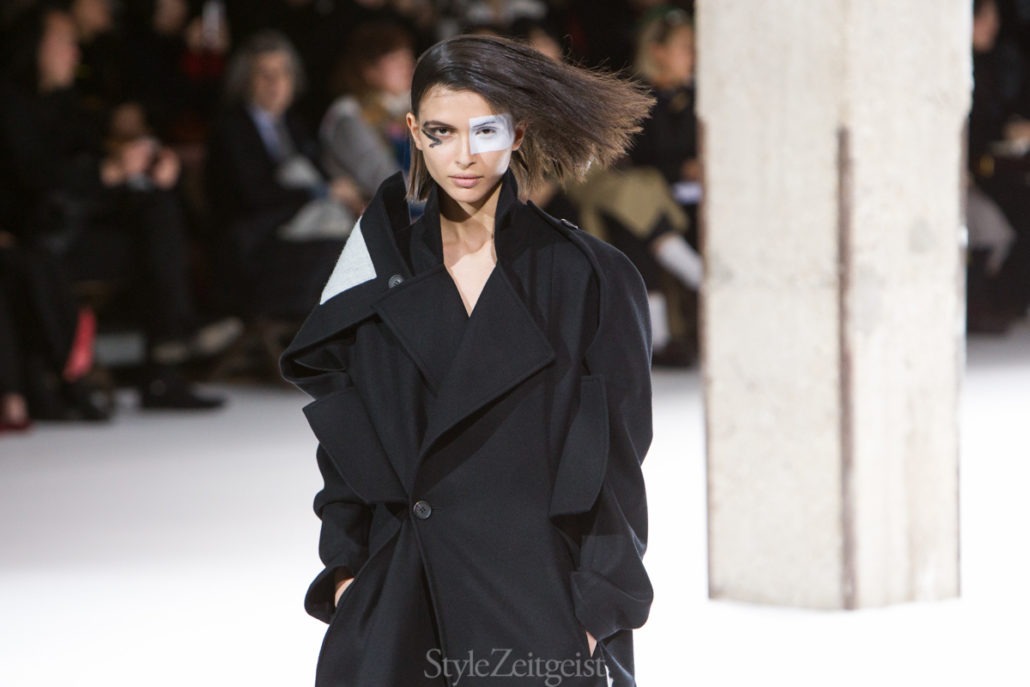 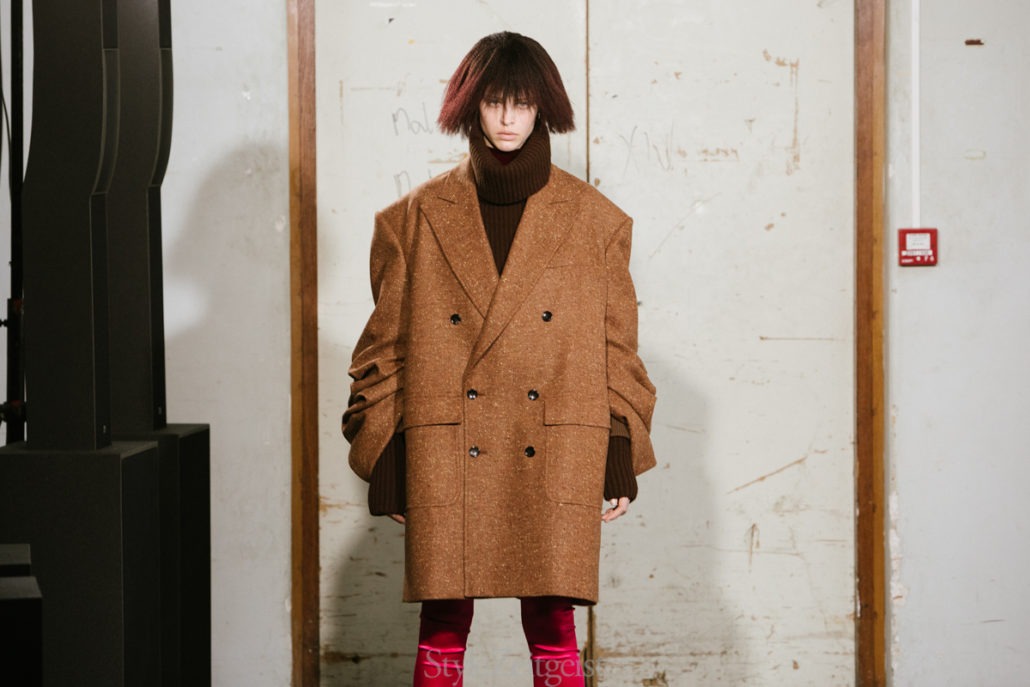 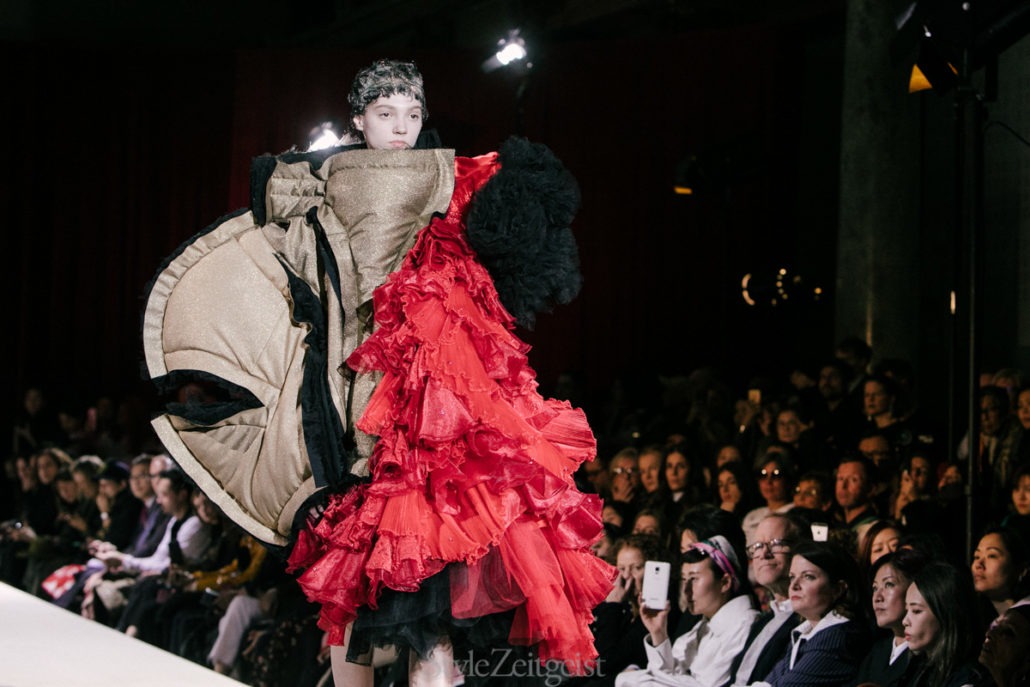 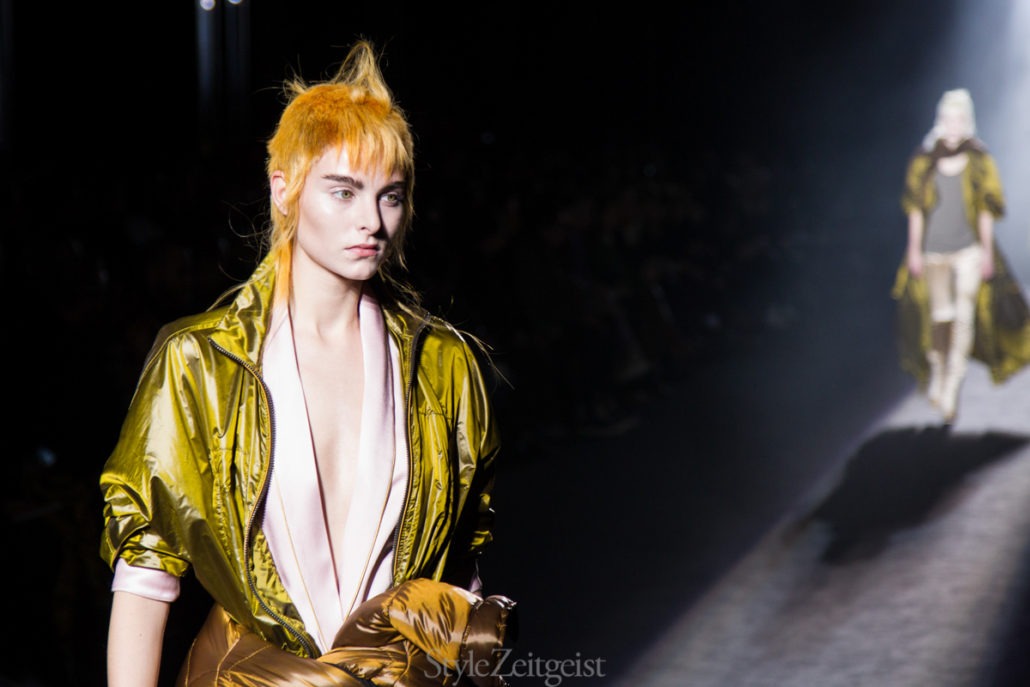 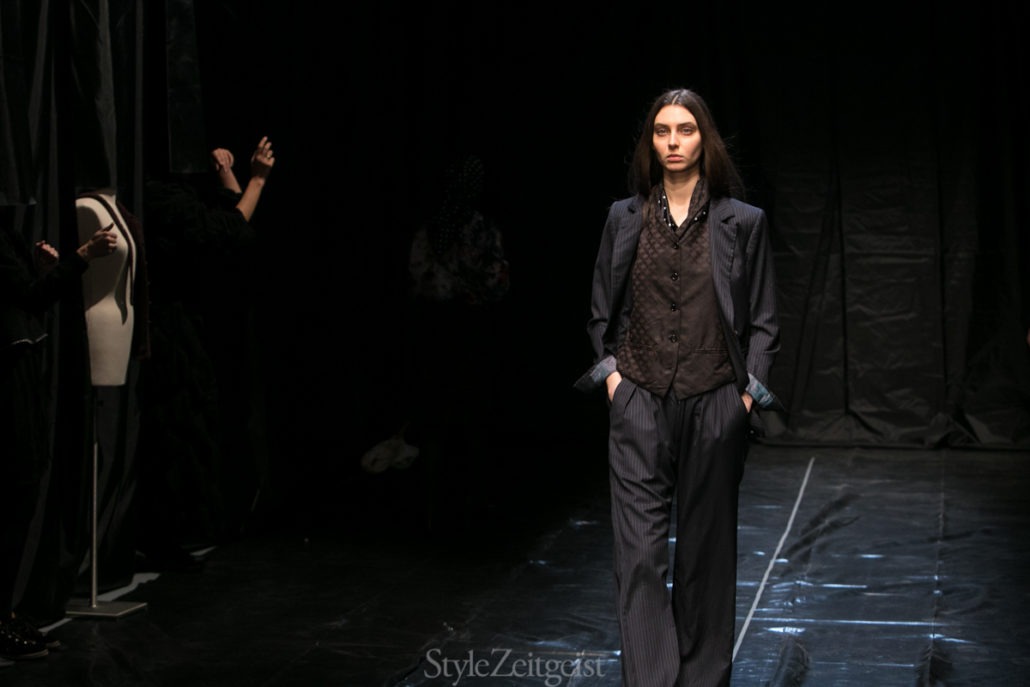 On Friday Olivier Theyskens presented his most convincing collection since he relaunched his eponymous label two years ago. He firmly stuck to his DNA and his ideal(ized) woman, who is both fragile and strong, and who surely must live firmly outside of this cheap and cynical world. Her dark romanticism was writ large in the lace and the tailoring and Theyskens’s favorite method of closure, hook-and-eye. Her strength was stamped (stomped?) onto the catwalk floor with her mega-platform boots that reminded me of the ones the girls I knew in the ‘90s wore to goth clubs. The #metoo movement was on Theyskens mind, but don’t expect this master couturier to express it via cheap slogans on t-shirts (I’m looking at you, Dior). Instead, he’d rather those boots one day walk all over you.

The Undercover show that followed was a confirmation of every single reason why designers should continue presenting fashion on the catwalk. Called “We Are Infinite,” the show, opened by Sadie Sink, also known as Mad Max on the show “Stranger Things,” was a celebration of youthful innocence and its transience. It was touching, sincere, and bittersweet. As the voiceover from the movie “The Perks of Being a Wallflower,” kicked in before the finale, the anxiety of being a teenager that most of us forget too soon as adults permeated the room, uplifted the heart, only to shatter it as it seamlessly segued into David Bowie’s “Heroes,” and the young models came out wearing different versions of a raincoat stamped with slogans like “Total Youth” and “Former Juvenile.” Here was a range of emotion that marks a fashion moment in a show that celebrated hope and uplift, however temporary. Backstage after the show the critic Tim Blanks said that he almost teared, and I was glad that I wasn’t the only one. And then there were the clothes, formal high school and athletic uniforms reimagined in different ways, tailoring elements applied to hoodies, different garments spliced together, and those raincoats with the strangely beautiful graphics that can only come from Jun Takahashi’s singular mind. There was also a series of garments made from cotton canvas bonded to an aluminum base, creating a 3D, crinkled effect, and that let you shape the garment with your hands. And there were the new Nike sneakers under Takahashi’s GYAKOSOU collaboration that already have set the streetwear world ablaze.

My Friday night ended with another late show by Yohji Yamamoto. “Late” could be used in several ways here, and I wouldn’t be surprised if what we are witnessing is the “late period” of Yamamoto’s work. Though the show was uneven, overall it played to Yamamoto’s strengths as a designer. There was volume without sloppiness, sexuality instead of sexiness, the masterful tailoring. To say that we have seen it all before would not exactly be right, but not exactly wrong either. The slow pace, the strumming of acoustic guitars of its soundtrack added to the sense of lethargy that I also felt in January during Yamamoto’s men’s show. Perhaps the old maestro is telling us that he is tired.

Saturday we were treated to a Comme des Garcons trifecta – and the impact of those shows held on the same day was undeniable. It underscored just what an awe-inspiringly creative house Rei-san has built over the years. Even though the shows were not flawless, the sheer amount of creative audacity on display was enough to make a statement. First was the Junya Watanabe show. The music was punky, and so were the models. But, I admit that I was taken aback by the pretty overt Balenciaga/Vetements references in chunky sneakers shown with athletic socks, American Apparel-style leggings, and frumpy flower prints. This was something I definitely did not expect from a pretty self-referential master like Watanabe – and I hope this is me making the wrong connections (though some people I discussed the show with were in agreement). There was also oversized men’s tailoring, but this was done in Watanabe’s signature way – deconstructed and reconstructed with surgical precision. Other things, trench coats and biker jackets hewed closer to Watanabe’s work.

I forgot all of my confusion by the time the first model at the Noir by Kei Ninomiya show completed her round. Outfit after jaw-dropping outfit, Ninomiya was proving that he is the future of Comme des Garcons. Ninomiya is the master of construction – he tries to avoid stitching as much as possible. He uses mostly the color black as a backdrop, so as not to distract himself from already impossibly complex construction methods he comes up with. Here were chunky knits and dresses put together like Legos from small repeating parts. Tulle was frayed at edges to resemble fur, and flower masks completed Ninomiya’s catwalk triumph.

Though Ninomiya’s clothes are complex, they are wearable. In contrast, Rei Kawakubo no longer cares for making clothes per se, as she has stated herself. As the impossibly absurd outfits succeeded one another on the Comme des Garcons runway, I was mulling over that fact. It leaves one in quite a conundrum – what is it exactly are we supposed to judge? If it’s not fashion, what is it doing on a runway? If it’s art, why isn’t it in gallery instead? Is it art to begin with? That the show was fun and that the creations we were looking at were overwrought to the point of gleeful nuttiness was undisputable and left everyone in a good mood. But WHAT the hell were we looking at? In a showroom there are simplified versions of Kawakubo’s creations for the buyers, and they are interesting in themselves. Perhaps the point of the runway is just to have fun.

As the Haider Ackermann show unfolded following that of Junya Watanabe, I thought about things Ackermann can get away with that many others can’t; like satin shoes (or satin anything), patent leather, velvet, and leopard prints. It’s a fine line between trash and sex, vulgarity and seduction, and Ackermann is a master of toeing it. Too much of it can still grate, which Ackermann seems to understand, as he mixed in some choice quilted pieces with raw edges. Covering the precious brocade with quotidian cotton is his version of burying the diamond in the rough, and I am all for it.

That evening ended on another high note at the intimate off-schedule show of Geoffrey B. Small. It was set to another theatrical performance, which had to be modified at the last moment, because the main performer’s grandmother fell ill. But Small’s band of outsiders persevered, and it was a touching show, dedicated to the hardworking women of Italy, Small’s adopted country. The everyday, lived-in aspect that Small builds into his clothes, despite their impossibly luxurious materials, took on a different meaning in this light, and so did the flower motifs printed on silk. Designers often talk about imbuing their clothes with emotion, and Small is one of the handful that actually do it well and with a degree of subtlety that does not hit you over the head.

From Small’s intimacy I was whirled into another Thom Browne extravaganza. I was back at the sumptuous Hotel de Ville. This time the runway seating was broken up into squares (with three sides, the fourth one left open for models to walk in). As Madonna’s “Vogue” kicked in – hardly something I expected from the usually reserved designer, I knew we were in for another surprise. There were nods to Madonna in Browne’s couture masquerading as ready-to-wear – most notably the bustiers and underwear-as-dress reminiscent of the infamous Madonna’s costumes that back in the day came courtesy of the original infant terrible of fashion, Jean-Paul Gaultier. That a power woman was on display was unquestionable – actually a power lesbian vibe was added by hair and make up coupled with sharp tailoring. In lieu of the finale walk, the music switched for a few seconds to “Who Let the Dogs Out,” and four men in women’s heels and dog masks were led out on a leash by a stately model. The meaning was pretty clear – take that, Harvey Weinstein (and the others).

My last show was Sacai, and I hardly could have ended on a better note. Chitose Abe showed again that her feats of sartorial engineering seemingly have no end. It made me think that her design DNA – splicing garments together – is actually very clever in this way; that she can continue her hybridization experiments for years to come with fantastic results. This time, Abe chose the garments to be fused along the sides, instead of her usual front-back mismatching, and it was brilliant. The leitmotif was fusing the casual with the formal – puffer jackets, bombers, and quilted nylons were married to tailored blazers and trench coats with school uniform stripes and tartan. It was glorious, phenomenally creative and eminently wearable at the same time.

A few last notes on the atmosphere of the fashion week. It was nice to see creatives going to see other people’s shows. I ran into Jun Takahashi at both Comme des Garcons and Sacai, into Adrian Joffe at Undercover (fine, Virgil Abloh was there, too, if you must know), and Michele Lamy at all of the shows of the CdG family.

Mercifully – at least as far as I saw – there was a noticeable drop-off in the hype trash of the Balenciaga/Vetements variety among the attendees, with the exception of the nauseatingly ubiquitous Balenciaga “Triple S” sneaker. And little in terms of Off-White (though I did see those dumb handbags with “Sculpture” written on them) and not even that much Gucci. Perhaps at least the fashion elite is once again favoring style over fashion, individuality versus conformity? One must keep faith.