Notes on a (Highsnobiety and Vetements) Scandal 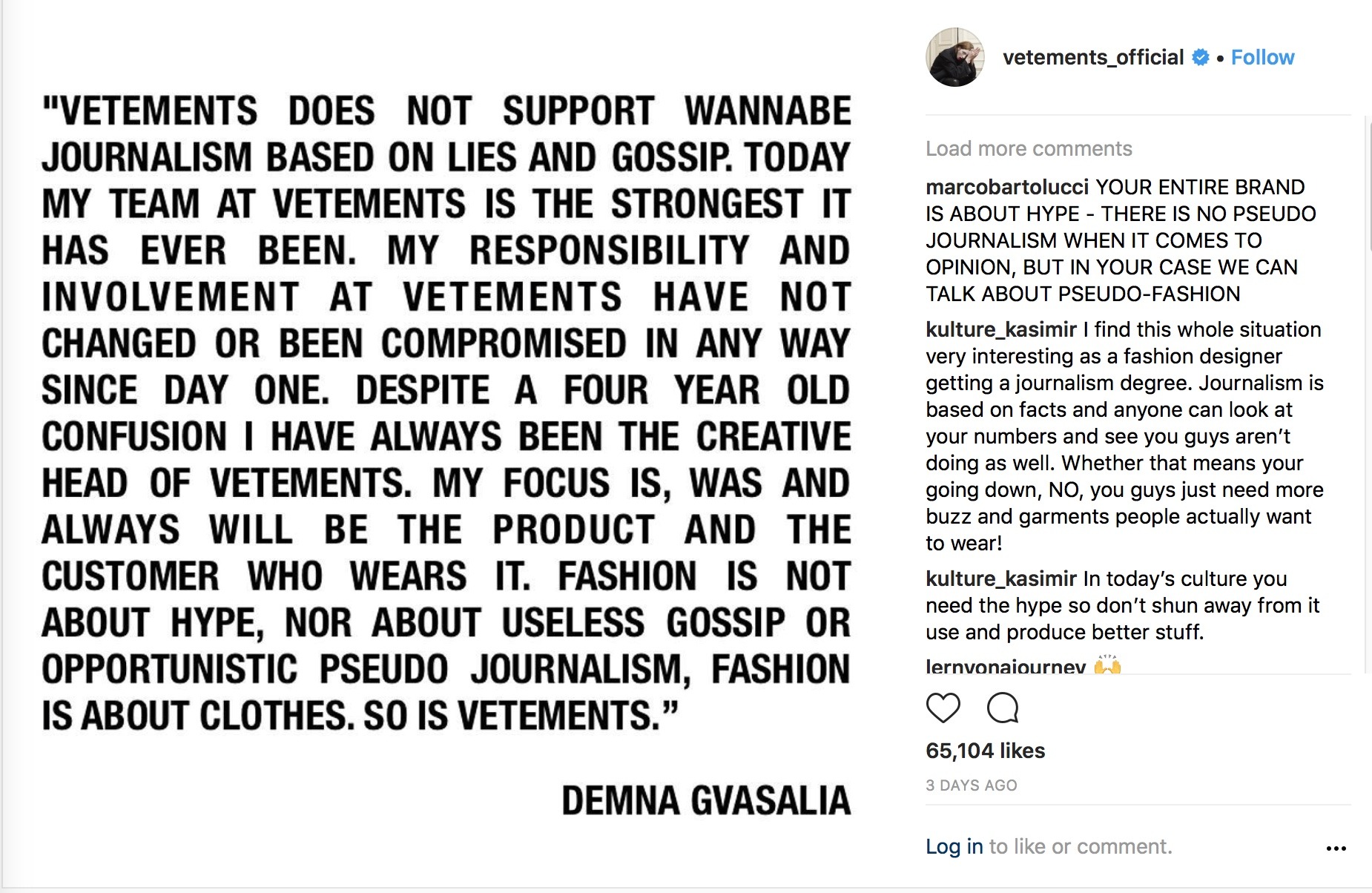 Last week the influential streetwear and youth culture news website Highsnobiety published an article claiming that Vetements has been losing clout with fashion forward consumers. It cited several store buyers, who wished to remain anonymous, about lukewarm customer demand that has led to slashing orders and putting the once hyped brand’s goods on sale, something that Vetements tried to avoid by keeping their production runs small. The buyers blamed the overinflated pricing on Vetements’ part, and consumers shifting their taste towards Gvasalia-designed Balenciaga.

The article might have gone relatively unnoticed had it not apparently offended Demna Gvasalia, who posted a retaliatory statement on the Vetements’ Instagram.

To add fuel to the fire, the industry trade newspaper Women’s Wear Daily published an article with the following quote from Guram Gvasalia, Demna’s brother and Vetements’ CEO, “It is sad to see the state of journalism today. In the era of click-baits, using the name of our company in the article is a click-bait itself, and even more so when it’s mentioned in a negative headline. To the disappointment of all the haters, we would like to declare that Vetements is in the strongest creative and financial state it has ever been. We are definitely not going out of business and the speculations about our sales figures are not only false and defamatory in its nature, but also simply ridiculous. Sadly some journalists today are more concerned with writing fake news and reposting shocking headlines rather than checking facts to show the full picture. It is especially upsetting to see some fashion writers, fueled by their personal agendas, attacking young independent brands while sucking up to big conglomerates for their advertisement budgets. Serious news outlets seem to be turning into tabloids and gossip blogs that impose somebody’s opinion and made-up stories as true facts.”

The above conflict is worth analyzing in terms of how the media approaches certain controversial subjects, and how it presents them to their respectable audiences; and the more important questions of where actually lies the truth, if there is one to be gotten at all. Hence, some thoughts (Disclaimer: I sometimes contribute articles to Highsnobiety).

The first important issue here is how negative and positive coverage is presented and in whose interest. Highsnobiety interviewed – “a variety of sources in the American, European and Asian markets—buyers from retailers stocking the brand, a former Vetements employee and a sales associate from a luxury department store that carries the label” – wished to remain anonymous. The reason here is pretty obvious – no one wants to burn bridges or lose their jobs. I can see why a disgruntled former employee may want to present his former boss in a bad light, but I fail to see any reason for a store to say a brand they are selling is not doing well.

I reread the Highsnobiety article several times, and except its rather categorical, attention-grabbing title “2 Years After They Broke the Internet, It Looks Like Nobody is Buying Vetements” I failed to see anything egregious in it. The main thrust of the article is that the fashion cognoscenti and the hypebeasts – the kind of audience that Highsnobiety caters to and so do the store buyers they interviewed – have largely moved on from Vetements to Balenciaga. Anecdotally, I can confirm this. I have seen a significant drop in people milling about during the Paris fashion week in Vetements. Late last year the owner of a prominent independent store also complained to me, unprompted, that the store’s customers were moving on from Vetements to Balenciaga. I reached out to Highsnobiety, and they confirmed that they stand by all of their sources. That they did not ask Vetements to comment may be somewhat of an issue, but what kind of an answer would one expect from a brand in fashion, where everything is always amazing, until it’s not?

In turn, the responses from Demna on his Instagram and in the Women’s Wear Daily article ranged from childishly defensive to canned PR-positive. Let’s start with Demna. To begin with, the bizarre beginning of his Instagram post that “Vetements does not support wannabe journalism based on lies and gossip.” A brand is not in a position to support journalism of any kind unless it’s an advertiser. Journalists, however, are free to report what they see. Sorry, this is the reality you signed up for. And while Demna is within his rights to be angry, his claim that the Highsnobiety article is “wannabe journalism based on lies and gossip” does not hold much water. Just because Highsnobiety’s sources wished to remain anonymous, does not make their statements “lies and gossip.” You might as well say that the New York Times political columnists publish “lies and gossip” because they use anonymous sources in the Trump administration. Well, actually there is one person who does say that.

Demna goes on to say that he has always been the creative head of Vetements. Be that as it may, for the first year Vetements officially presented itself to the fashion media as a fashion collective. It’s too late to rewrite that story when you can simply google it. Demna’s statement that “FASHION IS NOT ABOUT HYPE” – in 2018, is laughable. Here, the need for a reality check is too self-evident, and I am surprised that Vetements PR officer did not step in. The last two lines of the post are just rambling, conflating fashion and fashion journalism, fashion and clothes, and the surreal-level of Demna’s misconception of what his label has become. But you don’t need to take my word for it – just look at the comments under his post.

Guram’s statement in WWD was a little more substantive, though it began with a bizarre claim that using “Vetements” in an article constitutes click-bait, especially if the coverage is negative. Here, Guram seems to be saying that a) serious journalists should not write about Vetements b) all negative coverage of Vetements is just click-bait. He seems to wish that “Vetements” should not be used at all, except by them, which would be a nice way to control his brand’s narrative.

Guram goes on to say that Vetements today is in its best state creatively and financially. While arguing about one’s creative state is subjective, one’s financial state is pretty easy to fact-check, which WWD failed to do. They were content with Guram’s claim that Vetements has experienced 50% year-on-year growth. I asked Vetements to release its year-on-year store orders and revenue figures. Needless to say, my request went unanswered [Editor’s note: A representative from Vetements got back to us after the time of publication of this article, stating that Vetements do not release their financial figures being a private company]. Should we then simply take Guram’s word for it, the way WWD is content to do? Even then, WWD kind of misses the point – Highsnobiety did not claim that Vetements is losing money – let alone going out of business – not yet. The results of what the anonymous buyers were reporting will probably be felt – if the things really are as they were described – a year from now.

Guram went on to blame journalists for publishing fake news “fueled by their personal agenda… while sucking up to big conglomerates for their advertising budgets,” though I fail to see why a journalist would have a personal agenda against a fashion brand. One may have an agenda as a critic, but it’s not like Demna hit a fashion journalist’s child with his car. And speaking about advertising budgets – Demna also works for Balenciaga, which is owned by Kering, the second biggest fashion conglomerate in the world. Highsnobiety was actually being brave here, because there is a good chance they may be foregoing significant advertising revenue from Kering.

WWD interviewed several buyers as well, all of whom reported good sales for Vetements, but let’s pay attention to whom they interviewed. Saks, Jeffrey New York, and Harrods are department stores, whose buyers are always, and I mean ALWAYS, upbeat. Saks is an especially egregious offender here. It has always baffled me that WWD continues to ask Saks’s buyers for their opinion during fashion weeks. It’s always the same. As a matter of fact you will be hard-pressed to find any store buyer saying anything negative about a brand they are selling on record to the fashion press, period. This kind of self-sensorship is endemic in fashion.

But, besides this PR-sanctioned number, there is another undercurrent here. With the exception of Maxfield, none of the stores on the WWD list are known for moving fashion forward or for catering to fashion fans of the first order. The point here is that Highsnobiety and WWD talked to stores who cater to a totally different customer. The entire article made WWD look either out of touch, or like a state-sponsored mouthpiece for the industry.

It’s hard to pinpoint whether Vetements is dead or not from the retail perspective and the sell-through ratio right now. A cursory search on Lyst.com, a shopping aggregator, shows 504 out of 1555 Vetements items for women and 93 out of 698 items for men on sale, but we are nowhere near a regular sale season.

I will agree with Guram on one thing – the sad state of fashion journalism today. Though its sadness derives exactly from its inability to publish anything critical and the backlash it risks facing when it does.