At times the Japanese artist Takashi Murakami has irritated me to no end. My first major encounter with his work was at the highly irritating (see?!) 2008 Brooklyn Museum exhibition that was sponsored by Louis Vuitton. Well, it was more like highjacked by Louis Vuitton, which put a stand with its bags, some of which were for sale, in the middle of the exhibit, and staged a mock Canal street style fake bag stand that sold real $2000 LV bags, predating the similar antics by the likes of Vetements and Diesel we have seen as of late. This vulgar display of commercialism tarnished the whole thing. Before that, of course was the much-hyped collaboration with Louis Vuitton (obviously they did not sponsor the exhibit out of the goodness of their capitalist hearts), which, like that with Stephen Sprouse, presaged the avalanche of fashion-artist collabs. Recently, there was an even more questionable collaboration with the ubiquitous Off-White, brokered by Larry Gagosian, the Bernard Arnault of the art world. Murakami’s constant self-knowing smirk that accompanied these crassly commercial stunts told of his complicity more than of anything else. Any attempt of defending him with the usual tropes of “subverting” or “reclaiming” was annulled by the obvious knowledge of what he was doing. He might as well have put a big “SELLOUT” sign on his back. Some of the work looked crowd-pleasing, sometimes downright infantile, its popularity proving the truism that adults are the new children, chucking out all pretenses at the seriousness of art. Murakami seemed to find his success equally in selling art to hip-hop billionaires and flinging overpriced plush toys at museum shops. And yet, and yet.

And yet to dismiss Murakami wholesale is a mistake, and his new midcareer retrospective, Takashi Murakami: The Octopus Eats Its Own Leg at the Vancouver Art Gallery offers ample proof. The exhibit is comprised of fifty-five works, mostly paintings and several sculptures, from all stages of Murakami’s career, beginning with the 1980s. The first thing about Murakami’s work is that as art itself it’s impossible to dismiss. Its sheer complexity, richness of color and detail is there and it is obvious, unlike say that of Damien Hirst and Jeff Koonz, the paragons of meretriciousness. Some of the more impressive paintings on view are recent, like the several pictures from the series that deals with Buddhism. Of these perhaps the most impressive is the “100 Arhats,” a sprawling, multi-panel work painted with acrylic, and gold and platinum leaf.

Then there is the subject matter, its seriousness often hidden by the loudness of Murakami’s style. Those cute mushrooms that the children love are nuclear cloud mushrooms reflecting the trauma of post-Hiroshima/Nagasaki Japan. The cuteness itself is a comment on the Japanese obsession with cuteness, a sign of a nation forced into infantilism through the extreme violence America has inflicted upon it. You won’t get it if you don’t do your research, but once you do get it, the impact is somehow stronger than if say someone like Anselm Keifer depicted such trauma bluntly and head-on. Same goes for the myriad of rainbow skulls in paintings like “Of Chinese Lions, Peonies, Skulls, and Fountains” and “Waterfall Appears in the Ocean! In its Midst, Kraken!”

Murakami’s main theory is called Superflat and there lies the crux of his work, which turns the serious into the frivolous, but only at a superficial glance. It’s worth mentioning that Murakami holds a Ph.D in Japanese painting. The complexity of his influences and his ability to string them along is there. You just have to look harder past the bubble-gum surface. 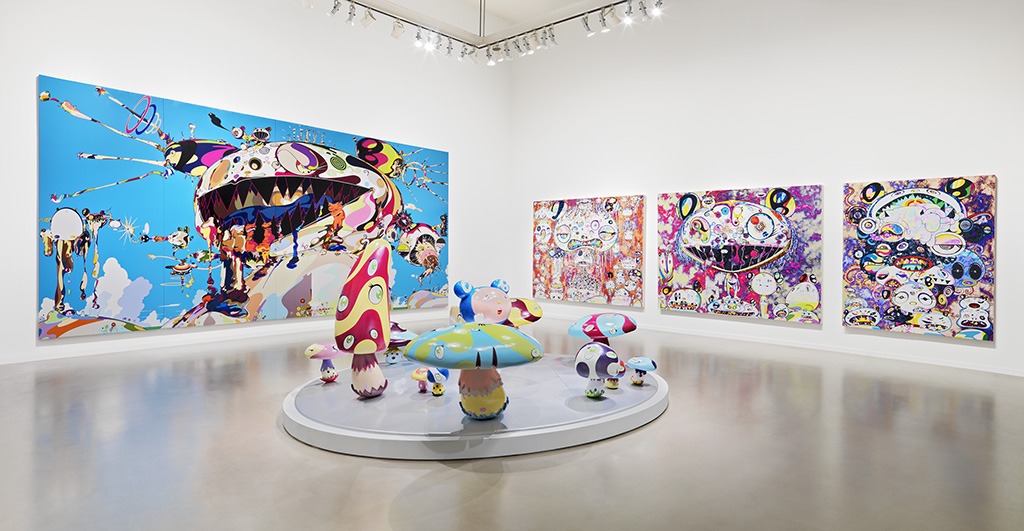 Takashi Murakami: The Octopus Eats Its Own Leg at the Vancouver Art Gallery through May 6th 2018