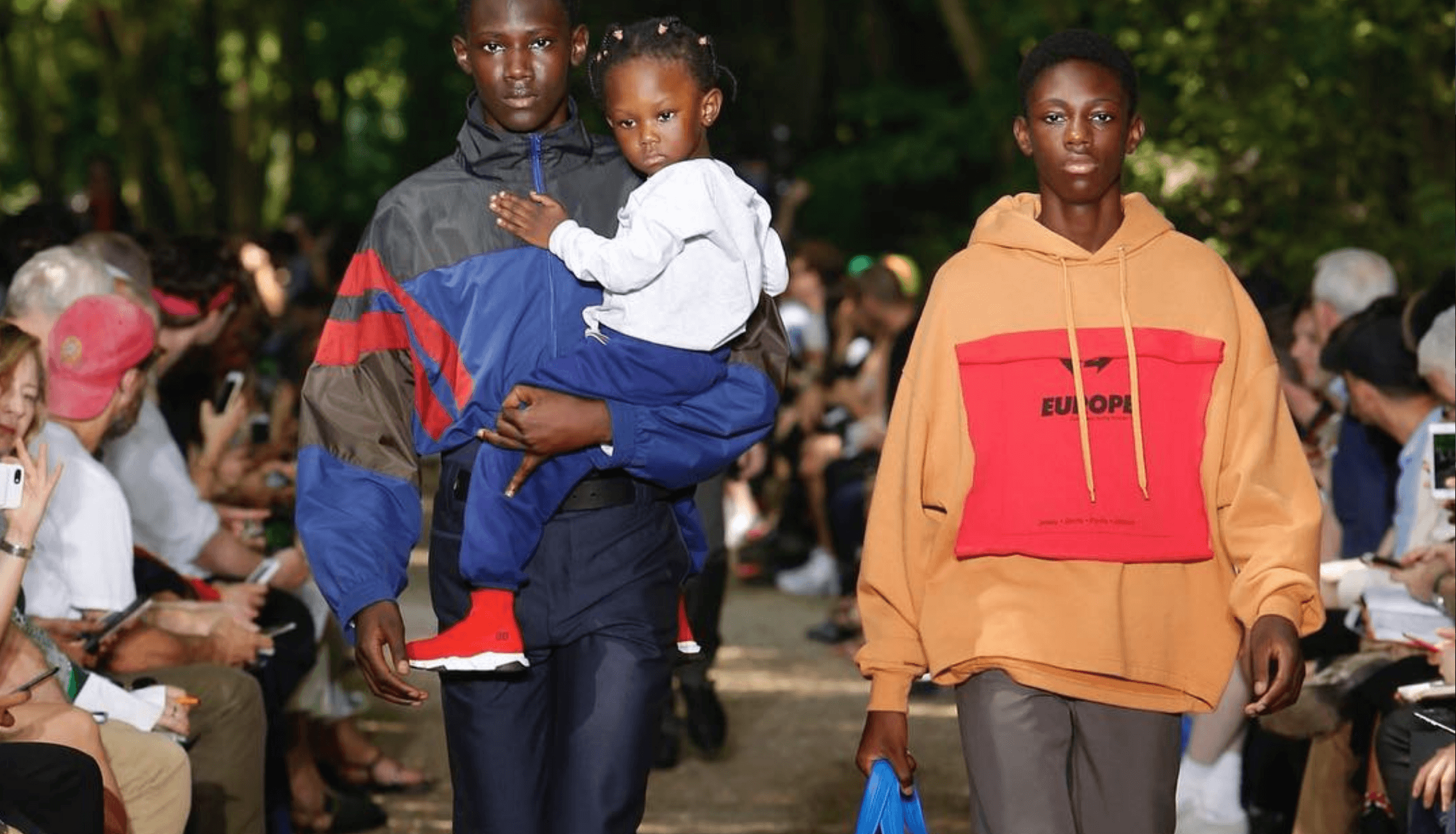 The recent scandal involving the staff at a Balenciaga corner at Printemps, the Paris department store, in which it allegedly discriminated against a Chinese shopper, is reprehensible in its own right. And while the incident could be written off as a one-time faux pas that involved a particular member of staff and not so much the brand itself, there is something more unsavory about Balenciaga. Namely, it is that I find the output of Demna Gvasalia, the brand’s creative director, distasteful in the way it hijacks the aesthetic codes of the poor and dishes them out to those who can afford $800 hoodies.

Much ink has been spilled by the fashion media about how Gvasalia has been “subverting” fashion by elevating the taste of the lower classes. It started in his first collection with the “bazar” bag, that is reminiscent of those the poor around the globe tote around, only it’s made of leather and costs $2000, and continues to an $850 shirt “inspired” by a plastic trash bag. Somehow it’s supposed to make high fashion more “real” or socially aware. In reality it does the exact opposite. No verbal gymnastics on the part of the fashion media can avoid a simple and glaring fact – fashion is in the business of selling expensive things to those who can afford it. More than anything Gvasalia’s insistence on selling the sartorial codes of the poor to the rich is reminiscent of a carnival where the rich dressed up as the poor, only now this role play takes place 365 days a year.

Why do Gvasalia’s sartorial exercises that could be simply written off as camp seem offensive? Because to the poor the idea of designer fashion, like that of all luxury, is aspirational. When you grow up poor, you are only familiar with the lowest common denominator of fashion – say logoed goods from Louis Vuitton, Versace, or Gucci. These ideas of luxury are simplistic, but also honest – because to the poor fashion equals luxury, and luxury equals status. Their aspirational nature is universal, whether you are a working class British football hooligan buying your first Stone Island jacket, or a kid from immigrant Brooklyn buying your first Versace shirt. The idea that fashion can be ironic is the last thing on the mind of those who aspire to rise above the world fate has thrown them into.

The immigrant Brooklyn kid buying a Versace shirt is me. It was in the mid-nineties, and I was at a discount store, because I was too terrified to walk into a designer boutique or a high-end department store, but the shirt was real. It was made of fine black corduroy and had those Versace medusa silver buttons on it. It cost a hundred dollars. Buying a shirt for a hundred dollars felt like wading into a cold lake. I had never bought anything this expensive. The question was not so much whether I could afford it – I had the cash I scrounged up from my minimum-wage job – but whether I deserved it. What would my parents say? Of course I would lie about how much it cost, but how could I dare bring a hundred-dollar shirt into a one-bedroom apartment, where my brother and I slept in the living room on foldout couches? But I bought it, because this shirt embodied the very idea of aspiration, of transcending one’s sad surroundings.

Another aspect that attracts the poor to luxury is that it’s well made. High fashion signals aspiration not only because of the logo, but also because of superior materials and craftsmanship. It looks expensive and it lasts.  As a matter of fact the very logo was the signifier of luxury, the quality control stamp that was visible to the world.

And lastly, and maybe most importantly, the poor buy luxury because it looks like nothing they wear. I could not wait to shed my poorly constructed, ill-fitting polyester garb in favor of something that actually conformed to the contours of my body and felt good on my skin.

Much of Gvasalia’s output at Balenciaga is nothing of the sort of what I describe above. It offers the mundane, appropriated from the poor, for the enjoyment of the rich. And there is something self-evidently perverse in consuming the mundane at high prices. The acid-washed gray jeans that resemble those I can find in my immigrant neighborhood for $10 are only funny to the elite, because irony is a value of the elite. To the rest these jeans are distasteful, and not only on an aesthetic level. In truth, Balenciaga does nothing for the poor, except the lip service of a donation of $250k to the World Food Programme (Kering’s, Balenciaga’s parent company, revenue for 2017 was $18 billion). The pretense on Gvasalia’s part at celebrating the poor is largely just that, a pretense, as he seems to be enjoying his lush life in Switzerland. Not only the poor don’t know or can’t afford Balenciaga – they are not even looking at the magazines that Balenciaga advertises in. Simply put, Balenciaga is not in their orbit. And even if it was, the last thing the poor want to wear when they transcend their class is something that looks like what they wore when they were in it.

Fashion used to admit to being elitist, and though it was seen as materialistic and frivolous, at least it was honest about these things. Today, fashion is both elitist and dishonest. But a $2000 bag is a $2000 bag, no matter how you spin it.