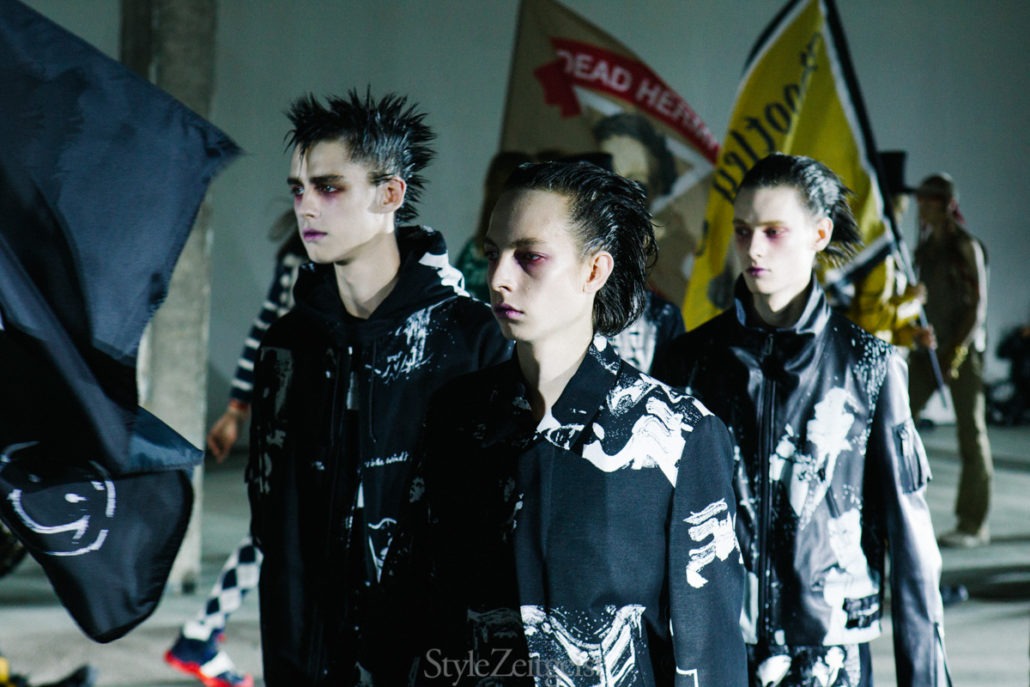 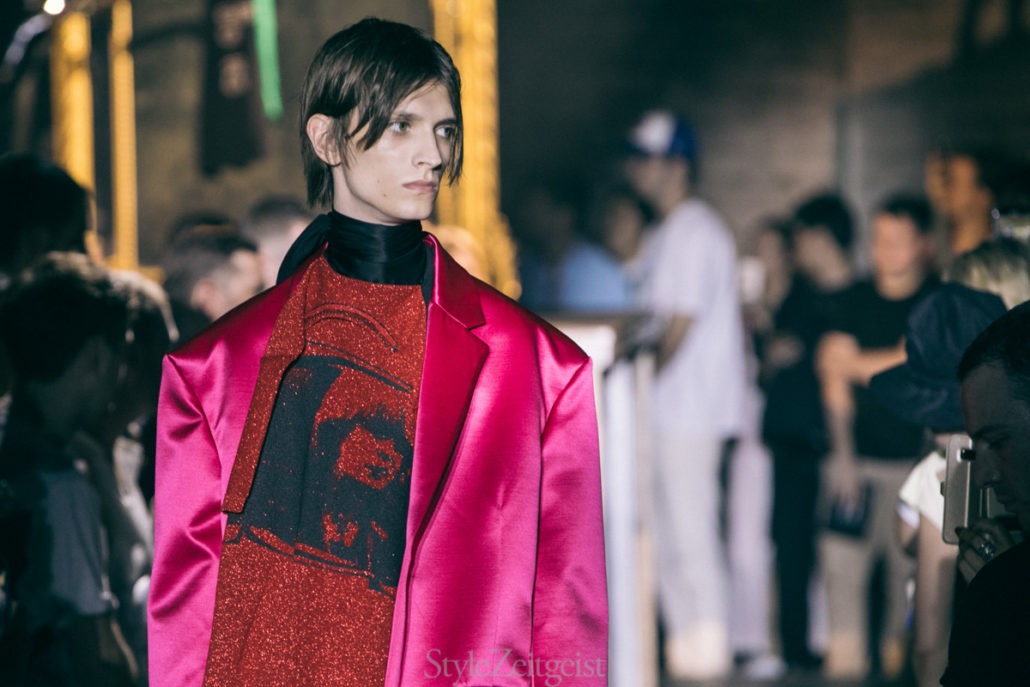 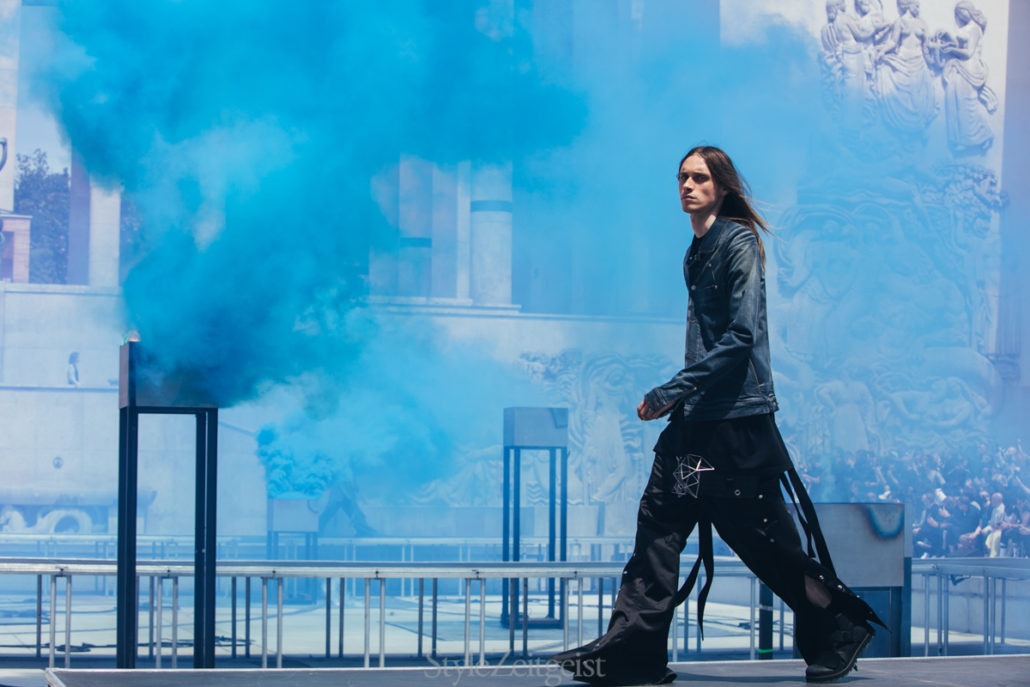 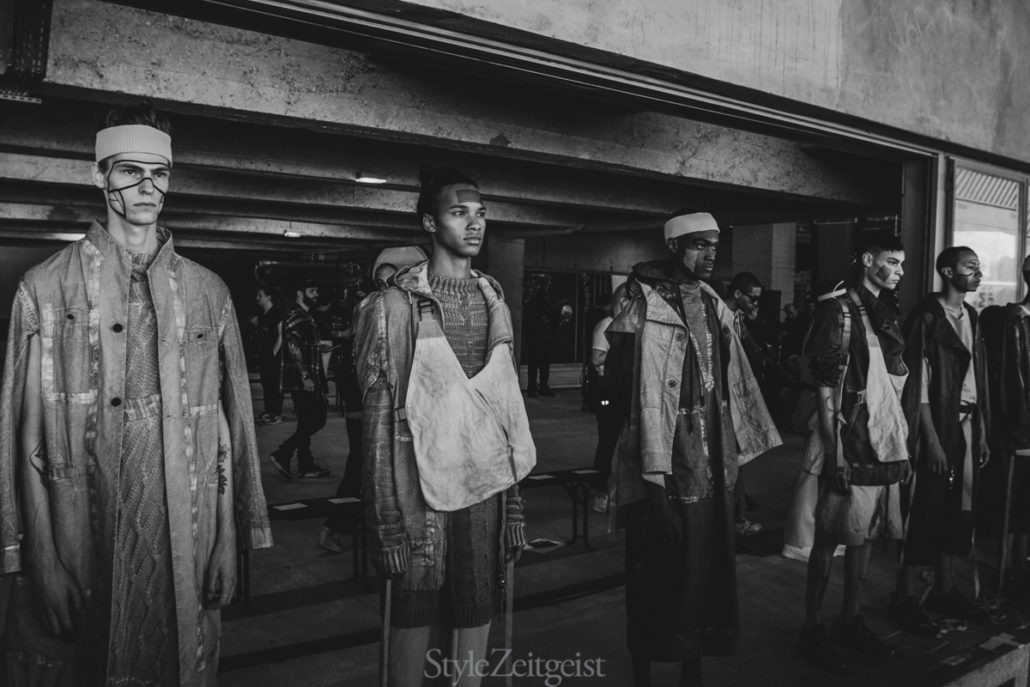 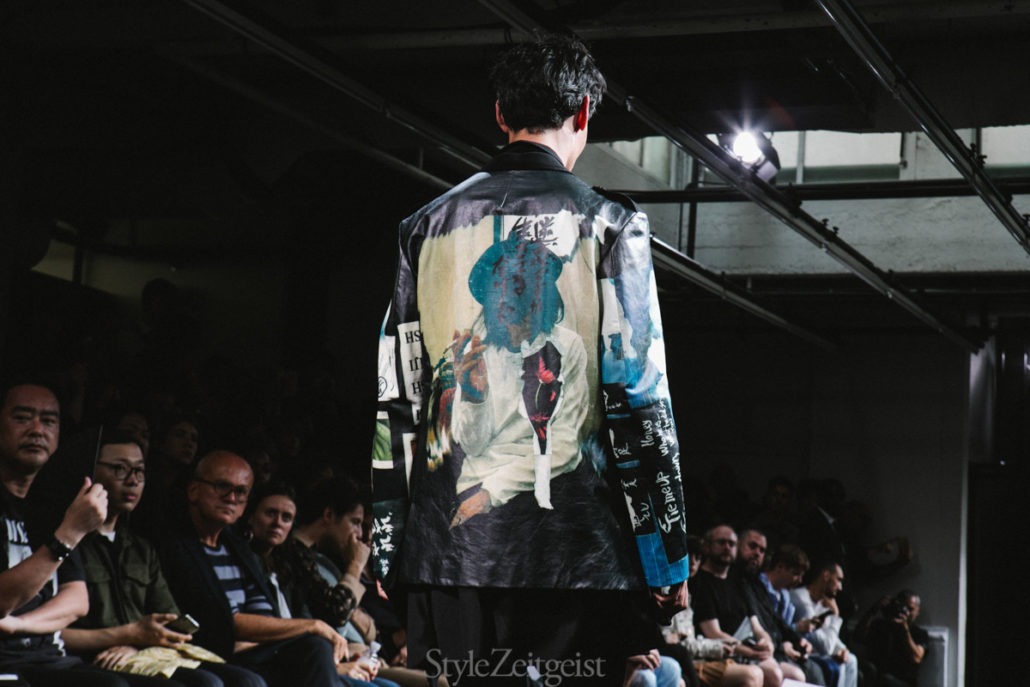 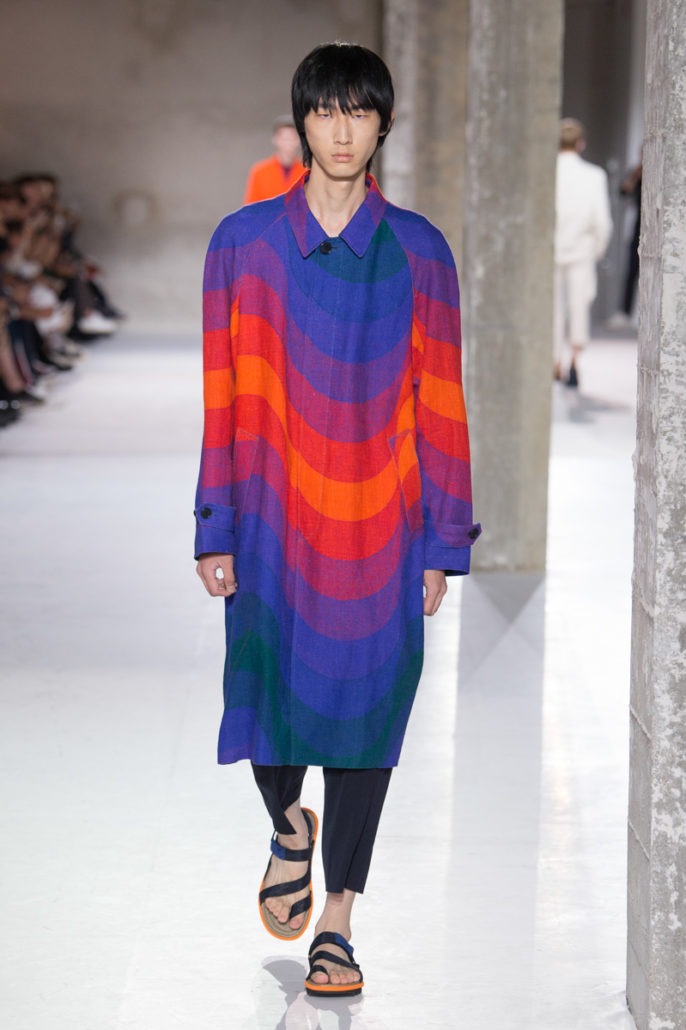 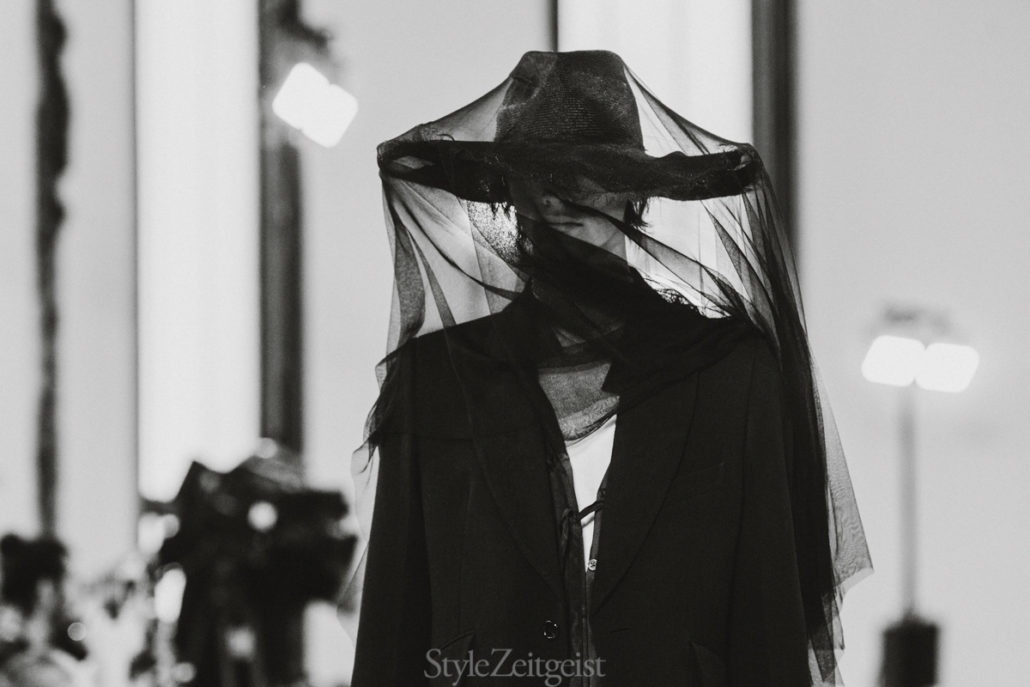 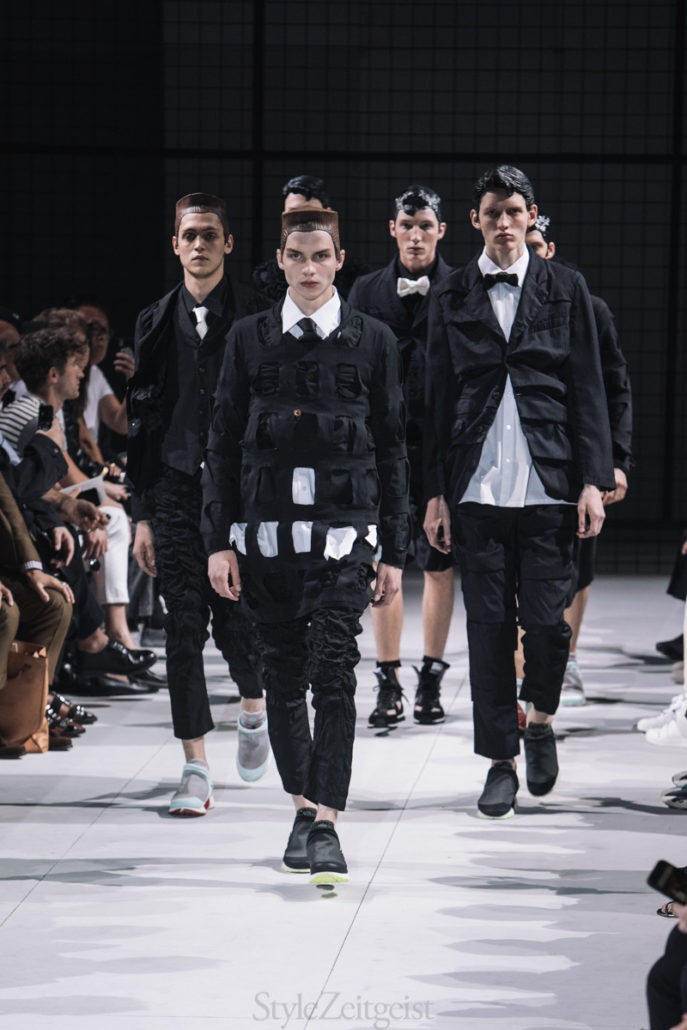 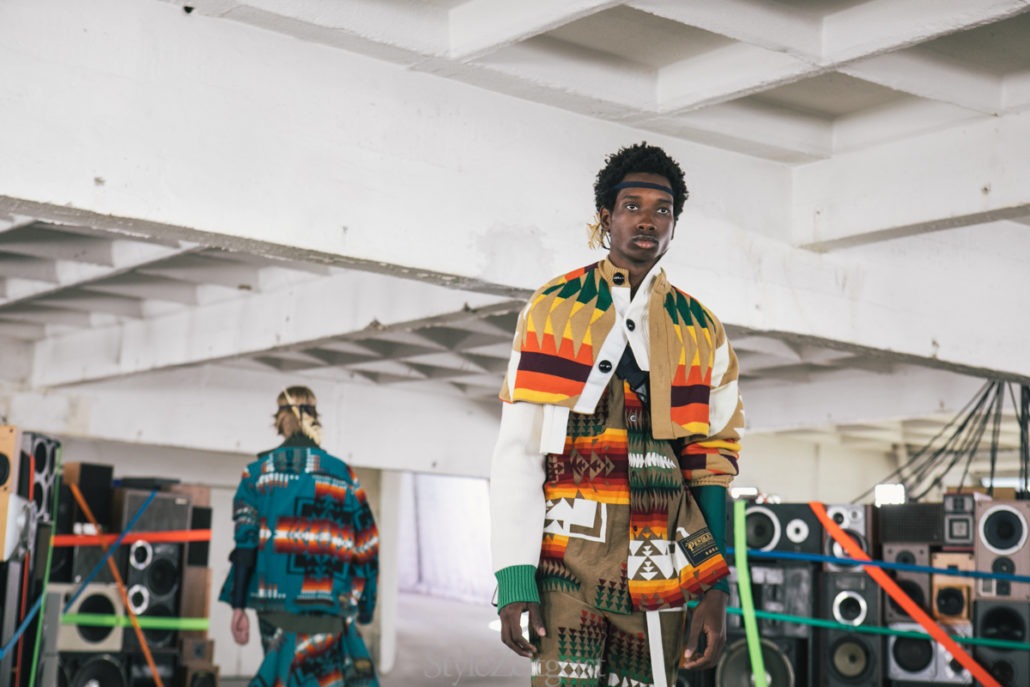 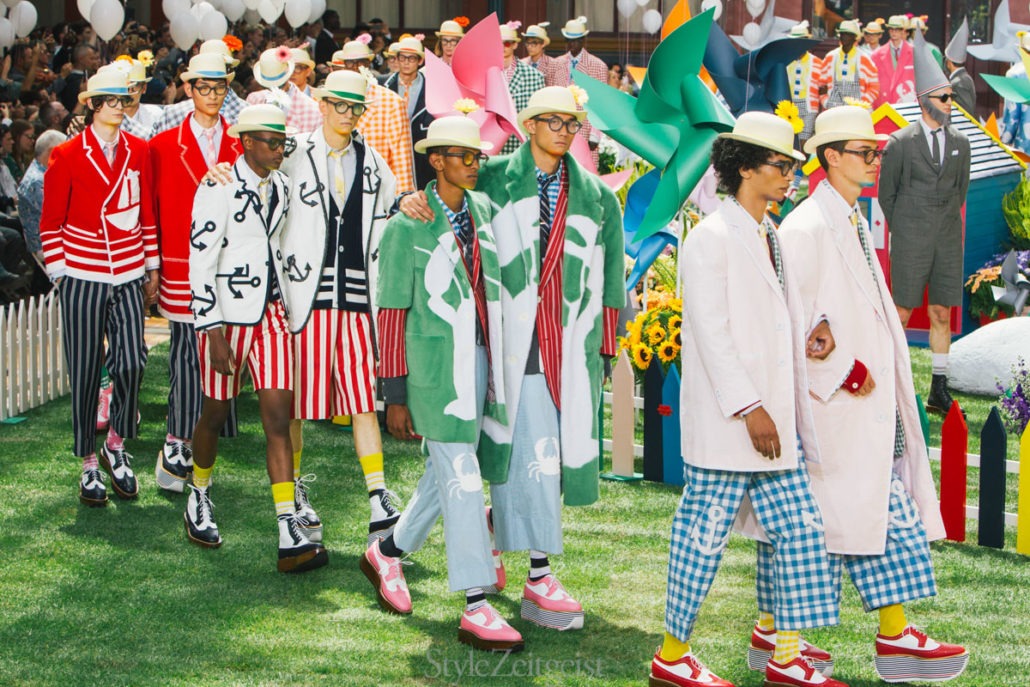 The fashion calendar is getting weirder and weirder. Houses combine shows, or inexplicably move ready to wear to couture calendar, or show off-schedule, because do designers really care about the likes of the CFDA and FHCM when they have Instagram? At least that’s how it felt the first day of Paris, where Undercover showed its first ever menswear Paris collection, and where Raf Simons showed off-schedule, which obviously prevented no one from schlepping god knows where to see another standing-only presentation.

Oh, Undercover, where Jun Takahashi has learned to push the buttons of those of us who value cult cultural artifacts. Or cult subcultural artifacts. These days we hear (and say) all the time that subcultures are dead. Not if Takahashi has anything to say about that. Inspired by the film The Warriors, in which a New York gang traverses the city clashing with its rivals, Takahashi presented a collection of fashion gangs, with names such as the Dead Hermits and the Bloody Geekers, each with its own characteristics, and of course, their own uniforms. Each gang marched out in unison, then broke up, stomped around the stage and left to give way to a new one. Which gang is the StyleZeitgeist audience? The Vlads, obviously, because it was all goth galore and a Bauhaus soundtrack. Dracula would be pleased and so was I.

From Bella Lugosi’s Dead at Undercover to Bella Lugosi’s Dead at Raf Simons; it was the soundtrack of the day (Sebastien Meuneir also used the song at the last women’s Ann Demeulemeester show). Same song, same fascination with youth culture, but how fresh it felt at Undercover and how underwhelming at Simons. The satin coat overload he sent down the runway did no one any favors. I can think of very, very few designers who can make satin work (Haider Ackermann in his imaginary boudoir, for example). The few decent styling ideas that came after – short sweaters over long dress shirts – Simons already stamped in our minds. There were also print tees and very covetable print backpacks, but they were overshadowed by the satin. Simons has not touched my heart in a while, which is saddening. But it was not the first time I heard someone say that he seems to be stuck in perpetual midlife crisis, and that perhaps a radical departure is due. I wondered why that is, and I honestly think it’s the weakness of his designs, and perhaps in turn they are weak because his heart is not in it anymore. I cannot think of any other reason why Undercover can mine youth culture with phenomenal results and Simons cannot. But the two designers are friends and so after Raf’s show we were treated to a combined Undercover/Raf Simons afterparty, which ended the night on a happy note.

From up to down and up again, the rollercoaster of shows was at its highest at Rick Owens, whose presentation was nothing short of a triumph of design and showmanship. Titled “Babel,” it was all about chaos and confusion, juxtaposed against the natural human desire for control and structure, represented here in Owens’s fascination with Russian Constructivism. In clothes this clash was manifested with mega-wide snap-away pants in silk gazar and slim washed denim that sheathed the models’ bodies. But the most stunning were the silk mega-parkas that were covered in what Owens called “brutalist sequins.” Both the silhouettes and the materials wrestled with each other, but the winner was Owens himself, who proved again that there is nothing more precious, and increasingly more rare, in fashion than an auteur.

At the intimate Boris Bidjan Saberi show in the afternoon things were steady. Perhaps too steady. There were dresses, and overly long straps that made no sense whatsoever, and there were gorgeous shades of gray for those of us who are taking baby steps from the all-black uniform (my direction is veering into olive/khaki these days), but after many seasons it all looked a tad too familiar. To be sure there was progression, but it was not radical enough to warrant a catwalk show. Something tells me the stores will stick to the tried and true, which will do no further favors to this solid, but ultimately unconvincing collection.

If Saberi’s presentation felt familiar, Yohji Yamamoto’s felt downward tiring. It was as if the designer took leftover clothes and the soundtrack from his previous show and decided to make a sequel. But Hollywood has taught us long ago that most sequels suck. And here were more black gabardine jackets and hakama pants, more slow walking models giving each other and the public the eye, more prints with vaguely sexualized females, kanji, and “Yohji is..”, more guitar strumming. In the stifling small showroom space it felt all the more stifling. Perhaps the designer is stifled himself and we are all just going along for the (very expensive) ride.

The show rollercoaster rode back up with the energizing show of Dries Van Noten. One of the show notes simply said “Optimistic,” and that’s how it felt. There must be a new level of trepidation, in a good sense of the word, with Van Noten’s recent sale of the majority of his company to the Spanish fragrance conglomerate Puig, and the dynamism of the presentation showed it. There were very few prints, mostly a variation of undulating waves done in Panton colors. It was a rare chance to use the famous Panton colors in clothing and Van Noten went all out. The dramatic reds and blues jived well with the pared down silhouette and the juxtaposition of cottons and linens against the uber-technical nylon worked in the designer’s favor.

Thursday morning at Junya Watanabe showed us again that his menswear has become a formulaic afterthought, and that a lion’s share of his creativity goes into making women’s clothes. Denim – check, workwear – check, technical fabrics – check, camo prints – check. One cannot help but keep asking that Watanabe brings his considerable talent back in the service of men. A man can dream.

Things went from bad to worse on Thursday at Ann Demeulemeester, where we were treated to collection by Sebastien Meuneir so effete that it made your very skin turn pink. Flowy, flouncy, frilly – it was an emasculating, embarrassing mess. Let’s get one thing straight – while Ann Demeulemeester herself gravitated towards sensitive, romantic men that were not afraid to show their feelings – her men, and most definitely her customers, remained decidedly masculine. Who this collection was aimed at is beyond me.

At Comme des Garcons that evening, a booming techno soundtrack accompanied a collection I can’t quite wrap my head around, which is usually a good thing. The press notes said that Rei Kawakubo finds the current omnipresence of streetwear boring – AMEN TO THAT! – and hence she wanted to double down on the strong tailoring aspect of CDGH+ by pushing the notion of the suit as far as possible. The collection was called “Crazy Suites,” and that’s exactly what we got. There were cut up suits, cut out suits, suits with flying sleeves, suits in black and all the grossest colors imaginable, and gingham and stripes and ruching and on and on. I loved the theme more than I loved the execution, though something tells me that up close we will see genius feats of garment engineering.

Saturday was my last day of the shows, since Thom Browne mercifully moved his customary Sunday evening spot. But first it was the phenomenal Sacai show, where Chitose Abe continued digging deeper with her experiments in splicing clothes with awe-inspiring complexity. This time it was denim merged with nylon and suiting, Navajo prints reworked from Pendleton fabrics in summer weights, souvenir jackets with bird prints, and so on. I loved the parkas where the sleeves were cut open in a way that looked like bird wings. And, yet, as naive as it may be it made me think of the strange beauty of Native American myths rendered in cloth. It touched a spot in the kid who sucked in James Fenimore Cooper’s novels like air.

To Thom Browne, then – who staged a childhood extravaganza of a stage set for his show that felt sweet and innocent. A side note – there seemed to be quite a few designers going back to the time of life when one is more innocent, sweeter, less menacing. For Browne it meant creating two sets of identical clothes – one oversized and one regular. None of it coalesced until the end of the show when the models came out in pairs. One half of a pair would suddenly look like they were wearing their father’s, or perhaps their older brother’s clothes, and the other half would grow into the same garments as time passed. The finale was reminiscent of the Spring/Summer 2004 Undercover women’s show, in which Jun Takahashi sent twins down the runway in different version of the same outfit, but here it was done for a very different effect, and I have no axe to grind on that account. As for the clothes themselves – well, you know the drill by now. They were fantastical and fantastically made and much of it probably won’t see the light of day as far as store buys go, but they surely made a good fashion moment.

And so it was a very uneven week, with ups and downs, with – for whatever indecipherable reason – highly anticipated debuts from Virgil Abloh at Louis Vuitton and Kim Jones at Dior (both bland, as expected), and mostly with people trying to figure out what the hell men’s fashion exactly is today and what it is exactly they should be doing. Not that there is much to figure out here – fashion has become a thoroughly postmodern, anything-goes thing. It’s gotten big enough to let men do their own thing – sneakers and white socks or suits, or whatever. “WHATEVER” seems to be the operating word. Even show attendees largely stopped caring. I’ve never seen so little effort put into what a lot of people wore to the shows, the Rick Owens tribe notwithstanding. But those are hanger-ons. As for the professionals, it looks like our long, enervating days, traversing Paris, hours of waiting, and the pressure of deadlines – we have finally learned what the masses have learned a long time ago – comfort is king. Though it really is too bad.