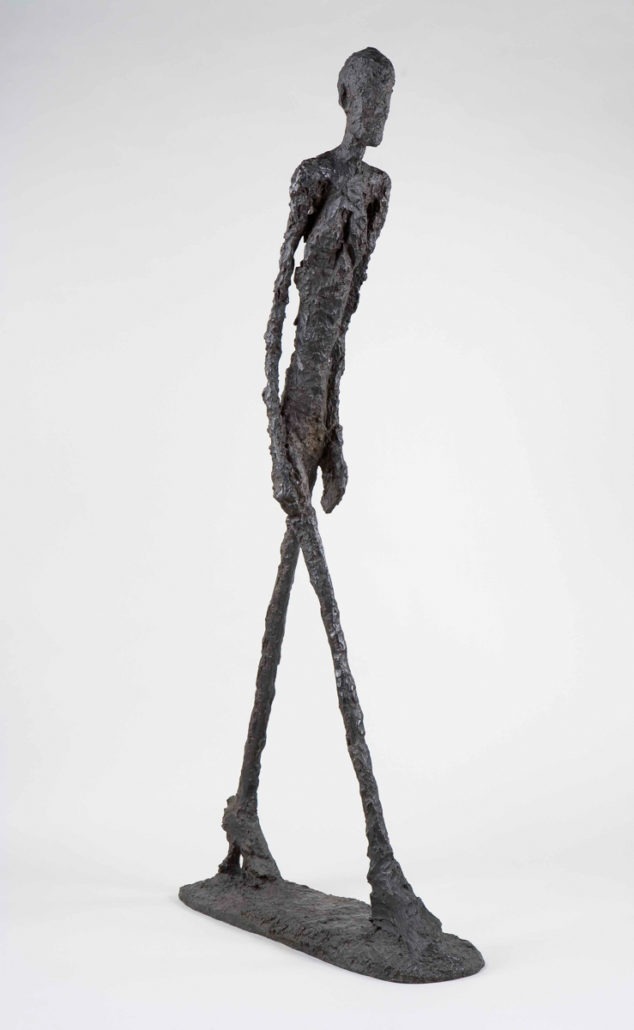 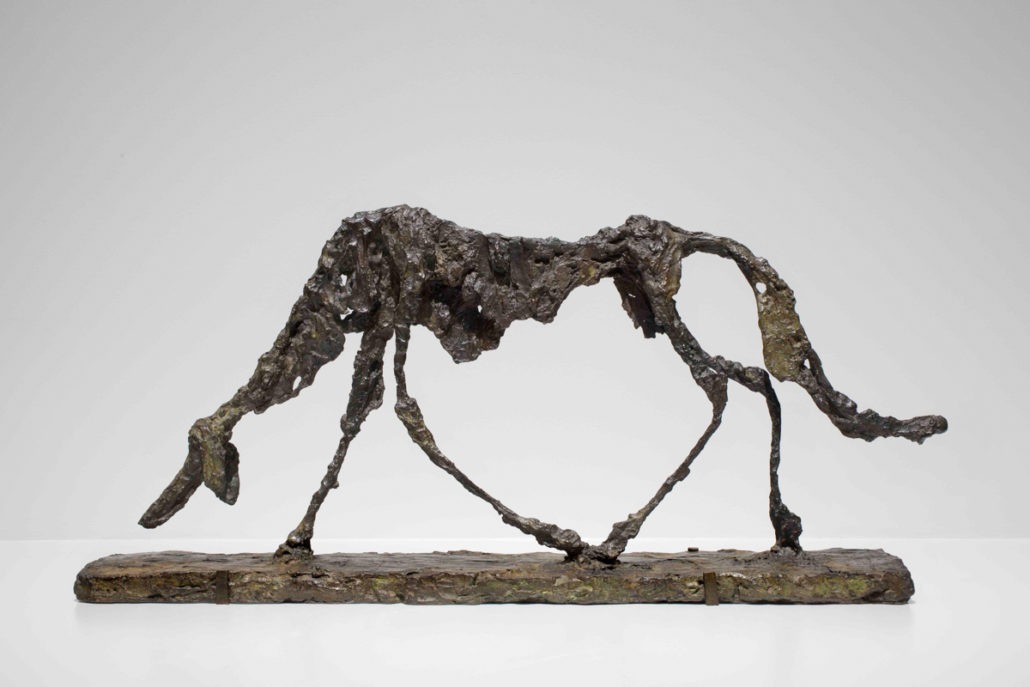 The Swiss sculptor Alberto Giacometti, who spent most of his working life in Paris, is by now widely considered to be one of the most important artists of the 20th Century. He is mostly known for the elongated, gaunt silhouettes that he have rendered again and again in bronze and plaster. These, and many others can now be seen at a major retrospective of the Giacometti’s work at the Guggenheim museum in New York, featuring nearly 200 artworks.

Giacometti has been making sculpture since the 1920s in a tiny studio in Paris, which he maintained long after he became famous (and presumably rich enough to afford a larger space). Like many great artists, he struggled with self-doubt about his merit as an artist, yet he continued to work ceaselessly, even during World War II, whose damaging effects he has largely been spared by waiting it out in the neutral Switzerland. But he did not escape the postwar anxiety and a sense of dismay and reckoning that Europe was going through in late ‘40s and ‘50s. It was during these postwar decades that he has honed in on his signature silhouette proper and became famous for it. One of the first sculptures you see upon entering the exhibit is “Walking Man” – it is the very definition of anxiety rendered in bronze.

The exhibit is organized in a straightforward chronological manner, which the Guggenheim, with its continuing wraparound space lends itself to nicely. Each floor represents roughly a decade, but more importantly it allows one to see the sculptor’s creative growth. We see Giacometti’s work from the ‘20s, with its representational touch, and then from the ‘30s, with its obligatory nods to surrealism, cubism, primitivism, and Brancusi, as the spirit of the time demanded. Of these perhaps the most fun one is named “Disagreeable Object.” If you guessed that it’s a phallus, you guessed correctly, and please feel free to continue that train of thought. There is also an obligatory bust of Simone de Beauvoir. (Was there any artist in Paris who did not pay homage to her in one way or another?)

But the heart of the exhibition lies in the aforementioned ‘40s and ‘50s. Existentialism was all the rage in Paris, and Giacometti was friends with Jean-Paul Sartre. Giacometti’s appeal is that his sculpture is existentialism personified – Camus in plaster and bronze, if you will. One of Giacometti’s masterfully existentialist works on display is Three Men Walking (his self-explanatory titles seem almost besides the point), only the men are all walking in different directions, self-absorbed, not meeting each other’s gaze, perhaps noticing each other from the corner of one’s eye, but not really seeing or wanting to see.

The sculptures are brilliant, but the secret ingredient of the Guggenheim exhibit are Giacometti’s drawings. I did not realize what a prolific draughtsman he was, and his drawings are an important addition to his sculptures – they are at least as bleak and subject-effacing, full of lead, both literally and figuratively.

Different things are important to different artists. For Giacometti it was the fundamental idea of art – that is how the artist sees the world, not with eyes as mirrors, but trying to penetrate the mirror of the surface and get to the essence of things. “I am very interested in art, but i am instinctively more interested in truth,” he had said. That idea preoccupied Giacometti until his death in 1966. He never quite knew whether he succeeded, but we surely do.

Giacometti at the Guggenheim Museum in NY, through Sep 12th, 2018 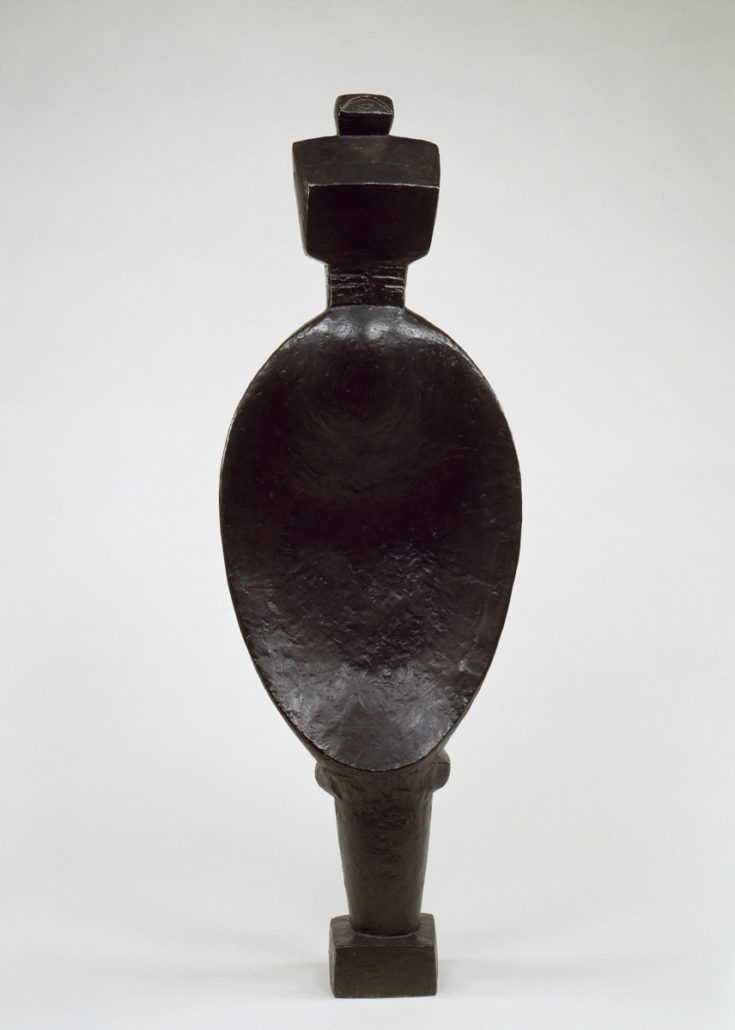 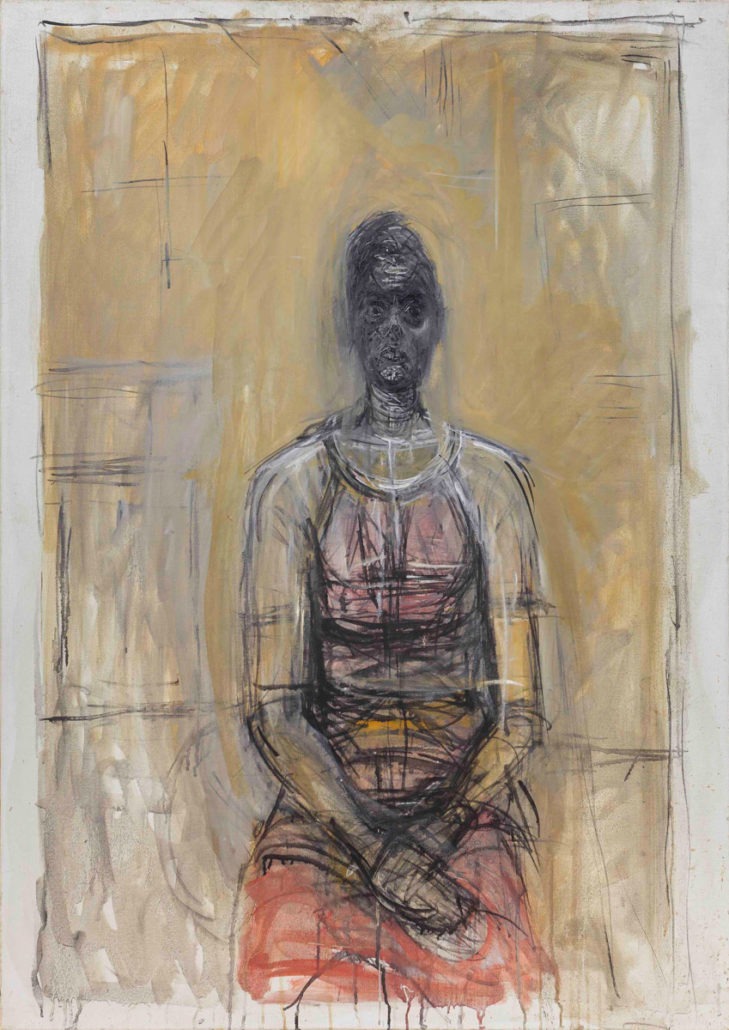