When Fashion Becomes Farce: Eckhaus Latta at the Whitney 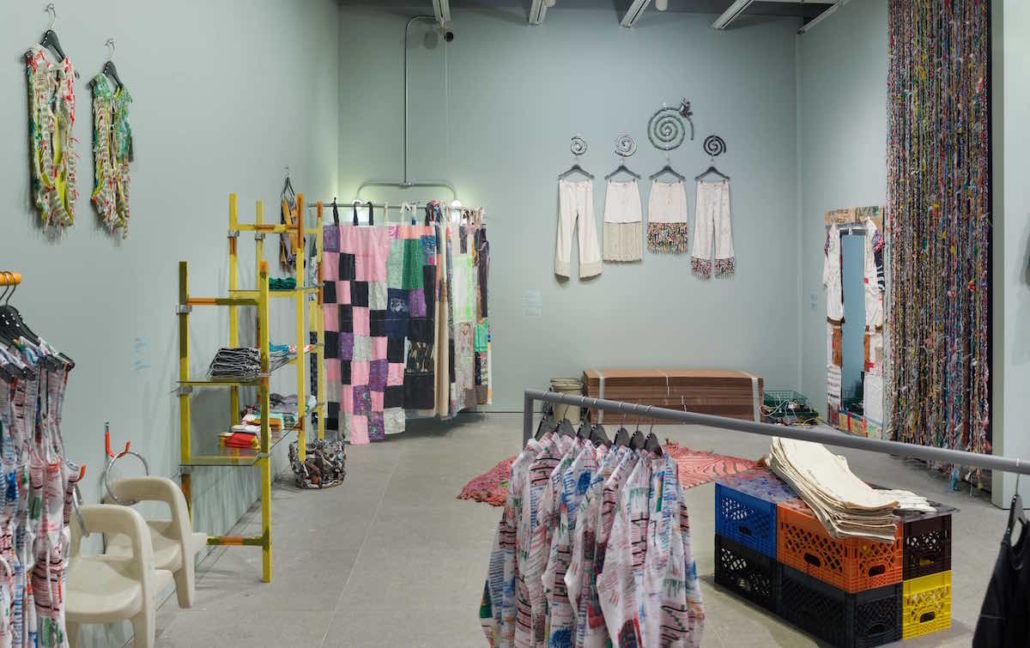 It is no news that museums have been staging fashion exhibitions left and right in order to prop-up the numbers of museum goers and stay (pop)culturally relevant. This is not necessarily a bad thing. It is true that museums were originally conceived as institutions of cultural aspiration. It is also true that museums were conceived as public institutions, and serving art to the masses is their goal. Back in the day when the main, progress-minded current of thought was that the unwashed masses will naturally want to find emotional uplift through art, the two goals were not in contradiction. Today, when mass taste has won a decisive victory and everything has become entertainment for the vast leisure class, they certainly are. The shift towards art populism began in the sixties and is enjoying its heyday now. This was well documented in the much overlooked documentary The Mona Lisa Curse by the art critic Robert Hughes (I highly advise you watch it).

This is no knock on the costume departments in multiple museums that have done an outstanding job of showcasing the creative potential of fashion. I’d argue that the Alexander McQueen exhibit at the Met was more rewarding than many art exhibits I have seen. So was the incredible retrospective on Jean-Paul Gaultier. I could go on. But plenty of times a museum can get it wrong. Enter Eckhaus Latta: Possessed at the Whitney – an abomination so preposterous that I’ve wondered if it’s worth addressing at all.

To call it an exhibit is actually misleading. Rather, what you witness when you walk into a room off the Whitney’s lobby, without paying an entrance fee, is a pop-up shop with some art-school level window-dressing, such as a “bench” made from layers of cardboard boxes taped together, a couple of stacked milk crates in lieu of a shelf, and a patchwork curtain for the fitting room. There is also a small room with security footage, some of it live from the shop. If it was supposed to be some art-student commentary on our Orwellian society, I assume it could’ve gone down well when Eckhaus Latta were first-year students at RISD. At the Whitney, not so much.

Eckhaus Latta has for a while been a downtown fashion hipster darling, for reasons I cannot entirely fathom. I suppose it’s kind of quirky and the designers are friends with all the right people, and that’s all I can think of. The stuff I’ve seen looks more homemade than house-made, more Etsy than Margiela. So it was with the offerings on display. I assume that the hipsters behind the sales counter, who reeked of self-consciousness, were EL acolytes and not museum staff.

The reasons for this charade seemed pretty obvious – the Whitney is hoping to secure a hip clientele and show that they are “with it,” and Eckhaus Latta gets to be at one of the most respected art institutions in the country. Something about breaking barriers of elitism and all that stuff. I already anticipate “Well, art is commerce and so this is much more honest,” kind of infantile reasoning of the exit-through-the-gift-shop variety. And while it’s true that museums are forced to operate gift shops in order to secure much needed revenue, the exhibits are still the draw, and not the other way around.

I would stop right here with a chuckle – after all the whole thing is a silly blip on the museum culture radar, were it not for the heaps of ridiculousness I was self-forced to digest in the media that reported on this fashionable fiasco. The New York Times was appropriately restrained, though I would answer to its introductory statement, “Whatever you call the Whitney installation by the label Eckhaus Latta, you’re likely to leave with more questions (and clothes) than answers,” with a resounding, “Oh, I left with answers, alright, and they weren’t good. And you can keep the clothes.”

What confounded David Colman, the article’s author, was obvious – what the hell was THIS doing at a museum, let alone at the Whitney? Being appropriately postmodern, the Eckhaus Latta designers dodged all of his questions attempting a more or less clear definition of what they are and what this was. But the crown jewel of this Emperor’s New Dress moment was the assertion by Lauri Freedman, the Whitney’s head of product development – this was her first, and hopefully last foray into curation – that Eckhaus Latta “are stewards of their ideas in a way that is fully holistic.” This shining example of artspeak will perhaps go down in some dictionary of bullshit art people are taught to resort to when they have nothing to say.

Dazed and i-D, the millennial style bibles staffed by millennials, behaved accordingly. The authors were also clearly confounded. One could see the “What am I supposed to write about here? I don’t get this at all but it must be something – I don’t want to look like I don’t get it,” thoughts flashing between the lines. Hannah Ongley of i-D resorted to reportage instead of analysis. I mean, who is she to judge, right? Her article’s headline read “Eckhaus Latta’s Whitney Exhibition Will Change How You Think About Shopping.” Will it, though?

Dazed was automatically congratulatory, as per usual. “Five Reasons to Go See Eckhaus Latta’s Extremely Meta Exhibition” yelled its clickbait title. In fact there are zero reasons to go see the “exhibition,” but Ok. The first reason will blow your mind – ready? “It’s like a conceptual shopping experience”!!! It all goes downhill from there: “You’re supposed to try things on” and “You can actually buy stuff.” Ok, then.

But even worse than this verbal apoplexy was the article from Artnet News, which again proved that for all the hot air it’s filled with, fashion’s got nothing on art. The headline claimed no less than, “At the Whitney, Alt-Fashion Icons Eckhaus Latta Revolutionzie the Way Museums Exhibit Couture.” “Surely, this must’ve been written by an AI algorithm,” I thought, rubbing my eyes to double-check whether I just read the words “Icons,” “Alt-Fashion,” “Revolutionize,” and “Couture” in one sentence. The intro trumpeted this as “the first fashion fashion-related exhibition at the museum in 21 years.” If that’s indeed the case, than perhaps the Whitney should quit while they are ahead. I was convinced that the author, Taylor Dafoe, did not actually go and see the “exhibit.”  But, he did. He rambled on about breaking down the barriers of elitism and some such – in 2018? I lost interest half way into the piece, and I am not afraid to say it.

Whenever I review an exhibit, my baseline is always the same – go see it and judge for yourself and let’s compare philosophies after. With Eckhaus Latta: Possessed – allow me to change it up. Don’t go. Stay away. It’s horrible. And for god’s sake, don’t repeat my mistake and read about it.

Photo courtesy of the Whitney museum