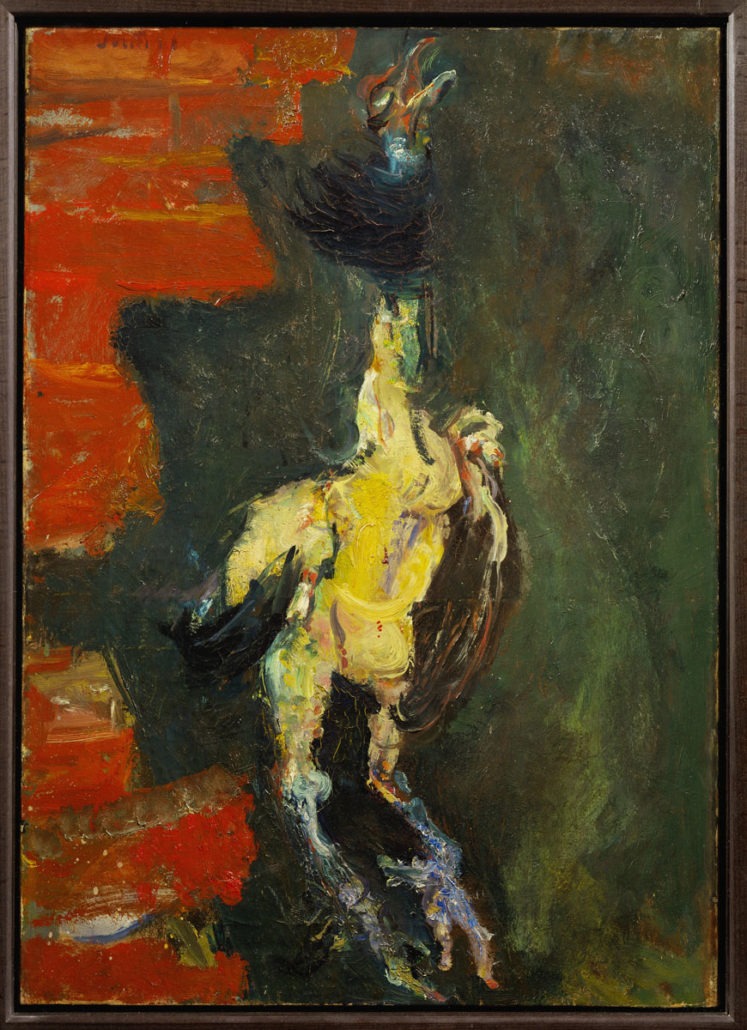 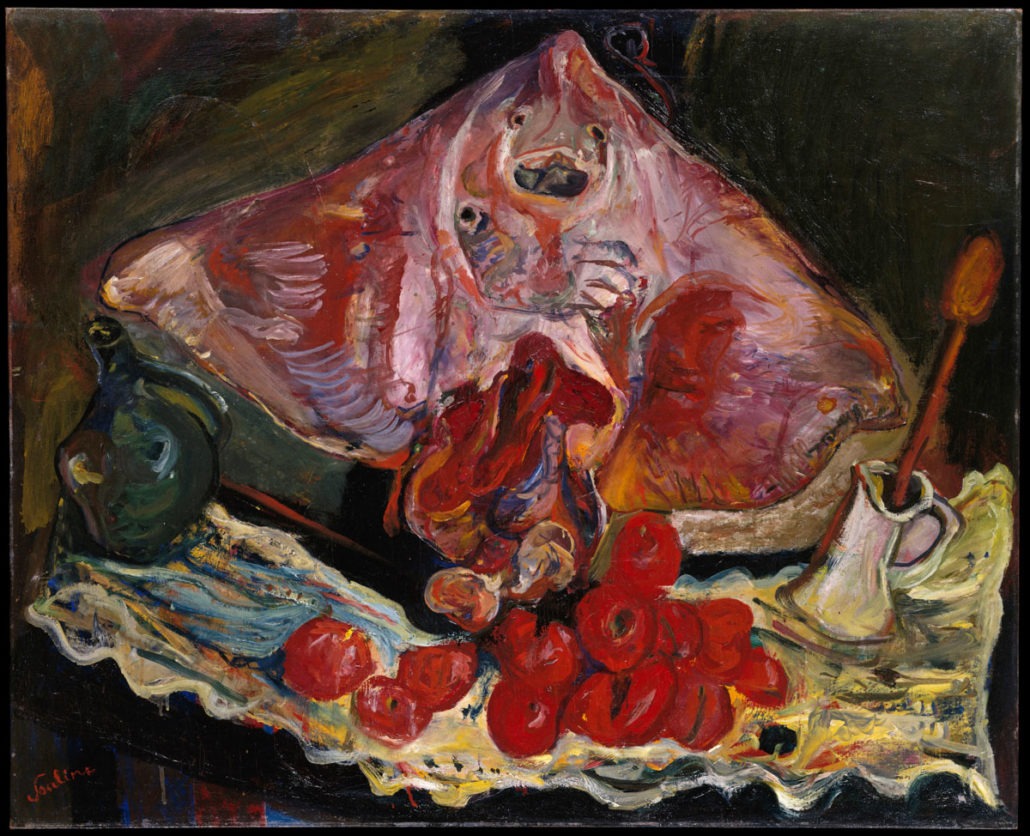 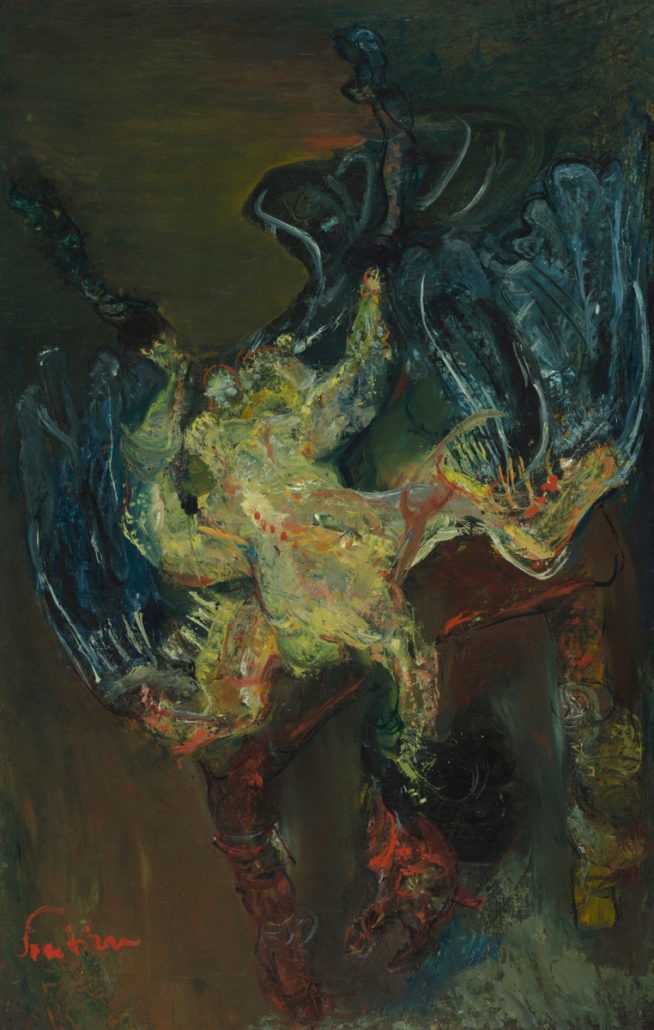 I generally try to see every exhibition of Chaim Soutine’s paintings that I can manage to get to and of those that I can’t I try to track down the catalogue. Why this is so is hard to pin down, but similar perhaps to the way I used to rush out to get Ramones releases: you knew what you were going to get before you got to the record shop but regardless you knew it was going to be good because it was going to be consistent.

Much of the commentary on Soutine attributes his success to the vibrancy, expressiveness, and sheer raw power packed into his canvases (think the flayed oxen, barely contained in the frame, the bellboys, unstable yet fixed, the Ceret landscapes, ready to whirl off the canvas). That said, I wonder if the cultish devotion to these paintings can be attributed to their directness and legibility. A London Review of Books write-up on the Catalogue Raisonne sums up this notion in noting that for Soutine:

“There are no manifestos, no long interviews, he wasn’t part of a group endeavor, a school, a theory of painting. Soutine did not advance over ground cleared by heavy critical artillery; he was a collector’s painter. His are physical pictures: physical in their emphasis on the quality of paint as a coagulating, smeared substance; physical in their emphasis on the flesh of animals, on human faces and on landscapes which are blown about like trees in the wind — all things animated. Soutine’s intentions, the way the work of other painters may have influenced him, can only suggest ways of looking. In the most important matters the paintings must speak for themselves. What is at issue is not what Soutine felt and thought as he thrashed or stroked a canvas but how we feel and think as we look at the results.”

And so while knowing about Soutine’s impoverished background as a Jew in Minsk, his heady (yet still poor) first years in Paris, his early friendship with Modigliani, then the breakthrough success when the American collector Albert Barnes scooped up dozens of paintings in one acquisition, his gastric medical issues and consequent inability to eat what he could finally afford, and his untimely death in Paris from the same medical conditions while hiding out from the Nazis, somehow knowing all this (or not knowing for that matter) does not decisively factor into experiencing the paintings. Or, at least not as much as it seems it ought to.

The 32 paintings on view in the Jewish Museums’s show, Chaim Soutine: Flesh, present a tightly focused grouping of hanging fowl, beef carcasses, hare, fish and rayfish. “These works epitomize his fusion of Old Master influences with the tenets of painterly modernism.” As the Museum notes, “Virtuoso technique, expressive color, and disorienting and unexpected compositions endow Soutine’s depictions of slaughtered animals with a striking visual power and emotional impact.”

The gut-punch immediacy of that impact comes right from that sense of “legibility” in the same sense that punk is more legible than classical rock, chamber music more than symphonic music, or for me, living in New York City, the Chinatown streetscape more legible than Midtown in that dumpling house, funeral home, and Chinese medicine pharmacy are more legible than the impenetrable facades of Midtown high-rises behind which your guess of what’s transpiring is as good as mine. Soutine is often paired with Francis Bacon in exhibitions and books based on what I would chalk up to the same intention of directness and legibility.

Standing in front of, say, Soutine’s upside-down, hanging, slaughtered turkey or a splayed-out hare, one can, yes, easily get lost in the brushwork, barely-held together composition, and the extreme use of color but then, one can just as easily pull back and the image snaps right back together, the formal qualities fall away and the general sadness over the loss of life represented by this particular dead creature vividly comes through. The oxen, as much as they represent a pinnacle of art-historical achievement in harkening back to Rembrandt’s Louvre painting, simultaneously come off as pictures of butchered meat.  The smaller paintings of dead fish, chickens, and hares all come off as animals that look as if they wanted to stay alive. They are sad and tragic looking.  There is not much grace and repose in death as presented by Soutine. This is evident whether one knows about Jewish butchering customs in 1920s Paris and what that all meant to Soutine, or not. But just in case I am mistaken, and biography is key to approaching these paintings, I share this story recounted in the same London Review of Books article:

“While biography can usually only dramatize the performance of making the paintings, not explain them, there is one story which sheds real light on Soutine’s long affair with dead animals. The memories he brought from the shtetl were not Chagall-like fairytales. He once spoke of watching the village butcher slice the neck of a bird and drain the blood out of it. ‘I wanted to cry out, but his joyful expression caught the sound in my throat.”  At this point in the story, it is reported, he patted his throat. “This cry, I always felt it there. When as a child I drew a crude portrait of my professor, I tried to rid myself of this cry, but in vain. When I painted the beef carcass it was still this cry that I wanted to liberate. I have still not succeeded.’”

Soutine may have not succeeded in ridding himself of the cry, but he managed to get the point across. Each and every time. That he managed to do so as a mere “collector’s painter” makes it all the more special.

The Jewish Museum show ends not with a culminating painting but with a small wall text. So small you can easily miss it on the way out. It reads:

“Epilogue. In August 1943, Soutine was secretly rushed from the countryside to Paris to receive urgent medical care — his chronic stomach condition had been exacerbated by the stress of hiding during the Nazi Occupation. To avoid detection, he was taken in a hearse, using a circuitous route. He arrived at the hospital more than twenty-four hours later and died during surgery.”

It continues, “Soutine was interred at the cemetery of Montparnasse. Among the few mourners were his companions, Marie-Beryhe Aurenche and Gerda Groth, the artist and playwright Jean Cocteau, and Pablo Picasso.”

Chaim Soutine: Flesh on view through September 16, 2018 at the The Jewish Museum.