The Culture Ltd. is the new underground clothing label designed by Misaki Van Kampen. The label is all about mega-anarchy and subversion of our rock-bottom zeitgeist. Our culture, and therefore fashion culture and streetwear culture in particular, is handicapped, castrated, and lobotomized, or in other words – limited. Hence, “The Culutre Ltd.” With her samurai scissors Misaki slashes at the inanities of trends, such as people buying band tees just because Justin Bieber told them. She takes no prisoners when she exposes the likes of Jerry Lorenzo for a talentless hack that he is with her Fear of Originality tee, depicting him as the grave robber of other designers’ ideas. On the back is the Fear of Originality Tour with hype stores instead of cities. You can also have a dumb iPhone case with its description on it, which is only as dumb as that Vetements hoodie you bought with its description on it. She gently pokes fun at designers she actually respects – there is a Rick Owens body pillow and a Raf Simons blanket. And so on.

Misaki is not a starving artist – well, she can’t starve because she is an anime character. That’s right – she is the first anime character fashion designer. Why? Why not? We already have virtual influencers and real life creative directors who don’t know how to design – this is the next logical step. If Heron Preston can be a designer, why not Misaki? She was virtually (wink, wink) turned out by every fashion school. But fuck the system – Misaki has the Internet and no shortage of gumption. She is described as a nice person and she works hard, just like Virgil Abloh! Perhaps one day she can take over Dior – you never know. We caught up with Misaki to learn about her line and to get her views on the culture, limited. 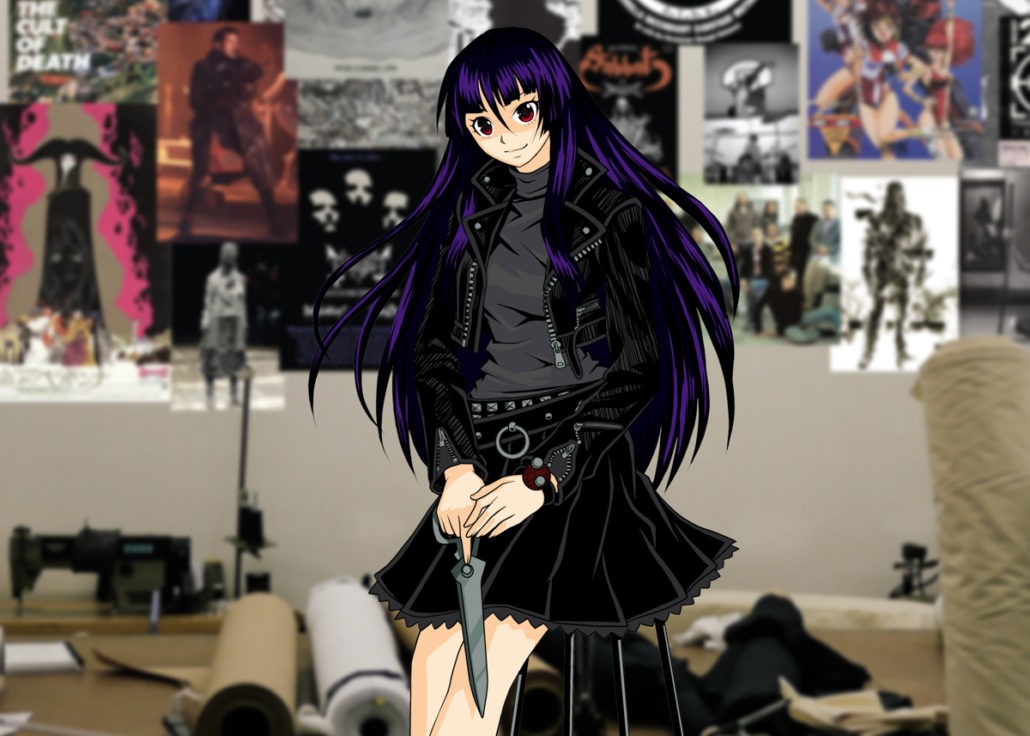 Hi Misaki. Let’s begin at the beginning. Why did you decide to make clothes?

I’ve been into clothes for a while but not as long as I’ve been into music. Heavy Metal and Punk Rock helped shape how I view the world. Much later I got into fashion. Martin Margiela, Sruli Recht, Jun Takahashi, and Rick Owens really opened my eyes. Until then I didn’t realize fashion could be subversive and transformative in the same way as music. I didn’t think I’d ever have a chance to make clothes until I met my former mentor Mr. Culture. He was the one that opened my eyes to fashion’s untapped potential. I’m making clothes because he believed in me.

How did you come up with the name for your brand?

Culture has become a commodity; it’s one of the last things you can’t create with an algorithm. Globalization is quickly erasing most of it and corporate entities are fighting over the last remaining scraps. With The Culture Ltd I want to draw attention to this fact.

The clothes you design, especially in their visual aspect, carry pointed criticism of the hypebeast culture that surrounds us. Could you elaborate on this aspect of your work?

Streetwear is just what’s popular right now, so it gets the majority of my criticism against fashion in general. It’s really just one facet of what I like to comment on though. It’s also something I genuinely like when it hasn’t been twisted into a hobby for increasingly wealthy children. Streetwear was originally a vehicle for social criticism and a refuge for fashions outsiders, I’m just bringing it back to its roots. 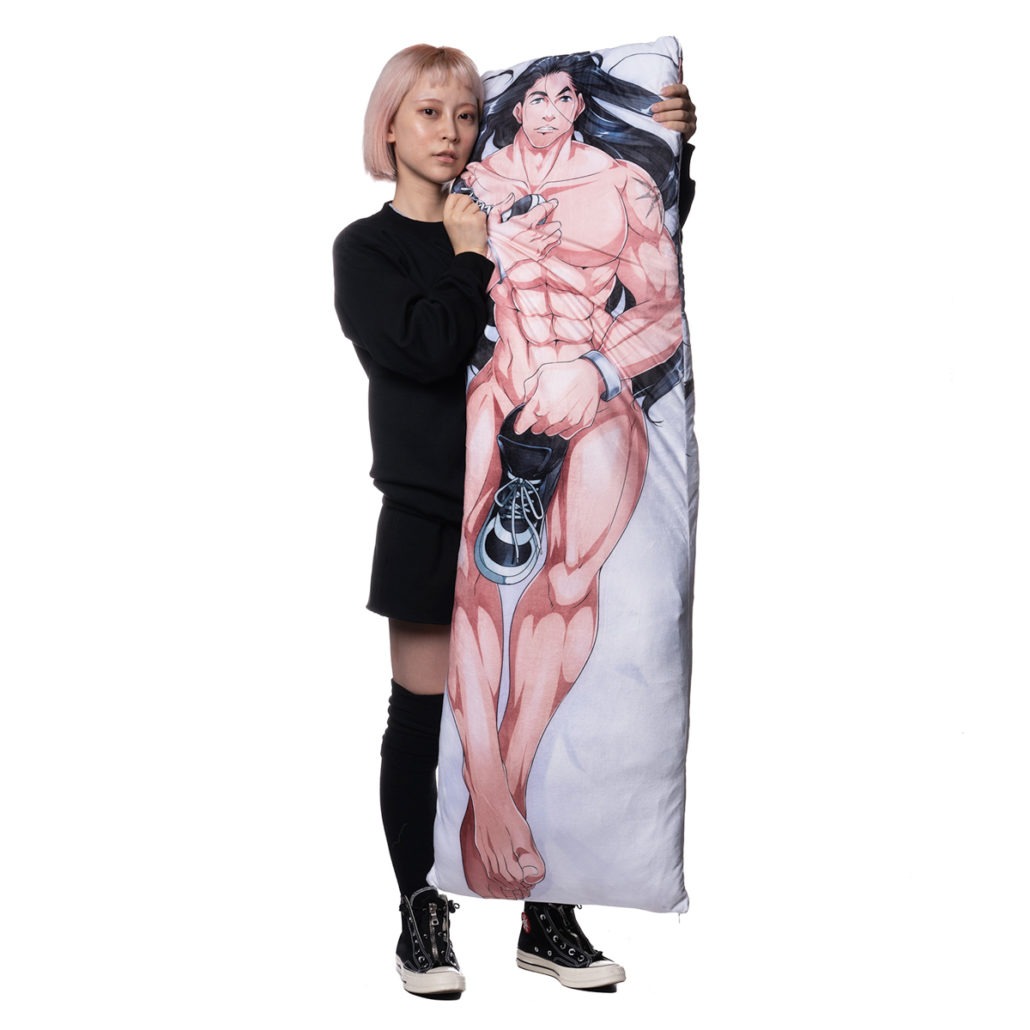 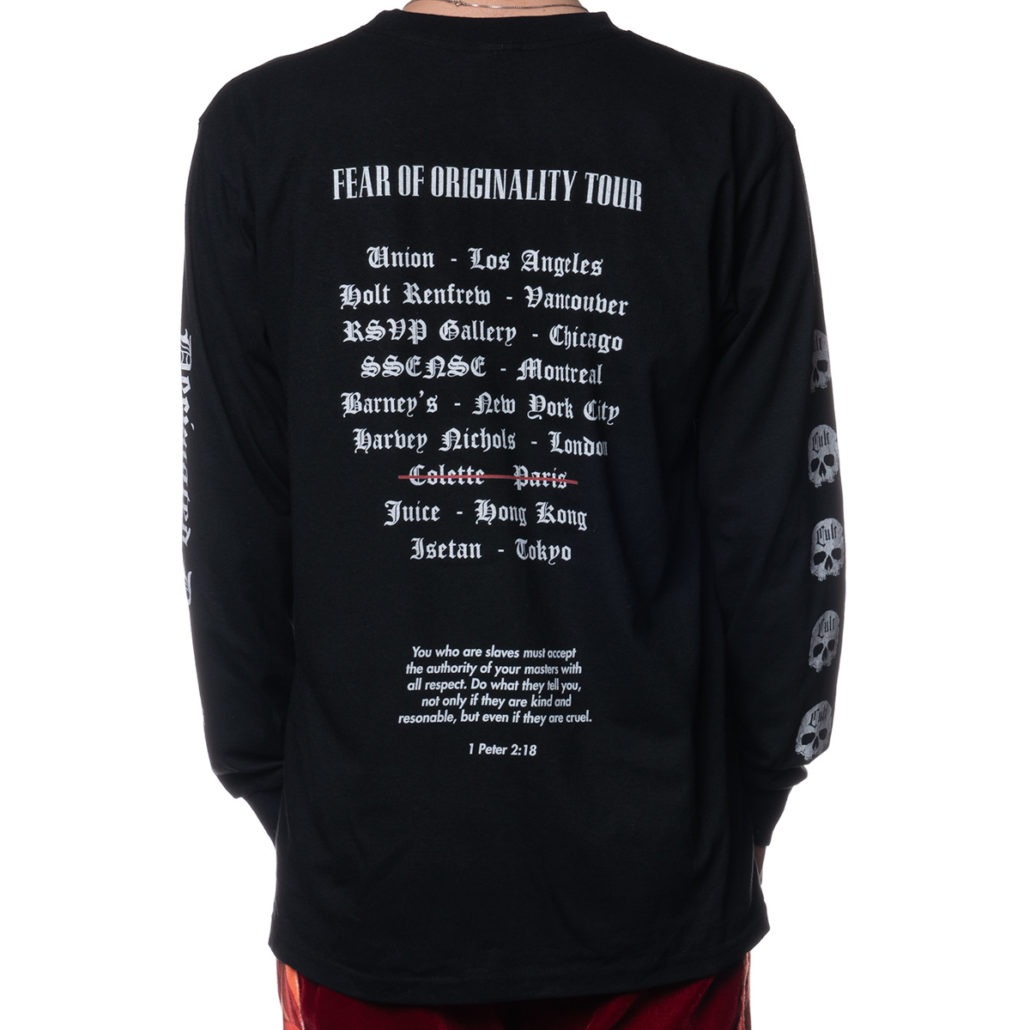 Pre-internet you had people who were willing to become totally obsessed with something. That’s the only way subcultures like Goth could happen, because a handful of people were willing to re-arrange their entire lives around living out an idea. Then everyone else fed off that energy. We don’t have the same thing anymore. We have aggregators and Wikipedia. We’ll reduce an entire genre of music into 15 albums and call it a day. In some ways I’m sad there’s not as many people getting deep into things, which is what lead to so much of the past great youth culture. On the other hand it’s interesting that people are just into so many different things all at once.

It seems that one of the problems today is that everything is surface, and that a lot of substance and meaning has been detached from its visual form. For example, all these people wearing band tees of bands whose music they don’t listen to. Your “Never Mind the Music” shirt comments on that. What do you think about this whole phenomenon?

We’re in the middle of a process right now where imagery is being separated from its meaning. As images are shared and sent around the world at lightning speeds, there’s simply no way for any real meaning to be maintained. Everything is fair game to become a picture on a mood board in some design studio. I don’t think people are aware of the influence this is having on fashion. Designers are all drawing from the same digital well. They’re all going to the same new arrivals page on SSENSE, they’re searching the same keywords on Google Image Search, they’re all following the same people on Instagram. Carl Jung spoke of a collective unconscious. I think what’s developing now is a collective digital unconscious. Everyone is sharing and seeing the same images and subconsciously it’s driving an unseen design narrative: one that is boring, superficial, and devoid of meaning.

If you sell clothes, is The Culture Ltd. the solution or part of the problem? How can you avoid cheap irony that permeates fashion today?

It’s a very thin line to walk. Every day is a battle to not give into cheap irony and cynicism. I don’t really care when someone like Demna Gvasalia falls into that pit and starts mocking the underclass. The bigger issue is when fashion gives him a pass, the idea that he’s getting paid, so everything he does is cool and alright when it’s just nihilistic and stupid. I hope people can see I’m sincere in what I do. The Culture Ltd is an entire creative universe. Fashion is in desperate need of criticism right now and that’s all I’m trying to offer. Another world someone can step inside, where these impolite thoughts turn into clothes. 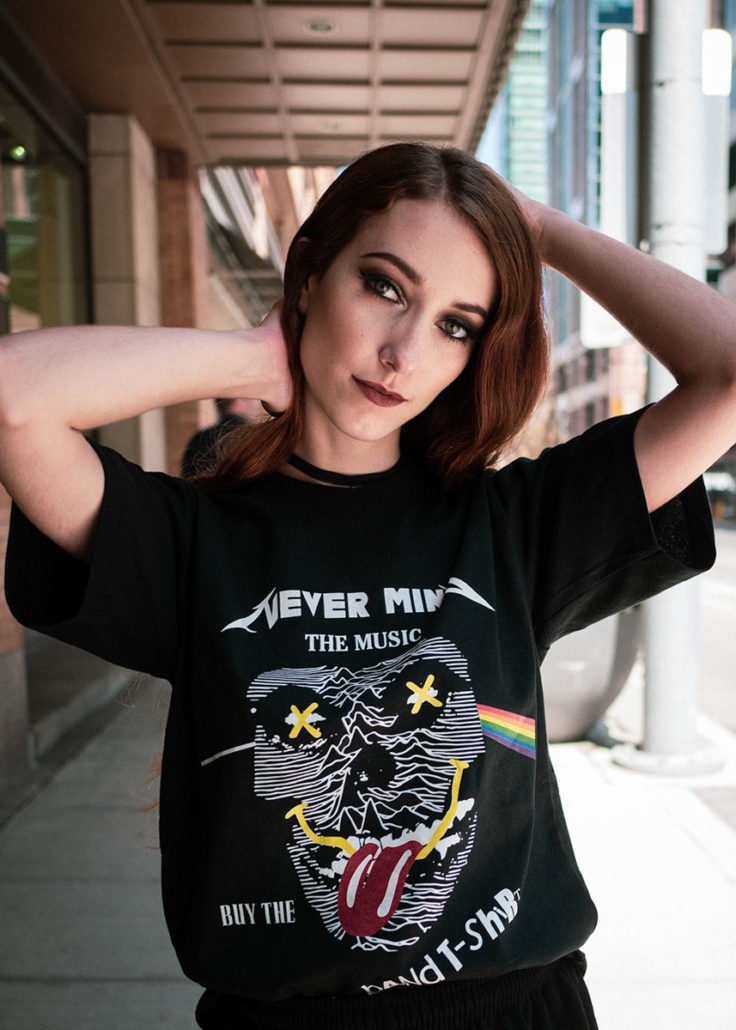 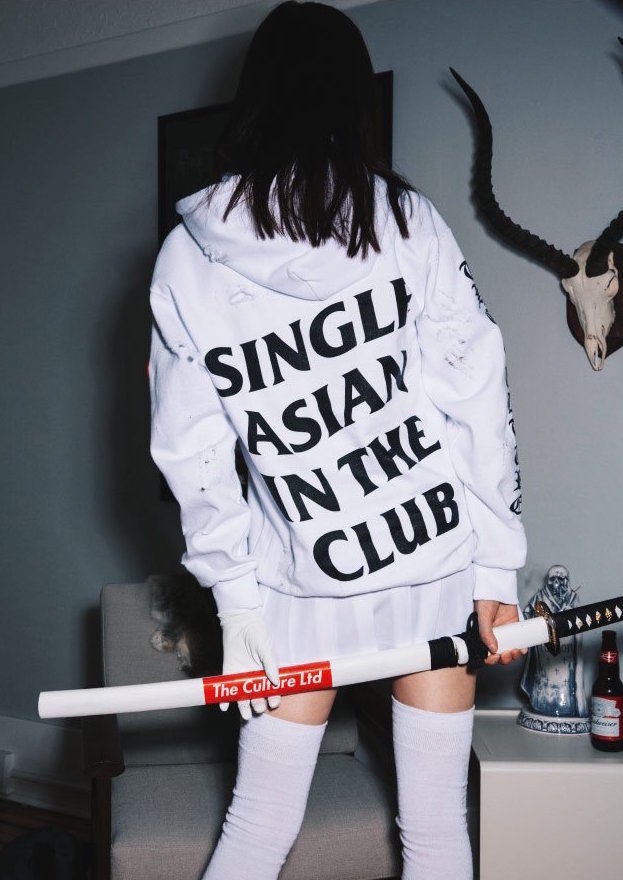 Speaking of cheap irony, Misaki, what are your views on Virgil Abloh?

I can’t fault him. He took every opportunity, advantage, and connection he had and utilized it fully. I’m sure he will be a case study in business schools for many years to come. With that said he’s one of my favourite targets of derision. Almost every idea he has is pirated from somewhere else. For someone who unabashedly steals everything he intellectualizes it an insane amount, which is just really funny. He’s like fashions Quentin Tarantino but Tarantino is very honest with his homage work. He doesn’t try to dress it up, he’ll tell it to you straight, he liked a scene from an old wuxia film so much he wanted to re-create it 1:1. Virgil will do the fashion equivalent and then give a 1-hour talk at Harvard about it.

Are you waiting with baited breath for a collaboration between Off-White and Supreme?

People should start calling these collaborations what they are. In this case a joint venture between The Carlyle Group and New Guards Group. In other words it’s a slide on a power point in a shareholder meeting in an office in some giant glass skyscraper. It’s going to be exactly the same as last year’s collaboration between The Carlyle Group and LVMH. It will be designed by a spreadsheet of sales data. It will look exactly how you are expecting it to look. It will have a perfectly manicured campaign that paid off journalists will hail as subversive. It will sell out and the world will keep turning.

Thank you for the interview opportunity! My new collection can be found at thecultureltd.com. Please come check it out and find something to be offended about. 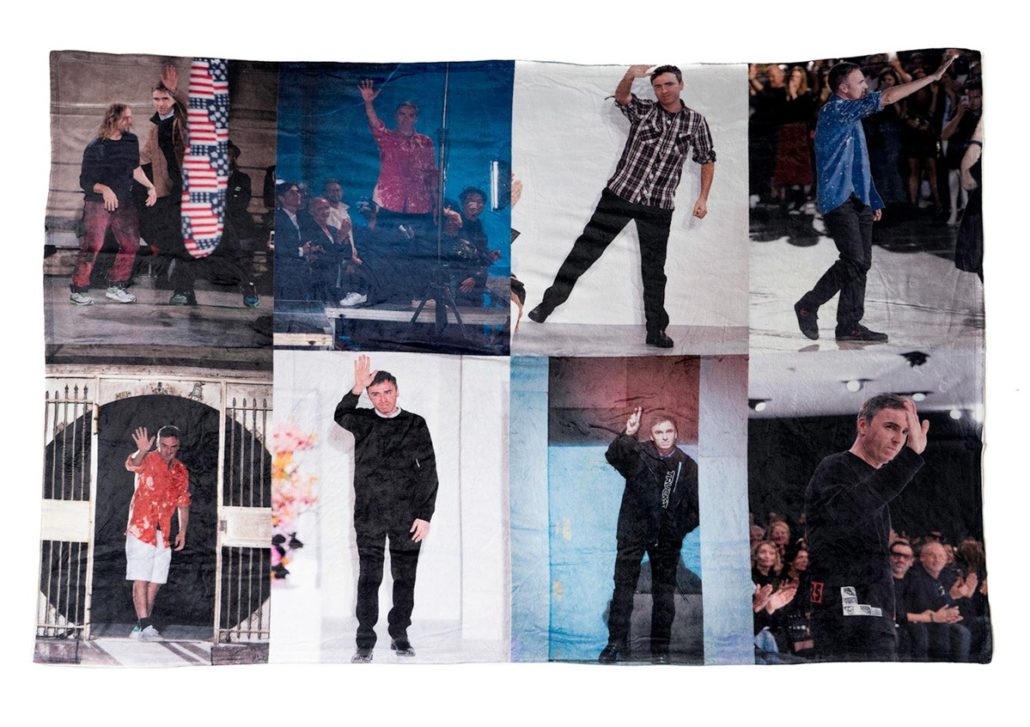