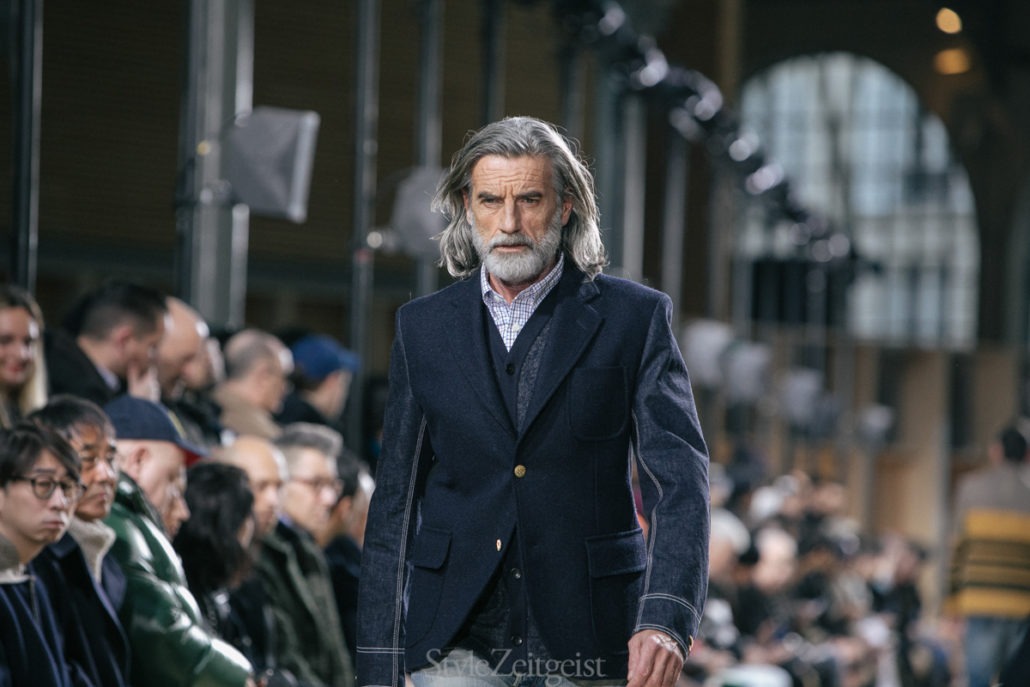 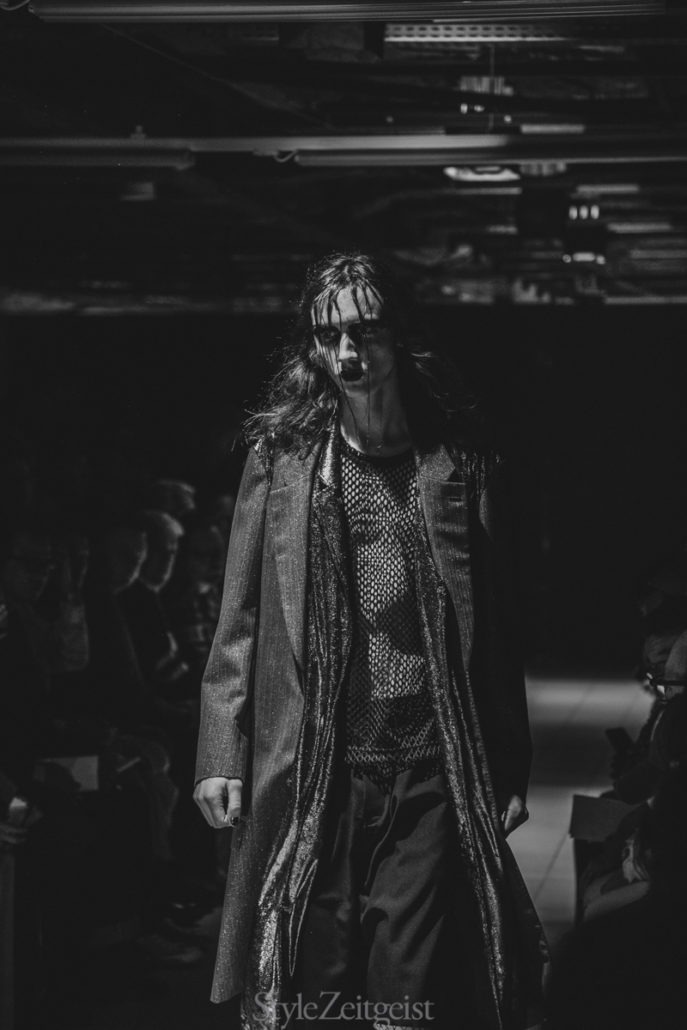 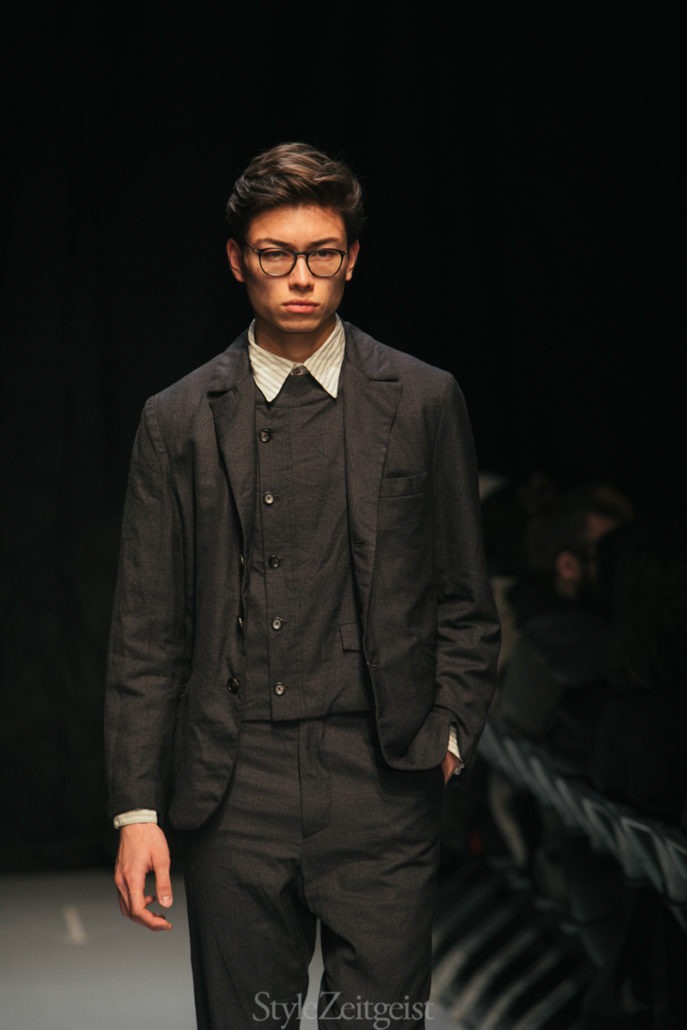 Paris, France – As I am writing this, I’ve gotten a chance to read a couple of reviews by the few critics I respect, and I am finding myself in an unusual position of an optimist. Both Guy Trebay in the New York Times and Angelo Flaccavento in the Business of Fashion lamented the sterility and predominance of corporate fashion during this season, with conglomerates, in cahoots with celebrities and influencers, dictating to the fashion sheep what they should be buying. While I wholeheartedly agree, as I said yesterday, I did not find myself overwhelmed by this feeling. I think I know why – I simply don’t go to any of the shows from LVMH and Kering brands. They don’t like me and I don’t like them, and I am happy with the arrangement. I look at the pictures and I am rarely surprised – you know that they will serve up palatable, consumable, boring stuff with logos in lieu of design. The shows I choose to go to are those of independent designers, and thus my ratio of good to bad shows is probably higher than that of critics from major publications. What I find sadder is that critics like Trebay and Flaccavento are too few and too far between. Flaccavento expressed a wish to give up reviewing shows altogether, and I don’t blame him (thankfully, he’s too passionate of a writer to do so.)  But back to the shows.

It was Friday morning and the question not asked but answered was this – what do hipsters wear when they age? Junya Watanabe. “Silver Swagger” was the name of the collection, and Watanabe sent down the runway models aged fifty and up to the soundtrack that ranged from funk to Tom Waits’s “Black Rider” to Iggy Pop’s “The Passenger.” It was a hoot, and the already familiar signature of Watanabe’s slicing and splicing suddenly looked fresh. Somehow the combinations – a wool coat with leather biker sleeves, black wool pants with denim appliqué pockets, and, my favorite, a long tweed coat with black canvas inserts – looked just right. I am also thankful for Watanabe knowing that at 10 a.m. the audience needs energy to wake up, and he does the job just right (Yohji, take note).

From Junya, it was on to Ann Demeulemeester, where Sebastian Meunier delivered a capable collection that was far better than those of his last two seasons. His man is still decidedly feminine, much more so than that of Demeulemeester herself, but he mercifully toned it down on the Seinfeld pirate shirts and exposed nipples. Maybe because it was a Fall/Winter show, the clothes felt like they had more substance. Finally there were welcome touches of asymmetry, though I could’ve done without the peach silk robes – leave that to Haider Ackermann. The inspiration for the show was once removed – Meunier envisioned what inspired the Antwerp Six when they were young – and the answer was a delightfully screaming Siouxsie Sioux.

At Comme des Garçons that night Rei Kawakubo continued torturing her audience, but this time the pain was sweet. As we got crammed into yet another inexplicably small, cavernous space (Haussmannian Paris never looks as wonderful as when you exit a CdG show, trust me), we were treated to a massage by a bass guitarist from the Los Angeles goth band Vowws, while the rest of the band looked on. After twenty minutes of this, the first chord suddenly kicked in and jolted the entire audience to attention. Kawakubo sent out a gloriously gothic collection, which was still based on tailoring, and thank lord this time they were clothes for adults. The idea was neat – this time Kawakubo elongated everything, so a blazer became a long blazer that at a first glance looked like a coat, but revealed its distortion upon more careful examination. The pockets were placed low, the lapels were overly long, and so on. It was as if someone took the middle of your computer screen and distorted it. It was good.

My Saturday was full of adventures in the over-policed center of Paris. I got blocked by the machine-gun brandishing police twice and missed the Sacai show (I suppose it does not help that I look like a protester most of the time). And so while I don’t review shows I have not seen in person, I’ll just make a note that from the photos it looked more toned down than I have come to expect from Chitose Abe, which was a bit of a letdown. The red pieces – the men’s coat and the women’s biker/puffer hybrid were a standout for me.

I was nice and early to Thom Browne, since I had nothing else to do. I walked into the Palais des Beaux Arts and saw the catwalk and all the seats covered in bubble wrap. The first few looks were also bubble wrap over Browne’s tailoring. Was it a sly comment on the overly sensitive millennials? Perhaps. The rest of the show was twelve repeating sets of three looks – the first was a men’s outfit – more or less, the second one the same outfit reworked into a dress, often with a trompe l’oeil effect, and the third some kind of a deconstructed hybrid of the two. As a spectacle it was neat, as fashion not so much. Perhaps enough with putting men into dresses? It was fun and subversive the first time, Ok the second time, annoying by now.

My last show was that of Geoffrey B. Small. It’s always such a change to go to Small’s off-schedule show where a hundred or so acolytes gather together. No one is there dressed up to have their “street style” picture taken, no one is there to promote their own personal brand and incessantly check their Instagram account, not even pretending to look at the runway, no one is there to ogle at each other and feel exclusive and self-conscious, no PR people to boss the crowd around and air kiss important people. Small continued his experiments with setting shows to theatrical pieces instead of a soundtrack. This time it was a scene from Brothers Karamazov, performed entirely in Russian. The models walked amongst the audience while the actors threw emotional outbursts at one another, but somehow it all cohered. The clothes were wonderful – Small’s luxurious soft tailoring was complemented by robe-like coats and more casual pieces and there were the always welcome touches of jewel tones of the silk shirts that worked with the black and gray wool and cashmere.

And that’s about the gist of it. At the showrooms of GUIDI, m.a.+, Forme d’Expression, and Cedric Jacquemyn I have found more great clothes, so don’t sleep on those labels if you have a stockist nearby. M.a.+ offered a lot of new styles, including their take on nylon puffer coats, which of course looks nothing like what you’d normally envision, as well as several double-breasted coats, which I don’t recall them doing before. Meanwhile, Jacquemyn and Koeun Park at Forme doubled down on what they do best – exquisite modern tailoring that’s unique to them, rendered in exquisite fabrics. It was delightful to see such beauty amidst the sea of premium mediocrity we are drowning in today.