“It is only shallow people who do not judge by appearances. The true mystery of the world is the visible, not the invisible.” – Oscar Wilde, The Picture of Dorian Gray 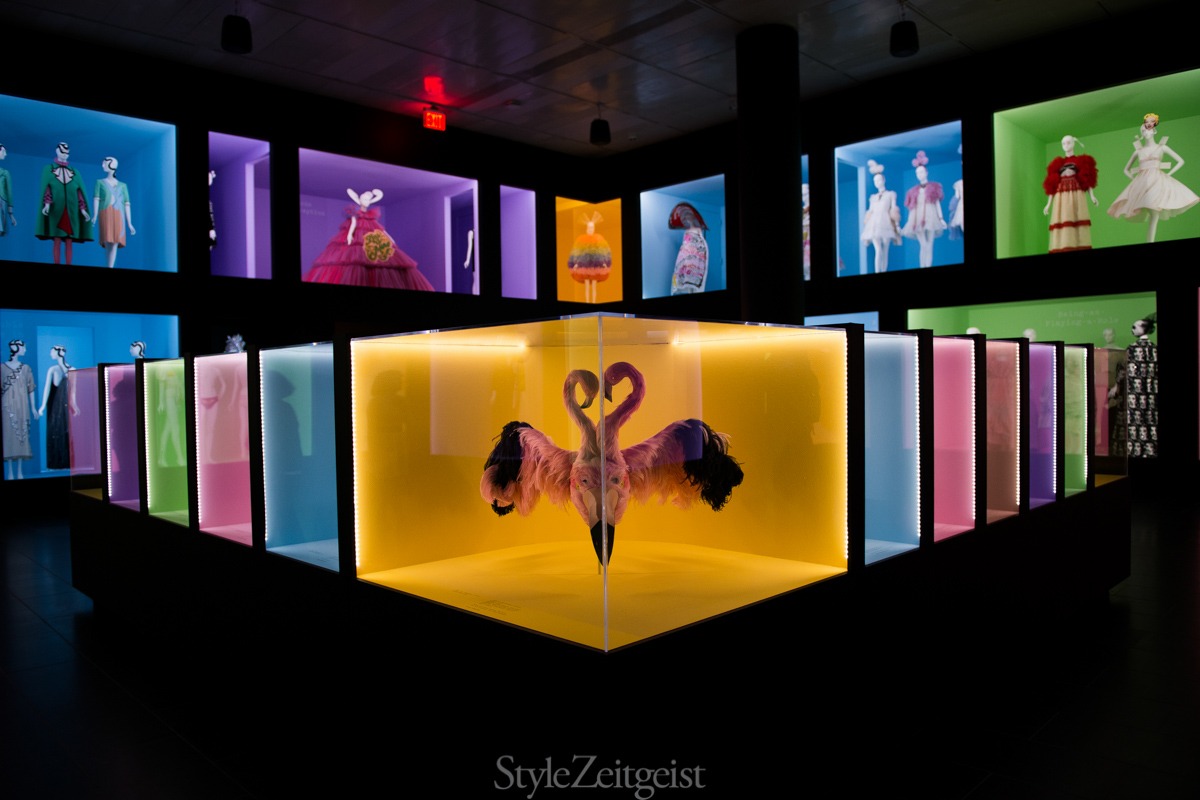 Nevertheless, the Costume Institute’s curator Andrew Bolton and his team has made a valiant effort to put on an educational and informative exhibit. One of the problems, of course, is that the Met Museum is a serious institution – and one cannot shake off that feeling even with the intent behind Camp: Notes on Fashion. Therefore, the exhibit itself feels like a piece of what Susan Sontag, the intellectual godmother of Camp, described as “naive” camp – a seriousness that fails. On the baseline level the exhibit fails because the heaviness of the Met as an institution, with its didactic and solemn nature, weighs it down. It fails because its contents have serious gaps in the Camp sensibility in fashion (and culture, but more on that below) – there is an especial lack of fashion from the ‘80s – arguably the golden era of camp fashion. And chances are it will fail in getting the masses to understand what Camp is (see the paragraph above).

This does not mean that you shouldn’t see the exhibit, which is actually very good at describing different facets of Camp and its origins. It’s also a way to take the temperature of your own Camp sensibility. As far as that goes, some pronouncements from the Met officials surrounding the exhibit have been eyebrow-raising – even though Sontag expressly stated that Camp is apolitical, Bolton has repeatedly tried to bring politics into his comments about the exhibit. Max Hollein, the new director of the Met, went one further by calling Anna Wintour a “camp idol” during his remarks at yesterday’s press preview. I beg to differ, and judging by her expression as she was leaving the room, so did the Ice Queen. 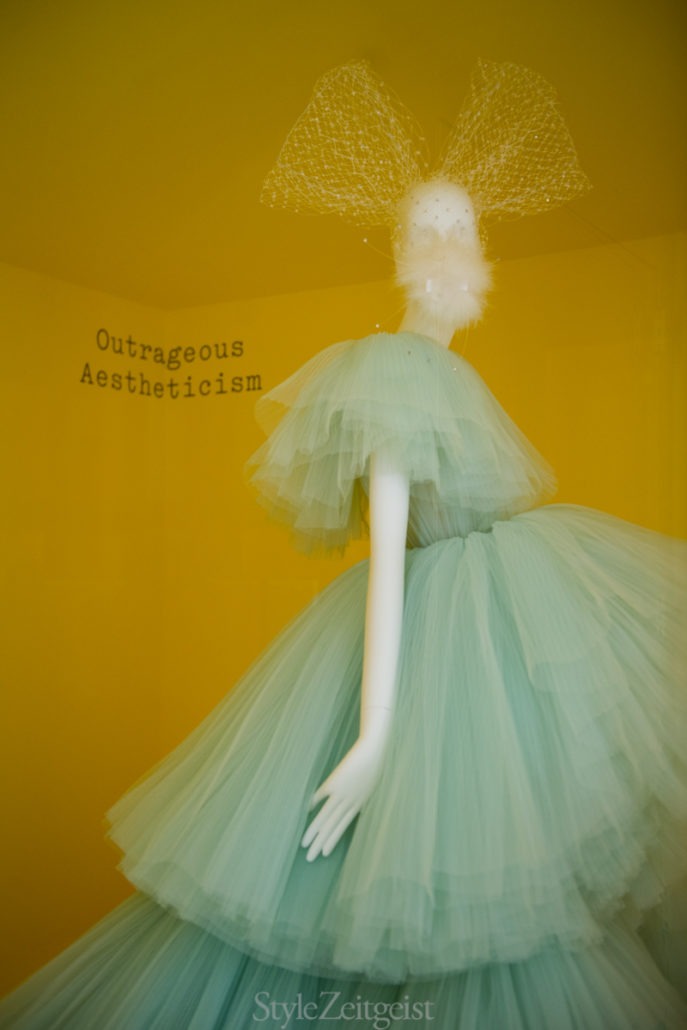 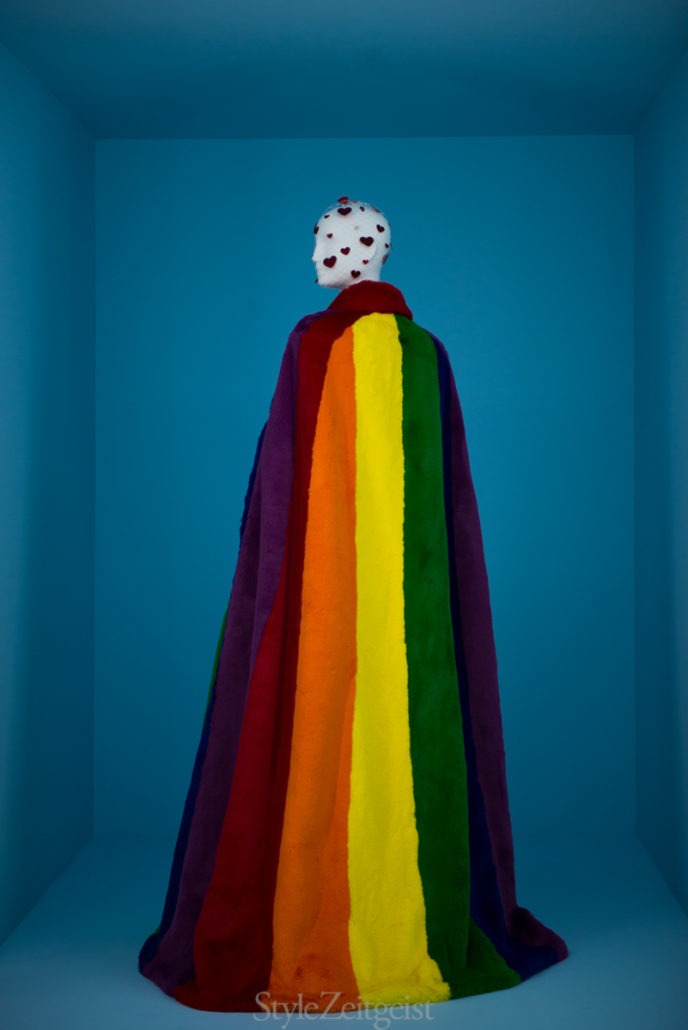 Well, onto the nuts and bolts of the exhibit, which is pretty and seizure-inducing in pink. The show begins with a series of labyrinthine, narrow rooms – a questionable choice for one of the most visited museums in the world. Even during the press preview the attendees kept bumping into one another trying to get a closer look at the artifacts – how the museum-going crowds will fare in there is not a pleasant thought. As far as the artifacts, that first part of the exhibit gives a good primer into the gay history of camp, with artwork and inscriptions and some costumes. And it is commendable that the Met gives the gay the full credit they deserve in shaping the Camp sensibility. I was particularly enamored with a room entirely devoted to Oscar Wilde, one of the original Camp icons, whose life was immersed in tragedy and suffering, despite the seemingly light image the cultural mythology of the West has bestowed on him. There is a picture of Wilde and his capricious, evil lover, Lord Alfred Douglas, under which sits the manuscript of De Profundis, the tortured cri de coeur of a letter Wilde wrote to Douglas while serving a prison sentence for gross indecency. None of this is even remotely Camp, by the way.

As the exhibit turns a corner, so to speak, one gets to see more clothes. First, you go through a short pink tunnel where pairs of similar outfits – one viewed by the curators as “naive” Camp and another one as “deliberate” Camp, as per Sontag – sit behind circular windows. I found these juxtapositions neat, and I wondered about the amount of research it took to put this together. Finally, you enter a large square hall where the bulk of the clothes sit on two levels. This is a problem, because you have to strain to examine the clothes on the upper level – they are just too high up. And that’s a mistake the Costume Institute keeps repeating, though I suspect it’s because the Met constrains the space it devotes to fashion exhibits, which would be a shame. In any case, this makes for an especially poor presentation here, because on the bottom level there are descriptions of different facets of the Camp sensibility to match the clothes; you would have to read the inscription, look at the clothes in front of you, then take more than several steps back to get a look at the second level, and repeat the entire procedure many times over if you want to get the full sense of what you are looking at. Again, how the crowds will deal with this, I don’t know.

What you will see is a lot of Moschino by Jeremy Scott, some Walter Van Beirendonck (who once told me in an interview that his work has nothing to do with Camp and that he is entirely serious), Vivienne Westwood, Gucci, Chanel, Gaultier, Versace, one Comme des Garcons number and that Bjork swan dress by Marjan Pejoski. What you won’t see – some of the most iconic pieces by Mugler, Montana, and Gaultier. That the Mugler motorcycle corset that was featured in George Michael’s video for “Too Funky” was not included in the exhibit is criminal. As a matter of fact, the absence of the connection between Camp fashion and popular culture is an enormous oversight on the part of the exhibit’s organizers. Perhaps again it’s the result of the seriousness that in this case the Met Museum should have chucked out the window. 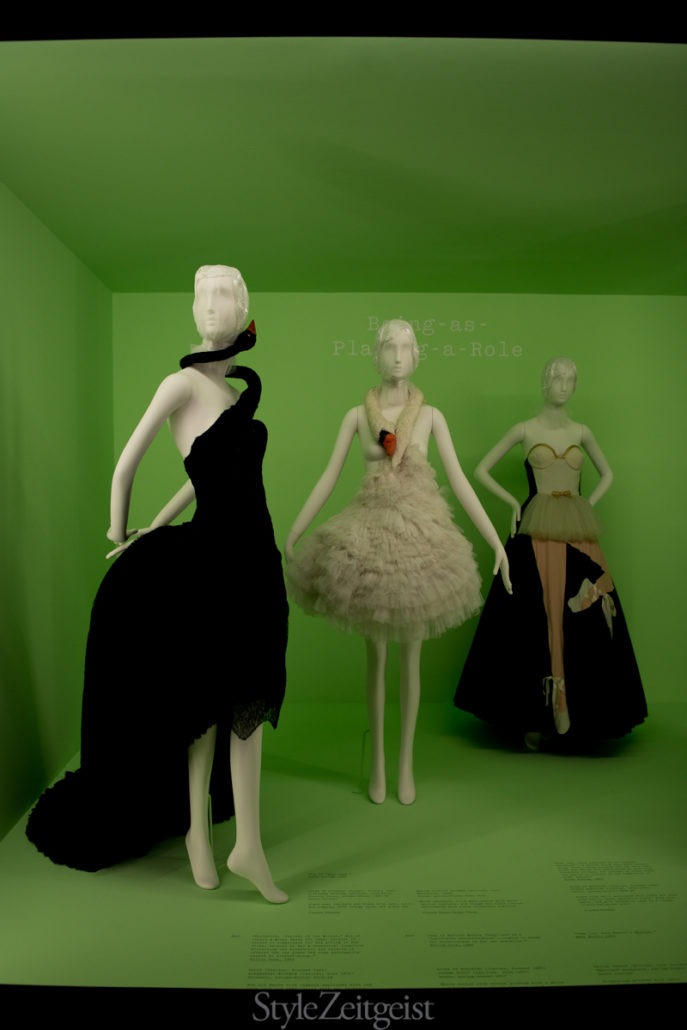 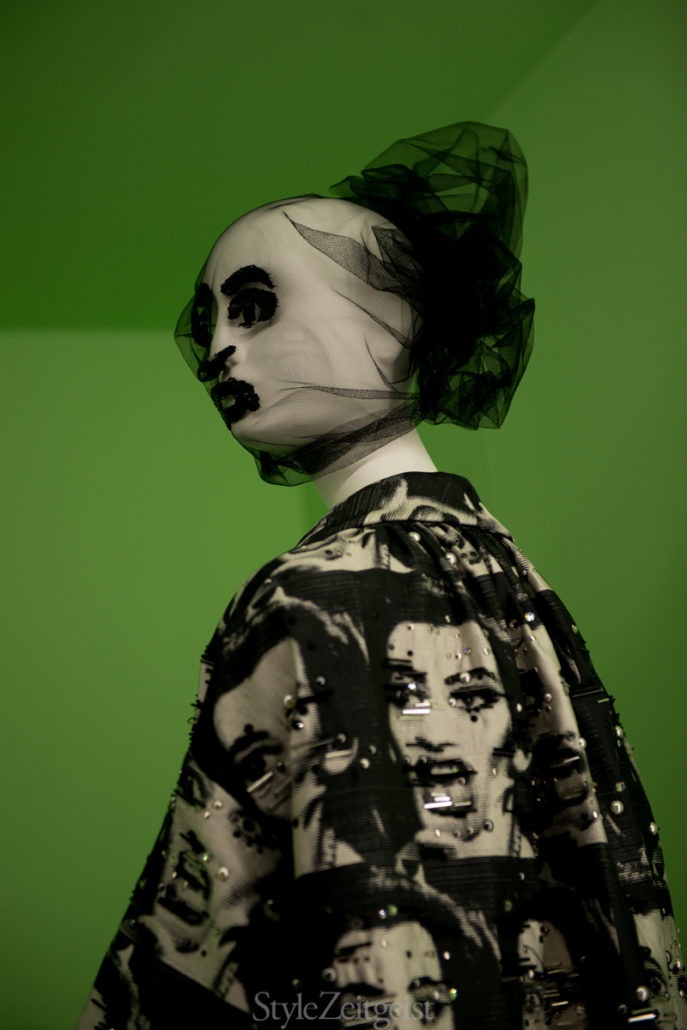 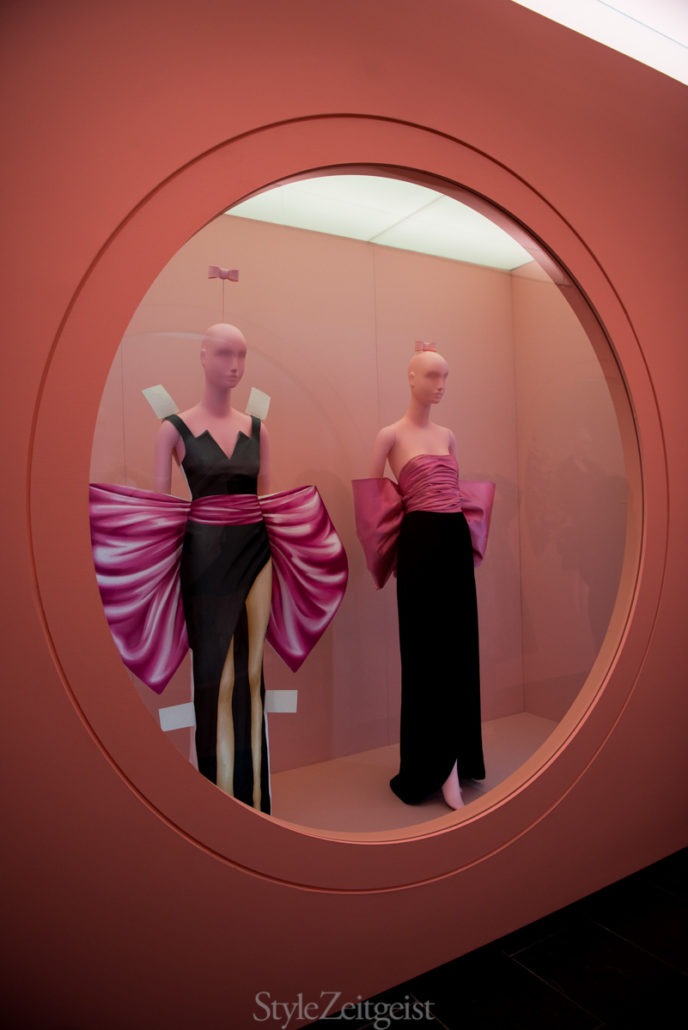 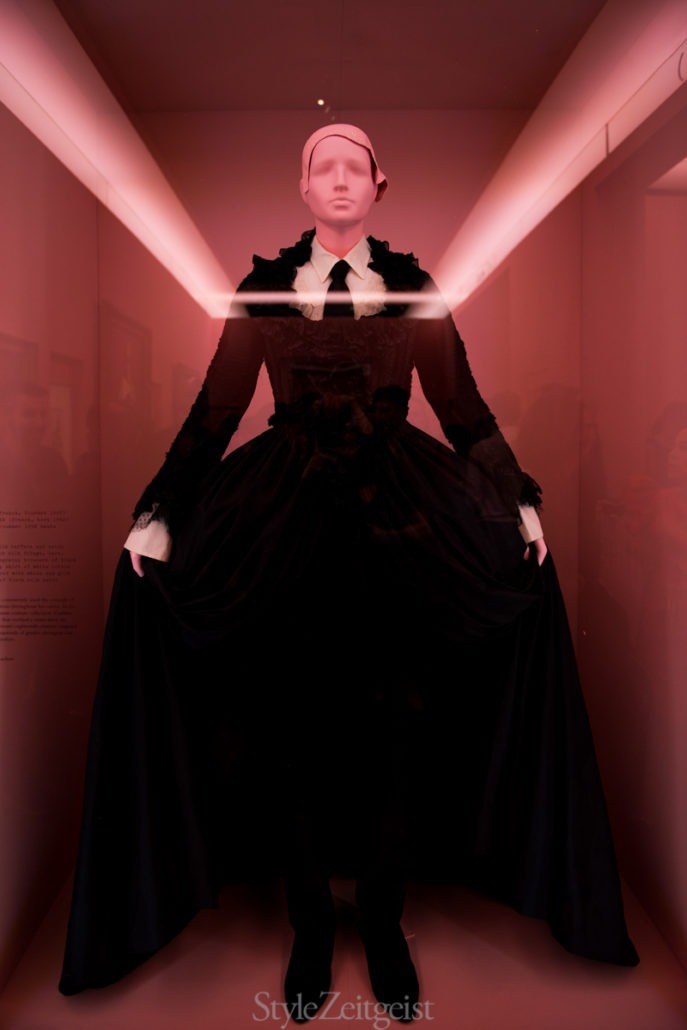 All photography by Yana Bardadim and may not be reproduced without expressed permission.