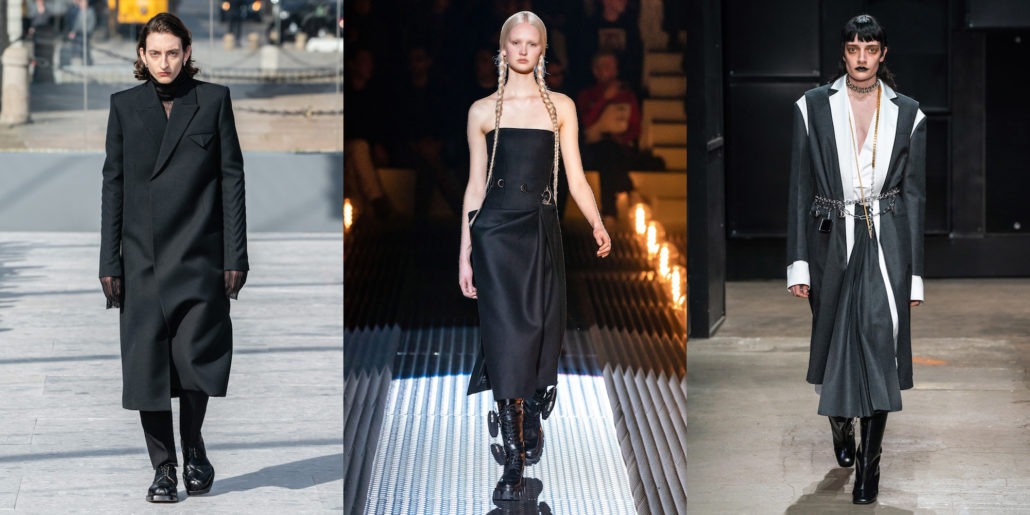 During this past fashion show season one of the most talked about collections was the runway debut of Bottega Veneta under its new creative director, Daniel Lee. Formerly of Celine, Lee brought a certain Celineness to the collection in its rigorous tailoring. But more striking was its dark, hard edge, a decidedly obvious departure from the brand’s staid bourgeois luxury. At Prada, the inspiration was a fictional Frankenstein’s bride, with models sporting black lace, combat boots and Wednesday Addams tails. Even Marni, the effervescent, silly Marni went full on goth with black lipstick and chains. At the Comme des Garcons show in Paris, Rei Kawakubo put on a goth-tinged show whose theme was “The Gathering of Shadows.” The appropriately solemn music was done by the Instagram-famous DJ Parma Ham, whose most defining feature is his mega-mohawk. There is no denying that goth culture is having another moment in fashion. Why?

Every time fashion turns dark it begets plenty of pontificating on the part of the fashion journalists about it reflecting the darkness of the current events. There could be a degree of truth to this, but perhaps there is something simpler at work. Goth culture is one of the few musical subcultures with very clearly defined, recognized and therefore easily copied aesthetic codes – black leather, black lace, combat boots, S&M accessories, often mixed with religious symbols. Put that together with black makeup (for girls and boys) and unconventional hairstyles, and you’ve got a recipe. Perhaps in its chasing of inspiration fashion turns to goth subculture every handful of years simply because designers run out of things to reference. For many designers whose design methods are not tethered to specific cultural roots inspiration is a kind of a color wheel. You keep turning it and another theme comes up, until you have turned the wheel full circle, and start all over again. The last time I noticed this was in 2013, when even the tacky Roberto Cavalli got in on the game.

Goth music was born as an offshoot of the post-punk music scene in England. While punk was political, post-punk turned inward and gradually dark. The music was there before the style. “Bella Lugosi’s Dead” by Bauhaus is widely considered to be the first goth hit, but it wasn’t until The Sisters of Mercy arrived on the scene in 1980, goth truly came into its own. Its aesthetic codes were slowly shaped by acts like The Sisters, Siouxsie & the Banshees, and Alien Sex Fiend and by kids who frequented Batcave, the first goth club in London. You can see the continuation of the punk style in goths’ use of bondage gear and Doc Martens, but they combined it with Victorian mourning dress and heavy makeup. There was less anger and more elegance, less masculinity and more androgyny. Or as Sexbeat sang in a song that epitomized the goth style, “Some wear leather, some wear lace.” Andi Harriman, the author of the book by the same name, described to me the relationship between the music and the style thus, “Since goth style was born out of the punk movement, the idea of DIY was important. It originally consisted of a bricolage of thrift store finds (dyed black of course), one-of-a-kind items found at shops, handmade items, fetishistic elements such as latex, buckles, fishnet, and chains, as well as found objects like chicken bones and toy parts. Most of all, it was about individuality. Fashion was incredibly close to the music since that’s what the goth subculture was based upon – the goth visual aesthetic only enhanced the music’s funereal and experimental sound.”

It wasn’t long before the fashion world caught on to the largely DIY goth style, partly because goth became more mainstream and partly because its aesthetic components were easy to co-opt. Already in the ‘80s Mugler and Gaultier appropriated the look. Then came designers with conviction – Ann Demeulemeester, Alexander McQueen, Rick Owens. Demeulemeester incorporated goth elements because it was a close cousin of punk. Rick Owens was a young goth himself, and it was easy for him to translate goth dress codes into his brutalist vision. “When I see young goths in the street, I feel like they’re my children,” Owens said in an interview with Valerie Steele, for her book Gothic: Dark Glamour, which accompanied the eponymous 2008 museum exhibit she curated. McQueen, in turn, took goth style and made it larger than life by expanding on its themes of romanticism and death.

But for the most part, goth style in fashion continues to represent a kind of a tourism. Because we live in a thoroughly postmodern cultural world where referencing is no longer frowned upon, but is actually welcomed, goth culture is condemned to be continuously mined. “At this point, goth has been so bastardized, we have to just accept it; otherwise we would be angry all the time. Publications often call anyone who wears a black dress, or has blood red lipstick, or who dons cat eye makeup as goth. There’s no way around it,” said Harriman.

The goth look is edgy, dark, and romantic – all of these things have continuous allure because many people tend to be drawn to exoticism, to the unfamiliar “other.” The look is also easy to decouple from the culture itself and its values – something that postmodernism is adept at. Fashion is great at this kind of cultural appropriation, and goth culture presents an easy target. Its style can be broken down into components and be used as a kind of an aesthetic paint-by-numbers kit. In turn this allows designers to dip their toes into goth style without really committing to it – add a cross dangling from a chain here, a choker there, throw in a pair of black patent leather boots, and you are done. You can mix these things with far less edgy garments so as not to scare off your customer base, who are unlikely to bedeck themselves in full goth regalia. Which is exactly what Bottega Veneta, Prada and Marni did in Milan.

This article was originally published in Them magazine