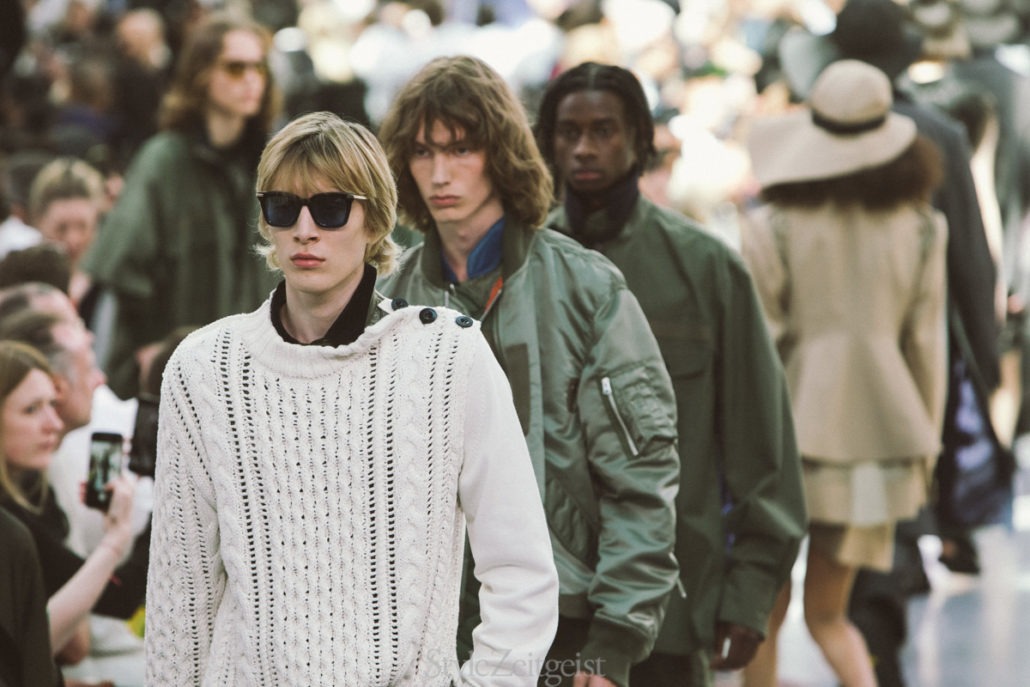 Nothing in fashion is constant, but knowing that Chitose Abe at Sacai will present a great collection comes pretty close. So it was this time, regardless of the fact that the collection came from the most unlikeliest of inspirations, The Dude from the film “Big Lebowski.” The line “that rug really tied the room together” was taken as the motto for the collection that took Abe’s signature hybridization approach into a new direction of tying two familiar pieces into a new garment. Wait, that does sound familiar! That’s what Abe has been doing from the start, but the fact that one never gets tired of it, because the same idea continuously takes new shapes, bespeaks her formidable talent. There was a lot of play on proportion this time – a small sized denim jacket or an MA-1 joined together with an oversized one, creating a new type of garment. Different jackets and coats were fused together or joined with belts. On the other side of the collection, Abe worked with two-dimensional patterns that come to life on the body. There was a bit less ornamentation this time, which really allowed us to concentrate on the shapes of the garments and the overall silhouette.

The Sacai show also served as the preview for the new Nike sneakers Abe designed, with the double sole and the double tongue and the double swoosh logo, this time in all black. A word about sneakers, an unusual departure for the critic who has exactly one pair in his closet. Fashion people love sneakers, and at the shows they love sporting the ones from the latest collab. The problem is there are so many fashion people that you quickly get tired of looking at the same shoes on everyone’s feet. Fashion people don’t like that, and quickly move on. And I find it quite sad that even good design becomes victim to the hamster wheel cycle of collabs. Aren’t these the same people who supposedly care about sustainability? (See part 1)

At Thom Browne later that day I had quite the opposite reaction to that at Sacai. Here was another designer who has built his own aesthetic language. And though I will never get tired of Browne’s masterful sartoria, his themes are starting to look stagnant. Again we saw male models tortured by essentially 19th century women’s clothing – corsets and undercarriages – and the kind of high heels that most progressive women have dispensed with by now. The fact that the torture was conducted to a remix of Depeche Mode’s song “My Secret Garden,” didn’t make the show better even for this diehard DM fan. Again there were pastels and nautical elements and American sports references. I think it’s time Browne has found a new theme, and when he will, I am sure it will be brilliant all over again. Oh, yeah, there was also a ballet dancer in a tailored tutu, if that’s your thing. 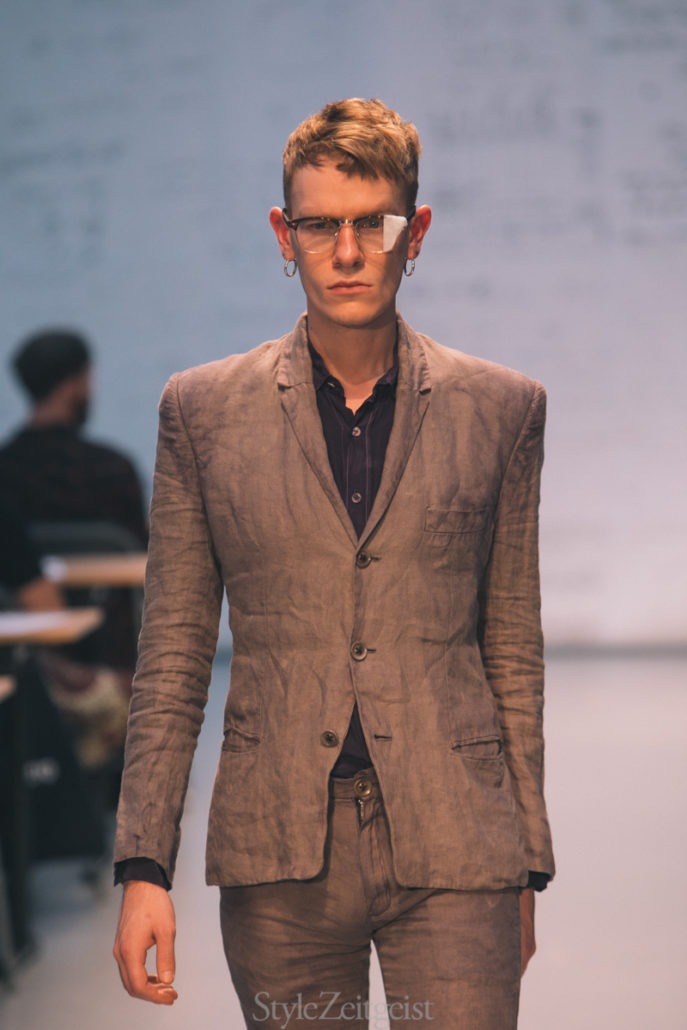 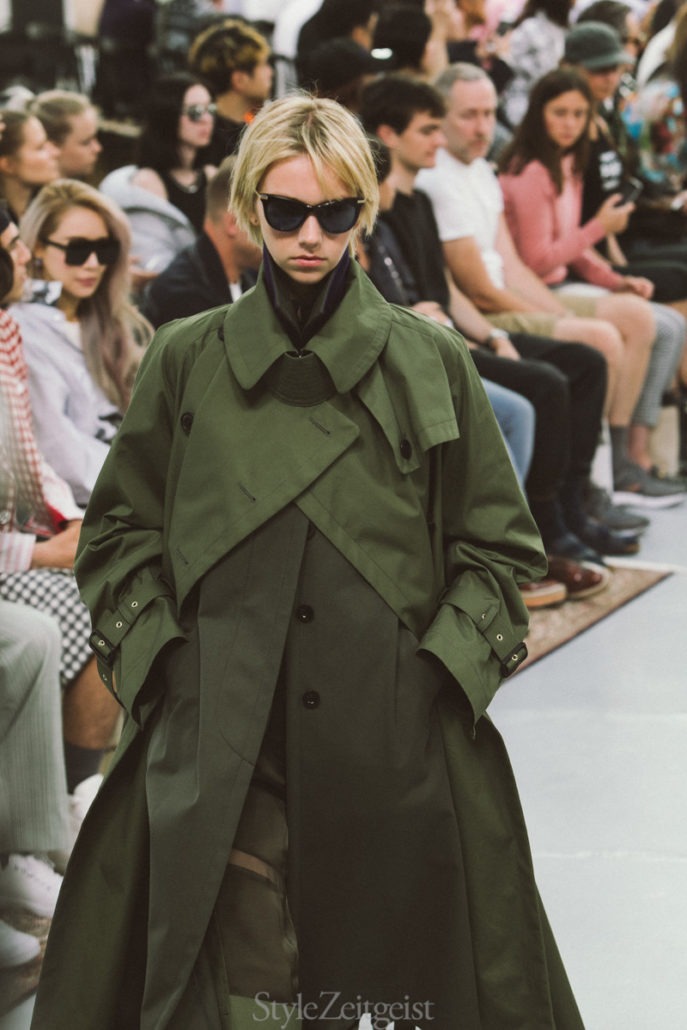 That night Geoffrey B. Small presented an intimate and a heart-felt show that was dedicated to his father, who was a scientist. It was also dedicated to scientists at large, the people who work for the betterment of humanity, even in the anti-science climate that has permeated countries like Small’s native United States. The intellectuals the designer sent down the runway were quietly chic, both modest and secure in the knowledge that they are on the right side of history. If clothes indeed possess semiotic meaning, and I think they do, these signaled that Small, who is trying his utmost to produce the best possible product that will last the wearer for decades, is on the right side of history, too.

My last show was 1079 ALYX SM, a first for me. I’ve been following the brand for a while and despite its standard issue hype origins – non-trained designer, Kanye West and Lady Gaga collaborator – as of late it’s been winning me over. Matthew Williams is not the first to adapt utilitarian wear for the catwalk, but he’s doing it in a convincing way. Look past the lowest common denominator stuff most stores tend to buy, and you’ll see razor sharp silhouette and quality construction in clothing that feels both protective and elegant. So it was with this show. It started on a low note by hewing too close to the Hedi Slimane’s coked-up nymphette territory, but it got going in earnest once Williams sent out look after look of what he does best – tailoring that looked fresh and modern. I particularly loved the translucent trench coats. I also loved the energy at the show, which in addition to the press and the buyers, featured a bunch of well-wishers from celebs to friends and family. It felt young and passionate and a refreshing last show experience of Paris.

Besides shows, I hit up a bunch of showrooms, as is my custom, because it’s one thing to see the clothes on the runway, and another to examine them up close. I can report that you should probably start saving your money for Rick Owens and Undercover in particular. At Rick Owens even the Champion collab elongated sweatshirts that were turned into onesies were badass. And so was the sharp-shouldered, glam rock tailoring. At Undercover there was so much desirable stuff, that it was honestly hard to pick one thing. I admired the Cindy Sherman “prints” that were actually jacquard on wool and denim and appliqués on leather and nylon. There was also great tailoring, as usual, at Forme d’Expression, m.a.+, and Uma Wang. At m.a.+, Maurizio Amadei also presented a capsule made from old Japanese canvas bags, and some great denim. There were great prints at Dries Van Noten, done in collaboration with a Japanese artist. And that’s more or less it. It was a good season overall, one that felt fresh and hopeful for the independents who are now locked in an even tighter battle with the conglomerates who have been actively tightening the screws on the designer fashion market. My only hope is that the independents, who oftentimes produce far better and more genuine work will continue to thrive. Consider this next time you go shopping. 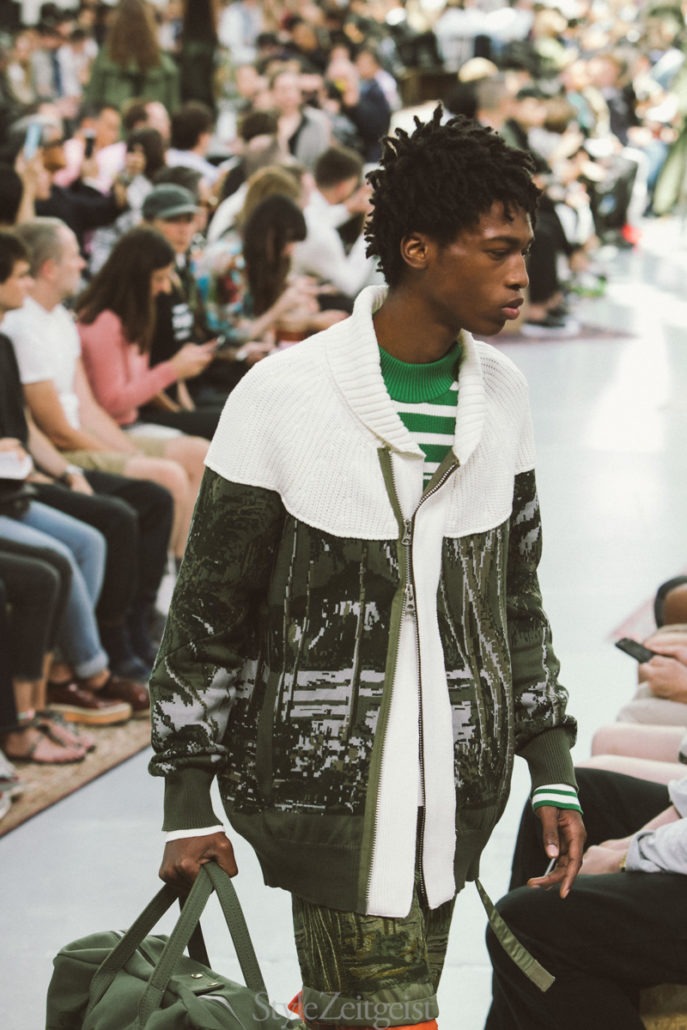 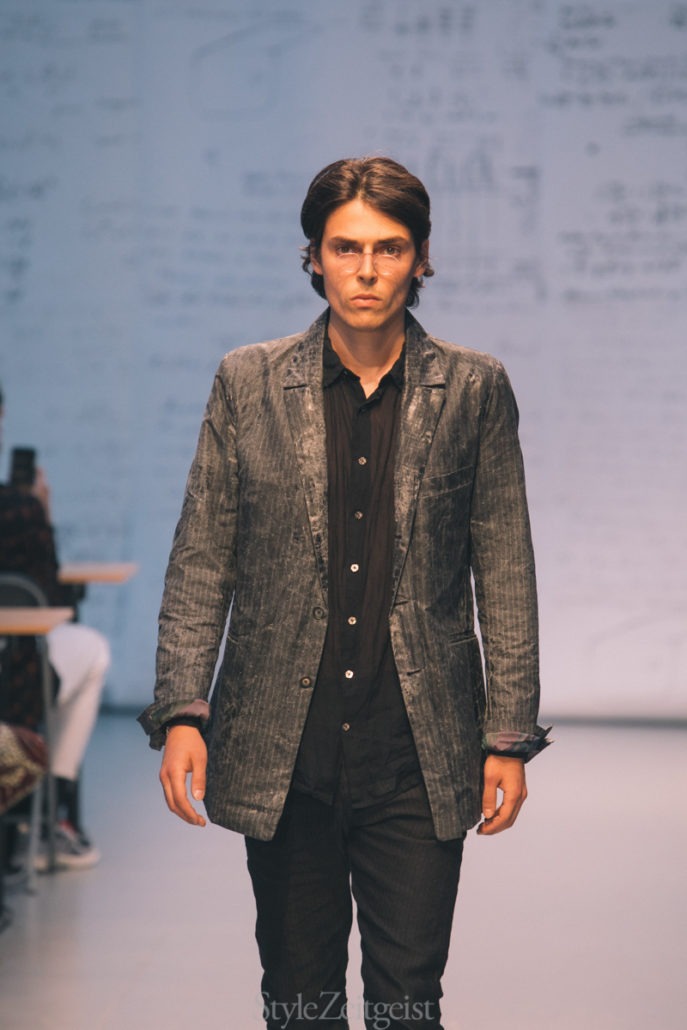