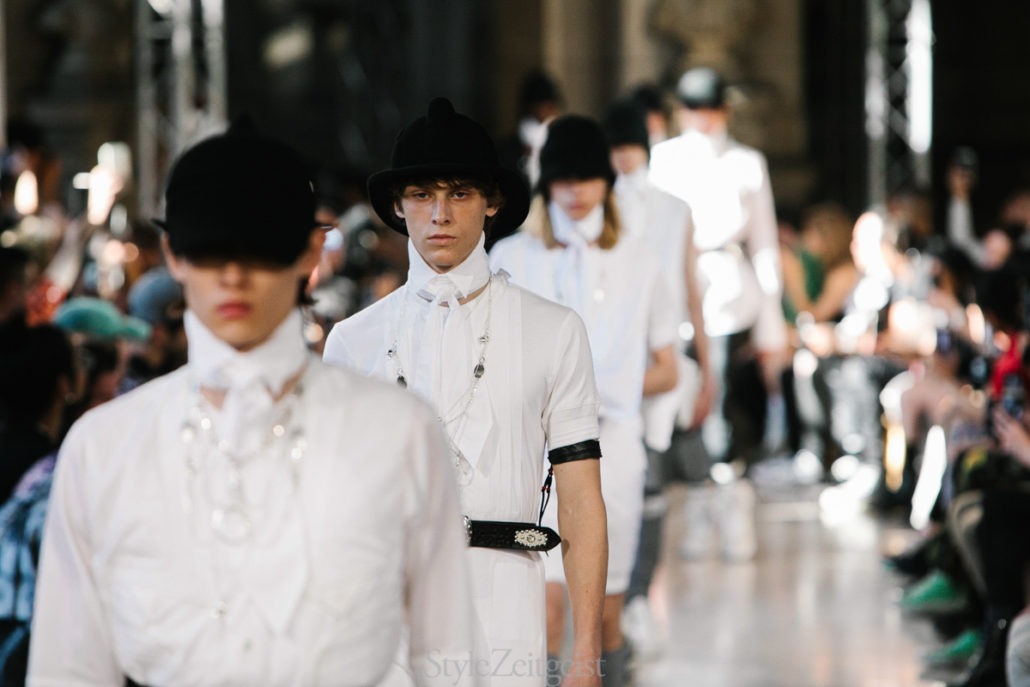 The theme of the first two days in Paris was this – some great designers are sick of what’s going on in menswear these days. By that I mean the invasion of streetwear and mere product at the highest echelons of fashion. Needless to say I wholeheartedly agree. It’s not that I am against streetwear; anything can be done well, and I’ve grown to love and wear brands like Neighborhood myself. But so much of it has been so utterly boring as of late, crowding out design in favor of merch. Do I care if your stupid hoodie has a Balenciaga or a Gucci or a Givenchy logo on it? It’s the same stupid hoodie, and you are lame for wearing it. The more young kids I see looking like sponsored Formula 1 cars, the less I like men’s fashion today. But, of course there are, and there will always be, exceptions, that look that much better juxtaposed against the background of sartorial blandness.

I am forever optimistic about youth – I came to fashion from youth culture and it’s the backbone of everything I do – but these days optimism is getting harder to muster. I don’t want to be the middle-aged guy who admonishes the young and says his generation was better. I don’t want to be someone who shrugs his shoulders every time someone asks him which young designers he likes. But I am not going to lower my standards just because seemingly everyone else has. We live in a culture that is largely insipid and vacuous, and contemporary fashion reflects that. Jun Takahashi of Undercover turns fifty this year, yet he produces work so dynamic and so relevant, that no young designer comes even close. Nitzer Ebb once asked in a song, “Where is the youth?” Perhaps it’s in the middle age.

My first two shows were equivalent of a cri de coeur against the status quo described above. The notes for the first show I attended, TAKAHIROMIYASHITATheSoloist, began thus, “I take a step back and look around – very little resonates or speaks to my heart. In questioning the creative progression of a new generation I acknowledge that I am someone who purely likes clothes and expresses myself through the act of ‘dressing.’” Amen. What do you when you feel like that? Often, you feel nostalgic. Our culture constantly asks us to move on, and in doing so automatically assumes that everything new is good, but why? If moving on does not feel like progress, why shouldn’t one stick to things that have affected them profoundly in their formative years? I could see Miyashita taking this line of thought; his collections are always deeply personal, inward-turning. With this show, he turned yet again to the culture of the ‘80s and the ‘90s, and went even further, to his childhood. Hence, you saw the Mickey Mouse on the back of tailored jackets and shirts, and firemen and policemen hats, the symbols of two professions many boys want to be when they grow up, before they realize that this world is largely held together by duct tape and lies.

Miyashita is the last hippie in fashion – he does what he wants, sometimes with little consideration for pragmatism. It’s a deliberate choice and an enviable one, because so many designers work under creativity-sucking constraints. And it results in clothes that are often found hard to incorporate into a wardrobe, but, boy, are they a sartorial treasure to behold. 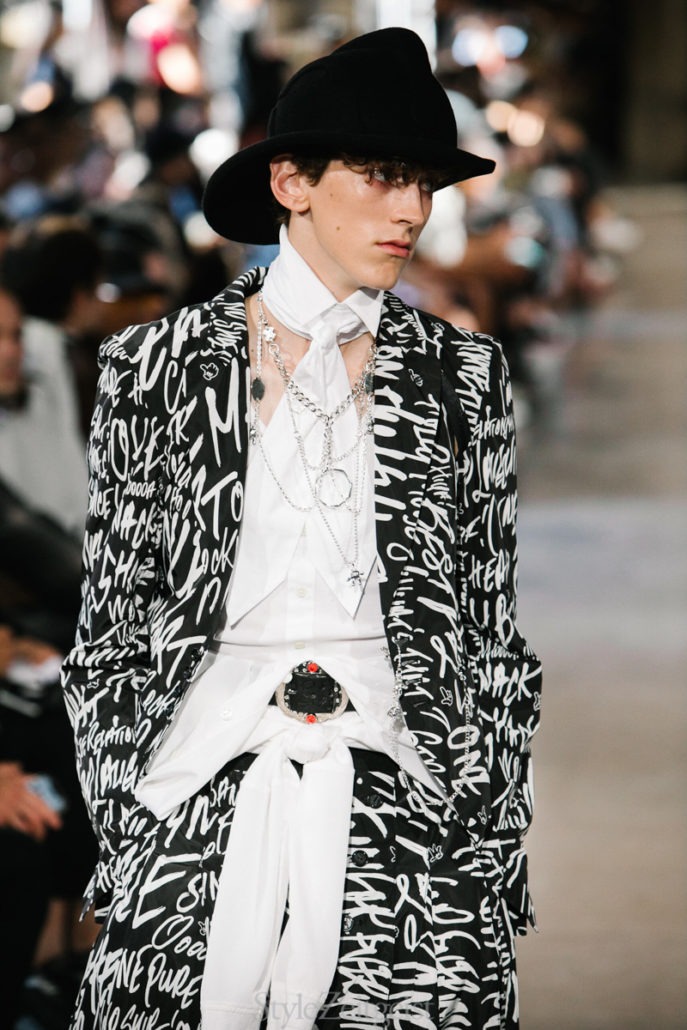 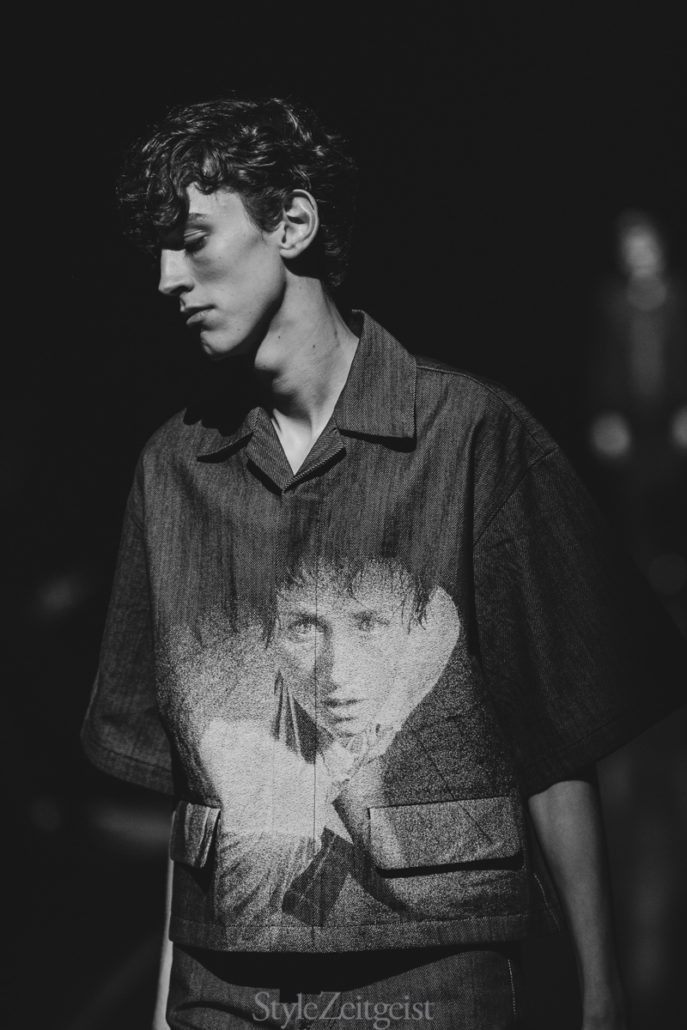 Last week a prominent fashion critic asked me if I considered changing careers. He, too, was sick of the logoed blandness coming at us in all directions. I said no, because there are still great moments in fashion, though fewer and farther between. The Undercover show was one such moment. Its understated beauty was nothing short of sublime. The collection leaned heavy on tailoring, and backstage Takahashi explained that even he was getting tired of streetwear. Mind you, this is coming from the pioneer of mixing streetwear and high fashion, whose moves have been imitated by everyone from Supreme to Kim Jones to Virgil Abloh. The show invite had the following Dylan Thomas line on it, “I hold a beast, an angel, and a madman in me.” The relationship between darkness and light has always been a theme at Undercover, and here darkness won out, but Takahashi stressed that there is serenity in darkness. That’s why he completely dispensed with color for this collection, and the copious Cindy Sherman graphics were done in shades of gray. Memphisto, a Depeche Mode B-Side from Violator, provided the most poignant soundtrack. You bet it was fabulous. Start saving now.

I shared a taxi to the Undercover show with Yang Li, who in his showroom presented both his menswear, his Samizdat, concert merch-inspired, line, and a womenswear capsule based on a photo project he did with the photographer Antoine D’Agata, called “Too Much But Not Enough.” Li has a quiet way about him, telling you the most brilliant things in such an understated tone that you have to ask him twice to make sure you heard him right. How does such a niche designer get a prominent Magnum photographer who wouldn’t be caught dead near fashion to essentially shoot his first campaign, and then make a book out of it? How does he get twenty musicians, including subcultural icons, some of them famously prickly, like Genesis P-Orride of Psychic TV and Michael Gira of Swans, to collaborate not just on clothes but on a record? I don’t know, and I don’t care to know, because I see the brilliance of the result. The menswear collection was called “Yang Li Greatest Hits,” and is full of desirable clothing that reference the music Li loves. Like Raf Simons in the generation before him (for whom Li interned), one of Li’s strengths is combing youth culture references with fine fabrics and tailoring, turning bourgeois sartorial constructs on their head. Here, it was the fishtail parka covered in patches, but made from fine black wool crepe. There was a tailored coat with “Dreamer” rendered in gothic font. And so on. Oh, yeah, did I mention that Li is young? Maybe there is still hope for us left.

Lack of quality youth culture is not the only thing that frustrates me today. The whole issue of sustainability is another one. Let me go on record right now to make my position clear – most of, if not all, sustainability narratives are bullshit. No one making clothes is truly sustainable today. You want to be sustainable? Buy less, pay more, buy quality clothes that last you for years. Here is a novel idea – save up for a garment you like, the way virtually every generation hitherto had. That’s it. It’s a simple recipe that no one wants to talk about because it’s bad for the late capitalist system we have created in the last three decades. Millennials love beating their chest about sustainability, but statistics show that they don’t practice what they preach – according to a recent study cited in Forbes most millennials are not willing to pay a premium for sustainability.

Some of the most sustainable designers agree with my view. At the Boris Bidjan Saberi showroom, I watched with pleasure as the designer went on a rampage about sustainability myths in front of the journalists from WWD and several other outlets. “My job is to make the best clothes possible, so they last for years,” said he. He compared most clothes produced today to junk food. He also took a shot at the public, and at the professionals standing right before him for not knowing what quality is, for not understanding materials and construction methods. I couldn’t agree more. Starting this season Saberi is dispensing with the runway show, a move I welcome. His clothes were always about construction and attention to detail, things that are hard to relay on the runway, and virtually impossible in two-dimensions on a phone screen. He digs deep, not wide. And he has dug deep this time around. Garment for garment, this collection held its own against the best of artisanal fashion produced today. There was an unlined reversible leather jacket with taped seams so light that it could be easily worn in the spring or in a bar. There was a trench made from oxidized fabric that ate away the original black color, except at the seams. There were plenty of garments made with mixed materials. The collection was about clothes interacting with the five senses, and it all begged to be touched and felt. Saberi is adamant about this; unfortunately, he’s fighting an uphill battle. It’s not that easy to sustain a label today that dispenses with the digital world completely and demands the consumer to enter the store. I hope the designer finds the right scale at which he can maintain this level of craft along with a successful business. 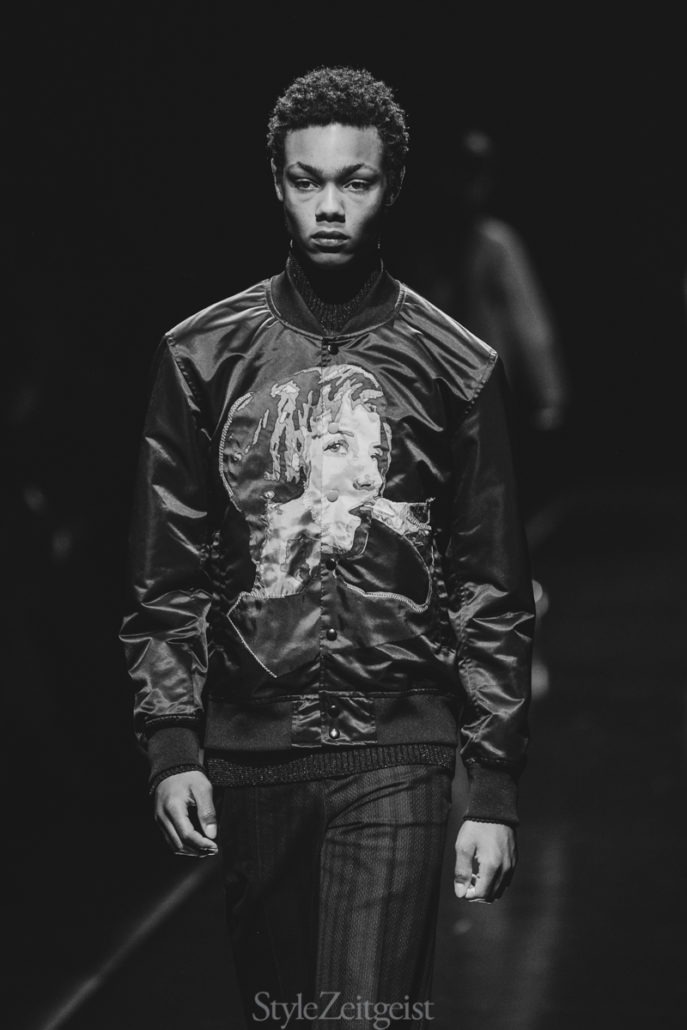 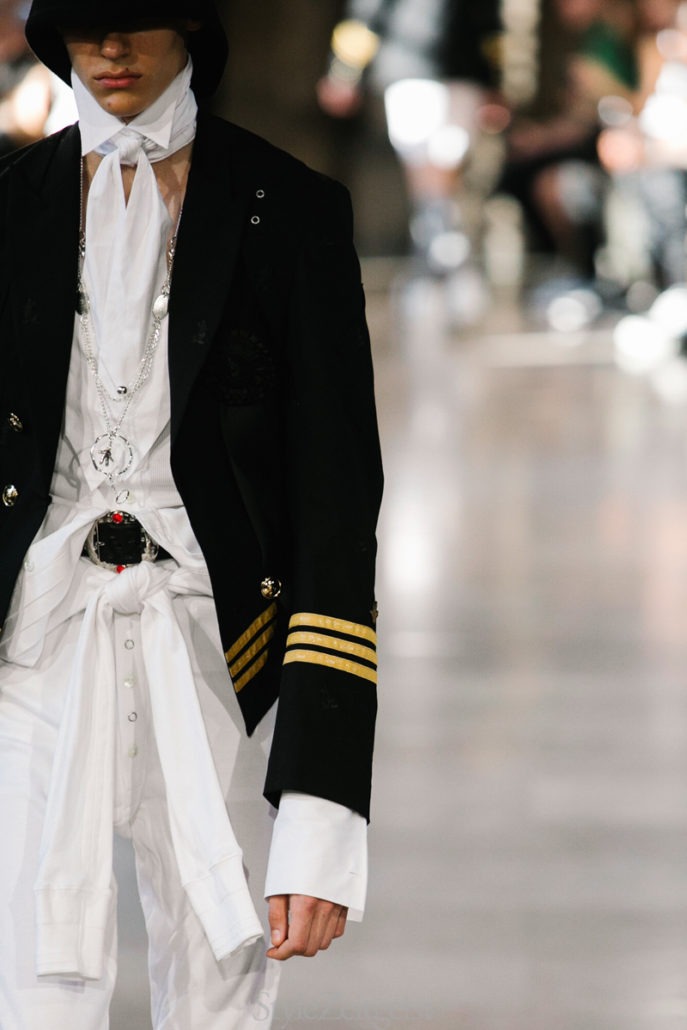