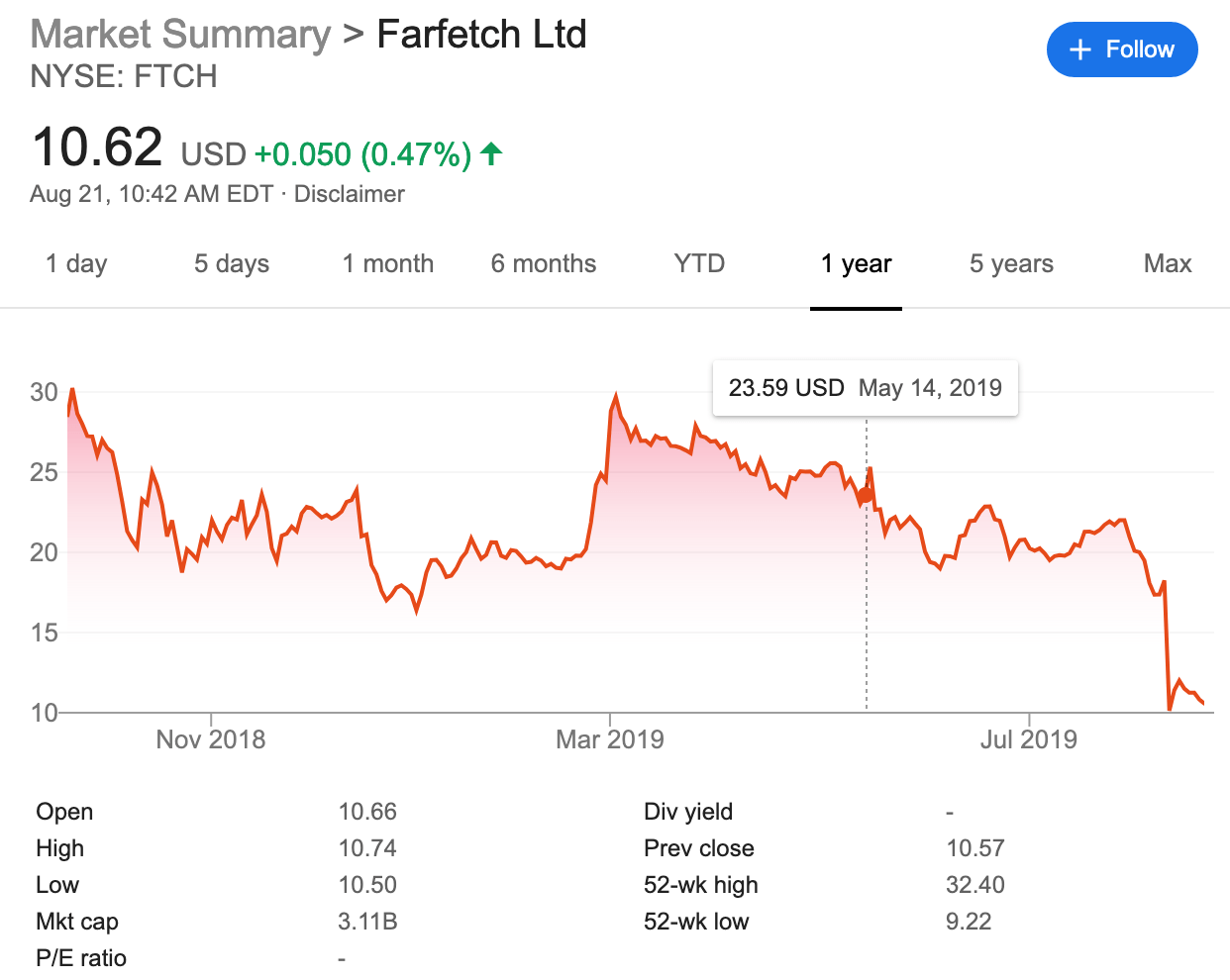 New York, USA – It’s August, the lull before the storm of the fashion month that will start in early September in New York and will end in early October in Paris. The fashion industry is pretty much ground to a halt, with most people on vacation, except those in PR who are starting to gear up for the shows. It’s a good time to take a look around and see how fashion is doing in business terms. It’s a good reality check exercise in the industry where everything is always amazing until you go out of business. But business people are less impressed by a cut of your dress than by your revenues, so it pays to look at the numbers. And yes, I know that you just want to look at pretty pictures on Instagram, but sometimes you have to eat your vegetables, too. I’ve dusted off my finance degree for this and did some looking around, and things are looking decidedly mixed.

First, let’s address the retail side of the business. The elephant in the room here is FarFetch (stock ticker: FTCH), a retail aggregator for designer fashion boutiques, which went public last September, and whose stock is down 70% from its high of $30. This is due to a couple of factors – namely its dismal last quarter results that has widened its loss (the company has not turned a profit since inception) and its acquisition of New Guards, the parent company of Off-White and Palm Angels, for a cool $675 million. The latter seems to tell me that FarFetch is looking for new revenue streams. This often happens when a company is not convinced that its core business will make enough money down the line. It doesn’t mean that it’s all over for FarFetch – online retail is still a fast growing market, but pretty much all analysts have slashed their target prices by half, even those maintaining the stock at “outperform.” The icing on the bitter cake is that The Schall Law Firm, that litigates on behalf of disgruntled shareholders, has started a legal probe into the company’s doings, to see whether FarFetch has misrepresented the company structure and mission at the time of its listing.

Another retail practice that’s all the rage now, according to fashion news, is buying second-hand designer clothes. One of the biggest players here is The Real Real (REAL), another startup that has yet to turn a profit. Regardless, it went public on May 31st of this year at $20, quickly shooting up to almost $29. Today though, its price hovers below $17, a roughly 60% drop from the high. And even though the company reported a 51% revenue growth compared to last year, clearly Wall Street is not impressed.

This is the demand side, but what about the makers of fashion? Here, things are all over the place. Capri Holdings Company (CPRI), the parent company of Michael Kors, Versace, and Jimmy Choo, and incorporated in the British Virgin Island, a notorious tax haven, currently trades at around $28, roughly 65% down from its 52-week high. The company has performed badly this year due to declining sales at Michael Kors and Kate Spade. The recently acquired Versace brand is the company’s one remaining bright spot.

Tapestry (TPR), Capri’s closest American rival, is the parent company of mass-luxury brands Coach and Kate Spade. It currently trades at around $21, down 60% from its 52-week high of $52.5. It took a beating on August 15th, after announcing its latest financial results that saw its profits plunge nearly 30%. It now trades at the P/E of 9.76, nearly one point below Capri’s 10.56. The Price to Equity ratio is a key metric that tells you about the optimism of investors since the current stock price should in theory take into account future earnings expectations. The numbers here are pretty low – clearly investors are not expecting to be impressed by a surge in earnings in either of the companies.

Over in Europe things are looking better, as LVMH and Kering continue to dominate the luxury fashion market. LVMH (LVMUY), the owner of Louis Vuitton, Dior, and many other luxury brands, is doing especially well, buoyed by the insatiable appetite of luxury consumption in China. Its latest quarterly revenue number was over 12.5 billion Euros. It’s sitting pretty at EUR 370, slightly off its annual high of EUR 392.65, with a P/E ratio of 28, nearly three times as high as Capri or Tapestry.

Things are less rosy at Kering (KER), LVMH’s closest rival, and the parent company of red-hot brands like Gucci, Balenciaga, and Saint-Laurent. Though it seems that the last quarter was not so hot, as demand for Gucci, Kering’s golden calf, has slowed below analyst expectations. Kering’s stock is currently trading at EUR 439, roughly 100 euros down from its annual high. Its P/E ratio, however, remains nearly identical to that of LVMH.

Finally, in London, Burberry (BRBY) has enjoyed quite a year due to rising profits, again driven by sales in China. It’s not entirely clear whether the relatively fresh appointment of Riccardo Tisci, tasked with revitalizing the brand, has contributed to the rising profits. Despite overall lukewarm reception of Tisci’s rebranding and collections, Burberry’s stock has galloped this year from the nearly 16 British Pound low to a 23 GBP high, now settling comfortably at just below 22 GBP, with a healthy P/E ratio of nearly 27, just below that of LVMH and Kering. Burberry’s CEO’s salary went up a neat 112% to 7.4 million GBP this year.

All in all, it seems that the luxury European conglomerates are continuing to tighten their chokehold on the fashion market, as consumer preferences are now largely shaped by Chinese customers, who prefer Louis Vuitton bags to those of Michael Kors. On their part, LVMH and Kering have been rushing to meet aspirational demand, by producing relatively affordable “premium mediocre” items, that allow for en masse buying into the brand. It’s a smart strategy that lets these brands to compete price wise on the turf established by the American mass luxury brands that are now taking a beating in the stock market.