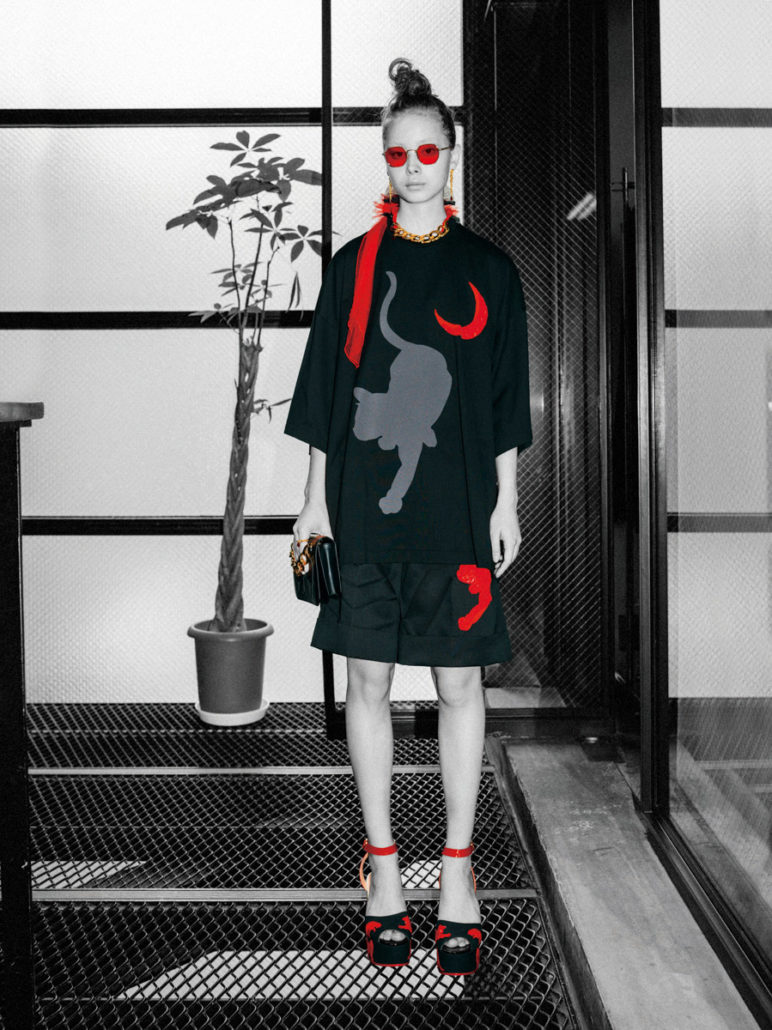 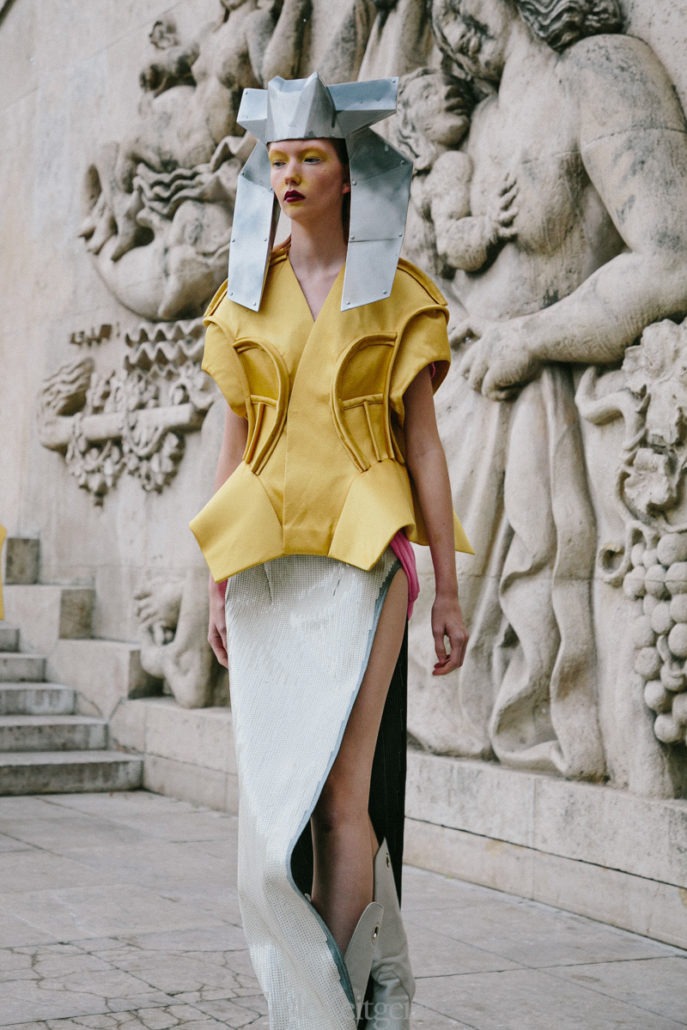 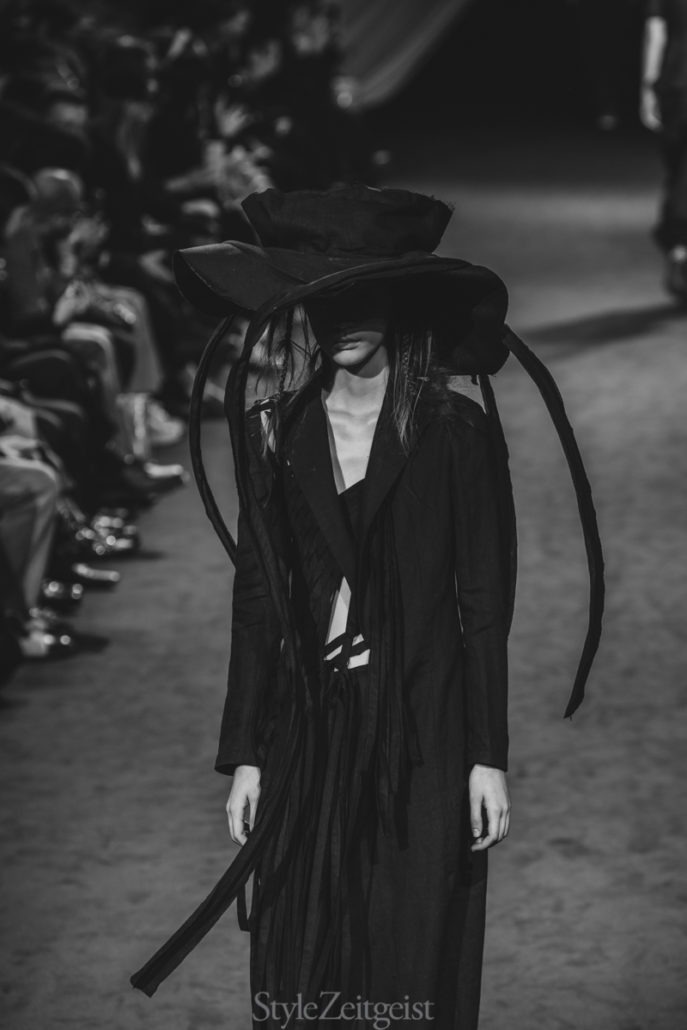 Paris, France – “Dries, now there is a real designer,” sighed my AirBnB landlord, after expressing his frustration about working for a major, and majorly uninspiring Parisian house. Indeed, he is and he proved it yet again with another sublime show. Each seat had a red rose on it with handwritten “DVN” X some other initials, which I only understood were that of Christian Lacroix, the legendary Parisian designer whose label has been defunct for some time and whom Van Noten brought on to collaborate for this collection. This was a “collab” in the Van Noten vein – a sign of mutual respect that did not stink of a money grab like many collaborations do. It was soulful, not cynical. And the clothes were sublime, with faint military influences on some pieces and with couture-like shapes on others that had Lacroix’s signature on them. Of course there were explosions of flowers, color, and couture-like embroidery. When Dries Van Noten brought Lacroix for the final bow it was a fashion moment for sure. This was a longing for an idealized past of the kind I can get behind – bringing out people to refresh our collective fashion amnesia. Which made me think that we are not exactly forgetful – we do remember the greats… when we are reminded of their existence.

After Van Noten I headed straight to the Undercover showroom. One of the reasons Takahashi stopped showing womenswear is that he wanted to concentrate on making clothes that were less theatrical and closer to life. These were imbued with Takahashi’s spirit of cuteness with a dark twist. There were cats galore – kawaii to the hilt, though of course cats have been proven to remain half-wild and you never know when they decide to kill you in your sleep. There was also a denim selection with Cindy Sherman graphics rendered in jacquard, a counterpart to the men’s collection, and a brilliant section with hand-embroidered  motifs based on the macabre art of Edward Gorey.

Paris shows can roughly be classified into three categories – major houses where editors have to go even if they don’t want to, established independents where editors do want to go, and some smaller shows that they skip in order to get a breather from their mad schedule because they can afford not to go. This is understandable (I’m guilty of this, too) but sad, since designers like Uma Wang (not to mention those who can’t afford a show) deserve more attention. Hers was a quietly assured show based on a recent visit to Pompeii, the ancient Roman town that was buried under a volcano. The prints mimicking Roman art Wang found in the Pompeii museum were touching. Other prints were based on the photos of the tile mosaics of the Roman baths that Wang photographed. There was racier stuff she shot in those baths, as Romans had a much more relaxed attitude to sex than the Christians who took over the empire, but ultimately Wang decided against using them. There were also white fabric looks that took on a new life after being subjected to treatment that made them look rustic, almost muddy, in the best way possible. Wang stuck to her loose, airy silhouette, adding even more volume in some cases, and in others letting the fabrics as light as those in pajamas do the talking.

Later that night Rick Owens treated us all to a show in his beloved Palais de Tokyo courtyard. Like its men’s counterpart it was called Tecuatl, after his mother’s maiden name. The Mexican references were loose, but the clothes were anything but. They were sharp, furious, sartorial sculptures that Owens has been unleashing on us in his past few seasons, and that prove that despite doing this for twenty-five years he remains in his best form. The extremism of his clothes was turned up another in-your-face notch – the platform boots got taller, the shoulders higher and wider, the heavy knit skirts became two panels, revealing the models’ hips. The clothes were sexy, but sex wasn’t the point, which made them that much better. The stomping music by Gage only was a perfect match to the show and you had to leave it to Owens to absolutely seriously use bubbles to add another layer of theatrical effect. Backstage I told Owens that he remains the last true modernist, making it new while so much fashion wallows in nostalgia of the most banal sort. And even though he said that his modernism has roots in nostalgia for that of the thirties, Owens shapes it into something uniquely his own. To paraphrase Rimbaud, Owens must be absolutely modern.

At Yohji Yamamoto the following night my feelings were mixed. The show started with a bang of the kind of sartorial marvel that I have come to love from the maestro. There were jackets that started as solid pieces of fabric, but ended up braided towards the end. The matching hats were stunning. This time I did not mind the cutouts that bared far less skin than in his fall show, especially on the looks where they formed a kind of sartorial jagged puzzle. Still, midway from the show my vision started to blur. The slow music and the slow pace of the show did not help. In the end Yamamoto came out dressed in a jacket that had “No Future” embroidered on the back. Is the world ending? Is fashion with the capital “F,” the kind Yamamoto enriched the world with, dying? Is the old master tired and disillusioned? Make your own conclusions.

Saturday morning at Haider Ackermann things were looking gray, literally. The designer, who is known for his mastery with jewel tones and richness of color, surprised us with an opening salvo of lovely gray tailoring before switching, somewhat jarringly, to his already familiar display of sexy luxe. There was also leather and extra-wide belts in which no person realistically could sit down. I am not sure such modern corsettery is relevant in 2019, when women continue to fight for their right to be comfortable; to Ackermann’s credit, he subjected his male models to the same treatment. Overall, the show seemed somewhat incoherent – Grecian details here, polka dots there, a color scheme that was all over the place – a series of vignettes as opposed to a continuous story. One couldn’t help but wonder whether Ackermann is losing his finger on the pulse of fashion, despite his obvious talent.