Paris, France – Once again the fashion horde descended on Paris, the city of great beauty and inconvenience, to see what the best of menswear designers would offer. Hobbled by a transit strike, the city reminded the fashion bubble denizens that there is a real world outside with people who shop at supermarkets and cook at home and who have to take the metro. Complaints about traffic were the talk of the week, largely alien to me since I learned to use the rental electric bikes last summer – my greatest Parisian discovery since that Japanese-owned coffee place I’ll never tell you about.

My own adventures began at Undercover, and one could hardly ask for a better start. Jun Takahashi treated us to a spectacle of a dance performance he dreamed up with Suspiria’s choreographer Damien Jalet. It was based on Akira Kurosawa’s film “Throne of Blood,” a rendition of Shakespeare’s Macbeth set in medieval Japan. There were three scenes, and the final one, with arrows raining down on the protagonist was most awe-inspiring. As were the clothes, brilliantly layered, medieval costumes turned into modern day wear. This was no easy task, Takahashi told me after the show, but he felt that the dance performance somehow allowed him to try. This interpretation was particularly evident in the leather jackets that were quilted and embellished to resemble samurai armor. And what’s a leather perfecto today, if not modern armor? There were hoodies with yukata string closures and raincoats with kimono sleeves and collars. Another stand out for me were the two priest coats, in black and white with embroidery on the back.

Two auteurs are better than one, I thought, sitting at the Rick Owens show the next day. On the runway Owens makes no concessions to anyone or anything – not the demands of the fashion zeitgeist, not the consumer preferences. Here is a designer who could sell a thousand logoed hoodies a year, if he wanted to. Instead, his collections get more and more challenging, more thought-provoking, more… Owensy? Just when you think the platform boots couldn’t get taller, they do. Just when you think the shoulders couldn’t get stronger, they do. This collection, called Performa, was inspired by Owens’s (and Michele Lamy’s) experience at the eponymous art fair. This was less obvious from the clothes; more obvious were the David Bowie influences. One of the most famous capricorns (one of the least famous is writing this article), Bowie blazed the trail of pop culture subversion in so many directions, that in retrospect it’s surprising to think that Owens hasn’t gotten to him sooner. But Bowie perfectly fits the very welcome glam rock direction Owens has taken in the past few seasons. There were references to the Alladin Sane era of Bowie in the one-legged knit leotards, and to the rocker’s famous costumes designed by Kansai Yamamoto in the linear embellishments of tailored jackets. It was all so welcomingly different from anything else one sees, that one couldn’t help but root for it. 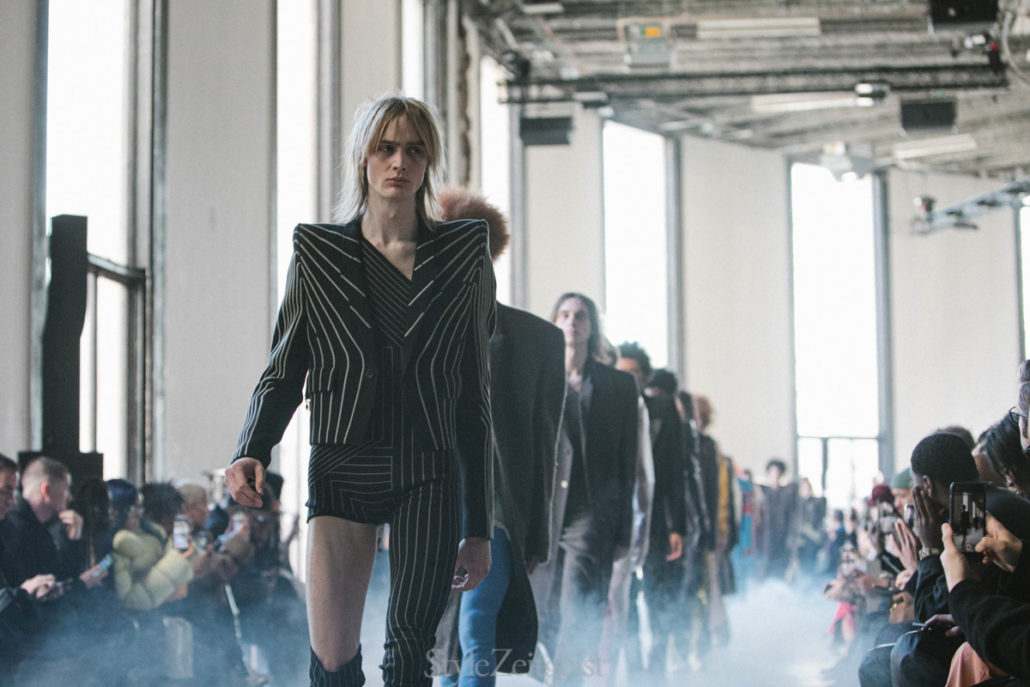 Three auteurs are better than two, I thought at Yohji Yamamoto that evening. Here is another designer who has insisted on his signature aesthetic for decades and who has mined it so deeply that every season you think there is nothing left, only to realize that you are wrong. There were subtly embellished coats, and cut off hand-painted knits layered over tailored jackets. Yamamoto, with his dry, self-referential humor, got a chuckle out of his audience this time when we realized that one of the coats sported a “Naugthy Yohji” appliqué on the back. The humor partly comes from anger, as it so often does. Yamamoto is not the first independent designer who has expressed disdain for what is going in fashion today, its corporate takeover that inevitably comes with the blanding of fashion (I’m reserving The Great Blanding of Fashion title for another article). He is also obviously tired, having done this for so long, and this tiredness has been to put a cross to us time and again, but this time the clothes were just too good for feeling listless.

At Dries Van Noten after the clothes weren’t good enough. Or good enough. Whichever way you want to look at it, the collection lacked something. That something I realized was the strong graphic element that has made Van Noten the darling of the fashion world and has given him his unmistakable signature. Instead, Van Noten relied heavily on fur, the heavy fox collars draping down models’ shoulders. The fur was fake, obviously – I mean, who in their right mind would want to commit PR suicide this day and age by using real fur, and so much of it, on the runway? This, of course, did not deter knee-jerk reactions of self-righteous culture warriors who are only interested in hearing themselves shout, their narcissism being their first priority. Van Noten had to have known this, so I hope this was a quite flipping off of our insane PC culture. In that case, bravo. 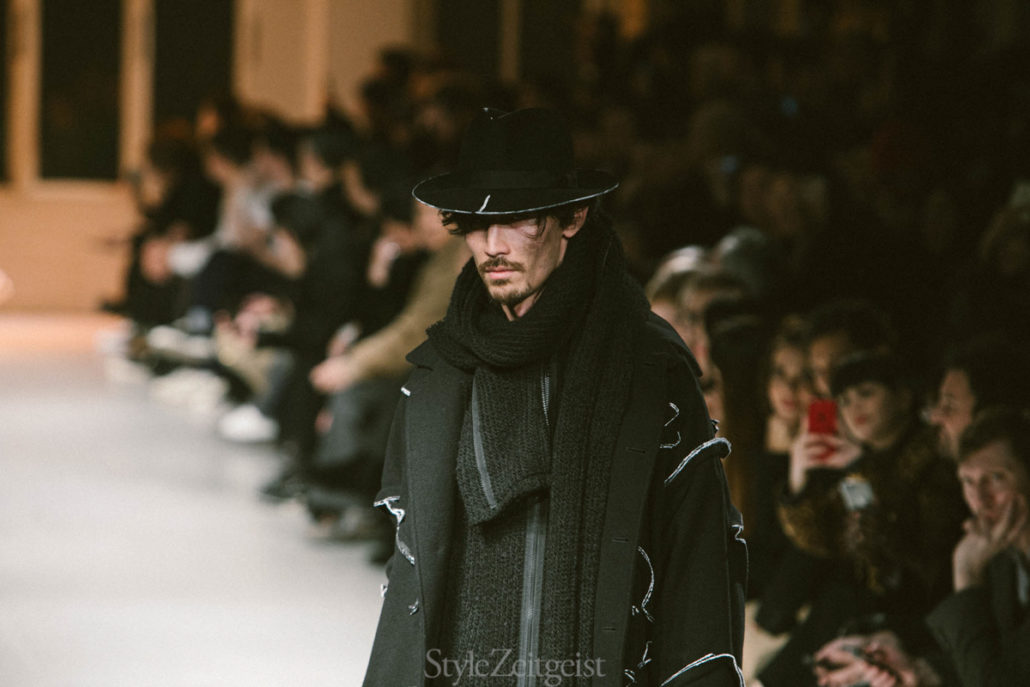 Friday morning Junya Watanabe treated us to another lighthearted show, just like he’s been doing in the past few seasons. Levity is not something one associates with Watanabe, who has gone through the rigorous school of Kawakubo, not really talking to the press, not really explaining his collections, not taking a bow at the end of the show. And yet, levity was in the air in a collection dedicated to Italy, the country known for its leisurely approach to life. Here were just regular guys in a piazza of whichever Italian town you want to imagine, getting coffee and chatting about nothing in particular, in no rush for anything. They were of middle age, and Watanabe unabashedly champions that sweet spot of life where you still have plenty of youthful energy to do things, but enough experience to be more selective about what life throws your way. Oh, and you also tend to have more money for designer clothes. I believe that in 2020 fashion shot-callers will realize that young people (except those in China) don’t really have money for designer fashion. Those of middle age and older do. Watanabe is ahead of the curve on this one. And the clothes were designed for men of middle age (obviously no one prevents anyone from wearing them), tailoring was made casual by splicing different garments together, wool jackets had puffer backs and MA-1 sleeve pockets and, in my favorite look of the collection, a wool coat was married to a hooded parka. The outerwear featured a nod to Italian’s rich motor industry in the form of patches with logos of Pirelli, Fiat Arbath, Moto Guzzi, and the brake-manufacturer Brembo.

At Comme des Garçons Homme Plus later that day Rei Kawakubo presented a collection that was so jumbled as to render it almost beyond comprehension. Blazers, the CDGH+ staple even in today’s decidedly casual menswear world, were seemed to be made from whatever random fabric leftovers were lying on CdG’s atelier floor. Tartan was mixed with leopard, pinstripes with jacquard, and so on. If there was one thing to be teased out of this was that Kawakubo also subscribes to the theory of “Whatever,” that she sees that our postmodern fashion has lost all meaning, that anything goes, and that has made fashion an incoherent mess. This seemed to be confirmed by the randomness of the models’ walk. As to who will actually wear the mess that Kawakubo sent down the runway remains a big question mark. Usually the answer is, “somebody will.”