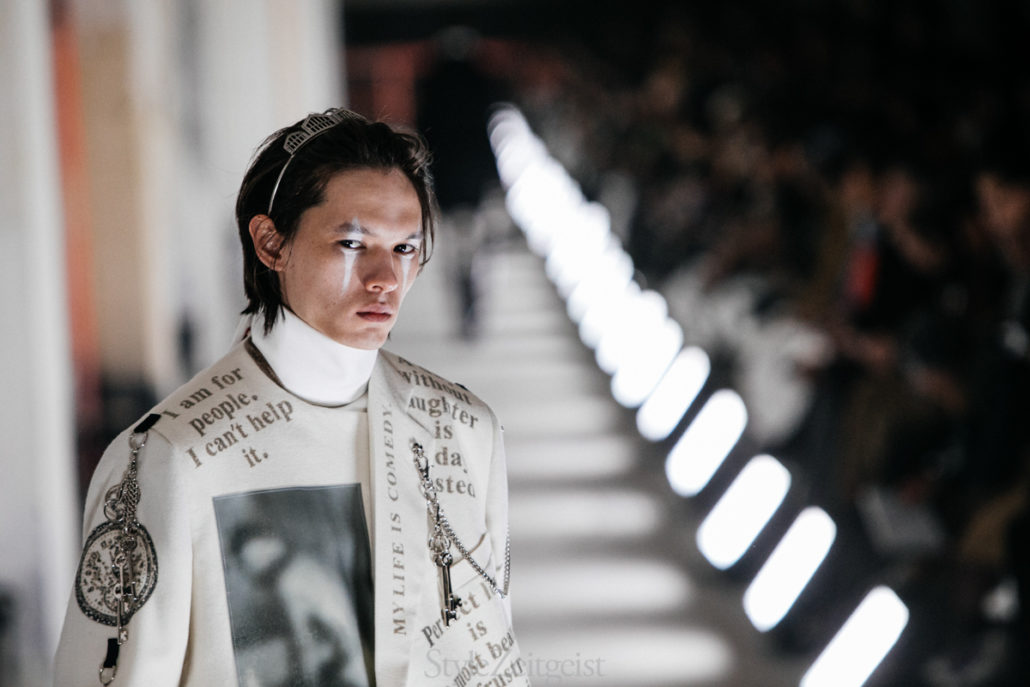 Paris, France – At the Sacai show Saturday I was thinking whether a designer who sticks to a formula will sooner or later tire her audience out. For now, at least for me, Chitose Abe’s answer is a definitive “No.” Her design direction is a recipe with ever changing ingredients that keeps the dish tasting both delicious and fresh. The key here is that her technical mastery of construction is so complete that it has not yet failed to impress. So it was with this collection, for which she imagined turning an outfit into a single garment. The first look was women’s, and consisted of a peacoat merged with a bomber bottom and trouser legs slashed open and turned into a peplum; the three together made a coat. Varsity jackets were welded to peacoat bottoms, double-breasted coats had nylon MA-1 inserts and so on. The pleated dresses sported custom bandana motifs by an artist Dr. Woo. Of note was a collaboration with  Ten-C, the technical outerwear brand that used to be designed by Paul Harvey.

That weekend the Paris transit strike continued unabated, which made getting to and from TAKAHIROMIYASHITATheSoloist’s show a particular adventure. But it was all worth it. Miyashita put on a show that was deeply personal and touching. In part it dealt with his own mental health issues and much of the clothes resembled straight jackets made of wool gabardine or corduroy. Coupled with tall riding boots and shorts, they formed a refreshingly atypical silhouette. There were prints of quotes by Charlie Chaplin. The complexity of design could only be fully appreciated at the showroom. These garments were radically new and they will surely challenge the wearer.

After the show was over, my task was to get from Montparnasse to the Marais to see the show of Geoffrey B. Small. The temperature dropped, the Metro was shut down, and the traffic was atrocious, with Ubers costing 40 euros. Half-frozen from my glamorous half-hour bike ride, I made it after all, and I was not disappointed. Small’s collection was dedicated to Ric Ocasek, the late singer of The Cars and a fellow Bostonian. But the show was anything but mournful; there was levity in both the clothes and The Cars soundtrack. This was a welcome turn for Small, who tends to be radically serious in both his approach to clothes-making and his worldview. His vision of rock-and-roll style interpreted solely through tailoring, without a hint of leather or denim that would be natural to expect made for a unique take. Ocasek often sported a pair of aviators, and for this collection Small collaborated with the eyewear label Rigards on custom aviator sunglasses made of titanium. At six grams they were the lightest glasses I’ve ever handled. 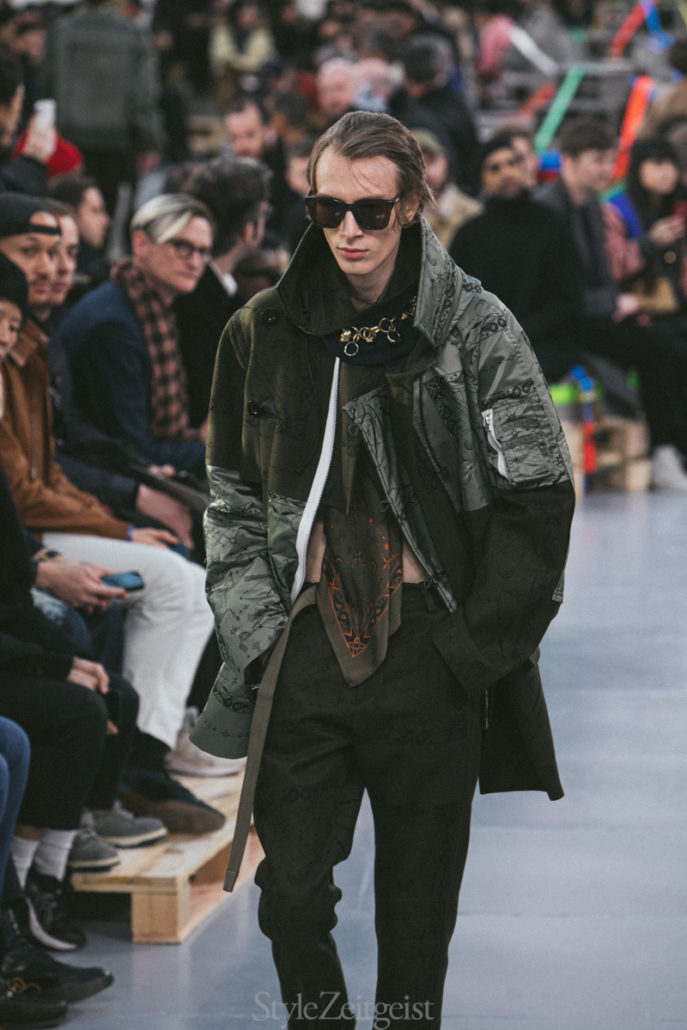 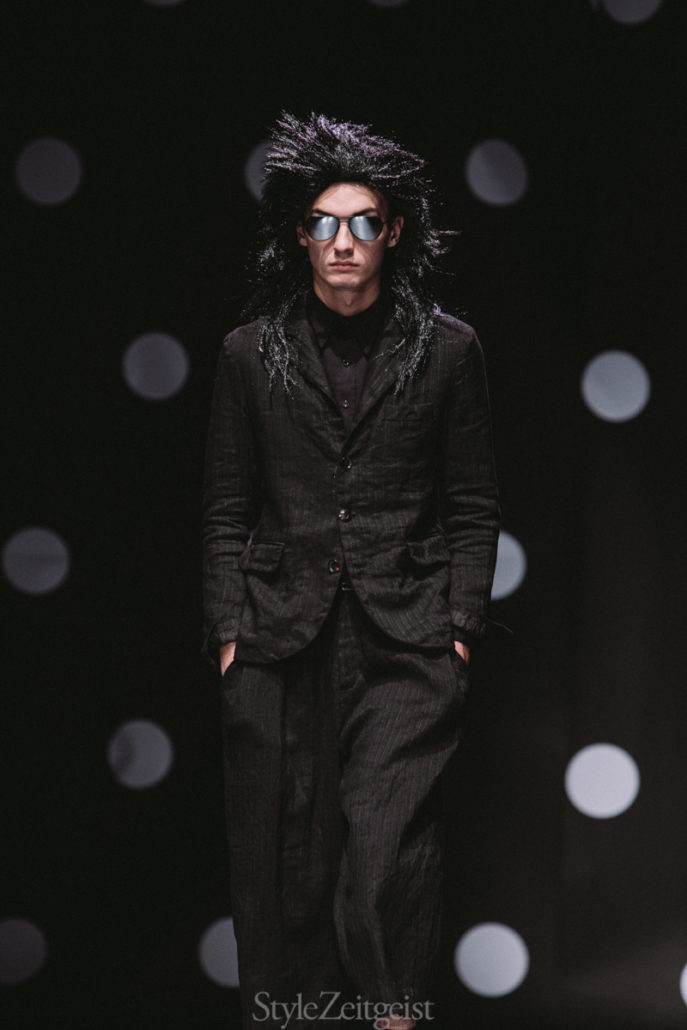 My last show of the week was Craig Green. It was his Parisian debut, surely much to the chagrin of London’s fashion week organizers. But Paris is where the designer of Green’s caliber belongs. And Paris responded – in attendance were Michele Lamy, Valentino’s Pierpaolo Piccioli, sporting a Craig Green raincoat I almost bought a few days prior, and Rei Kawakubo’s husband Adrian Joffe. Like Sacai’s Abe, Green also works within a formula; the work is geometric, with lots of right angles; you can expect strings and shoelaces as ornaments, and an allusion to hospital scrubs here any there. The clothes Green presented seemed simplified in their lines, but this simplification was deceptive. Green is also a designer in danger of the formula getting stale, and this show was a mixed bag of newness and stuff that looked a bit too familiar. But what’s important about Green is this – he is one of the few designers who looks to the future instead of referencing the past. It’s definitely something to be appreciated.

A few notes on designer who present in showrooms. Forme d’Expression showed another desirable collection of tailoring and knitwear, with many new patterns. I liked the narrow lapels on the tailored jackets and throne collar coats, chunky grandpa cardigans, and knits whose weave was reversed midway.

During our conversation in his showroom Boris Bidjan Saberi ruminated on sustainability, but not in any eye-roll-inducing way. He was wondering whether he should continue adding more clothes to the world altogether. It was not the first time I heard this sentiment expressed – Dries Van Noten had once told me the same thing. The answer is obviously, yes, Saberi should continue making clothes from natural materials with handcraft techniques, sturdy garments that are built to last. Because his clothes are better than so much of what’s out there. There was not a lot of progress in the garments themselves, but boy were they brilliant – the heavy cashmere coats were particularly sumptuous. Instead, Saberi concentrated more on accessories like half-body vests that complement the clothes. There was more good stuff at 11, Saberi’s line that hews closer to streetwear. With the Solomon collaboration he continues to make the only sneakers I would ever wear. And then there was a capsule done in collaboration with Massive Attack (more on that in a separate article).

At m.a.+ Maurizio Amadei continues to build a wardrobe for adults that feels both mature and edgy, and has an undeniable elegance to it. With m.a.+ you can go the tailored way or the rockstar way, depending on how you feel. This time you could pick either a great unisex coat made from patterned wool or a heavy black leather jacket with seven hundred silver crosses on it. Lenny Kravitz, if you are reading this, call me.