I am straight. This must be stated for the purpose of this article, because it’s about my history of buying women’s clothes. While in our non-binary times articles on crossing the male/female sartorial gender divide are in abundance, they tend to be written by gay men. These go hand in hand with media missives about so-called “new masculinity” and directives to men to carry purses. Publications like Dazed, self-appointed leaders in gender fluidity, are full of pictures of young slim boys in women’s dresses and high heels. If such a media landscape feels alien to you, I understand. Created with best intentions, to break stereotypes, by now it seems to be perpetuating a stereotype of its own, that women’s clothes are necessarily those that possess inherently feminine attributes and are reserved for the gender-fluid. But women’s clothes run a wide gamut, and if individuality is indeed a cornerstone of modernity, then the degree of masculinity / femininity that an individual is comfortable with should be set by the individual and not by societal forces, of which the fashion media is one.

I bought my first piece of women’s fashion in 2003. It was a pair of Ann Demeulemeester combat boots that was famously modeled in the September ’03 Vogue US by Nicole Kidman. They were made of buffalo leather, with zippers on each side and straps around the ankles. I would have dared anyone to say they somehow made me look feminine. On the contrary, they made me feel as confident in my image as any piece of menswear could have. 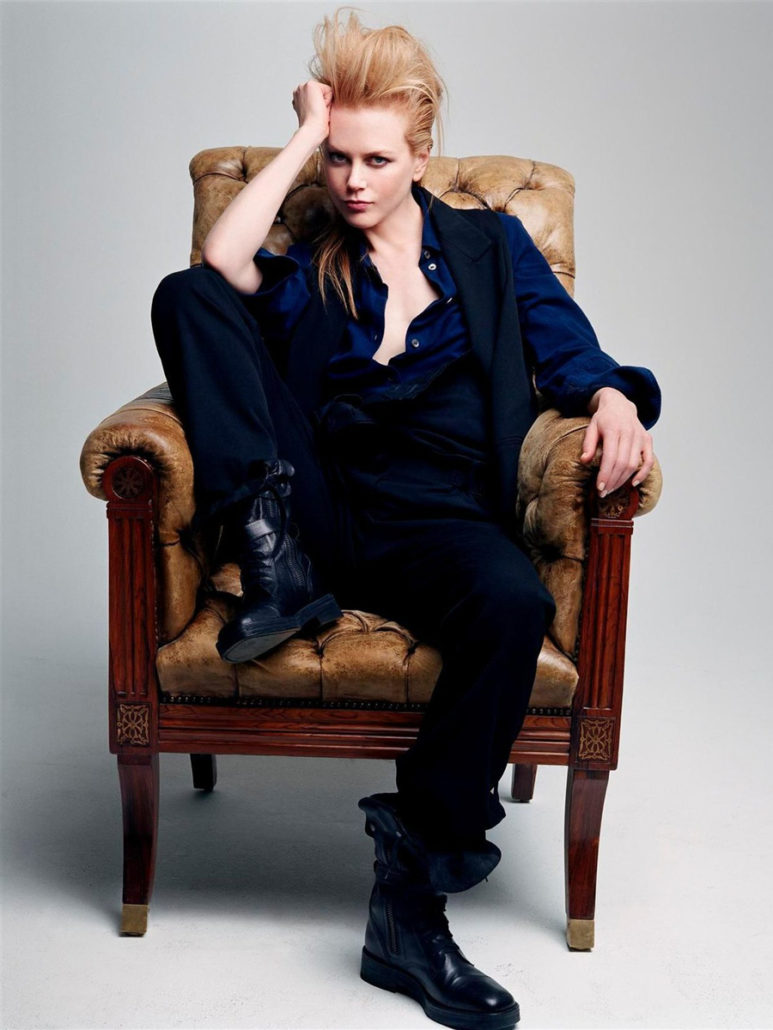 Nicole Kidman in Ann Demeulemeester by Craig McDean, Vogue US 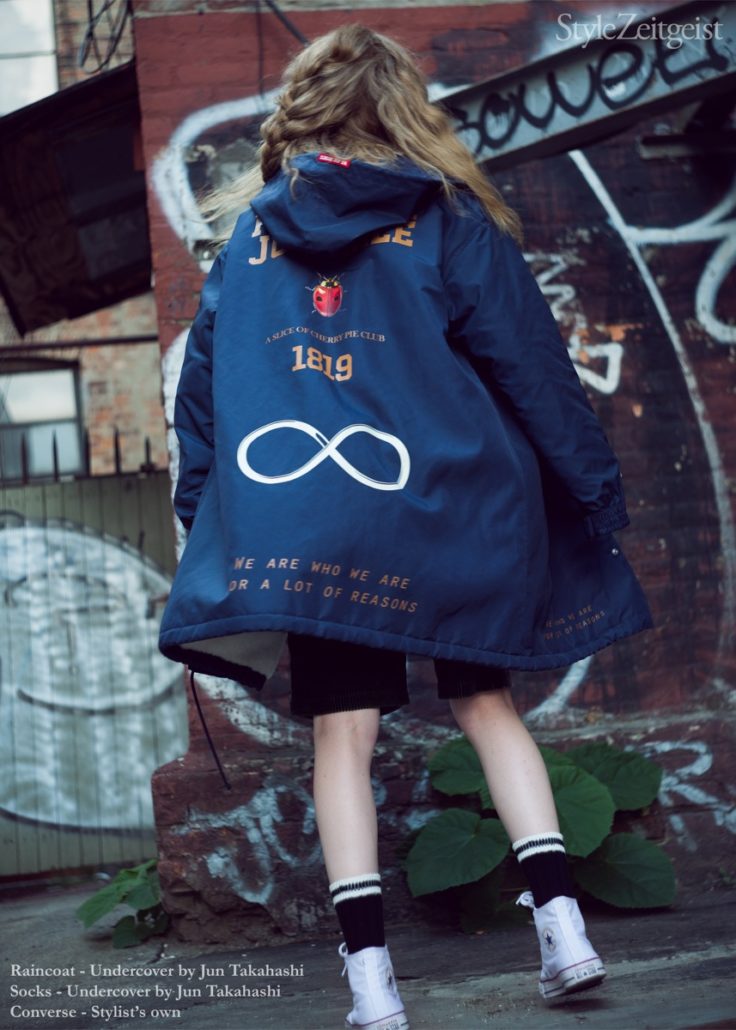 It takes a certain comfort with oneself, perhaps even courage, to cross over to the women’s department. This isn’t your domain. You are entering not only a different physical space, but a different mental space. A trespasser, you leave behind societal norms, and that is no small task.

And so I hovered at the edge of the women’s shoe department at Barneys, looking at a sea of Manolo Blahniks and Carrie Bradshaw wannabes. But, somewhere in there amongst the plush velvet, stockings, and pedicures I knew there was the best pair of boots I ever laid my eyes on. So, I crossed over. I don’t remember the details though it’s tempting to write that I broke into sweat and my pulse raced and stuff like that. What I do remember is a sense of euphoria that washed over me upon leaving the department store clutching my prize like an eagle his prey. I wore those boots to death and I still have them.

“What I am doing when I am buying a women’s garment is simply expanding my options.”

Over the years, I have made plenty of such decisions – I own footwear, pants, scarves, and outerwear that were technically made for women. To me there is nothing particularly feminine about them. What I am doing when I am buying a women’s garment is not some transgressive gesture of rebellion against conservative societal norms – after all I live in a 2020 version of New York City – but simply expanding my options. Sometimes it just happens that something a designer made was part of a women’s collection, like those Demeulmeester boots.

Another example – one of my all time favorite shows by Undercover was based on the film The Perks of Being a Wallflower. It was a women’s show. In its finale, set to David Bowie’s “Heroes,” a score of models came out wearing different versions of a raincoat with graphics and lines from the film. It was one of the most touching moments I ever experienced, at least as far as fashion goes. I had to have one of these coats.

The women’s garments I own are neither pink nor frilly, nor whatever else a stereotypical mind conjures up on hearing the words “women’s clothes.” The term we used to use for such clothing, before it went out of fashion, is “androgynous.” When androgyny, a combination of masculine and feminine characteristics, was introduced as a concept in fashion, it skewed heavily towards women. Few people who are into fashion don’t know the infamous “Le Smoking” image of a woman in an Yves Saint Laurent frock, shot by Helmut Newton for Vogue Paris in 1975. But while it became fine for women to borrow from menswear, it was still largely a taboo for men to wear any piece of clothes made for women, no matter how androgynous it looked. Men were only allowed to be androgynous as entertainers, like David Bowie or Prince, because they did not belong to our everyday world. 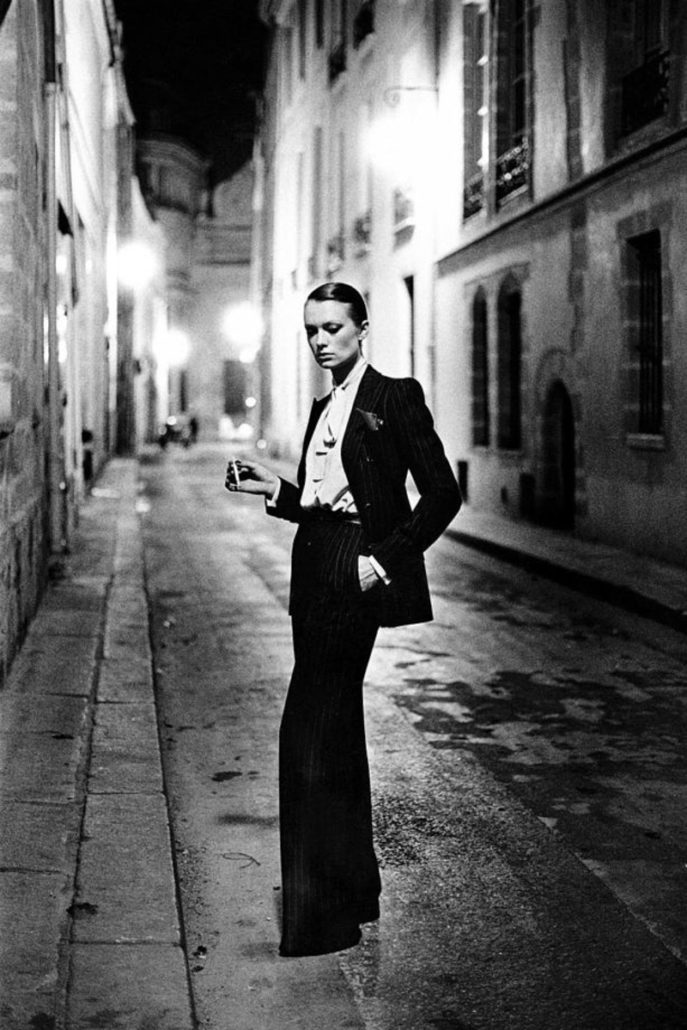 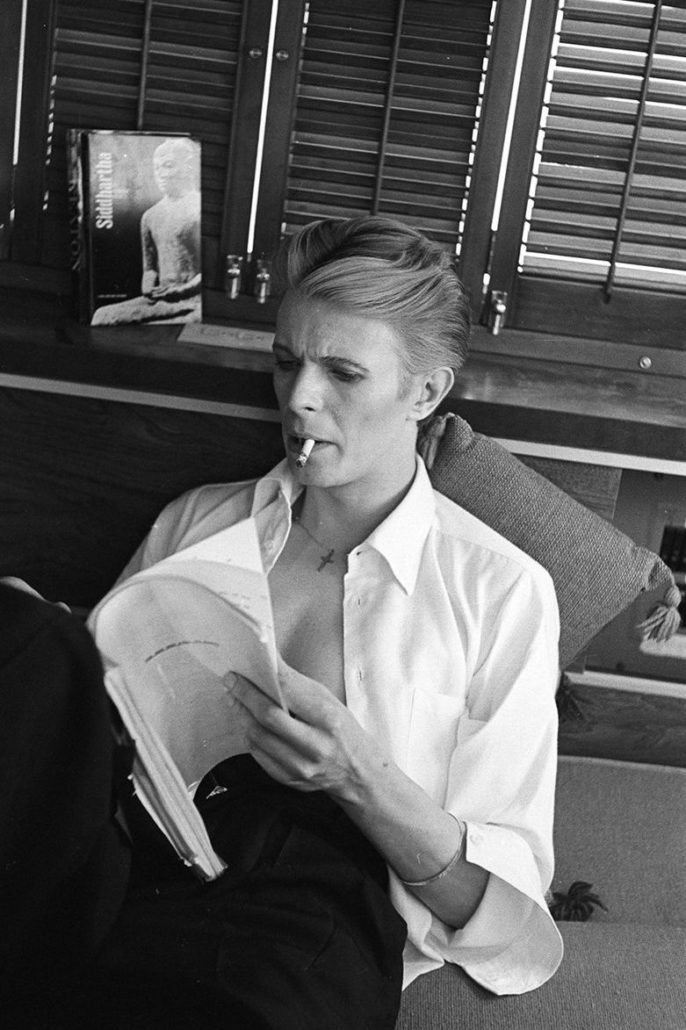 In fashion this state of affairs slowly began to change in the ’90s, as some designers began to offer clothes that brought the two sexes closer. The two that have notably influenced the way I dress are Ann Demeulemeester and Rick Owens. They did it in their own ways and for very different reasons.

Demeulemeester has always sought to underscore strength in women and fragility in men, characteristics whose display even ostensibly progressive societies have actively discouraged. Sartorially, this inevitably meant that Demeulemeester’s clothes for men and women tended to merge into each other. No image was more influential to the young Demeulemeester than the singer Patti Smith in a white men’s shirt on the cover of her album “Horses,” shot by Robert Mapplethorpe. I will never forget how during my first interview with Demeulemeester, in 2008, when I asked her why she makes her women’s footwear so roomy, she scoffed, “Are we modern? Or are we old fashioned?”

Demeulemeester’s vision of modernity also included a healthy dose of romanticism. She saw men and women as friends and partners; for her a couple that looked similar meant a certain kind of sartorially expressed kinship. That was the root of her androgyny.

For Rick Owens, the matter stands quite differently. His work, as he told me, is revenge against Middle America he grew up in. It is a decidedly queer, in your face statement that says, “You may have fucked with me as a kid, but I am fucking with you now.” This includes putting men in skirts, dresses, and platform boots. The fact that Owens succeeded in putting a large number of straight males in drop crotch pants and elongated tees is nothing short of subversion, doubly so because no one has bat an eyelash. I favor another Owens silhouette – tight jeans tucked into boots and a long top. It’s not a far cry from wearing a mini-dress over leggings. Does it make me feel somehow emasculated? Not in the least. 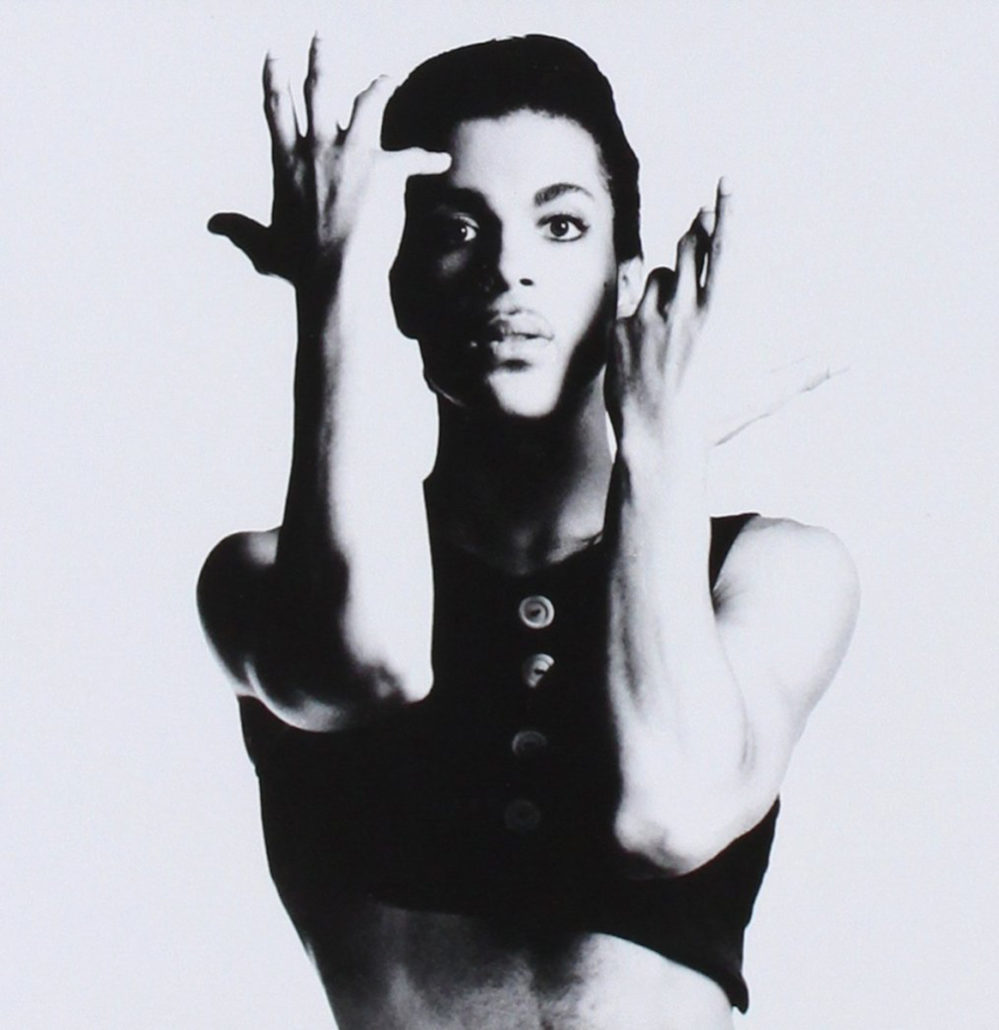 Prince on the cover of Parade by Jeff Katz 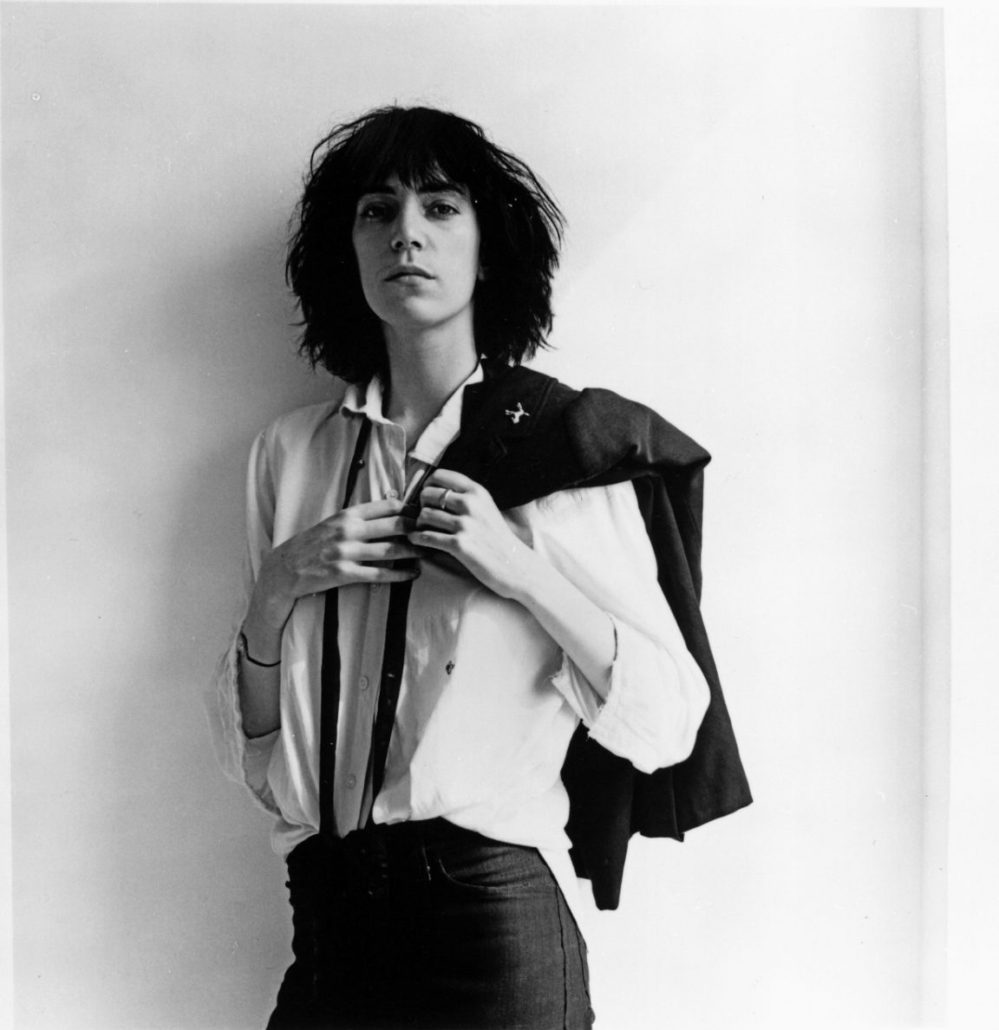 Patti Smith on the cover of Horses by Robert Mapplethorpe

I have my heroes and I hope you have yours. Today it may be designers like J.W. Anderson or Grace Wales Bonner, who are pushing boundaries in their own ways. In certain places in the world, which tend to be large, global, forward-thinking metropolises, the crossover in dress between the sexes is unprecedented. There is a newfound culture of permissiveness and relaxation of norms that did not exist to such a degree even ten years ago. And though we have a very long way to go until large swaths of conservative hinterland accept this, the seeds have been sown. It’s an exciting time to dress, indeed.

This past winter, my wife and I stopped by Uniqlo in SoHo to buy some basics. As she was browsing the women’s section, she pulled out a black wrap-around quilted skirt that in its silhouette resembled a kilt. She tried it on over her jeans and then handed it to me, saying, “I think it will look better on you.” She was right. I bought it.