Elena Dawson: A Room of One’s Own 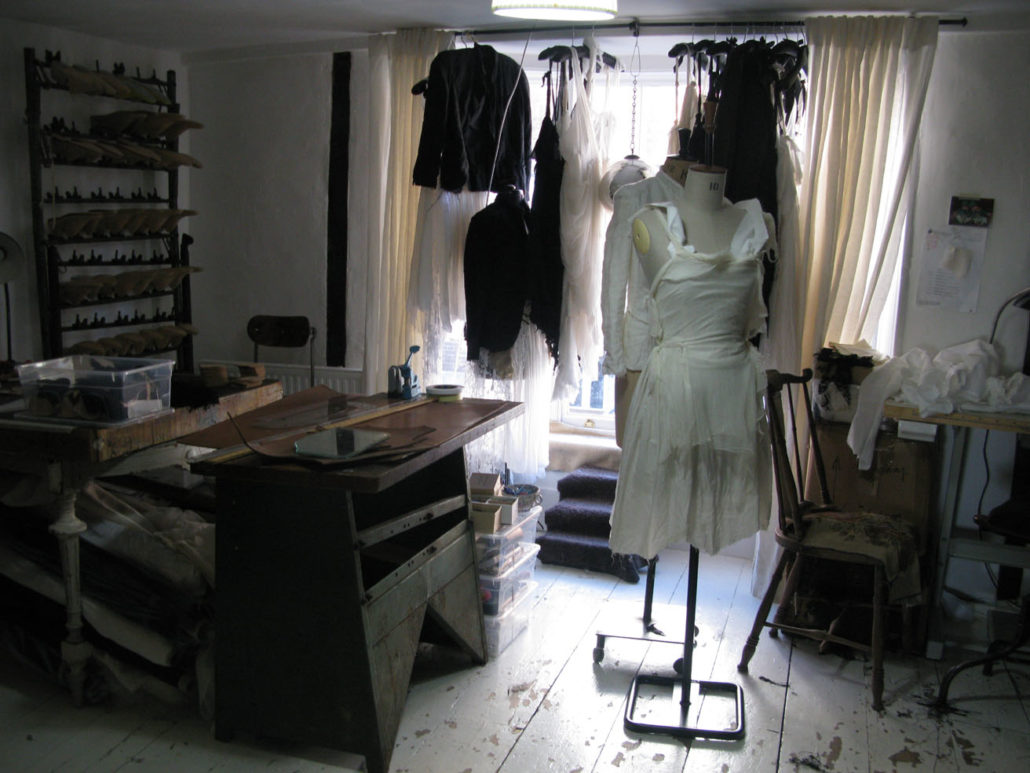 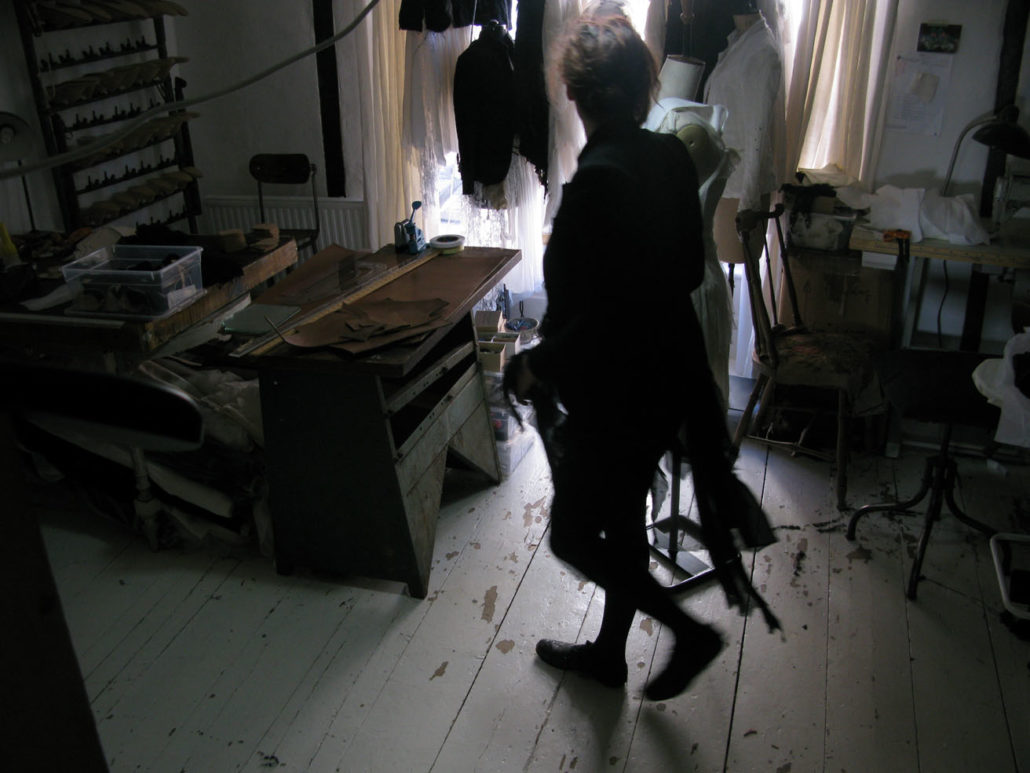 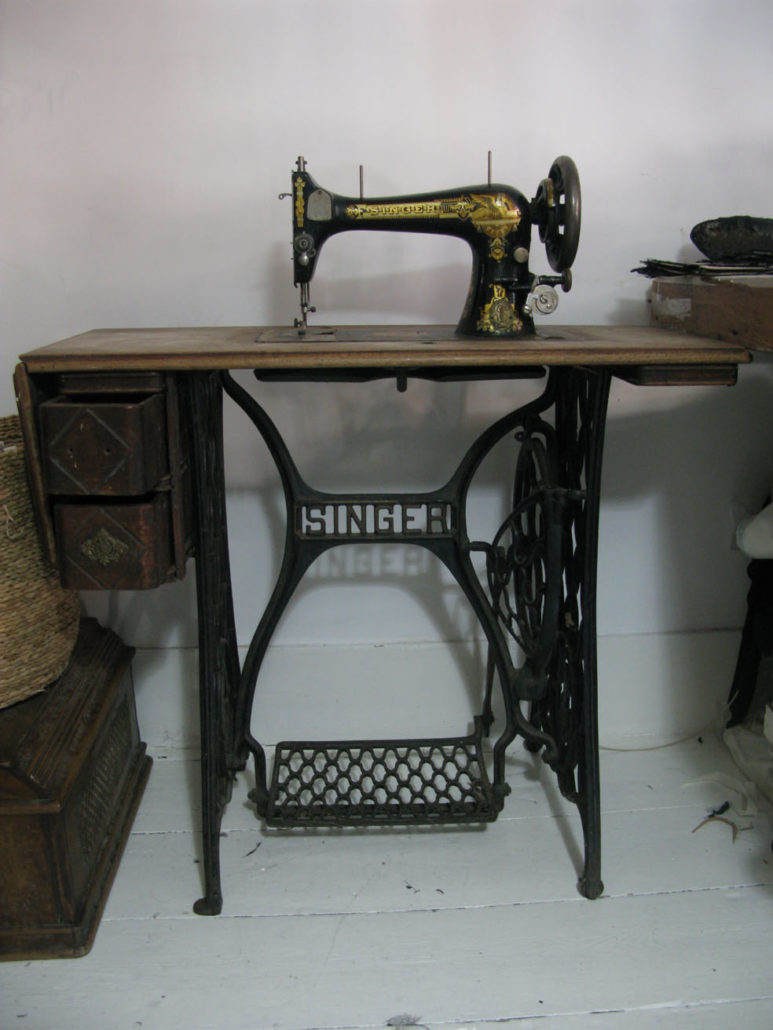 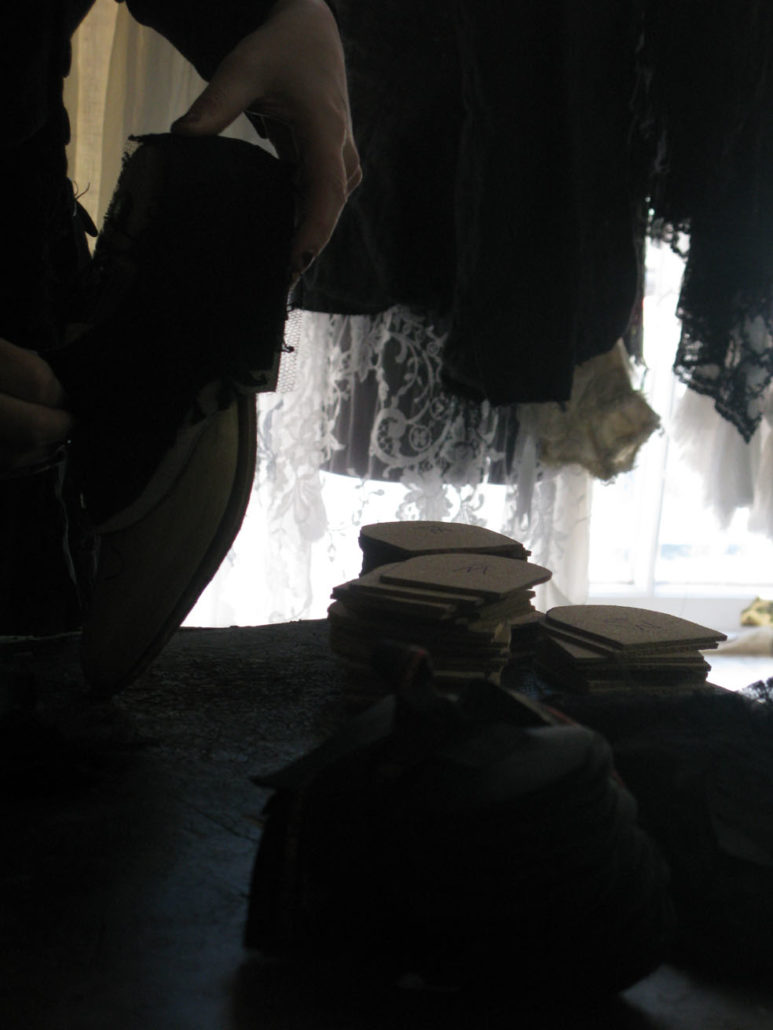 Editor’s Note: This article was originally published in 2011 in the first print issue of the short-lived Sebastian magazine from London’s Hostem boutique. I thought it deserves a wider audience, so I decided to reprint it with permission. I made nominal changes, but its 2011 version, including the images, is pretty much preserved.

The British designer Elena Dawson works out of time. Her Victorian frocks with unfinished seams and hanging fabric strips speak of ghostly things, simultaneously ephemeral and imprinted with history, the stuff of Tim Burton and Helena Bonham Carter, a witchy presence in the world that no longer cares for fairy tales.

Dawson, who lives and works in her studio in the South of England, has been producing her collections for little over two years, but she is no novice clothier. For years she has played an integral role at Paul Harnden, the elusive Canadian-born designer with a cult following. There, she set up the clothes-making operation at a shop that previously produced mostly footwear.

Like Harnden, Dawson gravitates to things past. “I’ve always had a fascination with clothing and its construction, historical context, and aesthetic form,” she says. “As a child, I was mainly interested in paintings from the Elizabethan era; I liked to make clothes out of black bin bags to reflect this period – it’s not too different from the way in which I construct now.”

Many of Dawson’s influences are from her own family – her father is Anglo-Indian and her mother is Irish. But it’s the spirit of her grandmother that affects Dawson the most. “My grandmother was a dressmaker, which has been a huge influence in my life; I have all her old pattern books and lace,” says Dawson. “I still wear her black cotton poplin dress she made. I also still have her Victorian treadle sewing machine, which I used to play with as a child. I was always fascinated by its mechanisms, secret drawers and gold Egyptian scroll-work on its head. I thought it was some sort of time machine. It’s probably why I still have a fascination with Victorian Industrial design and of course sewing. She died before I was born, but the presence of her in our family house is still there.”

Maybe it is this ghostly presence that informs Dawson’s work, which reflects her fascination with death. “The relation between clothing, ritual, and death is of great interest to me,” says she. “In some respects, through clothing I am also working through my relationship to death.”

When she was a kid growing up in London, Dawson wanted to be an archeologist, but in the end she decided to attend the Art College, and then the University of Brighton to study Fashion Design and Print. After graduating, she began working as a seamstress, which turned out to be an invaluable experience. “I draw on the knowledge I learned at the tailors still now in the way I make clothing,” she says. “When you work on alterations you are really tearing the guts out of the garment, performing a sort of autopsy—you really get to see a garment at its most vulnerable point. Observing this state of semi deconstruction in the making of a garment or shoe is what I like to retain in my finished work.“

At the same time, having met Paul Harnden, she began setting up Paul Harnden Clothiers as an addition to Paul Harnden Shoemakers. “I was in a relationship with Paul for a few years before we decided to start making clothes together in 2000. It just seemed like a natural thing to do—he was a shoemaker and I a dressmaker,” said Dawson. “Our first season consisted of three garments; the coat is still the collection now, the Raincoat. We didn’t have any big plans; we were just making clothes we wanted to wear.”

There is a sense of decayed phantasmagoria that lies at the heart of Dawson’s evanescent creations. For her, the garments, the fabrics, and production methods are also a sort of a time machine. “I wanted to hand make all my pieces,” says Dawson. “My first collection was really about the morphing of shape, and I was working with traditional wool suiting and rubber. I was finishing things to an extreme – layering the insides of blazers with fine silk gauzes and hand finishing seams and hems. I stopped doing that for my second collection. I just started to stop making. By quitting the process in mid flow I ended up with half made garments. I found something in this in-between state that I continue to explore.”

Dawson eschews some of the commonly accepted design practices. “I work mainly on the stand and so all the dresses are done in turn and by eye,” said she. “I don’t measure cloth – my bodice is correct for sizing and that’s all I need as a guideline. I prefer to sculpt from memory rather than record my movements. Even if I wanted to make a pattern for my dresses, it would be absurd to try and plot these things out on paper.” In addition to the clothes, she makes all the shoes herself, working with light leathers and using oak bark leather for soles. Everything is made in-house, which is important to Dawson. Recently she hired an assistant, because she kept finding herself asleep on her workshop floor, exhausted from work.

She makes clothes the way some painters paint, getting lost in the process, being one with it. “I don’t like to over-plan a collection and prefer it to remain at the idea stage. I don’t want to explain it to myself – to be too self conscious of what I make when I’m making it,” she says.

Dawson prefers natural fabrics, including English wool, Irish linen, French lace, Indian cottons and wool paisley, and Chinese silks. “I love to work with silk and wool,” she says. “I always use some form of mohair mixed cloth in the collection. I also like to work with rubber, as it’s such a challenging way of constructing a garment. Making menswear, womenswear or a shoe is the same thing to me – I could make a chair or a pot using the same structure process. The materials I choose to use remain intrinsic to the finished pieces.”

Shying away from bright colors, Dawson likes to use white, black, and some hue of brown. “I always make something in color each season but I either end up dyeing/spraying it black or taking it out at the last minute,” said she. “I despise purity in one’s work, so it’s an area that I wish to explore – it’s just going to take me time.”

Dawson approaches making clothes for both sexes with the same methodology, or rather lack thereof. “I’ve always done menswear as I’ve always worn men’s and women’s clothing,” says she. “My work is more about the making process, so I make menswear and womenswear together. I use the same materials. It’s too restrictive for me to think of them as different. When I’m making I prefer to think of nothing.”

In 2006, Dawson left Paul Harnden in order to make clothes that completely fitted her aesthetic dimension. She moved to East Sussex, where she set up a workshop in a fourteenth century building that sits above a railroad tunnel. She lives in the same building with her boyfriend, philosopher Dylan Trigg, and their two affenpinschers. Her grandmother’s Singer is there with her, standing against the wall, a reminder of the transience of all things.