What Is a City Without Its People? 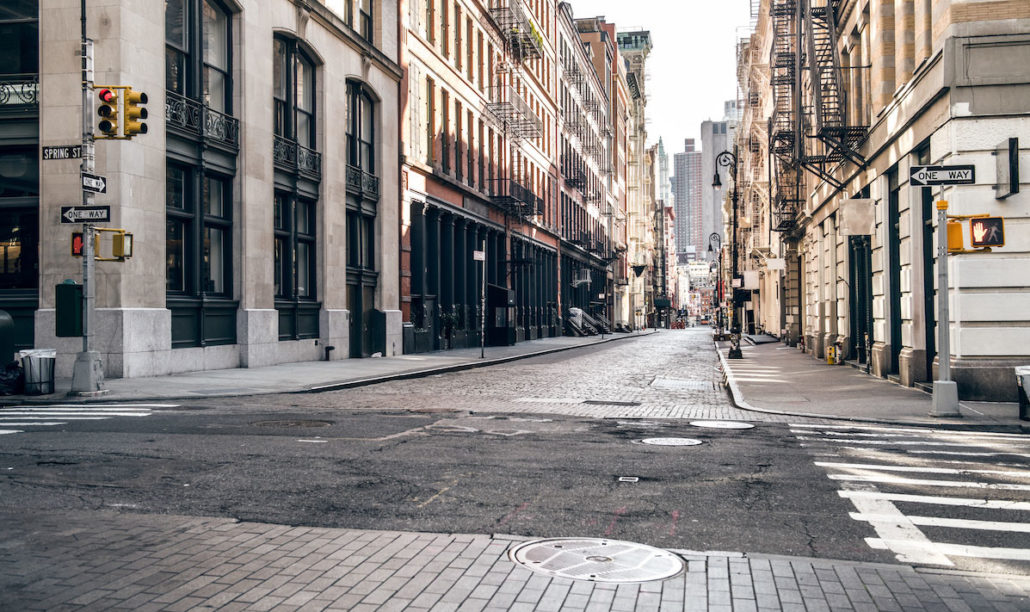 Covid-19 has been raging through America and the rest of the world for a while now, allowing for some reflection from the fashion media. So far we have seen two stages – first, a rush to prognosis on the post-pandemic fashion industry; second, various doomsday scenarios of how our work-from-home lifestyle spells the end of fashion. According to these, fashion ends with all of us wearing sweatpants. Such clickbait, along with numerous reports on rediscovered joys of suburban living, prompted me to reflect, again, on my life in New York, and particularly how it relates to matters of style.

My interest in fashion is both personal and professional, and so I often find myself in the street. In the age of street style photography and Instagram, most of which is now heavily professionalized and managed, it is the only unmediated milieu left. Unlike the peacocking outside of fashion shows that by now feels completely staged, the street is where the real action is. My preferred spot is the intersection of Prince and Crosby in SoHo. On a nice weekday afternoon you may find me sitting on the black metal steps of the Equinox gym with a cup of coffee, people-watching. I do nothing in particular except look. I try to suspend my judgement and simply observe, taking in the melange of passerby outfits. I try to observe the whole and also see if any stylistic detail strikes me in particular. I take note of any recognizable brands, or even better, a recognizable garment that made it off the runway and onto someone’s back.

In my observations the point is not whether a particular person looks noteworthy. What is more important than their failure or success is the effort. And there is plenty of effort on display, because in a city like New York at least for some there is an understanding that when you go out your front door, you are entering into a contract between yourself and the city. The city possesses a certain allure, and you are part of it, so why not bring an allure of your own into it? I have always found it peculiar seeing tourists dressed as if they are, to borrow from David Sedaris, out to mow the lawn, admire some stunning Manhattan Art Deco building, without making the obvious, to me, connection, that just like that building they are also a part of the city’s picture. Why is it that we don’t have a problem lamenting an ugly building but are shamed into suspending our judgment about ugly dress?

In any case, you don’t see much in the way of cargo shorts in Faded American colors at the aforementioned intersection, but you do get a good cross section of the city, the rich (or most likely pretending to be rich), my-body-is-my-privilege girls in Soul Cycle gear, the streetwear kids, the head-to-toe logoed hypebeasts that look like fashion-sponsored NASCAR vehicles, and your art school kids who do wonders with L-train Vintage finds. Or maybe they are nothing like what I imagine them to be, but guessing is part of the fun. Also part of the fun, a returned glance, an exchange of compliments on one’s outfits, a question, “where did you get this?” These little moments in which you compare philosophies of sensibility are afforded by chance street encounters in a walking city like New York; something you can’t do from your car in Cleveland.

To be sure, an interesting-looking person is not necessarily interesting, and vice versa. We’ve all met plenty of well-dressed empties, and badly dressed philosophers. But for this exercise, the surface is the juice. As Oscar Wilde said, “It is only shallow people who do not judge by appearances. The true mystery of the world is the visible, not the invisible.” And though this is one of the many of Wilde quotes often taken out of context by those who only read quotes (in the Picture of Dorian Grey it is spoken by Lord Henry, hardly a role model), in this case it suits me well, because the sartorial canvas I observe is rich with detail – I am looking at the beauty of the particular, the kind that gives permission to do a double-take. In terms of style the double-take is where it’s at – an outfit catches your eye but at first glance you don’t quite know why, so you look again, this time closer, more searchingly, the instinctual giving way to the analytical. You make a mental note that may or may not stay with you, but the fleeting nature of observation is part of the game. The very transience and surprise of the encounters is what makes them special, like that time I was walking down Crosby and a teenager in a yarmulke, upon noticing my bleach-splattered denim shirt, yelled “Sterling Ruby!” across the street. There is an ease, an unencumbered stance, and a bit of communion in being around people who appreciate one another for things that are ostensibly on the surface yet very well may go beyond it.

There is a term for what I do; flaneur. It was popularized in the 19th Century by the French poet Charles Baudelaire, who praised the flaneur in his essay The Painter of Modern Life, “For the perfect flaneur, for the passionate spectator, it is an immense joy to set up house in the heart of the multitude, amid the ebb and flow of movement, in the midst of the fugitive and the infinite.” Flaneur’s basic drive is a passionate curiosity about the world around him, the desire to derive pleasure from the surface of things and of being in the present moment.

Covid-19, and the recent protests have changed that. In the age of pandemic and political unrest it may seem silly to miss people-watching. And yet, I would argue, that when we lose the people who make up the city, we lose the city itself. Throughout the 20th Century New York was one huge refugee center for the eccentric. People came to it to leave where they came from behind. Since 9/11 we’ve already lost so much of New York’s artistic, free-wheeling character and its freak spirit. It’s ironic that it took a terrorist attack for the rest of America to see New York as part of America, and not a place where bankers, Jews, and gays do their diabolical deeds. The middle-America tourists came in droves, and so did the chain stores that catered to them. And those who moved here after 9/11 brought the places they moved from with them. New York of today, filled to the brim with members of the basic bitch brigade feels increasingly sterile and downright boring. But sitting on that SoHo corner, watching kids trying to do something interesting sartorially, expressing themselves in whatever way they can, gives me hope. Without them New York is no longer New York. Style is a form of creativity. If creativity is your profession or your passion, there is simply no substitute for the handful of cultural capitals that drive culture forward. My secret hope for New York is that after all of this is over it will regain some of its edge. I hope that all those people who have fled New York and bought a ton of Everlane sweatpants stay exactly where they are and let the people who find it worth their while to dress up before they go out the door enjoy this wonderful city, and each other, again.