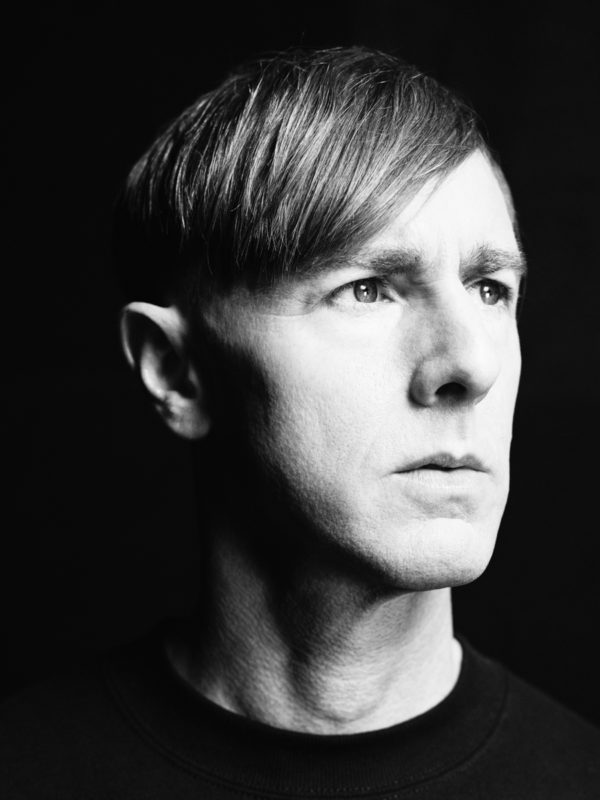 The Prada Spring / Summer ’21 collection co-designed by Raf Simons would’ve been big news in any season, but even more so in one where much excitement has been torpedoed by Covid-19. The show was good, and so was the music, written by the techno legend Richie Hawtin (aka Plastkiman). I caught up with Hawtin over the weekend via Zoom. He was in his studio surrounded by mountains of sound equipment. Hawtin has been spending most of his time in Berlin, shuttling on his bike between his recently opened Kreuzberg sake store Sake36, and his recording studio. Hawtin took an hour out of his day to chat about the making of the soundtrack and other things. The following interview has been condensed and edited for length and clarity.

Eugene Rabkin: So, what have you been up to?

Richie Hawtin: I’ve been splitting my time between the studio and our sake shop. We opened the shop amidst the pandemic, but it’s been doing well, becoming a place where we hang out with friends. It’s my introverted space, whereas touring is my extroverted space.

ER: I like how you are applying your passion to something completely different than music.

RH: : Actually, it makes total sense to me. Music brings people together. It’s social. And it’s a way of celebration, of feeling, of euphoria. I feel the same when I drink sake, especially with friends. It’s about a harmonious social feeling, which is what you’re trying to do on the dance floor, to unite people for a certain amount of time.

On a deeper and geekier level the sake brewers that I’ve met, when you start talking to them about tradition and innovation, it reminds me of technological innovation that drives electronic music. The best breweries are steeped in hundreds of years of history, but it’s the innovation and the technology that they bring into the brewing process that creates something unique, and hearing about that process sucks me in. I’s like taking a deep dive into a record.

And then there is the purely esthetic level, the visual language that goes into things like packaging, the way we package a record.

But deep down it’s the passion and the emotion. You can sit a bunch of musicians down and a bunch of sake craftsmen down, change a few words and realize that the conversation is basically the same. It’s these connections that people who are passionate about anything make, and that’s also how I met Raf Simons. 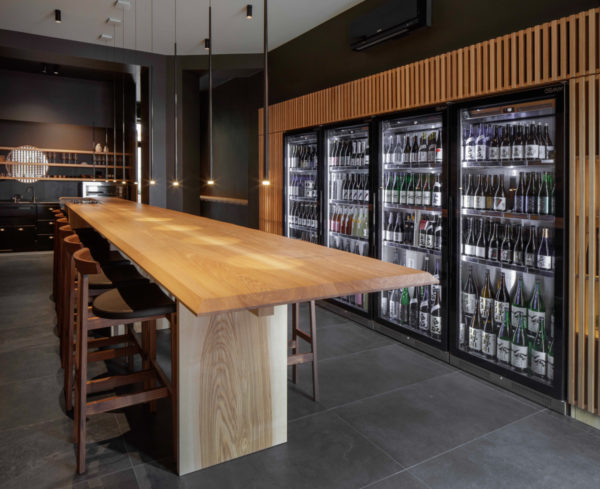 ER: Tell me about that and about the Prada soundtrack.

RH: I met Raf some years ago at 10 Days Off, a techno festival in Ghent. He was sitting behind me while I was playing a six-hour set. I didn’t even recognize him until someone pointed him out to me. I didn’t realize what a legend he was until I started working backwards from his work for Jil Sander. We finally reconnected through my friend the photographer Willy Vanderperre and the stylist Olivier Rizzo (editors note: both are constant collaborators of Raf Simons and also work with Prada), and we became friends.

At the same time I had this connection with Prada – I played her afterparty last year in New York, and I met Miuccia shortly afterwards, and I got the same vibe from her that I got from Raf – here was someone on top of their game, but totally cool and relaxed. So, the whole project was a neat circle.

RH: Here, Covid was a blessing in disguise. I’m a touring DJ, constantly on the road, and here all of a sudden I had a lot of time in the studio. I’ve basically locked myself in this room and used that time to take apart all the equipment, rebuild it, and reeducate myself on how I used to make music, and also think about how I wanted to make music now and going into the future. I was relearning some old techniques and learning some new technologies that didn’t even exist when I was really at the top of my game in the studio, which I would honestly say was like 20 years ago. It was an intense period of ups and downs, like “Oh, my God, I got it. Oh, my God, no, this is shit.” But slowly I was starting to crack some stuff and I finished a new F.U.S.E. single, and felt that momentum was coming. So when Raf called, internally I felt ready for this project.

Raf played about fifteen of my previous tracks for Miuccia, and they both honed in on the same three tracks, so that gave me the first sense of direction. After that we went back and forth with Raf pretty intensely. We had a long discussion about the show’s concept and about the technology they wanted to use, about the looks, the colors, the feeling. He wanted the show to look into the future, but retain a sensual, human element while dealing with the feeling of alienation. It took me about three hours to create the basic structure of the soundtrack, it came about very fluidly. Actually, it was too much, so over the next ten days Raf and I slowly began subtracting and molding it and getting a bunch of versions of different lengths together. We’d get on Zoom for an hour and literally go through each 30-second interval of the track. We also used some voice that I put through AI algorithms; just names of the models that were also on screens in the show’s video. We continued to work literally until the morning they were filming the show. I sent the final version at 6 a.m. and then slept til noon.

ER: This is not your first connection with fashion though. How did you get into fashion in the first place?

RH: In the early ‘90s I was a geeky, introverted techno kid who spent much of his time in the basement. I didn’t think about fashion beyond wearing a bit of black, but it wasn’t really on my mind about how I visually presented myself. Gradually, as I was leaving the small dark corner of the club and becoming a bit more public, I realized that fashion can be another way to represent the musical aesthetic that I was trying to get across. The first Plastikman record (Sheet 1), “Concept 1,” which came out in 1996 and is getting rereleased next week, is very stripped down. And, as you know, before people hear the music, they sometimes see a visual, whether it’s an interview or a record sleeve, and I wanted to embody that minimalism. Naturally, the first brands that resonated with me were minimalist, like my music – Helmut Lang, Jill Sander, and Prada. And if you look back at the ‘90s Plastikman photoshoots there’s likely some Prada in there.

ER: I love that there is more and more connection between fashion and music, and I mean real connection, not just admiring each other from afar.

RH: Well, creators are very sensitive people, right? Perhaps what you’re seeing now is the next generation that collaborate easily across different mediums. For an older generation that wasn’t really the norm at first, we were very protective of our craft. But creators who are now in their ‘40s or ‘50s, did open themselves up to this interdisciplinary, collaborative approach. Conversely, guys like Raf and Rick Owens have always been influenced by music.

For me quite often it’s really inspiring to see an interesting silhouette, and I think, “Fuck, that silhouette is like what I hear or see in my head when I’m thinking about music.” And fashion has done that for me as much as contemporary art. I’m a big fan of artists like Anish Kapoor, Dan Flavin, and Rothko. I used to, especially in the ‘90s, go to these shows and see a beautiful piece that gave me a physical way to understand what I’m trying to do with high-hats and beats.

ER: Today it’s hip-hop that’s considered the main conduit for fashion via music. Why do you think techno has lagged, even though it remains a popular music genre?

RH: Well, hip-hop is a very American phenomenon, especially so in its early days.  It came up through the early-era MTV, so it was always very visual and easy to commodify. Whereas electronic music and techno in particular, even though it’s not underground as it once was, it really stayed connected to the underground for a long time, and it remained a very sonic and not a visual medium. It has struggled to find its own visual identity. Even when in the ‘90s I started thinking about fashion and doing more photoshoots, some people were really against that idea. I have used F.U.S.E. and Circuit Breaker as monickers before finally stepping out as Plastikman or Richie Hawtin and having a visual identity.

But, even as we’ve stepped out of the shadows of the clubs, we’ve chosen this basic black uniform that as much as it says, it says nothing. But I think that’s changing with the new generation that I see coming up with a different take on the hard dance techno, they seem to be playing with a wider spectrum of looks. So, there’s a shift. And electronic music has over the last 10 or 15 years become more visual. So I think you’re going to see much more connectivity between techno and fashion going forward.

ER: We live in such a visual culture, it makes sense.

RH: Yes, social media is the main form of communication today. It used to be that we led with the music, so you heard the sound first and had to create the visual image in your head. Now the image is as strong, or even stronger, from the get-go. So now, as I’m working on a new Plastikman record, I need to think about both the sonic and the aesthetic presentation together.

ER: Which other designers would you like to collaborate with?

RH: I don’t want to sound like saying what’s expected of me, but I really hope to do the music when Raf does the men’s collection with Prada. Having seen them in dialogue, I have a feeling it will be a very interesting story. I’ve always, of course, been a huge fan of Rick Owens. What I kind of miss now is that influx of designers doing this deconstructed, drapey, black goth thing, but I feel like the plot has been lost on this. I would love to see something which has classic lines, but with an edge, a monochromatic, functional type of design that I connect to.

Most of my life is traveling and so I think both about how I look and how I can function in the clothes. And these are the questions at the heart of what minimalism is about. The best parts of Rick’s work are that, similar to what was going on with the ‘90s minimalism. I would love something like that, something to make me feel comfortable in representing where I’m going sonically.