About Time: Fashion and Duration at the Met Museum 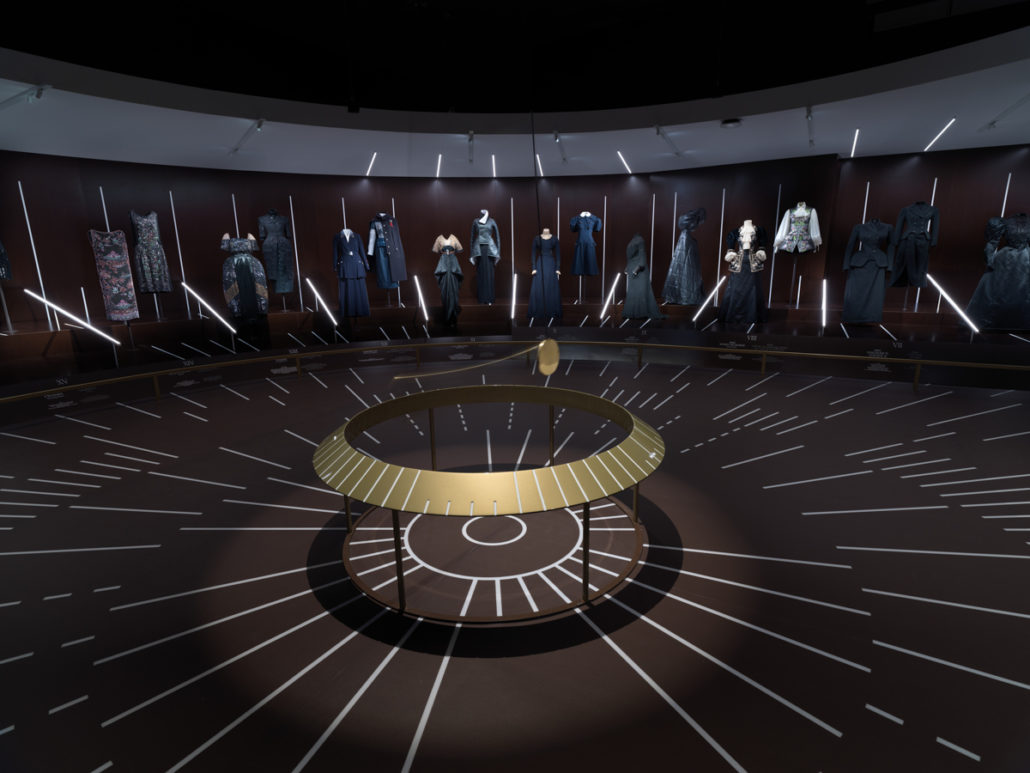 Gallery View, Clock One Image: © The Metropolitan Museum of Art

This year the Metropolitan Museum of Art in New York celebrates – as much as anything can be celebrated in 2020 – its 150th anniversary. As such, there are exhibits, like the excellent Making the Met, an overview of the museum’s treasures, that mark the anniversary. Not to be outdone by its often haughty art peers, The Costume Institute at the Met, often viewed with disdain (fashion in an art museum?! A scandal!) and envy (it brings in much needed money) by them, put on its own exhibit, consisting mostly of the clothes in its own impressive archive and organized around the theme of time. As in time that has passed since 1870 until now. Time is a perfectly delicious, sumptuous theme for any fashion curator to sink his or her teeth into, since fashion, if it’s about anything, is about time. Fashion is about newness, ephemerality; you can watch the passage of time through fashion (Or so the French poet Baudelaire, featured in the accompanying catalogue, declared in his famous essay the Painter of Modern Life). Andrew Bolton & Co could have had a field day with this one, but instead we got a trip to a local petting zoo.

The exhibit was… fine. Anyway, that is the word that kept popping into my head as I traversed its two rooms twice. In both rooms outfits were organized in pairs, each delineated by a minute, for a total of an hour. The first room – or the first half hour – was ordered in a fairly linear progression, juxtaposing historical womenswear (and it was all womenswear) with a contemporary one, highlighting similarity in silhouette and detail. That was kind of neat, at lest those times when you could see the clothes that were so dimly lit, giving the impression that each pair of outfits was out on a first date at a hotel bar. 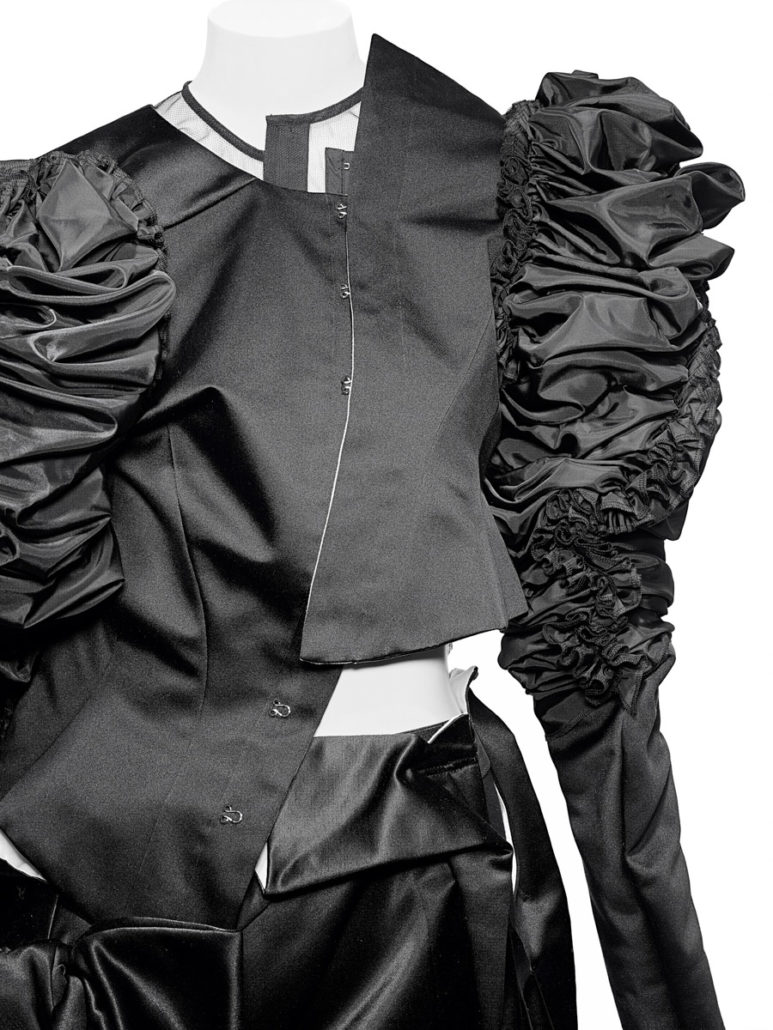 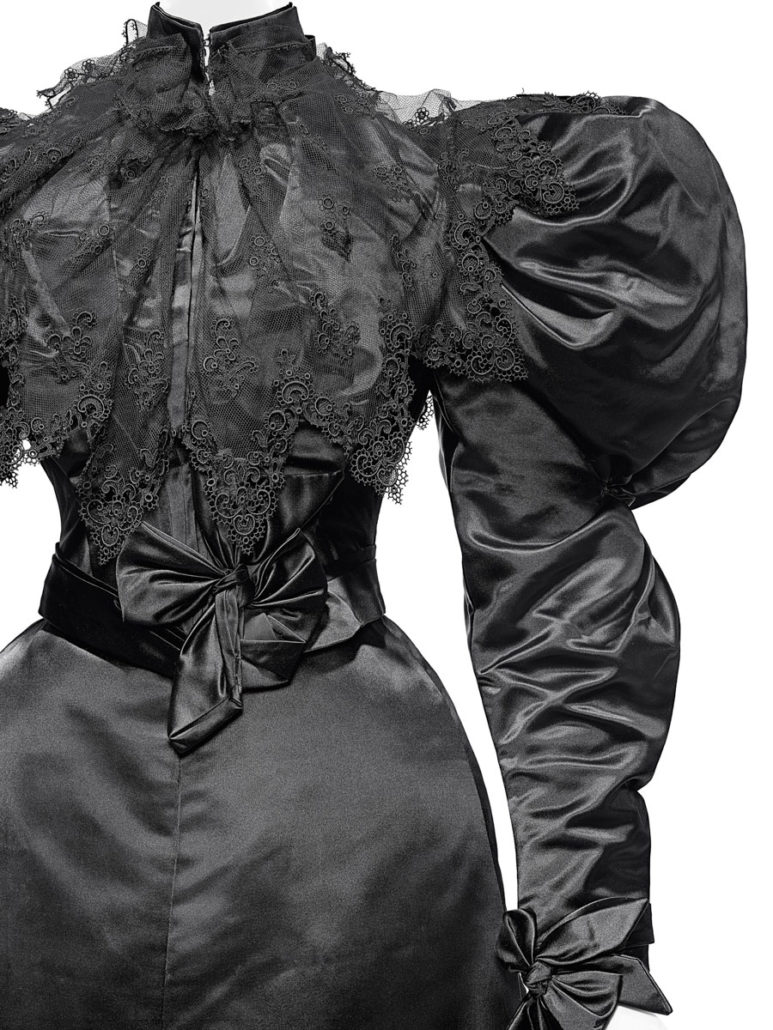 The clothes themselves were great, and it was fun to see the similarities, sometimes bordering on knock-off territory as was with a J.W. Anderson coat. One travesty should not go unnoticed – a 1927 Chanel ensemble of a pleated skirt, a simple top, and a leather belt that looked every bit as modern today as it was back then juxtaposed against a lame little black dress that said “LITTLE BLACK DRESS” on it by Off-White. I hope this was some kind of meta-irony, and not taking Abloh anymore seriously than he deserves. Because it certainly highlighted what a master Chanel was and what a dilettante Abloh is. On the plus side there was the iconic Yohji Yamamoto dress with a back bustle, the red version of which has been immortalized by Nick Knight, and a genius quilted dress (think puffer jacket turned into an evening gown) by Junya Watanabe from F/W 2004.

The decoration of the room was kept to a minimum via a swinging pendulum in its middle that measured time. It was neat, but it made me think of the pendulum with a sharp edge that marked the minutes until the protagonist’s death by the said pendulum in Edgar Allan Poe’s story “The Pendulum and the Pit.” The one in the story was way cooler. The trouble with the Costume Institute’s exhibitions of the past couple of years, for those of us who have seen the magnificence of the shows from the years before, is that you can tell that the museum is operating under a budget deficit. It’s a shame, since the clothes often do require a fitting setting to make them shine. 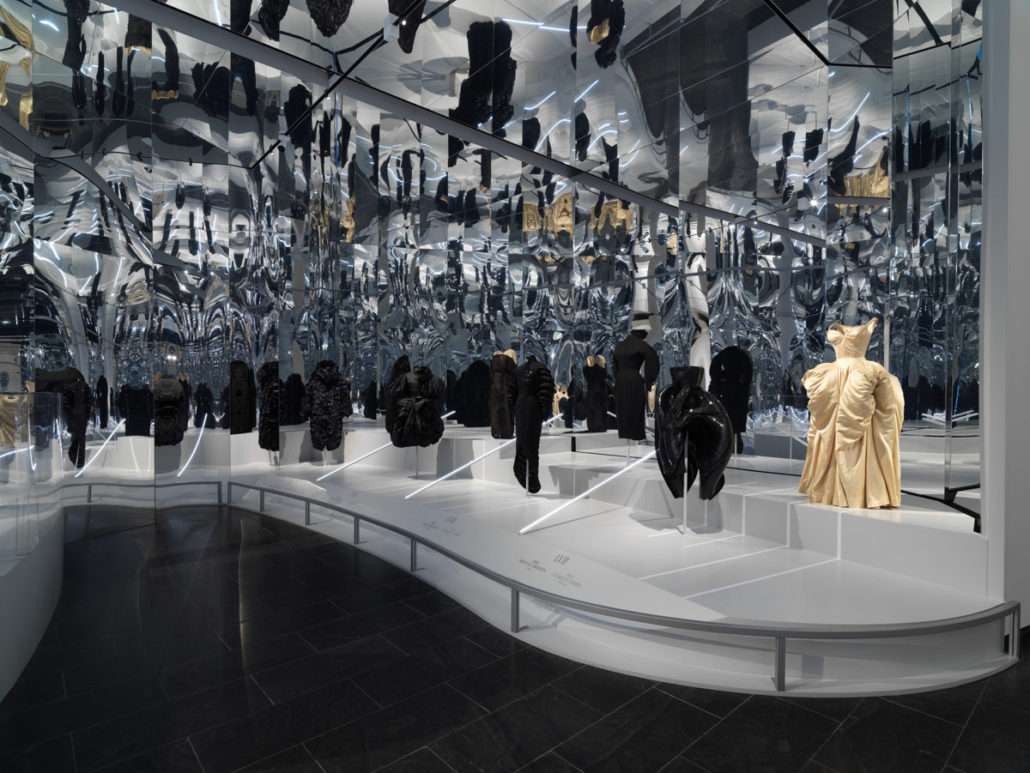 After making the roundabout of the first room, one passed through a corridor (Why not a looking glass? What a miss.) to room number two, which was better lit and full of mirrors to boot. That room was all about disruption – the word I no longer want to hear, ever – of time. I am not sure how that worked in the outfits, except that they were no longer divided by a century or so. Perhaps the mirrors were supposed to signify time distortion or bending onto itself as in some version of a Christopher Nolan film. In any case, the clothes were great – especially the pair that featured a 1974 ensemble of a bondage shirt and trousers from Vivienne Westwood and Malcolm McLaren that I would totally wear today, paired with a parachute skirt and top from one of my favorite Junya Watanabe collections (S/S 2003). There were also two outfits from Noir by Kei Ninomiya, the latest prodigy of the Comme des Garcons universe, and the absolute killer of a look from Undercover’s 2006 But Beautiful V (Guru Guru) show that cemented Takahashi’s reputation as one of the most talented designers on earth. There was also that Versace pin dress that seems to be in every Costume Institute show of the past several years, and an Iris van Herpen dress made from layers of film.

Pretty much all of the clothes on display were black (notwithstanding the white look by Viktor & Rolf that farewelled you as you exited the exhibit, perhaps to signify hope and purity of the year of our Lord 2020). So, you are not going to hear a lot of complaining from me for getting a chance to look at a bunch of great black clothes. Like I said, the exhibit was… fine.