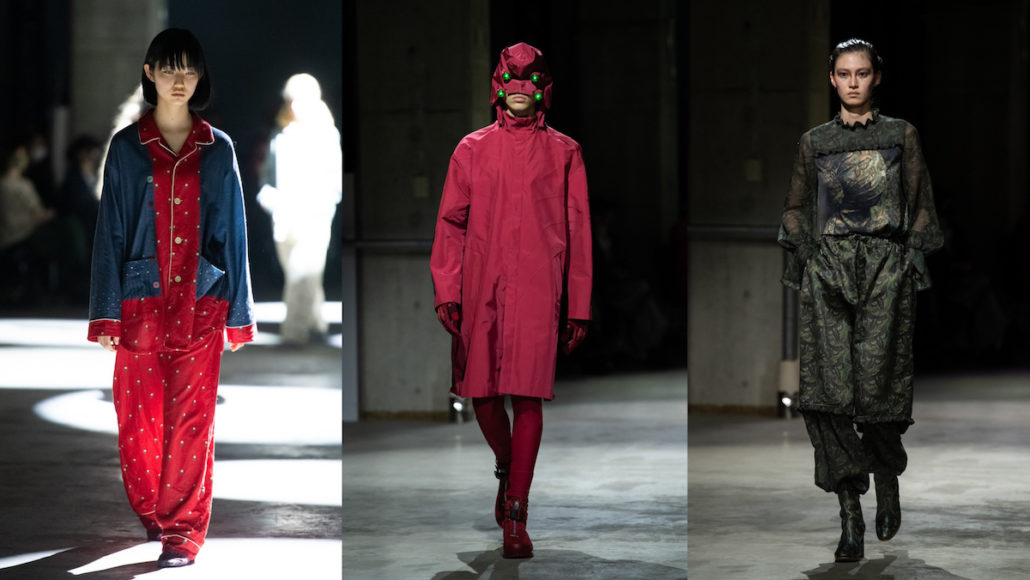 Last week Jun Takahashi presented his new collection, titled “CREEP VERY” for Undercover via a live show in Tokyo. It was a co-ed presentation, with the men’s section themed around the cult Japanese anime Evangelion, the final installment of which recently came out in Japan. There were puffer jackets that resembled the different Evas – machines that do battle on behalf of humanity and are piloted by teenagers – and technical outerwear with graphics done in phosphorescent paint that provided a striking and slightly unsettling glow-in-the-dark effect.

Meanwhile, the women’s collection highlighted the work of the Swedish painter Markus Akesson in continuity with the main menswear collection Undercover presented in January. There were a lot of hybrid items, in the women’s show especially, that, according to Takahashi, are a sartorial representation of mixed emotions we all feel.

The mixing of emotions, the simultaneous lightness and the darkness of the soul, has always been central to Takahashi’s ethos. He has deftly shown this again and again, from the graphics of Undercover’s t-shirts to the most ingenious design experiments bordering on couture. This time even though on the surface the clothes were ostensibly different in the men’s and the women’s parts of the show, the underlying tension was evident on both, and it’s these deeper connections that fuel Undercover.

As usual, Takahashi worked on the show with friends. In this case these were Thom Yorke, who remixed Radiohead’s first hit, “Creep,” specifically for the women’s part of the show, and the Japanese electronic musician and DJ MARS89, who remixed a theme from Evangelion. Yorke’s contribution was especially remarkable, since he is notoriously ambivalent about “Creep.”

We caught up with Takahashi via email to discuss the show.

I am a fan of the Evangelion series. It’s a story of Shinji Ikari’s [the main character] conflict and growth. I was touched by Shinji’s mixed feelings, and very impressed by how Shinji saw a ray of light in his future although he is living the life full of distress and anxiety.

Evangelion is a very unique anime that isn’t for everyone. Although a variety of generations including people of my age and younger who followed the series have been influenced by it. Especially someone like myself, who has had a warped mind since childhood, can relate to Shinji a lot. I see the same kinds of conflicts [that Evangelion explores] in people’s minds.

The underlying theme for the collection is conflict and anxiety, growth and light of hope you eventually find. There is a link between Shinji Ikari’s conflict and what people are going through right now. I’m feeling the same and I expressed the feeling in both men’s and women’s designs.

I wanted to interpret the world of Evangelion through my filter and make it into design. I wasn’t aware of the timing of the movie release, but I did see the latest movie “Evangelion: 3.0+1.0 THRICE UPON A TIME” and watched how it [the series] grew and ended.

On doing a live show

In a show models move around with clothes and make-up on. There is season-themed music and professional direction. The live show is an important opportunity for me to express my worldview, so yes, I am happy to be able to do that.

It was very difficult to think both designs [for men and women] simultaneously, as the men’s and women’s making process isn’t the same. I designed men’s first and then women’s. Staging for the live show wasn’t a difficult job because the fundamental theme for both was the same.

There were a number of hurdles to pass [in the making of this show], for example limiting the number of people in the venue, change the stage setting, etc. But I think holding a live show is possible if you pay careful attention to its execution.

On the show’s music

“CREEP” was the first song that came into my mind when I was selecting music for the women’s show. This song describes my present state of mind, but the song contains strong guitar riffs and is too loud for the show. I asked Thom Yorke if he ever recorded an acoustic version and he told me that he has one. Still, I thought it was too strong for the show. I told him that and he said slow it down 50% and listen again. Then he told me that he will do a remix. Only about half a day later, he sent me a remix of “CREEP” with additional synthesizer and other effects. I put on a headphone and listened to the song in full volume. The remix was mind blowing and so touching that it made me cry. I couldn’t stop crying. I felt this remix of “CREEP” is a different song and this fits perfectly to my show. I came up with an idea that I ask Thom to give a title for this new tune and the title sent to me was “CREEP VERY.”

MARS89 is a friend, and I asked him to make a remix of “Sakura Nagashi” by Hikaru Utada, the theme song of the movie “Evangelion: 3.0 YOU CAN (NOT) REDO.”. I worked with MARS89 for the first time two years ago for my men’s show “DROOGS”. I liked his works even before that, so I had a feeling that he would do the perfect job this time as well. I think MARS89’s dark ambient world and melancholic world of the original song came to a great accordance in this remix.