Op-Ed: Fed Up With Fashion? Try This. 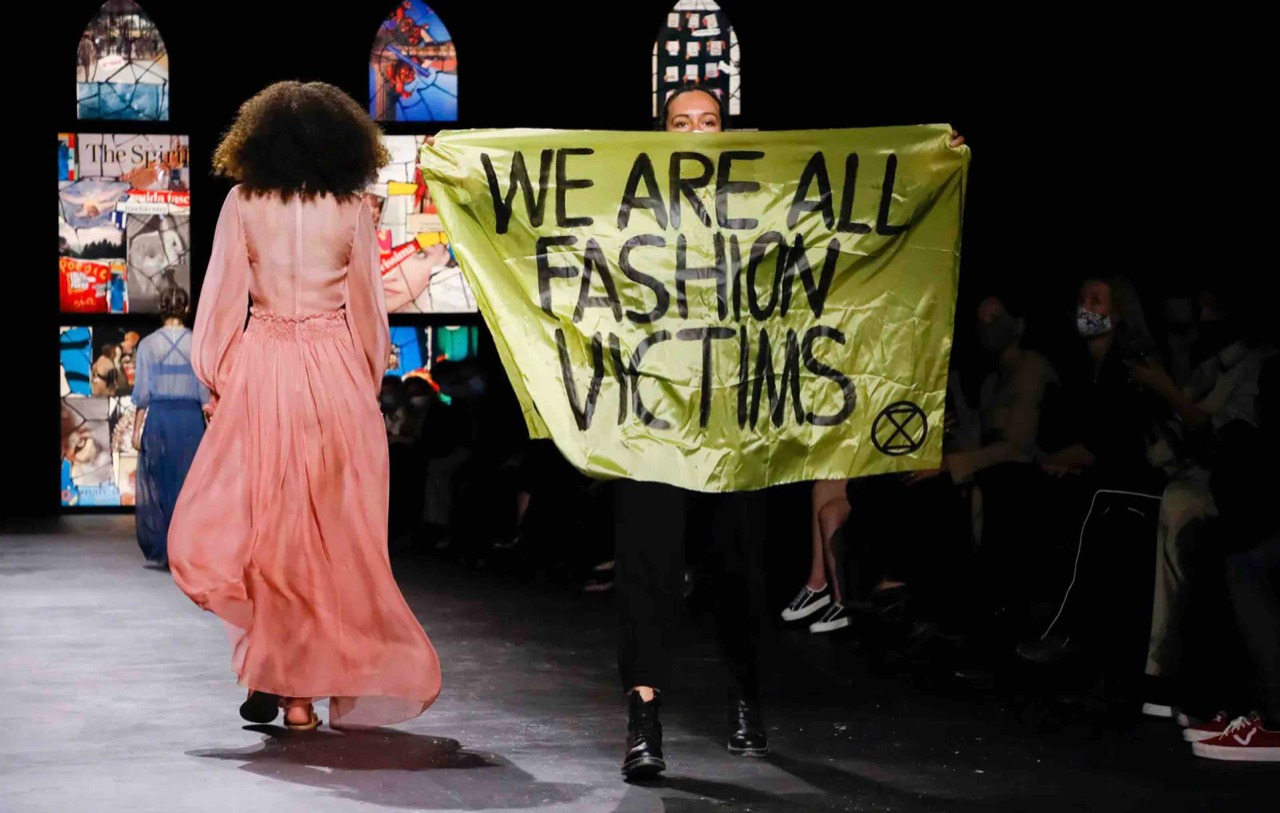 “The real issue is that in the fashion business, it’s almost against the law to tell the truth, and anyone who steps behind the silk curtain to show how raw the business is can expect a rough time. Designers go to grotesque lengths to exaggerate their concepts to the press. And the press is just as guilty when it swallows the bait and spews forth huge headlines. The self-importance of our profession is appalling.”

So wrote John Fairchild in his 1989 biography, Chic Savages (quoted in Teri Agins’s book, The End of Fashion). Fairchild being the publisher and editor-in-chief of the Women’s Wear Daily for decades, I see no reason not to believe him. Another reason not to believe him is that over the past ten years I have increasingly come to feel the same. I grew up at the end of the golden era of contemporary fashion in terms of aesthetic expression and the sheer free-for-all explosion of creativity. It came from many sides – from the theater of London’s Alexander McQueen and John Galliano, from the Teutonic minimalism of Helmut Lang and Jil Sander, from Ann Demeulemeester and Dries Van Noten of the Antwerp Six, from Raf Simons and Olivier Theyskens of the second Belgian wave, from the youth culture explorations of Tokyo’s Undercover and Number (N)ine, from the cerebral minds of Hussein Chalayan and Martin Margiela, from the unconventionality of Comme des Garcons and Yohji Yamamoto, and from the artisanal, anti-fashion stance of Carpe Diem and Carol Christian Poell. Fashion made me think and feel. Today, not so much.

Between the corporatization of fashion on the one hand and the erasure of standards amongst the consumer on the other, we’ve ended up with an impoverished discipline whose blandness has become so commonplace that it rarely fails to shock anymore. On a recent visit to a New York department store I examined the merch from corporate brands and though that it was just that – merch. The clothes were essentially the same, just with different logos on it. And the prices that the brands are trying to charge for them are laughable.

Today, I get my fashion uninspiration from many sources – from the catwalk, from presentations, from marketing campaigns, from the fashion media. With each year, I feel like I’m losing interest as are quite a few others I know.

The worse the clothes, the more window-dressing they require in terms of marketing, advertising, PR, self-important influencers and vapid celebrities, and the oohing-and-wowing on the part of my for-sale colleagues in the fashion media. The media no longer even hide the fact that they are for sale. And of course, the more window dressing, the more fakery. And since fakery requires tremendous amounts of energy, we should not be surprised at the level of general bitchiness and pettiness that goes on in this industry. Narcissism and self-importance are fashion’s bread and butter.

I’ve always been a champion of fashion. I’ve come to its defense on many occasions. I’ve gone to great pains to point out to those with a facile view of it the meaning, the artistry, the craft, the pushing of the boundaries, the flight of fantasy that I find so alluring. I view my job as a critic as being in the service of fashion. I critique it because I want it to be better. But fashion today is becoming very hard to defend, and I don’t want my criticism to devolve into cynicism.

To be sure, not all is bad. I have my favorites – Rick Owens, Undercover, TAKAHIROMIYASHITATheSoloist, Noir by Kei Ninomiya, Junya Watanabe, Sacai, Craig Green, and a few more. As you can see they are mostly Japanese and all are independent. They are still killing it, still making brilliant clothes. There is even some excitement from the corporates like Bottega Veneta and Loewe. And there are worthy newcomers like Nensi Dojaka. But overall, my level of excitement has flatlined. I am not alone. Even the young kids I talk to – who are supposed to get easily excited about things – realize that they have missed out on the golden era of fashion. Just witness the proliferation of archival accounts on Instagram.

What is to be done, you might ask? I may have a partial answer, at least when it comes to mens fashion. Menswear can be roughly divided into design-driven and product-driven parts. Think of design-driven as your catwalk designer fashion brands, and product-driven as those that are not concerned with innovation in cut and silhouette, but with turning out the best possible versions of existing archetypes. Increasingly, I’d say in the past seven years, I’ve been turning to brands that are product-driven, or as I classify them as “just guys doing cool shit.” By this I mean brands that produce cool, quality, relatively humanely priced clothes. I’m talking Japanese denim like Sugar Cane, Pure Blue, and Studio d’Artisan, universe-forming (and also Japanese) cult brands like Neighborhood and Kapital, and techwear like Stone Island, Acronym, and Arc’teryx Veilance. Now, this does not mean that I will be throwing out all my Rick Owens any time soon, but that I have been shifting my interest in this direction. This field is not only rich but incredibly refreshing in its unpretentiousness. The people who work in it care about garment, not image.

Unpretentiousness, something fashion should but will never learn. How could it? The entire industry is predicated on whipping up emotional hysteria and anxiety by making people feel that they are lacking. Every time I go into a luxury monobrand boutique, I kind of want to throw up on the way out. The relentless pressure to sell, the quiet sizing-up, and the little bitchy power trips to throw a veneer over the salespeople’s insecurities would put anyone off. Last time I went to Dior in SoHo (and by “last” I also mean that I will never go again, because why?) a salesman asked me I’ve ever been to Dior. “This particular one?” I asked. “No, in general.”

On the contrary, every time I walk into a shop like Snow Peak or Nanamica or Stone Island or Self-Edge, I feel welcomed and pressure-free. The salespeople are knowledgable and passionate about what they sell without actually selling you anything. The product is supposed to sell itself. And it does. Because nine times out of ten it is of higher quality and lower price than your average dumb Balenciaga hoodie that costs the company ten bucks to make and that it sells to you for 100 times that. I already know that my next pair of jeans will come from Self-Edge or will be bought on my next trip to Japan. Why would I spend $600 on some lycra-infused, low-grade denim designer jeans when I can have a pair made of Japanese selvage with incredible texture and the shade of black deeper than a black hole for half the price? Two years ago, also at Self-Edge, I bought a Buzz Rickson x William Gibson reproduction of an MA-1 bomber that in terms of quality of material, construction and details blows your shitty Prada nylon out of the water and costs 2.5 times less. My last denim jacket was bought on a whim at Blue in Green, another purveyor of Japanese denim. It was just too damn good in quality of the material and construction to pass up.

And it’s not like there is no design in this sphere. It’s just concentrated on product instead of story-telling. There is more design in a Stone Island or an Acronym jacket than in most of what fashion designers offer today. I was not surprised when Matthieu Blazy, the new designer for Bottega Veneta showed up to his Business of Fashion interview with Tim Blanks dressed head to toe in Stone Island. He knows. And the most exciting collaboration of the last however many years is Sacai x Acronym. The complexity of the clothes are beyond anything I have seen your average design house produce, and Sacai is no slouch when it comes to complexity.

So, if like me, you are getting sick of fashion, have no fear. There are other things worth getting excited about. And they don’t come with the smoke-and-mirrors and fuss of fashion. It’s a breath of fresh air, really.