In America: An Anthology of Fashion at the Met Museum 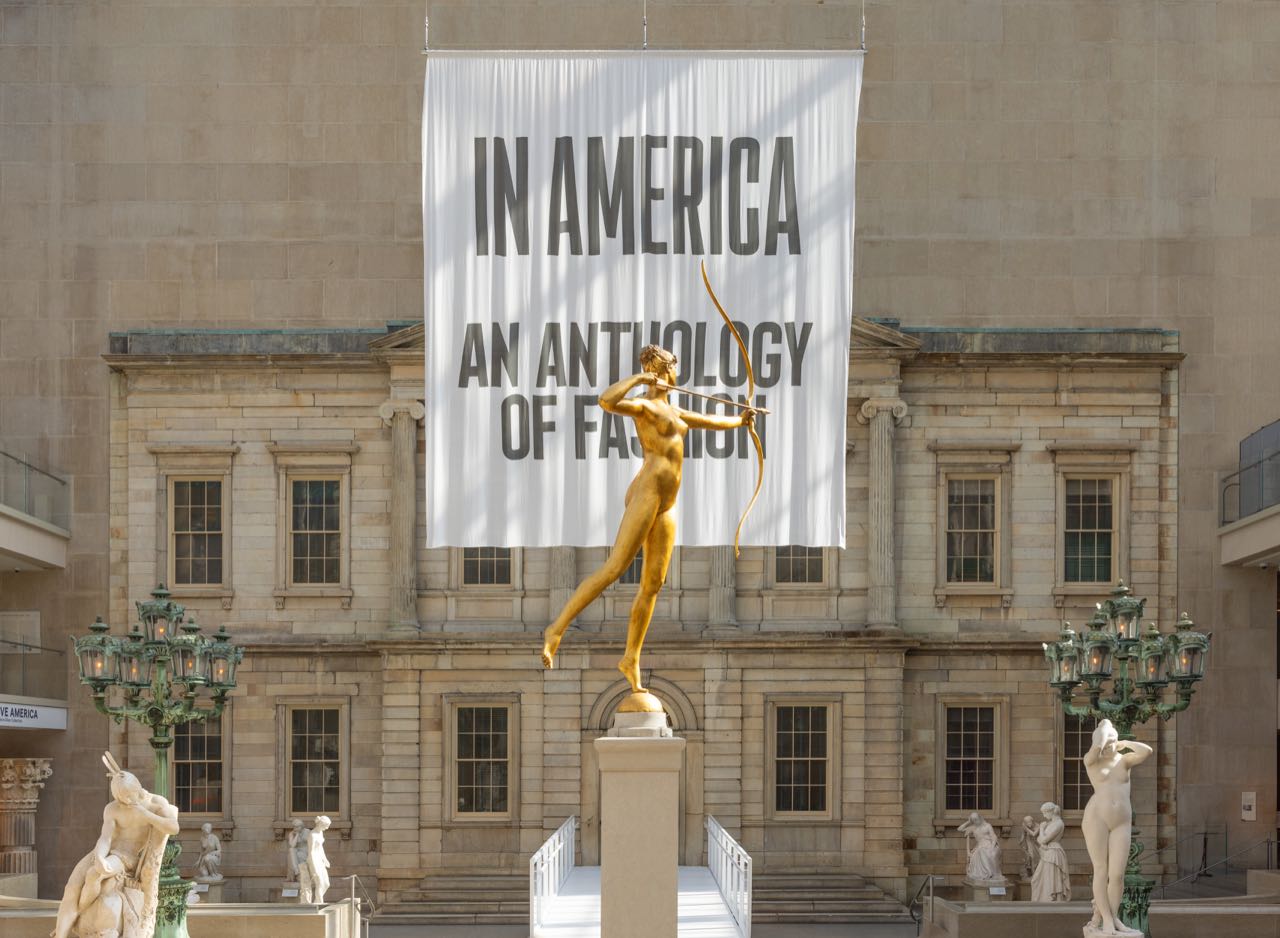 The paramount question, perhaps the only question that can be put to any work of art, or any exhibit of works of art, is whether it succeeds or fails. It is hard to answer that question with regards to the new exhibit by the Costume Institute at the Metropolitan Museum of Art in New York, titled In America: An Anthology of Fashion. The reason for this ambivalence lies in defining what fashion is, and since there is no more agreed upon definition, the answer is largely left to the viewer, and thus you will get a review of this particular viewer guided by his particular definition.

And for this viewer In America: An Anthology of Fashion for the most part shows not fashion but costume. Costume, as opposed to fashion, is basically clothes that predate our current notions of fashion, which I would roughly put in a post World War II time period (debatable, I admit, but so is everything else). Costume is historical, and does not speak to contemporary cultural, economic, and socio-political realities, whereas fashion does. It tells us nothing about the world we live in. And since I am mostly interested in the world I live in, I don’t find looking at costume particularly rewarding. But if you do find costume compelling, you are in for a treat, as there are plenty of historic garments on display, including a Brooks Brothers frock that Abraham Lincoln wore when he got assassinated – you can admire its cut or you can dwell on moral implications of voyeurism – both are valid subjects to ponder.

The most interesting part of the exhibit may not the clothes but their mis en scéne. Anthology takes over the American Wing period rooms, juxtaposing the outfits against their interiors. This makes total sense, and is probably smart not only for the Costume Institute but also for the Met in general, because it gets the visitor to the American Wing in the first place. The settings become, according to the Met press release, “cinematic vignettes created by eight celebrated film directors.” Of these, two stand out the most – the Versailles hall by Tom Ford and the Frank Lloyd Wright living room by Martin Scorsese. 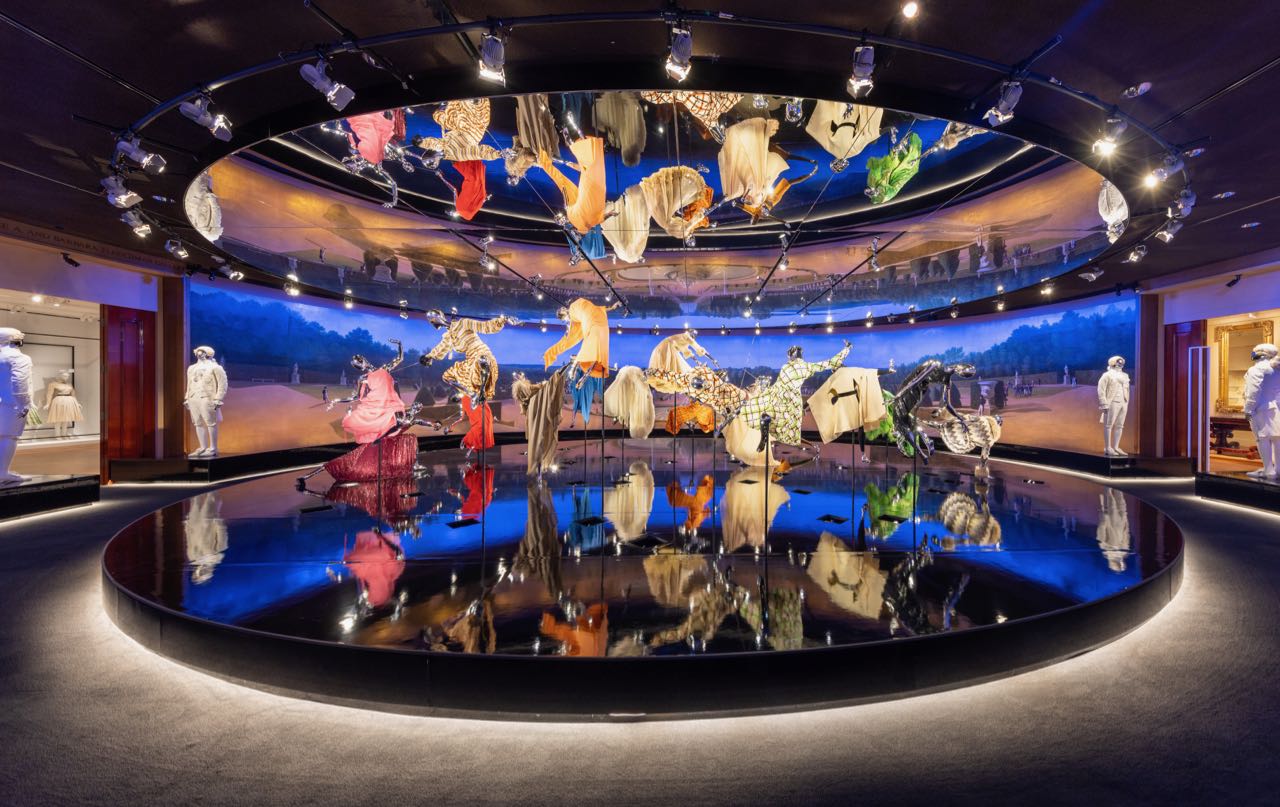 The Versailles hall, which features a panoramic 1819 mural of Versailles is the most fun and also the only place that shows fashion as defined above. There, Ford revisited the infamous Battle of Versailles, a co-ed French-American fashion show that took place in 1973 in order to raise money for the palace’s restoration and that “pitted” the likes of Yves Saint-Laurent and Halston and Hubert de Givenchy and Oscar de la Renta. The blue-lit room with mirrored floor and ceiling and mannequins frozen mid-flight in fencing duos set to a dynamic soundtrack gives the room a fabulously kinetic feel that’s exacerbated all the more by the way it springs upon you as you pass through the narrow doors to see it. It is jarringly different from everything else you will see – the only bit of contemporary dynamism of our world thrown into the staid mix of history that is the rest of the exhibit, but it works.

So it is with the Prairie Style Frank Lloyd Wright living room in which a slew of mannequins pretend to have a cocktail party wearing Charles James gowns, a fitting finale for the exhibit and a fitting setting for the now reclaimed great American couturier. 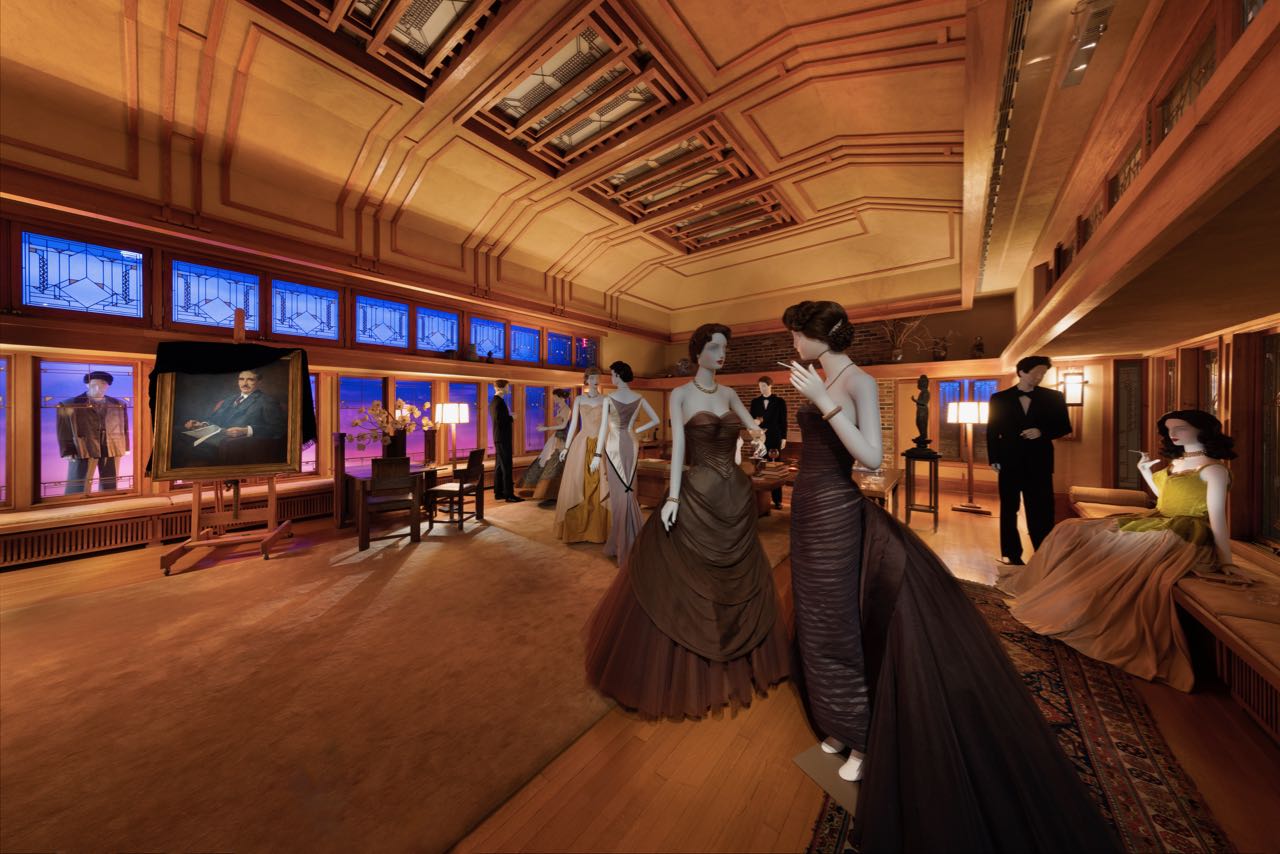 As for the rest of the exhibit, it is not especially memorable in terms of the clothes, but is in terms of its setting. Upon further reflection, the production value, the Versailles room excepting, does not seem that high. The Costume Institute is on a tight budget, the Gala fund-raising and all, as is the entire Met Museum that is sorely strapped for cash. This is unsurprising, since Covid has damaged the viewership significantly, greatly exacerbated by the fact that we haven’t allowed Europeans to visit until half a year after they let the Americans tourists in. By and large America has never quite grasped the fact that art is the cornerstone of civilization – Americans, in all their Puritan pragmatism have extolled business into the leading role – and that it needs governmental support. And so the Met must suffer and beg the private interests as do most other American cultural institutions. The results are obvious.

Still, by working the clothes into the American Wing interiors In America: An Anthology of Fashion serves as an excellent reminder that you are in a museum after all, with its historical artifacts on view for the public. And the whole thing is entirely Instagrammable, which is why many people go to museums today anyway. It may not be lost on many that this exhibit was sponsored by Instagram.