William Klein “YES” at the International Center of Photography 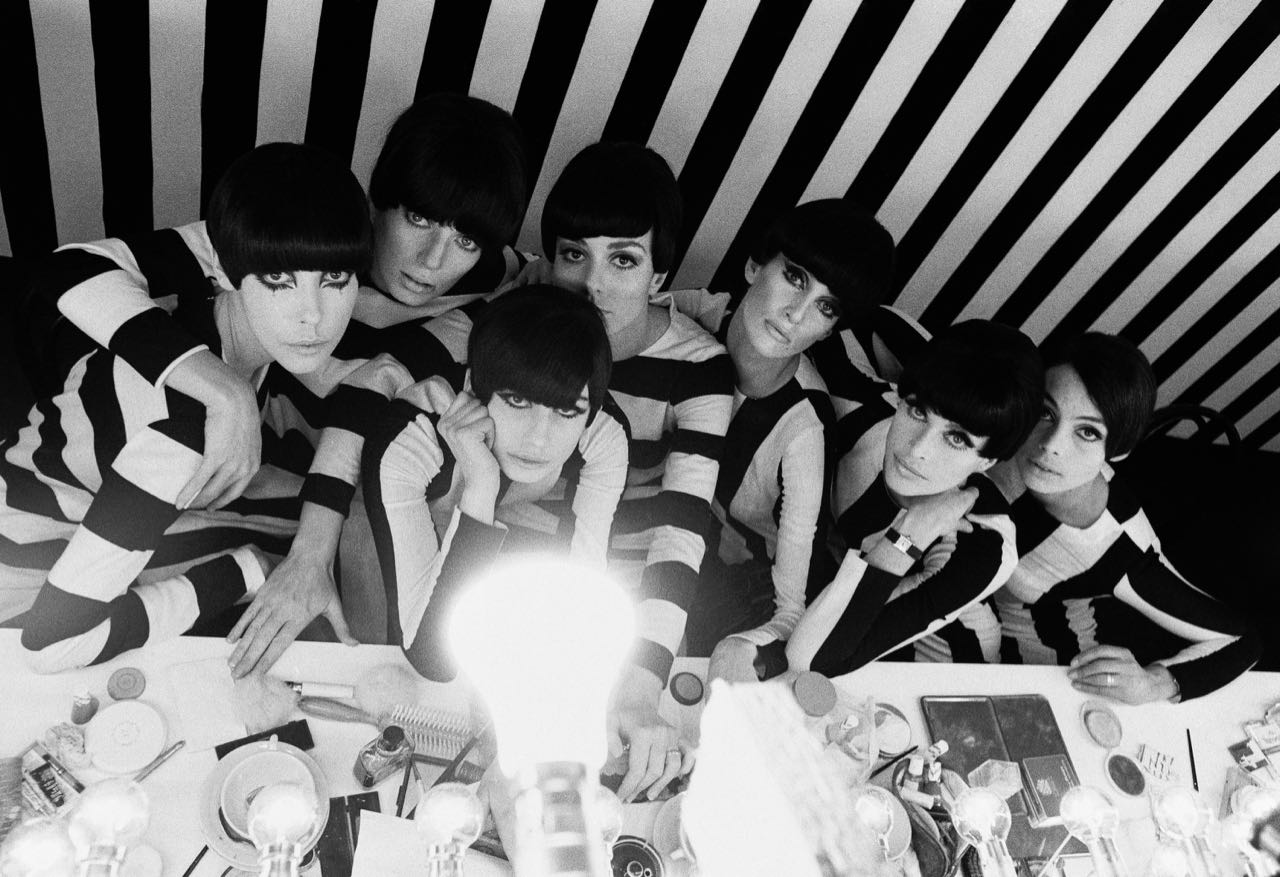 The new William Klein exhibit at the International Center of Photography in New York is called simply, “YES.” Why the affirmative title is unclear, except that, yes, you should go see this overall excellent show of one of the main figures of contemporary photography.

This was my first visit to the ICP’s new location, which moved down to the Lower East Side just before the pandemic hit pause on all in-person viewing and relegated us to the faux world of virtual exhibits (a ridiculous proposition if you have really thought about what it means to look at art). The two-floor space accommodates three hundred of Klein’s works organized by chapters into a fairly straightforward, mostly chronological arrangement. Three hundred seems like a lot, but given Klein’s prodigious output it actually leaves you wanting more, as each chapter feels like an appetizer and not an entree.

The chapters allow for a clear delineation since Klein has worked so much in different cities of the world for limited periods of time. Of these chapters, my favorites remain his early New York street images taken in 1955 and those taken in Tokyo in 1964. There is also an excellent chapter on Moscow, also shot in 1964, and a good chapter on Rome (1959), with a funny anecdote to go with it. Klein ended up in Rome at the invitation of none other than the great film director Federico Fellini, who asked Klein to be his assistant director. As Klein tells it, once he arrived, he realized that Fellini has about eight of those, and so instead of wasting time on the film lot, he grabbed his camera and roamed Rome, with far better results.

The New York chapter perhaps remains the most powerful and contains the most powerful of Klein’s images, Gun 1 (sadly it was not available for us to show here). It’s a photograph of two boys, one of them holding a toy gun, grimacing menacingly into the camera. In this grimace a malice, childish and adult, natural and learned, coalesces into an unsettling moment that makes you feel uncomfortable. 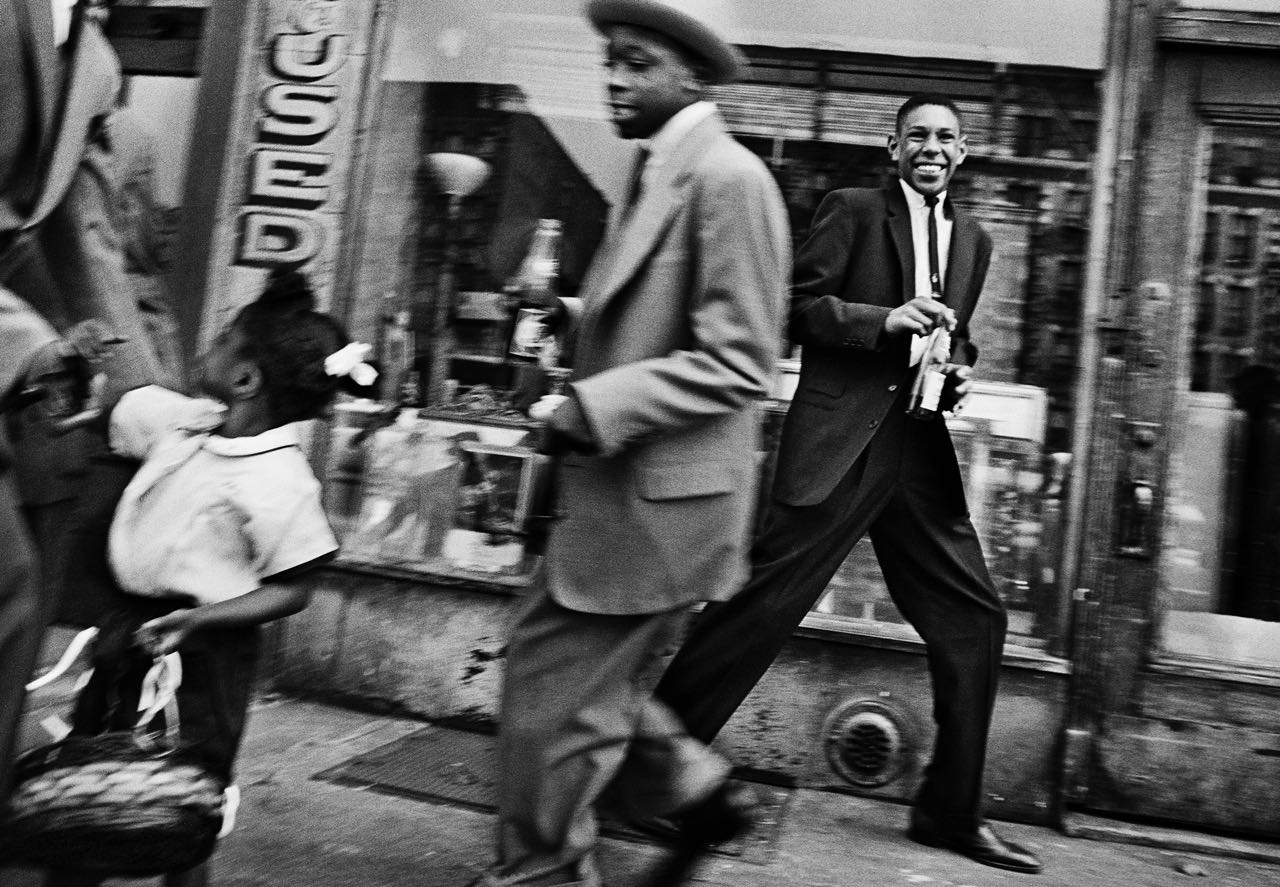 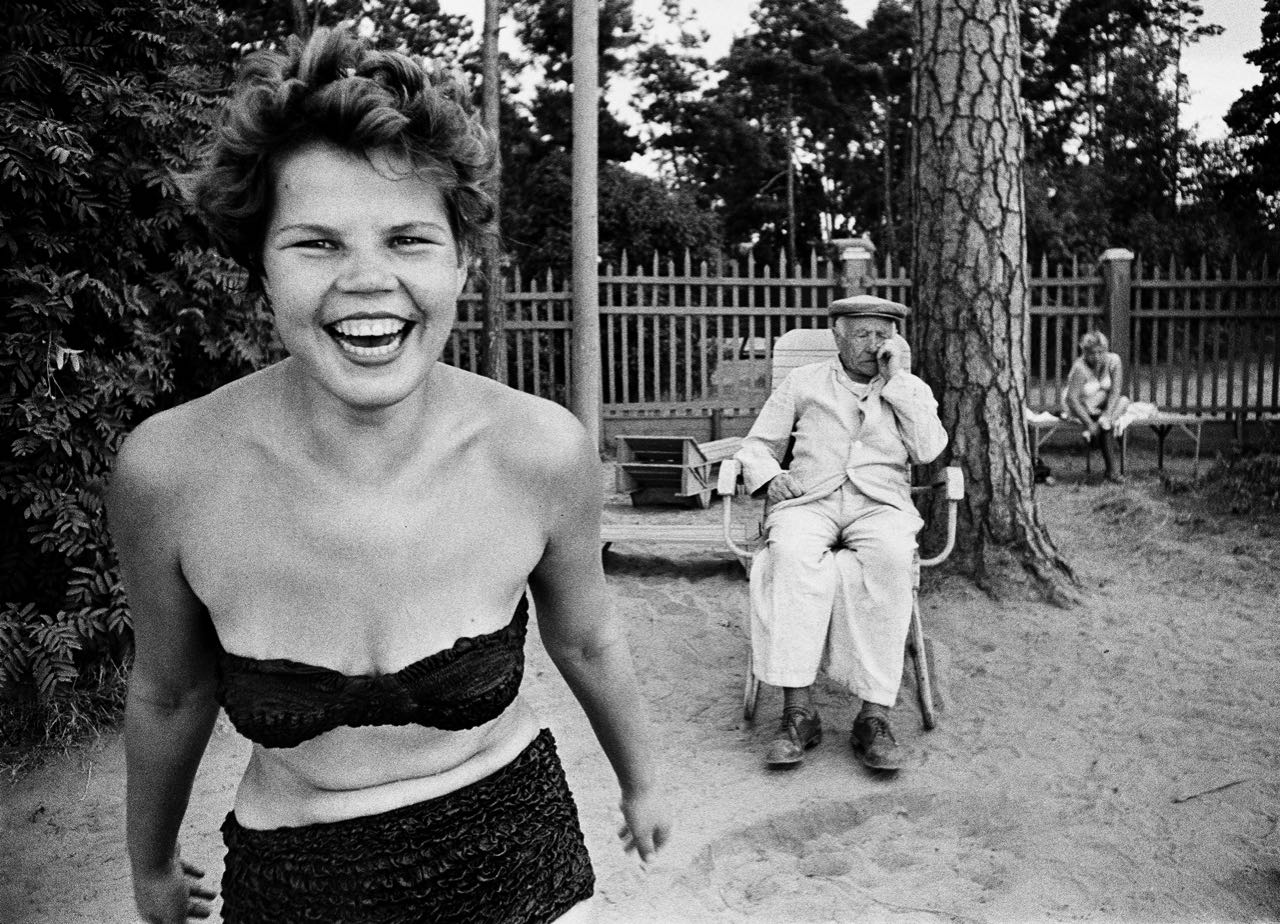 If art is supposed to make you feel uncomfortable, Klein’s fashion pictures hardly qualify as art. But then again, Klein has never made qualms about fashion photography. For him it was just a job, one he fell into when the legendary Vogue art director Alexander Liberman hired him – why, I suspect Klein never really understood – and he has cast a cool eye on the inordinate amount of pretentiousness that surrounded it, which Klein sent up in his infamous 1966 film “Where Are You, Polly Maggoo?” His fashion pictures, at least the ones selected for this exhibit, remain quite commercial and hardly moving, despite his best attempts to play within the parameters dictated by the world of glossy magazines. Think of it as David Campany, the exhibit’s curator, did, as a chapter. The contrast is especially jarring as the fashion chapter is followed by that of Moscow and Tokyo, where you can see the kinetic energy of emotion that Klein is so good at capturing, as opposed to the static aloofness, even in mid-stride, of his fashion models.

That’s all for the first floor. The second floor is mostly dedicated to Klein’s film work, of which the most famous is the previously mentioned Maggoo, and also his documentary on Mohammad Ali. I’ve never been impressed by museum exhibits that deal with films, and never quite understood their point – far better to simply watch the films themselves – and I had the same reaction to this part of the exhibit. But films were an important part of Klein’s oeuvre, and I understand the impulse and the impossibility of avoiding it.

The parting gift, as you exit the show, is the last small chapter of Klein’s career in which he began to paint over his photographs. These are simple red marks that first came about as he was choosing the negatives for printing, but there is something about them that works, a reflection on decision-making, on choice, on editing, on highlighting. Any editor will be familiar with the process, and one can only imagine the amount of editing that Klein has had to make over his illustrious career. 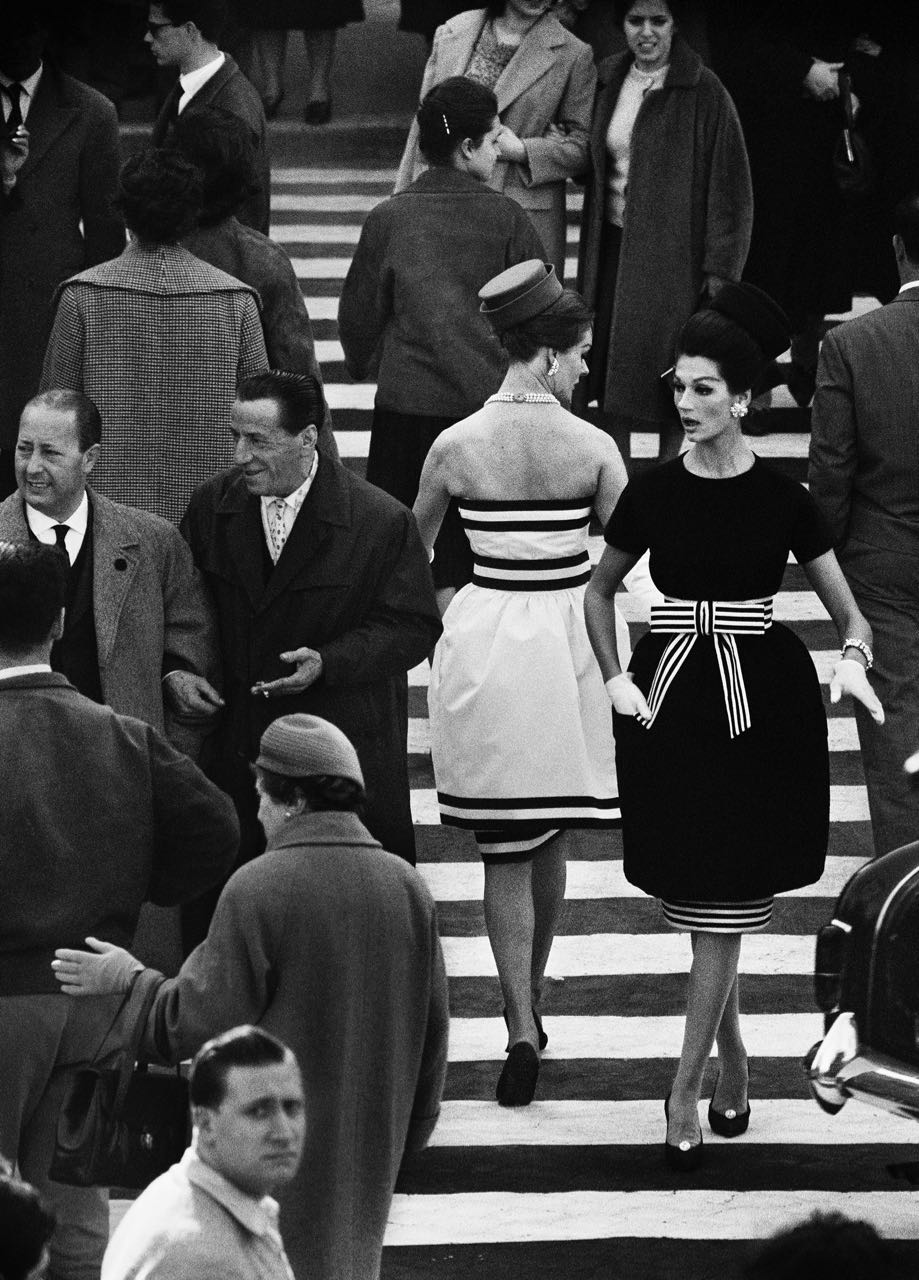 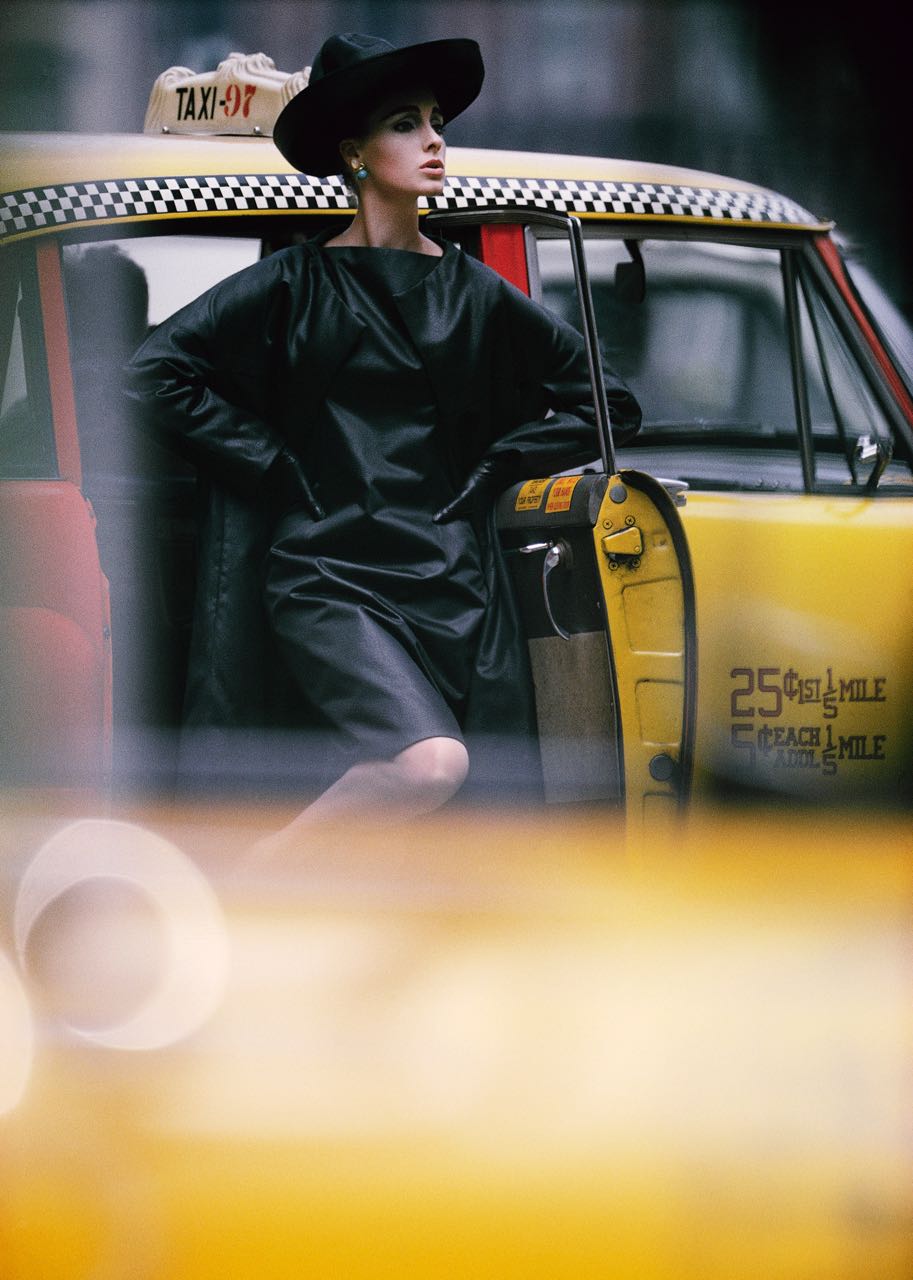 William Klein: YES, now through Sep 12, 2022 at the International Center of Photography in New York