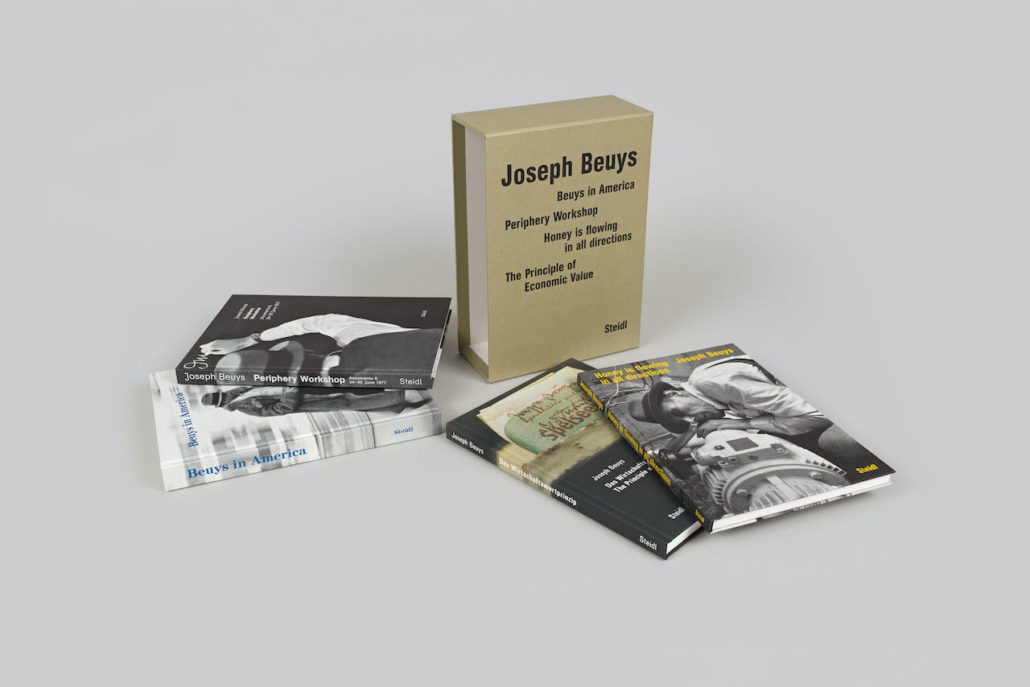 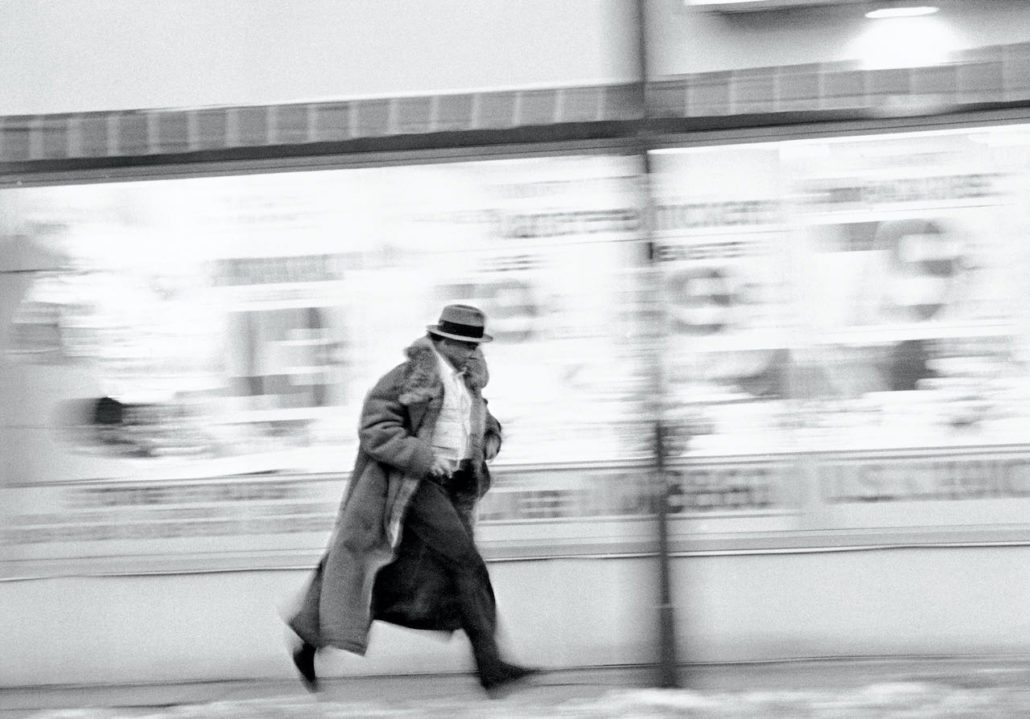 The book is also important because its publisher, Gerhard Steidl, was a Beuys disciple. As a matter of fact, Steidl considers Beuys his mentor. Throughout his multi-decade tenure, and an 18-year-long collaboration with Beuys, Steidl has published many books relating to the artist, of which this is surely not the last.

As to its contents, the four books document various projects of Beuys. The first volume – Beuys in America – follows the artist on his first trip to the U.S., on which he was accompanied by Steidl and by the graphic artist Klaus Staeck, the book’s co-editor and another long-time Beuys collaborator. The American art scene has repeatedly asked Beuys to exhibit his art in the U.S., and he has repeatedly refused. Finally, after years of hesitation, in January 1974 Beuys visited the land of ruthless capitalism, a system he detested, but not with an art exhibit. He wanted to come to America carrying nothing of monetary value – there would be no artwork for the gallerists to sell – but with something of cultural and political value, namely a series of lectures that would start at my alma mater, The New School. “Beuys is the strongest example yet of the artist as activist – and the activist as artist,” a Newsweek article rightfully noted. Beuys called himself a social sculptor, and he lectured on the need for a new societal order, one based not on greed, but on art and community achieved through political and economic action. 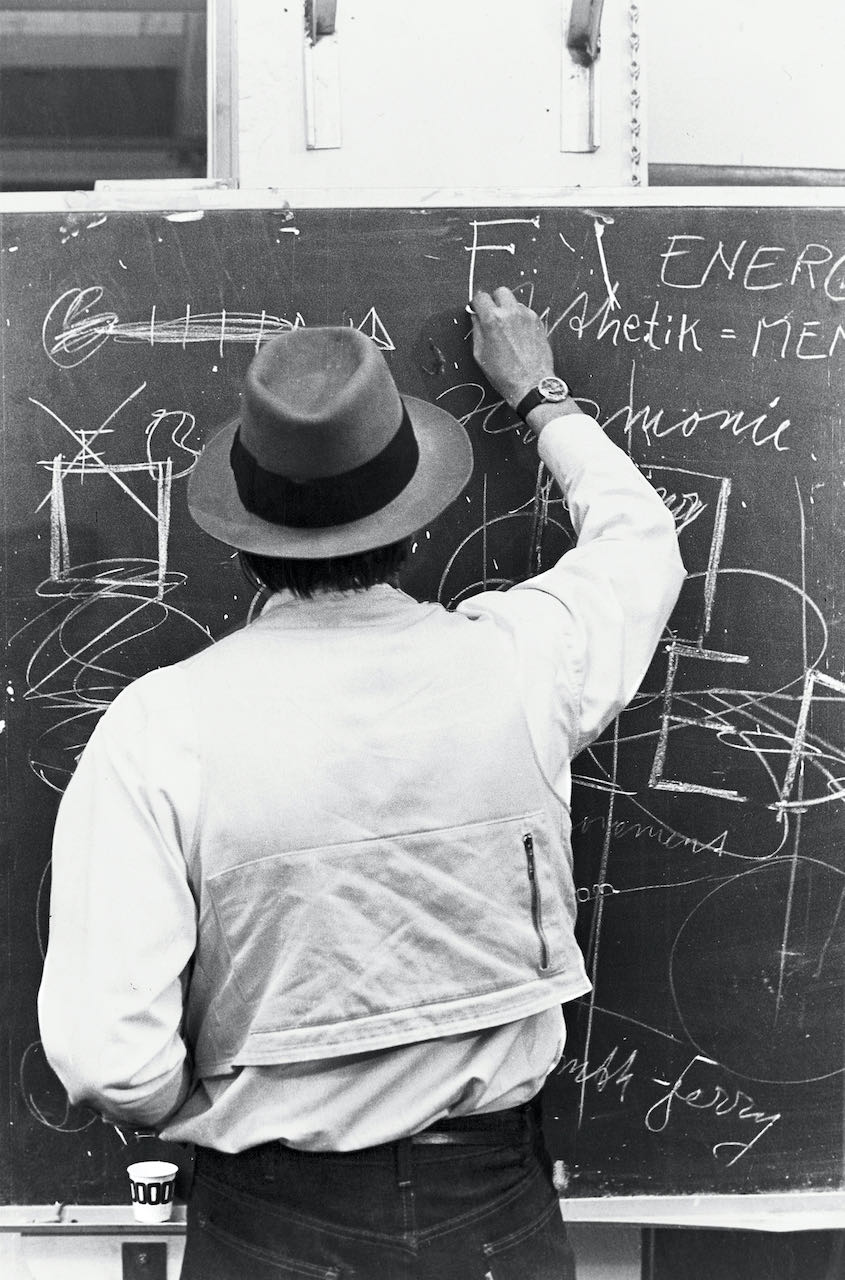 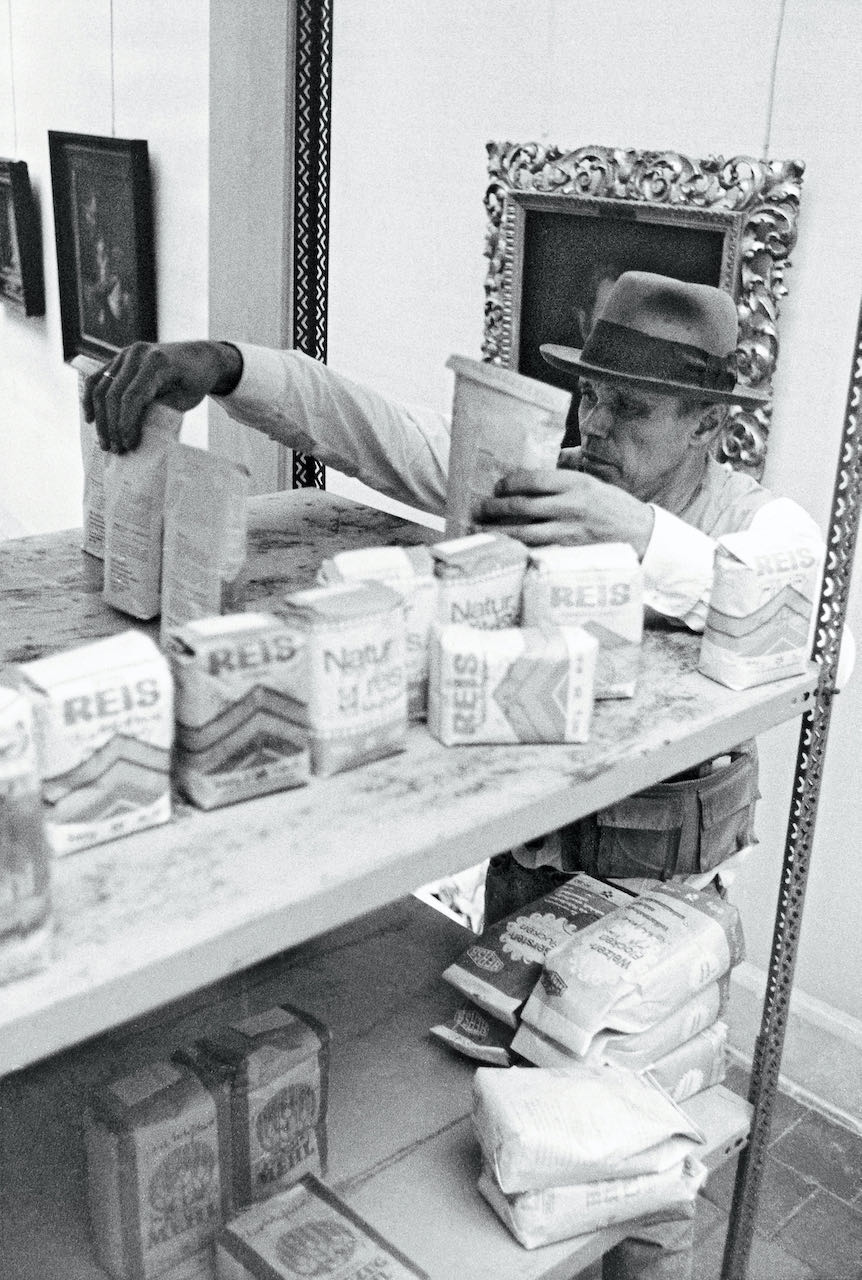 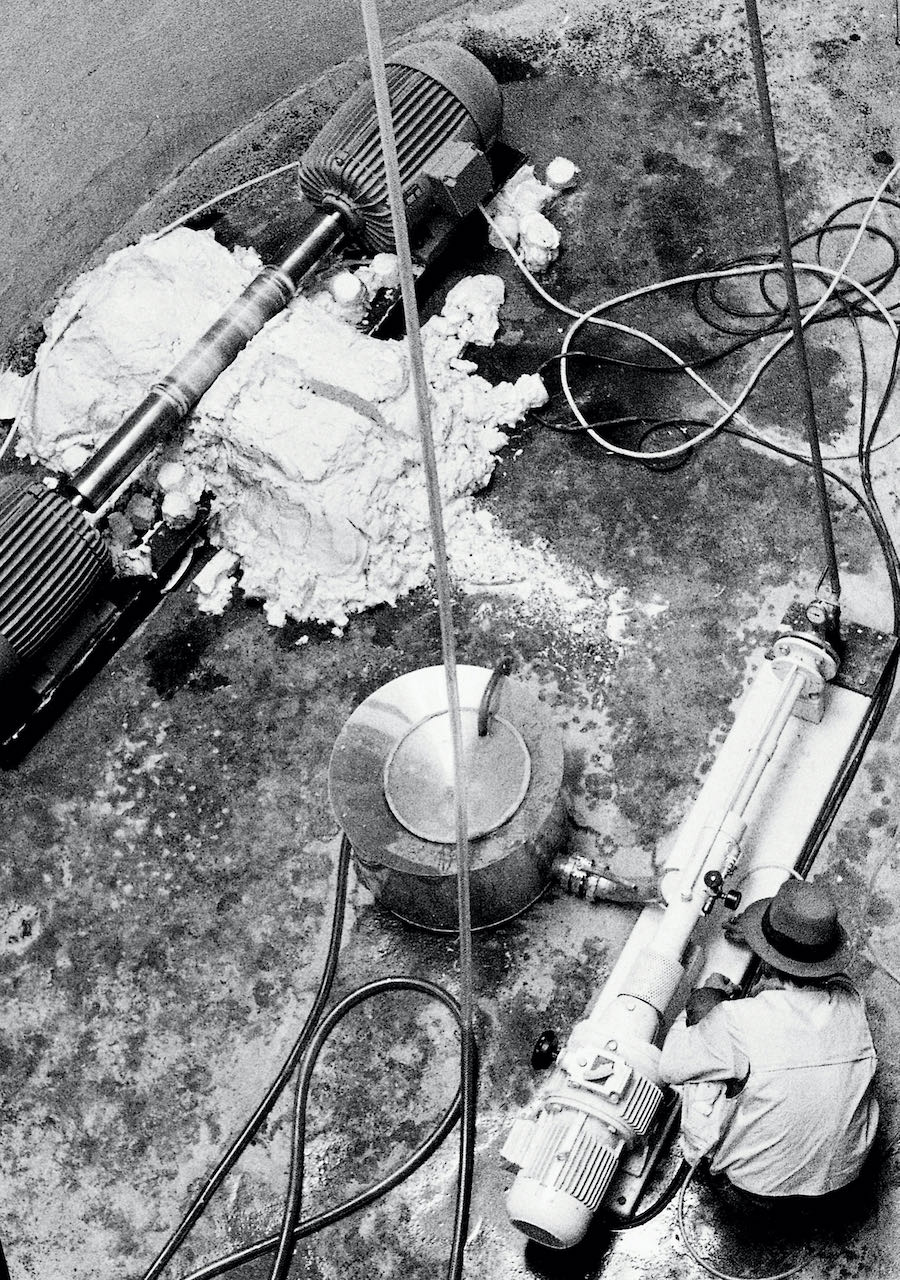 The second volume documents Beuys’s Periphery Workshop at documenta 6 art festival in June 1977. The photos were taken by Steidl himself and are published in a book for the first time. Periphery Workshop was one of a series of workshops Beuys staged in order to spur the debate about the intersection of politics, economy, and culture. These were part of the program to highlight the Free International University for Creativity and Interdisciplinary Research he co-founded with Staeck and others. (Beuys was kicked out of the University of Dusseldorf after he accepted fifty students that were rejected by the university to his course. He eventually sued the university and won.) Most of the photos in this volume are those of Beuys’s infamous diagrams. Beuys was not the kind of artist who cultivated a godlike, mercurial image. He liked to be in the weeds, meeting and debating with people of all sorts. He used the diagrams, often drawn on the spot, as visual aids. But it will take a very patient reader to examine all of them in detail – it would also help if you understand German.

The third volume, titled Honey is Flowing in All Directions is a record of another Beuys documenta 6 project / artwork, Honeypump in the Workplace. It did pretty much what its name suggested, pumping honey throughout documenta 6. But the real art project was again the discussions about art and society that Beuys held over one hundred days at documenta 6.

The last, but not least, is the volume titled The Principle of Economic Value documents the 1980 installation, Economic Value, in the Museum of Fine Arts in Ghent. The installation consisted mostly of packages of foodstuffs Staeck had brought over the years of his visits to the communist East Germany where his brother lived. It must have been quite the contrast to see these dour, utilitarian objects juxtaposed against the visually rich Dutch Renaissance painting. Beuys’s Marxist leanings – “Our culture is not shaped by culture, our culture is completely shaped by the powers of economics,” he once declared –  were most evident in this installation. The sentiment quoted is hard to refute, and the installation must have brought it into sharp relief. To you those packages may look quaint now, and even vaguely hipsterish, but to me they brought rather unpleasant memories of my Soviet upbringing. Because despite the undoubted flashes of brilliance of Soviet design, the world I grew up in – one that purportedly try to create a more fair economic system, as did Beuys –  remained largely gray, hard, and bland.