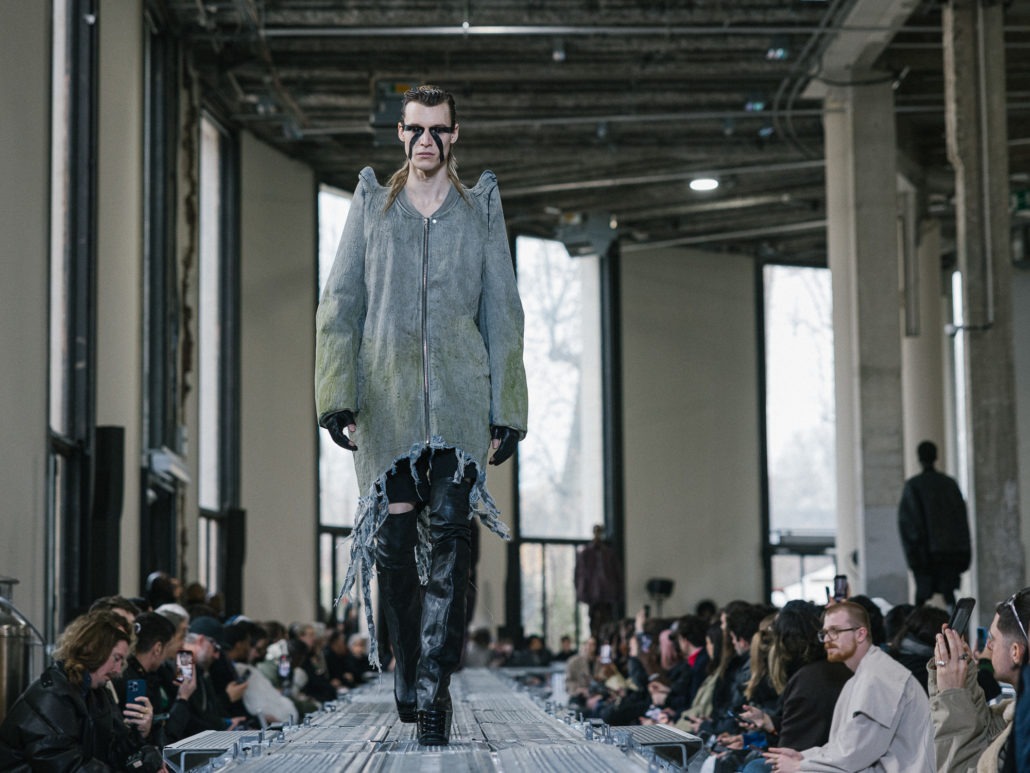 Though the fashion month started on a high note with an ethereal show of Jan-Jan Van Assche at Pitti Uomo, I arrived in Paris following a fairly dismal Milan season (more on that in the next podcast episode). Looking back on it, Paris was a mixed bag, neither a particularly strong or particularly weak season, one where expectations fell along the lines of the expected.

This time I was invited to quite a few shows of young designers, and initially I was determined to go, to keep my mind open to new possibilities. But then I didn’t, fearing I would only be disappointed. I know that this may sound narrow-minded, but I am also getting picky, and I have looked at the past shows of these brands. Few young designers today seem to muster anything beyond some sleazy queer fashion hipster fantasy they play at in their own Bushwick and Hackney enclaves, oblivious to the world at large. I saw this at Pitti with Martin Rose, and it neatly dovetailed with the show of Egonlab, the one young brand I went to see in Paris. Now, I don’t know what the equivalent of Dalston is in Paris (is it Belleville?), but I am sure the same things are worn there, some vague combination of thrifted irony that this self-elected and self-impressed club champions. Mostly what I see in clothes like that are empty gestures that are being passed off as counterculture by people who seem to be preoccupied with their looks and not much else. Count me out. Like at Martine Rose, at Egonlab there were bell bottom jeans, crop tops (on men, of course, because edgy!), and fake fur, which is polyester (so much for sustainability). Who knows what this stuff is doing on a catwalk, but if this is the best the current generation of designers can offer, you’ll have to forgive me for skipping a few shows.

What joy it was then to see Rick Owens, who has broken down so many boundaries by his sheer genius and his unrelenting and uncompromising commitment to his vision, who paved the way for a generation that now doesn’t seem to know what to do with its newfound freedom. His fashion is genderless in a considered way that only a true designer can envision. No sticking a skinny teen into a lacy top at Rick and calling it gender fluid – instead there were hard denim mid-length skirts, pagoda shoulders, and platforms and heels. Owens has fused his men with his women, giving both a healthy dose of androgyny – a word that we have forgotten and that is sorely due for a comeback. I also welcomed Owens’s return to black. There was some not unfounded criticism leveled at the collection by a couple of people whose views I respect – that we’ve seen those clothes one too many times and that Owens is due for a pivot. But I saw this collection as a continuous development of what Owens has been doing for the past four-five years. Maybe it is time to offer something radically new, but let’s not forget that Owens is peerless in doing just that for over two decades now.

That day Paris was rocked by the biggest strike in twelve years, which paralyzed its public transportation system. As I rode an electric bike from show to show (my preferred means of transportation in Paris anyway), I saw countless police vans and cops in full riot gear. I posted a picture on Instagram, and immediately “New Balenciaga Collection?” comments poured in. They were funny but they weren’t wrong. Amongst the fashion crowd, the dystopian vision Balenciaga offers was palpable. Fashion people in black cargo pants, combat boots, and tactical vests who have probably never had thought of the barricades in their lives criss-crossed the Marais, perfectly blasé of what was going on around them. It all seemed like silly cosplay.

Later that evening at Yohji Yamamoto the master treated us to another masterful collection. Just like at Owens the mood was elegiac and offered a counterstance against cultural and political polarization that we witness daily. The collection was about uniting cultures – those historically found on the vast route of the Silk Road. The message that disparate cultures have always intermingled and influenced each other – evidenced here in treatments like ikat and jacquard – is sorely overdue in a world where the cultural appropriation narrative has done an enormous amount of damage to all creativity, fashion included. I am glad to see designers pushing against it. The highlights of the collection were the multi-strap blazers in different colors and cuts. They looked as sumptuous in the showroom as they did on the catwalk. There was also a footwear collaboration with GUIDI – an artisanal brand that has been one of the StyleZeitgeist OGs. The collab consisted of three styles, including a back zip boot with a Vibram sole. It was nice to see GUIDI get the recognition the brand deserves. 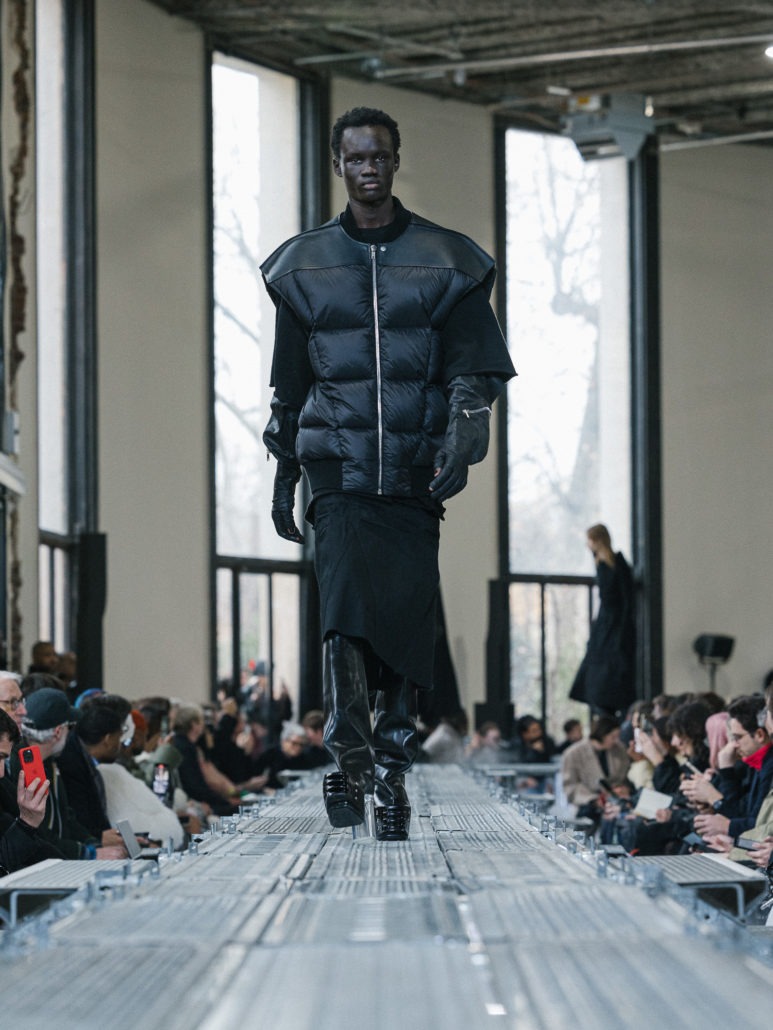 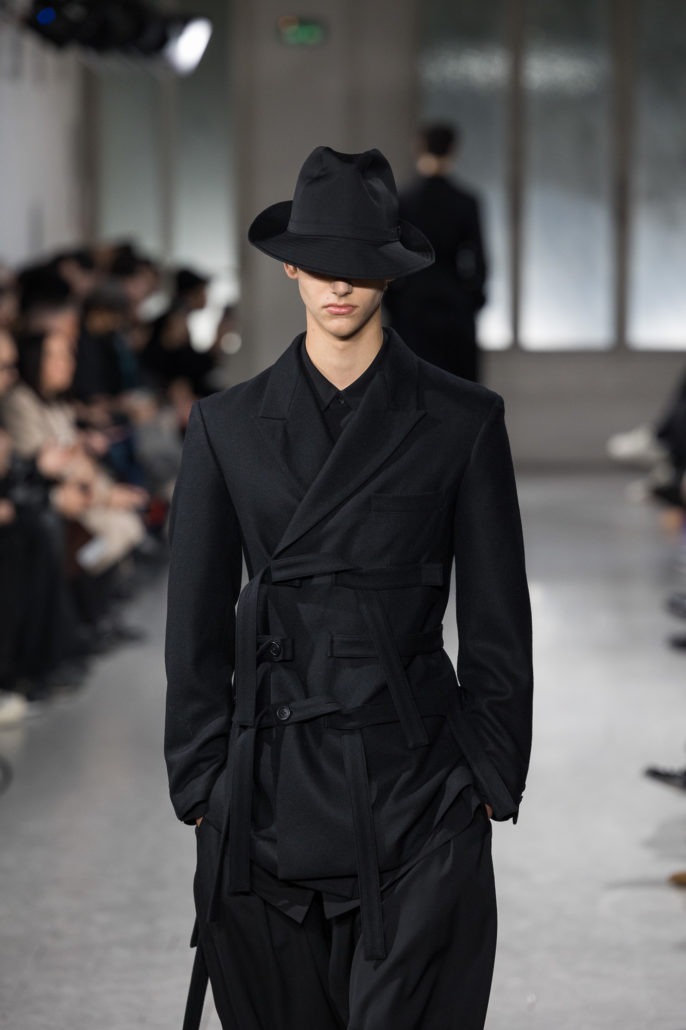 Speaking of artisanal brands from the StyleZeitgeist universe getting their due – Junya Watanabe dedicated an entire collection to a collaboration with Inneraum, a line of technical bags by our friends at the eyewear brand Kuboraum. In order to concentrate on this collab, Watanabe brought back old styles to serve as the backdrop to the tricked out Inneraum gear. For years I have publicly clamored for Watanabe to get off the workwear express and put his formidable pattern making and design skill in the service of the avant-garde community. My wishes have finally been granted and there were plenty of hard-edged, biker style clothes, most of them direct replicas of Watanabe’s legendary F/W ’06 collection. Other collabs included his usual Levi’s and New Balance, and there was just one jacket done with Palace Skateboards, which I could do without.

Later that day at Comme des Garçons Rei Kawakubo explored avant-garde tailoring, in order to perhaps gently (or not so gently) remind us of her pioneering design work. There were jackets with cutouts and fake fur, and jackets with tubular extensions. It was all fair play and fascinating to look at. I do have one fish-bone to pick with CdG, and it’s one that’s been stuck in my throat for a while. I really would like the brand to stop producing so much polyester. This collection seemed especially egregious in this sense. It’s simply becoming inexcusable considering the current state of the planet.

But I got ahead of myself, because I need to go back to Dries Van Noten who showed immediately after Yamamoto. His show – which has managed to mix horticulture and rave culture as masterfully as Van Noten mixes colors and prints – was lovely. There were beautiful garden prints, as always, some interesting graphics, and garment combinations. But somehow though the show was light and poetic, its parts did not add up to a convincing whole. I have tried to put my finger on as to why, but I am honestly having a hard time. I think it’s because I would have wished for a bit more cohesion. Van Noten is brilliant at mining a theme, but here – between the monochrome and the disparate prints that seemed underexplored in only a couple of looks devoted to each – it seemed like he was trying to satisfy too many people at once. 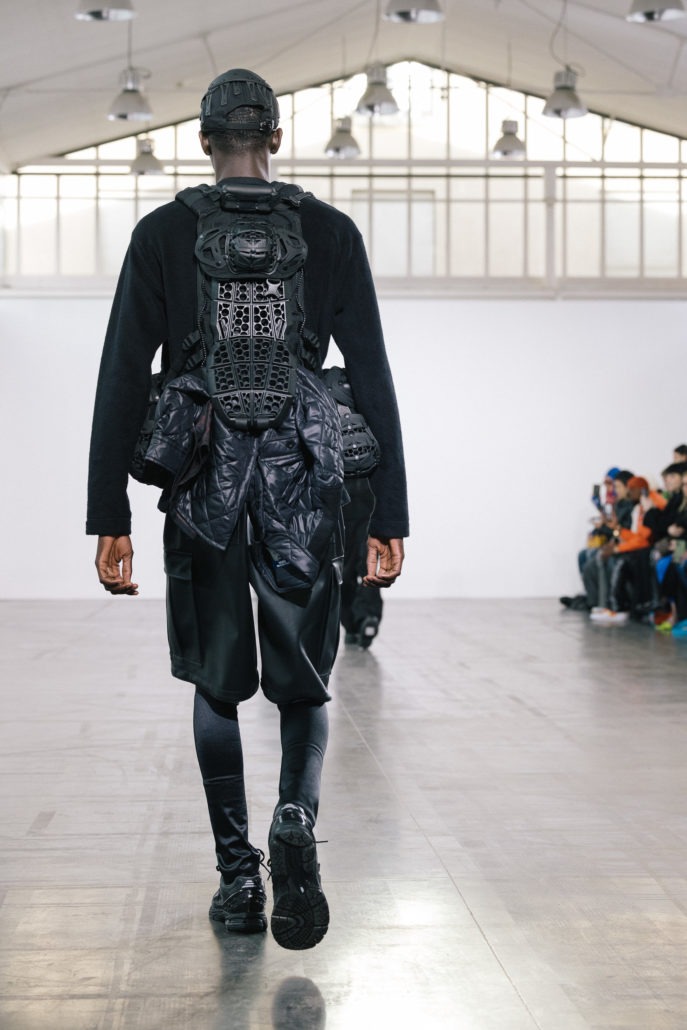 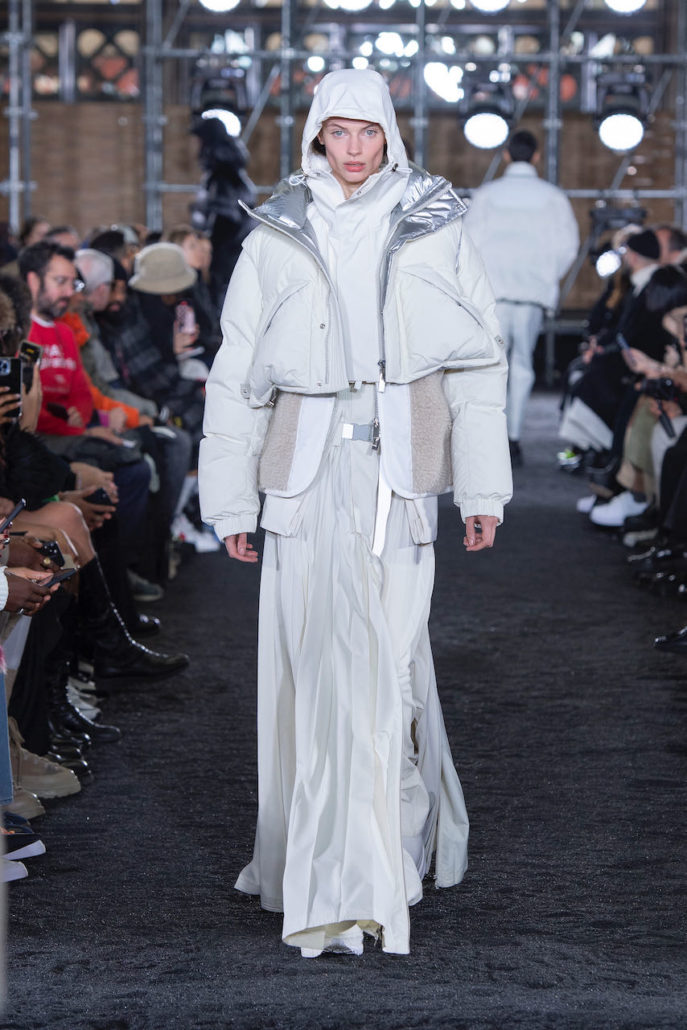 At Kolor, on the other hand, Junichi Abe showed a collection that was entirely convincing. Shown in the Espace Niemeyer, the headquarters of the French Communist Party (are they allowed to rent it out for money?) the collection was a confident exercise in Abe’s style of mashup of different garments cut into one. It was a gorgeous display of skill – deconstruction, reconstruction – that worked magically. Here was design with capital “D” – thoughtful, conceptual, and well-executed.

But before Kolor I dropped by the Undercover showroom to examine its collection. Just like with Watanabe, Jun Takahashi seems to be feeling nostalgic. The collection consisted of many elements and shapes we have seen before, but reworked in new ways. There was a collab with a cult brand Cluster. The clothes were totally fine, but nothing that set my heart racing.

After Kolor I had to criss-cross town yet again, barely making it to Hermes, but it was worth the hassle. I have always been drawn to well-made clothes, but my attraction to top notch quality has only increased in the past several years. The more I see quality drop across the board of luxury and designer fashion, the more I see today’s average fashion consumer not caring about it, the more plastic our world becomes, the more I want to experience exquisite craftsmanship, and Hermes offers just that. Veronique Nichanian is nearing 70 and has been designing Hermes menswear for 35 years, and this collection was one of her best and more modern than most. Sumptuous leather jackets with fireman closures, tailored coats with leather details, and knitwear oozed quality – the silhouette was slim without being tight. These were assured clothes for men who have nothing to prove.

My last show of the week was Sacai, and Chitose Abe delivered another knockout. This collection was largely inspired by Christopher Nolan’s film “Interstellar.” To this end there were black and white hooded looks that resembled space suits if you let your imagination wander far enough, and garments with prints referencing the film. There was also an excellent collaboration with Carhartt. In my opinion Sacai consistently produces the best collaborations, because Abe imposes her unique language on anything she touches. And so we saw 3D parkas and hybrid jackets rendered in utilitarian Carhartt fabrics, which looked absolutely rocking. I also loved the couple of dresses with asymmetric trails that were hanging down one side and looked great in motion.

On the showroom front for smaller brands, it’s been weird post pandemic. The absence of favorites like m.a.+, Geoffrey B. Small, and Forme d’Expression has put a glaring hole into my showroom schedule. But I did go see Jan-Jan Van Essche at the showroom and got to closely examine his voluminous garments in natural fabrics. On a similar note, my new discovery was a brand called Sono, run by former designers from The Row and Lemaire. That school of design was felt in the minimally processed all natural fabrics that demanded to be pet and in the easy, calm silhouettes that asked nothing from their wearer. It offered a stark and a fitting contrast to the try-hard, self-conscious fashion hipster brands that started my fashion week.

P.S. Item of the season is a long woolen coat from Rick Owens produced by the fourth-generation Italian clothier Bonotto. It is absolutely exquisite in its execution and it has that combination that I love so much – full on edge in terms of design and full on quality and tradition in terms of execution.